The 9 Global Spots You Have to Skate

The 9 Global Spots You Have to Skate

Many things can make a spot legendary – it could be an architectural extravaganza, the smoothness of the ground, the perfect height of the ledges, the fresh red paint on the curb or the history of the location – but they all have one thing in common: there's always a rider instantly associated with the spot in the mind’s eye.

Andrew Reynolds and the Bercy five, Chris Miller in the Combi Pool, Tom Penny at Radlands or Flo Marfaing at Le Dôme, it always comes down to small crews of skaters, photographers and filmers who brought the spot to the pages of your favourite magazine or video.

Here's our list of iconic spots that represent the spread of skateboarding both geographically and culturally. From British brutalism to American kitsch, these are different terrains that leave a mental mark on you once you've skated them, even if you don’t make history there!

The mother of all DIYs: Burnside, USA

The mother of all DIYs. Back in 1990, Mark 'Red' Scott, Sage Bolyard, Bret Taylor and their crew started building a bank against the existing wall underneath Burnside bridge in Portland. The main motivation behind the project was to have a dry place to skate for the rainy days; Portland's a very nice city, but receives a lot of water from the skies!

From then until today, the spot's kept evolving and is now the symbol of the ‘do it yourself’ movement in skateboarding. It was made legendary by Tony Hawk’s Pro Skater video game. Unavoidable as a skater visiting Oregon, make sure to get up the wall there and see for yourself what Germ's coffin drop-in looks like!

Scene it all before: Southbank, London

The undercroft of the Queen Elizabeth Hall, part of a culture and arts institute on the south bank of the River Thames in London, has been skated since the 1960s and has seen generations of skaters grace its banks and stairs.

This iconic spot played a massive part in skateboarding's evolution in the UK and, when it was threatened with being moved several years ago, an organised community of local skaters fought a successful campaign to save this landmark spot of European skateboarding from relocation.

With the London mayor intervening to side with the skateboarding 'remain' campaign, the spot was secured for devotees from everywhere to enjoy in the future.

In 1976, the city of Montreal in Canada hosted the summer Olympic Games and needed a brand-new stadium.

As part of the development they built a crowd entrance tunnel without knowing at the time that it would become an iconic location for skaters around the world.

It was in the mid 1980s that skaters started to hit the rounded tunnel walls: Barry Walsh and Marc Tison haven't left since and even wrote a book about it back in 2006: Pipe Friends – a visual overdose of Canada's most infamous skate spot.

When, in 2011, the city had to renovate the stadium, the tunnel wasn't part of the new plan and was about to be turned to rubble.

However, Walsh and Tison were determined to preserve Montreal's best skate playground and, after showcasing the book to the mayor and championing the significance of this otherwise unimportant architectural feature piece to a whole generation of skaters worldwide, the spot was dug out and moved 25m away to preserve it for future generations.

There was no way MACBA wouldn't make this list: the ledges, the blocks, the flat ground (which some claim gives your ollies more pop) has absolutely become one of modern skateboarding’s landmark spots.

The symbol of European skateboarding's capital city, many skate arrivals into the city still hit MACBA first to take the scene's temperature.

If you grew up skating in the 2000s, chances are you’ll recognise Kona skatepark from Tony Hawk’s Pro Skater 4 video game.

Kona is known for being the oldest privately-owned skatepark in the world still in operation, thanks to the Ramos family; it just celebrated its 40th anniversary last June. You’ll find everything you need terrain-wise in Kona, from the vert ramp and street course to the backyard pool replica, but what makes Kona iconic and unique is its massive, wide-open snake run and tombstone which survive as one of the last living connections to skateboarding’s golden era of suntans, knee socks and headbands.

The skatepark that time forgot; home to generations of skateboarders, often from the same families. Absolutely put it on your list of must-shreds and find out for yourself just how gnarly the tombstone remains, whatever generation of skateboarding you belong to.

Guangzhou is skate heaven on Earth. Block after seemingly endless block of marble plazas, hubbas and rails combined with affordable accommodation and great public transit make Guangzhou one of skateboarding’s most sought-after cities. Outside of Guangzhou city centre lies one of the most unique skateboarding spots to occur in the wild: the Red Ribbon.

Nestled in the middle of a bustling park lies this huge sculpture, shaped like a ribbon blowing in the wind. Holes throughout the ribbon prevent most of it from being skated except, believe it or not, the best part! The placement of the holes creates a perfect quarter pipe with a unique lip at the top where skaters have come from around the globe to give it their best shot. What have you got for it?

The Pink Motel pool was first introduced to skateboarders of the world in Powell-Peralta's 1987 video, The Search for Animal Chin.

The fish-shaped bowl offers perfect 10ft (3m) transitions in the deep end and has seen its fair share of ripping through the years. Built in 1946, the motel has been seen in many movies and photoshoots.

After it ceased operating as a motel, the pool was drained and became a skateboarder's playground.

The bowl has been resurfaced recently and hosts the annual Pink Motel Pool Party. If by any chance your next skate trip takes you to California, note that the pool can be rented for a session, so pull a crew together and get the party started!

France's capital has been the place to be for quite a bit of time now, thanks to the newly-rebuilt Place de la République and the Bloby's crew, who make Parisian skateboarding so hot right now.

But Le Dôme – or Le Palais de Tokyo (to use its official name) – is one of the must-skate spots when you visit.

The three-flat-three, the marble ground and the infamous hubbas first skated by Marc Haziza many moons ago all make this place unique.

Visit, acknowledge the very real height of those same hubbas, made famous by Florentin Marfaing and more recently Eniz Fazliov, and feel free to absorb some of the vast, entrancing architecture – or indeed check out the modern art museum!

Having a bubble: Landhausplatz, Innsbruck, Austria

Landhausplatz is one of those spots that makes you go: 'Damn, the architect that designed this must skate.'

Located in the heart of Innsbruck, Austria, the plaza was rebuilt a few years ago, mixing ancient buildings and a more modern approach to landscaping, with flowing forms across the plaza.

The result is a perfect, transitioned playground for skateboarders, who quickly embraced the plaza and made it theirs.

Of course, not everyone was happy about it and quickly things got complicated, with skaters ending up being banned.

The spot was so ideal that there was no way keep them away for too long, so both parties – the city on one side, and the skaters led by Manuel Margreiter on the other – met a few times to get to build an agreement which would make everyone happy.

Now, some parts of the plaza are skate-friendly, and some other parts, like the historical building stairs are skate-free. A map of the spot explaining the rules and regulations of the plaza has even been produced – that's the way to go! 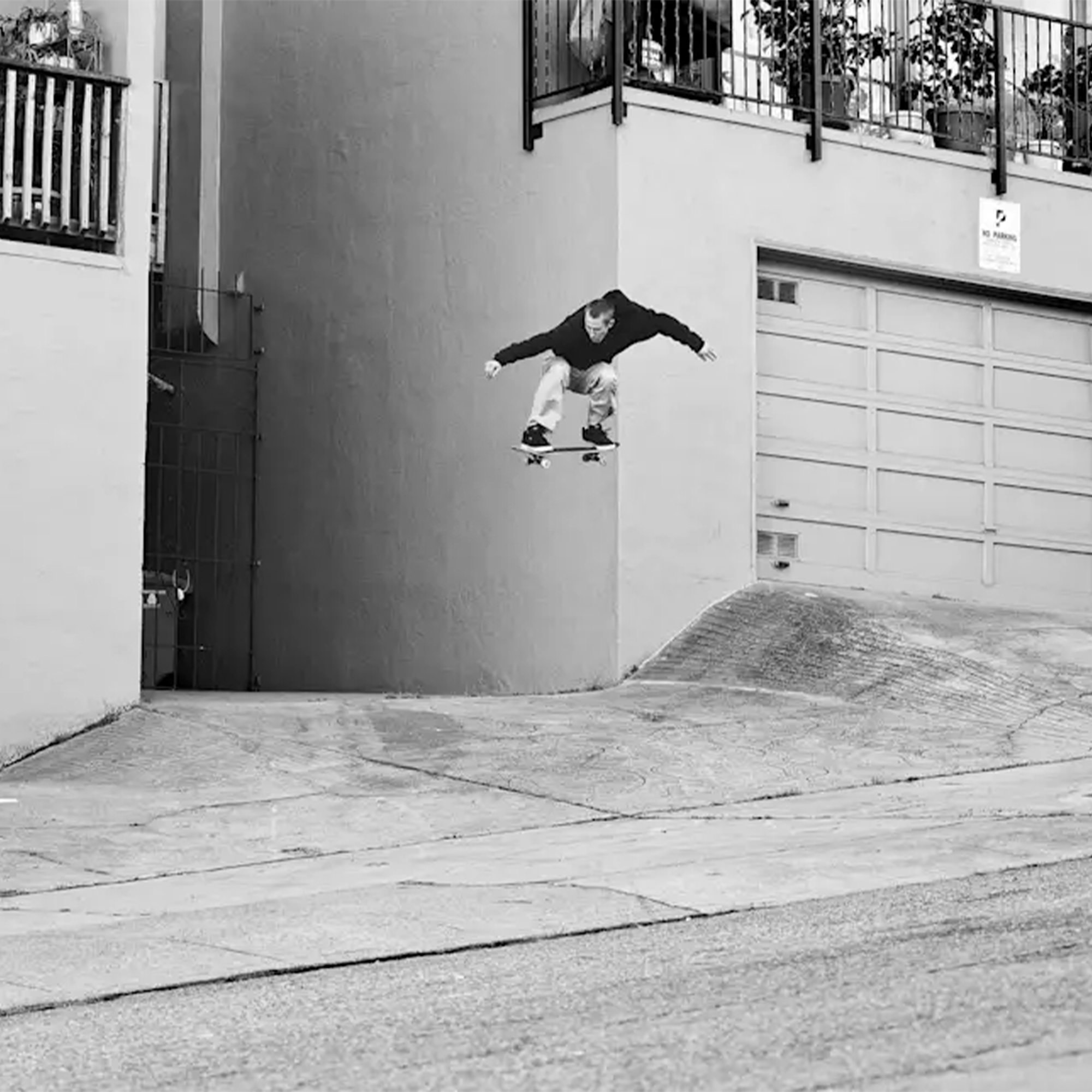