Virgil Abloh: The Designer of Progress

Virgil Abloh: The Designer of Progress

Virgil Abloh, who has died today aged 41, will be remembered as one of the most popular and influential fashion designers of his era. As both the founder of Off-White and the Creative Director of Menswear for Louis Vuitton, Ablohĺs ascent from show-crashing fashion tourist in 2009 to the very apex of the global luxury industry at the time of his passing is arguably the defining fashion story of the 2010s. For as both an African American and a creative whose work emerged from the rag-tag genre of streetwearŚa genre whose definition he regularly contestedŚAbloh was the seminal boundary breaker in a notoriously bordered business.

Ablohĺs influence, however, will also be remembered well beyond fashion. It was only six months ago that he observed in an interview: ôI operate by my own rules, in my own logic, and Iĺm not fearful.ö By 2021 that same unorthodox process that fueled his unprecedented rise in a world so often ruled by convention had led him to see his fashion design as only the by-product of a greater end. This was, as he described it, ômaking a global community regardless of the elitism or sort of territorial-ness that can happen in subculture.ö

Ablohĺs greatest product of all was the varied creation of opportunity for others to whom opportunity is otherwise routinely denied. In 2017, for instance, he created a uniform for Melting Passes, a team of recently immigrated soccer players in Paris whose lack of residency status meant they were excluded from playing in official competition, and later included them in the audience at an Off-White show. There were 3,000 students at his first Louis Vuitton show at the Palais Royal gardens in 2018. He worked to support skateboarders and surfers in Ghana, the birth-country of his parents, and provided funds to fix park and play facilities in Chicago, the city he called home.

In August 2020 he launched his Post-Modern Scholarship Fund as a progressive response to Black Lives Matter, and has since worked to raise funds and support for Black-owned businesses. He was also generous in the professional sphere, mentoring younger Black designers including the Briton Samuel Ross, and employing others within the design team at Off-White, one of whom wrote during the writing of this article: ôI owe so much to Virgil.ö

Ablohĺs generosity was fueled by hope. In that same interview six months ago he spoke of his excitement at the thought that technology could create the conditions in which ôhumanity can be a sort of utopia.ö

He added: ôAnd thatĺs why I focus on design, while Iĺm also focusing on asking what and who can I shine a light on. You know itĺs not just about making art or fashion for its own sake: there are kids in Accra who can become attached and engaged in the skateboarding community if someone builds a bridge. And there are kids in the South Side of Chicago that need education and health: how does what Iĺm doing tie into that? Whatĺs the bridge for that? Thatĺs sort of the ethos of my career. You know, I started the Post-Modern Scholarship Fund and raised a million dollars to offer assistance in the education of black students. Those things, theyĺre critical to me.ö Most recently, in July, that critical imperative in Ablohĺs thinking received the backing of LVMH, which announced that he would consult for the conglomerate at an executive level, acting to create positive disruption across the group.

Virgil Abloh was born in 1980 in Rockford, Illinois, to Nee and Eunice Abloh, who had emigrated to the United States from Ghana. When not at school Abloh developed an early passion for skateboardingŚwhich he credited with sparking his first interest in fashionŚand later DJing, which would become another key facet in his lifetime's work. While studying Civil Engineering at the University of Wisconsin and later the Illinois Institute of Technology he encountered Kanye West, another unorthodox thinker, who was so impressed that he installed Abloh as his Ĺcreative directorĺ in 2002.

During the next few years Ablohĺs many activities included launching a retail space gallery, working in the Been Trill collective alongside Heron Preston and Matthew Williams, and launching Pyrex Vision, a now long-defunct brand that is still bootlegged to this day. In 2009 he made his most personally significant launch of all: a successful proposal of marriage to his then girlfriend of a decade, Shannon Sundberg.

That was also the year that, now famously, Abloh joined West and their associates Don C, Taz Arnold, Chris Julian, and Fonzworth Bentley to attend the Paris fashion shows: West later estimated they managed to gain access to just over half of them. In the same year, Abloh joined West for an internship at the Fendi headquarters in Rome, and the year after joined Westĺs Donda project. By 2013 the designer decided to pivot from Pyrex Vision in order to focus on a fresh concept heĺd named Off-White. He shared this idea with County of Milanĺs Marcelo Burlon, a fellow spirit, designer, and DJ, who encouraged Abloh to manufacture Off-White through what would later become the New Guards group in Milan.

The reveal of the first Off-White collection in 2014 coincided with a broader shift in the currents of fashion. Responding, at first slowly, to shifting consumer desires that proved difficult to rationalize against established luxury clothing categories, houses had started tentatively offering sneakers. But a generation that habitually wore sneakers and rarely considered tailoring increasingly demanded moreŚthey wanted Ĺstreetwear.ĺ By showing pure streetwear in a fashion show context Ablohĺs Off-White breached the dam between fashionĺs ivory tower and the streetĺs more inverted forms of sneakerhead discernment. In 2015 Off-White was nominated for the LVMH Prize and by 2018, when greater seismic shifts in the menswear sector led to a four-house creative reshuffle, Abloh was championed by Kim Jones to take over the job at Louis Vuitton. Alongside Olivier Rousteing at Balmain, he duly became only one of two Black designers in the leading design role at a Parisian house.

That sunny afternoon show on June 21, 2018, was held on a rainbow runway and distinctly felt like a watershed moment in fashionŚwhich it was. After he took his bow, Abloh and West exchanged an ecstatic hug. As Vogue Runway reported: ôThe last look was a metallic silver poncho with ôFollow the Yellow Brick'' written on a breast patch. When he posted a picture of that moment on his Instagram, the caption read, ôYou can do it too.ö 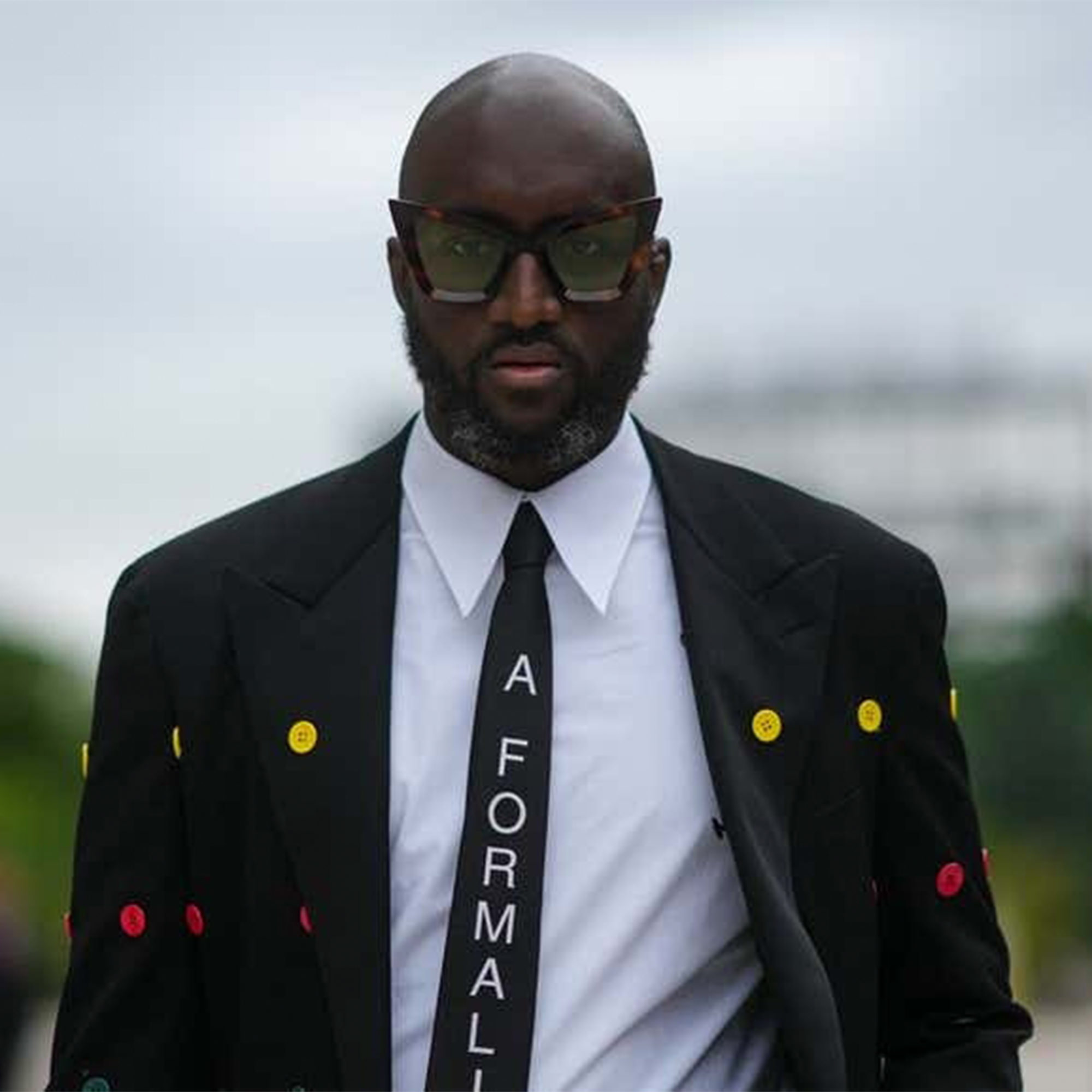