Inside the Billion-Dollar Empire Built by Skaters and Sneakerheads

Inside the Billion-Dollar Empire Built by Skaters and Sneakerheads

In the early ‘70s, skateboarders were the renegades, the badasses of the sporting world, with their innovative moves, creative vernacular, and even their unusual practice spots. Because designated skate parks hadn’t been invented yet, skateboarding gangs would appropriate abandoned or neglected backyard swimming pools. They’d drain the water, leaving a nice, smooth cement bowl for practicing tricks and freestyle moves. “Riding the pool” meant carving paths across the bottom of the cement pool.

Tony Alva, a kid from a Venice, California neighborhood called Dogtown, was being noticed for his revolutionary stunts and became the first to literally go “off the wall.”

It’s hard to overstate the influence of Tony and the Z-boys, which was short for the famous Zephyr competitive skate crew named after the surf shop run by Jeff Ho, Skip Engblom, and Craig Stecyk. Fans agree the Zephyr team changed the course of skateboarding when they competed in the Del Mar National Skateboarding Contest in 1975.

Tony and the rest of the Z-boys developed a crowd-pleasing, low-to-the-ground style inspired by surfers that was in marked contrast to the straight-up skateboarding style that had been so popular in the 1950s and 1960s. Jim Muir, one of the original Z-boys, points out that the “attitudes we created in our approach to surfing translated from the water to the land.” Surfers and skaters also shared a culture and a personal look, inspired by both graffiti culture and their individual backgrounds, that set them apart.

To pull off his most daring, now widely imitated aerial move, Tony had to gather speed to work his way up a vertical wall to the rim of the pool. Using momentum to defy gravity, he would grip the front of the board just as he launched himself straight up and off the pool deck into thin air. Then he’d rotate his board and swoop back down the side of the pool.

As the story goes, the first time Tony pulled it off, Skip Engblom exclaimed, “Man, you just went off the wall!”

As an American idiom, “off the wall” had been around for decades. But when it was picked up by other skaters, the phrase caught on as slang, evolving to mean something new and maybe strange or even a little nuts. Say what you will: to me it screamed opportunity, a chance to push things to make the most of every moment. It captured Vans’ spirit and became Vans’ anthem, mantra, and rallying cry.

Looking back, I see that part of my company’s success was that willingness to go “off the wall,” from Day One. We were always speeding forward into the unknown, trusting that skill and agility would bring us safely back to earth.

Until the skateboarders came along, Vans had no real direction, no specific purpose as a business other than to make the best shoes possible. When skateboarders adopted Vans, ultimately, they gave us an outward culture and an inner purpose. In so many ways, they were our people.

For Vans, the seventies were a groundbreaking decade in more ways than the mere numbers of our stores and the accumulating profits. My own exposure to a wider world began to broaden, as did the way I viewed the business of athletic shoes.

The year 1972 proved to be a turning point for our business, and it also happened to be a defining moment for the world’s biggest athletic event, the Olympic Games. That year, the Games were to be held in Munich for the first time in modern Germany’s history. My friend John Corda wanted to go back for the occasion, and my brother Jimmy and I decided to join him.

As we traveled, I couldn’t help noticing that almost no one wore sneakers in Europe when they weren’t engaged in sports. Back home, we wore tennis shoes year-round. We lived in them. Worked in them. Played in them.

For a week, the three of us were consumed by glorious human battles of endurance and strength in competition after competition, but our attention always drifted back to shoes. After Mark Spitz won his seventh gold medal and he’d waved to the crowd with a pair of Adidas, there’d been a hubbub over the spontaneous product placement: had he meant to promote a German-made shoe? As it turned out, Spitz had not been paid by Adidas. He wasn’t shilling.

There were also a fair number of the athletes wearing a new brand of more casual running shoe when they weren’t competing but just walking around: Nike’s “moon shoes,” one of that company’s earliest and most iconic. Turns out that earlier that year, Phil Knight had handed out the shoes to five runners at the 1972 Olympic trials in Eugene, Oregon. I didn’t know how many of Nike’s twelve styles were being worn competitively, but the Nike Cortez had been released the year before, and the distinctive look of these track shoes had already set them apart.

Our Olympics experience came to an abrupt end, and the Games themselves were forever changed, in the second week when a group of Palestinian terrorists took a group of Israeli athletes and coaches hostage, demanding the release of Arab prisoners held in Israel. After the whole tragedy had fully played out, twelve people were dead. The remainder of our journey was a melancholy one.

Going All In on Action Sports

Back in California, I started thinking about what I’d seen at the Games. Vans had never designed shoes to wear in sports competitions like track and field, baseball, or basketball. If anything, Vans were usually on the feet of cheerleaders, drill teams, and sports fans. That was the market segment we’d gone after.

Now I had a thought: why not go back to the drawing board to finesse a new skate shoe, one that more specifically addressed the needs of skateboarders?

In working occasional stints at all of our retail stores in the late sixties and early seventies, I knew that the Authentic, our style no. 44, had a loyal following among street athletes. They preferred Vans’ double-thick sticky sole to other shoes. The general consensus was that Vans’ soles let skaters “feel” the board under their feet; the soles also stuck to their boards and helped them steer. The skaters also loved the fact that because it was twice as thick, Vans’ soles lasted twice as long; and now, when they finally wore it out, they could come into a Vans’ store and purchase one shoe at a time. Wearing one color shoe on the right foot and a different color on the left, or sometimes two entirely different styles, became a badge of honor.

Tony Alva and Stacy Peralta represented the core of the now-legendary Z-boys. When they showed up with navy blue Vans Authentics on their feet as part of their signature uniform at skate-boarding competitions, we noticed. But we couldn’t have known that the Z-boys would change Vans’ entire trajectory as a company.

We invited Tony and Stacy down to Orange County to show us their moves and to talk about shoe design. My son Stevie was enthusiastic about creating a partnership. To gain some street cred for Vans along with some good publicity, he’d already suggested giving free shoes to the top skateboarders, and I’d agreed. Stacy Peralta, Tony Alva, and another star skater, Jay Adams, were the very first skaters to get shoes from a shoe company—as Stacy puts it, “giving scruffy skateboarders free shoes was unheard of in the 1970s.”

With the top athletes in the sport next to us telling us exactly what they needed to perform better, and a bunch of other athletes who wanted what these pros had, we were confident that if our collaboration didn’t meet with success, nothing would.

Stacy Peralta puts it this way: “Vans is one of the greatest legacy companies not only in skateboarding, but in the worldwide community of action sports.”

Vans’ first skateboarding shoe, style no. 95, introduced in 1976 and named the Era, was different from the no. 44 Authentic deck shoe in that it had a padded collar for extra comfort around the ankle and heel. Originally made in Tony’s signature two-toned red and blue, we soon offered Eras in different color combinations.

Even our logo began to evolve thanks to the skater influence. At the time, Jimmy’s son had been learning how to stencil art in his eighth-grade art class, and he spray-painted a stencil of a turtle on the bottom of his skateboard. Jimmy liked the look and picked up the artwork as the basis of a new logo. We designed a little red label with the silhouette of a skateboard printed on it that resembled Mark’s turtle, with the slogan “Off the Wall” written across the board, and put it exclusively on the heel of the Era. At the bottom, we added later, “Made in the USA.” 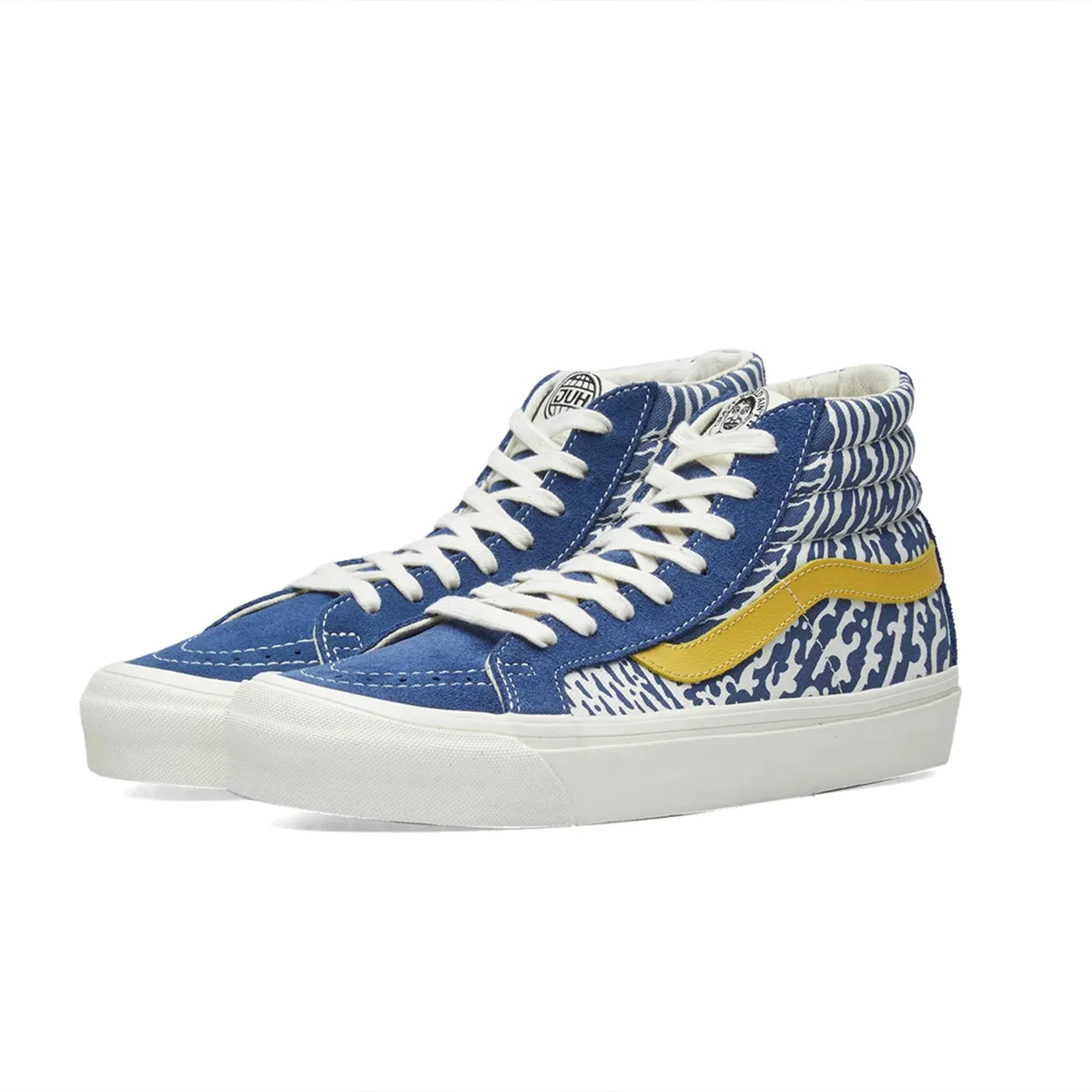