Are You Too Tall to Skateboard? I Don’t Think so

Are You Too Tall to Skateboard? I Don’t Think so

There tends to be this widespread belief that tall people cannot skateboard. Skate forums have no shortage of aspiring skateboarders asking, “Am I too tall to skateboard?” People over 6 feet are particularly concerned about their chances.

How Does Height Affect Skateboarding?

Skateboarding is all about physics. Skateboarders look like they are defying gravity! To the uninformed, it is practically magic. Skaters don’t defy gravity though, they use it. skateboarding involves using physics to your advantage.

There are no height or weight limits in skateboarding. It just takes hard work, practice, and plenty of falls.

The Building Blocks of Boarding

How do skateboarders use physics? It isn’t about having an advanced science degree. It’s just about using gravity and momentum.

For example, consider the Ollie. The Ollie is one of the most basic skateboard tricks. It’s the foundation of many more complicated tricks.

An Ollie is a jump, in the simplest of terms. It is a jump wherein the rider and the board becomes airborne without separating. It’s the foundation of many more complicated tricks.

We all know an Ollie when we see one. The awe-inspiring part is how the board seems to be glued to the boarder’s feet. A skater can be several feet in the air and yet they never lose their board.

How does it work? An Ollie is all about working with gravity and your center of gravity or mass.

Three forces work together in an Ollie: the weight of the rider, the force of gravity on the skateboard, and the force of the ground pushing up.

When these forces combine, they balance each other out. There is no net force as a result. Because of this, the board doesn’t gain momentum but rolls along with the skater.

Try balancing a pencil on your finger. You can’t balance it on the ends of the pencil. You have to work with the middle or its center of gravity.

How would you balance a human on a hypothetical giant finger? You’d center the body. For most humans, the center of gravity is somewhere around the belly button.

Tall skateboarders have to offset their higher center of gravity. The right equipment and a lot of practice will help with this.

Skating is neither easy nor more difficult for taller people. Still, that doesn’t mean the tall aren’t at a disadvantage. As it turns out, taller athletes tend to get injured more.

Dr. Eeric Truumees, an orthopedic surgeon in Texas, once discussed the dangers of being active while tall. In an interview with Huffington Post, Dr. Truumees revealed that taller people are more injury-prone.

Beyond being prone to injuries, tall people usually suffer worse damage than their shorter counterparts. Why? Truumees explained that studies have shown that tall people may have slower reaction times.

Taller skateboarders are more likely to fall, thanks to their height. Likewise, they also have farther to fall, meaning a higher chance of severe injury.

Proper equipment can decrease the chances of a serious injury. Helmets are a must at all times. You also need to have the correct skateboard for your size.

Skateboarding with the right skateboard makes all the difference. When choosing a skateboard, take into consideration your height and in extreme cases your shoe size.

A tall person can’t just pick up any skateboard and start rolling. Skateboards come in different deck sizes that correspond to height.

A mini deck is suited for younger and shorter riders. Only those 4’6” or shorter should be choosing a Mini. A Mid-sized deck is for skaters that are between 4’6” and 5’6”.

Most full grown adults can ride anything between 8.0" and 8.5" or even 9" if you want max stability, it can accommodate skaters over 5'6".

It’s best to wear shoes suited for skateboarding. “Skate shoes” aren’t just a fashion statement. They are specifically designed to fit better on skateboards. This includes Converse shoes as well, believe it or not.

When comparing your shoe size to a deck, keep in mind that it’s not really a big deal. Sure if you have huge feet a wider deck might be a good idea but in most cases it doesn’t really matter. The deck just shouldn’t be too narrow. Go to your local skate shop and try a few before you buy. Get a deck that feels the most comfortable.

Taller people generally need wider and longer boards. The width of a skateboard should be proportional to the rider’s height. Therefore, taller riders need wider boards.

Who is the Tallest Professional Skateboarder?

Currently, the tallest professional skateboarder is Ron Whaley. He tops out at an astounding 6’ 6”.

Whaley has been active in the industry since the 1990s. As of 2020, he spends his time designing skateboards for the Santa Cruz skateboard company.

What about skateboarding? Whaley is still active but mostly posts videos of tricks on his social media now.

In an interview with Big Brother magazine back in the early ‘90s, Whaley poked fun at his extraordinary height: “I think that’s one of the reasons why I’m pro for sure. It’s just the fact that I’m the tallest one. It’s a novelty”.

While that statement is obviously a joke, Whaley definitely has gained notoriety for his stature. While he may be the tallest, he’s not alone. Mr. Whaley has plenty of tall colleagues who have had no issue becoming professional skateboarders as well.

Fear not, some of the greatest skateboarders ever are very tall!

Even non-skaters recognize the name Tony Hawk but not when they run into him (it’s an ongoing Twitter joke). Tony Hawk is over 6 feet tall. In fact, he is 6’3”.

Height was never a hindrance for this star. Hawk began skating at age nine. He managed to land his first sponsorship at the tender age of 12.

In his illustrious career, Hawk has won more than 70 competitions, including gold medals at two X Games. He even broke world records by becoming the first skateboarder to perform a trick named the 900.

Hawk officially retired from competitions in 1991. He still skates for leisure. Before retirement, in his free time, he managed to found several lucrative businesses, including a billion-dollar video game franchise.

Andrew Reynolds is known as “The Boss” in skating circles. His height probably contributes to that reputation. At 6’2”, he is certainly a commanding presence.

After high school graduation, Reynolds was approached by Birdhouse, Tony Hawk’s skateboard company. He soon left behind his old life to pursue a life of skateboarding in California.

It wasn’t long before Reynolds was receiving recognition. In 1998, Thrasher magazine named Andrew Reynolds its Skater of the Year. Reynolds was only 20 years old.

Skateboarding is a fun physical activity. It keeps you active, but it has a great social component as well.

No one is too tall to skateboard. Skateboarding is for everyone! Take a visit to your local skate park and you’re sure to see all shapes and sizes.

If your height has been holding you back from trying skateboarding, it’s time you tried it. Be sure to select the right skateboard for you to reduce your risk of injury. 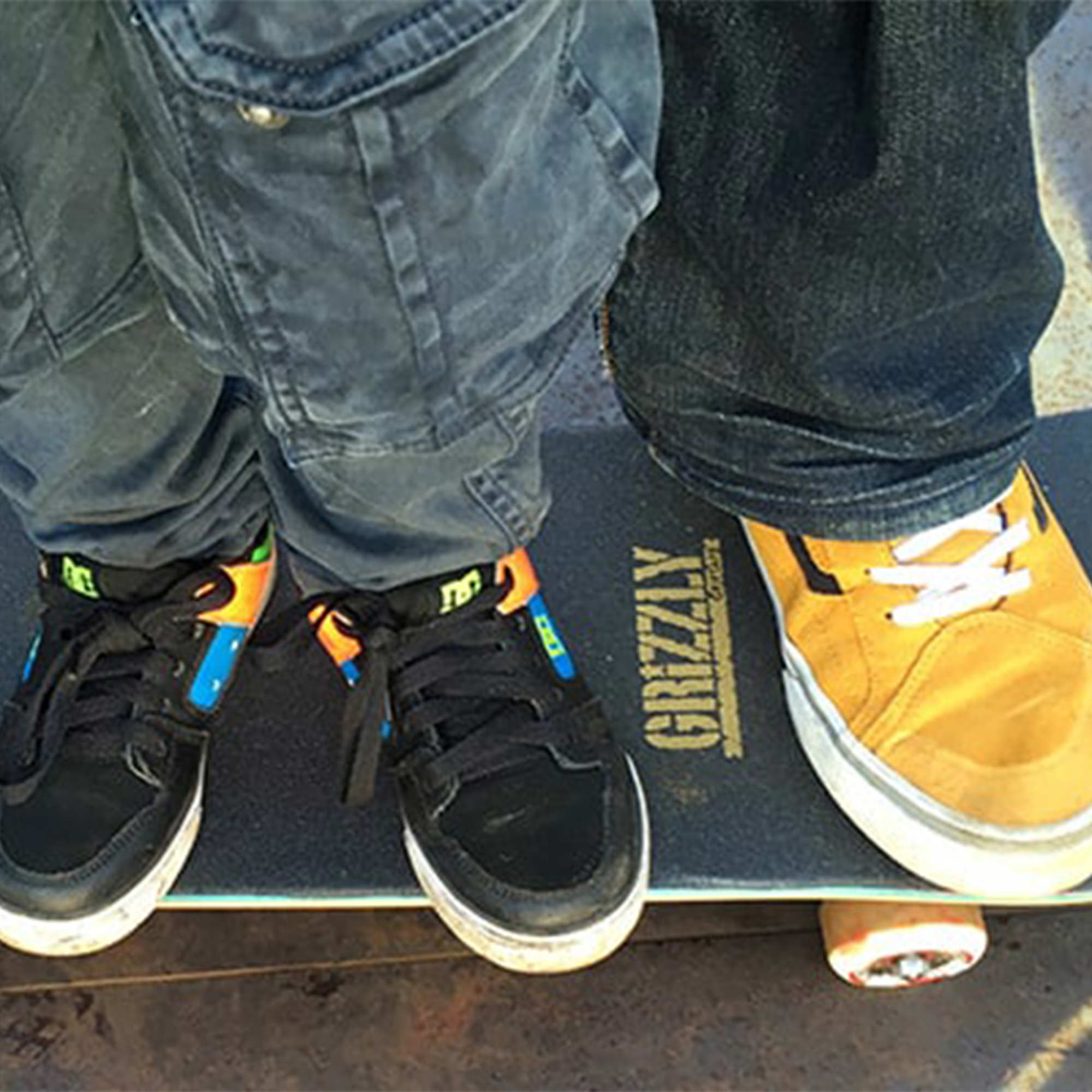