In January, after a few attempts the previous days, Tony Hawk landed a 720 ľ a skateboarding trick involving two full rotations mid-air. Hawk is widely understood to have invented the 720, a move he has performed many times during his career. But this time, as he wrote on Twitter, it ôwas a battle ů I canĺt imagine doing any moreö.

Iĺm speaking to Hawk from his car. He is on his way home to Encinitas, California, having just wrapped a snowboarding trip in Mammoth Mountain. At 53, itĺs not that heĺs physically incapable of performing the trick again, he says, but that ôthe riskö ľ think a broken pelvis and teeth knocked out ľ ôversus the reward will not be worth it in years to comeö.

Hawk is a busy guy. Looking at his Instagram page, it would seem his schedule ľ speaking on podcasts, juggling meetings, taking trips and visiting events ľ comes easy to the man who has made a lifelong career from skateboarding. But it isnĺt. Iĺve witnessed the hours that it demands up front: I spent some time around him and his family during a trip to California with my boyfriend ľ also a pro skateboarder ľ and it was clear that Hawk is pretty much always on call.

But one other thing was clear: the man really does just love skateboarding.

If you grew up in the 1990s, it is almost impossible for you not to know him. The most famous name in skateboarding, he invented 89 vertical tricks, won more than 70 contests, and even guest-starred as himself on The Simpsons. His hugely popular video game series saw him pick up a Teen Choice Award, and his cameos in the show Rocket Power and film, Lords of Dogtown speak to the influence of his name in the industry.

But fame was never Hawkĺs aim. Growing up in San Diego in the 1970s, Hawk was bound to get on a board. His older brother, Steve, was an outstanding surfer who skated frequently and kept boards around the house.

Out of curiosity, Hawk tried his luck, eventually using skateboarding as a means of transportation to and from school. But it was photos of skaters from a magazine that set him on a new path. ôI was flabbergasted by what I saw ľ literally [skateboarders] flying in and out of swimming pools and I just thought, ĹI want to get to that level. I want to learn how to do that,ĺö he says. Little did he know, one day he would be competing against those same skaters, names such as Steve Caballero, Eddie Elguera, and Billy Ruff.

At the time, learning unique tricks wasnĺt the norm; skating was more focused on style and how high one could go. But Hawk enjoyed maneuvering his body and board in new ways, setting him apart from many in his cohort. He was also learning to play the violin, which involved additional practices after school and extracurricular concerts on the weekends: ôAt some point I told my music teacher that Iĺm skateboarding and competing on the weekends, and he flat out told me that I have to choose violin or skateboarding.ö

He chose the latter.

After a couple of years of moving up the ranks in competitions, Hawk went pro at 14. And almost four decades later, Hawk can claim he took skateboarding mainstream.

Not that he would: ôI never think of it in such personal lofty terms. Iĺm happy if whatever Iĺve done has raised the profile of skating and has maybe changed the stigma that skating is for outcasts, losers and whatnot.ö

Instead, Hawk likes to think of himself as a skateboarding advocate, and someone who just helped it along. Aside from his talent on the board, Hawk is embedded in numerous projects that prioritize the intersection of skateboarding and community. His foundation, The Skatepark Project, helps build public skateparks in underserved communities. The non-profit directly contributes to diversifying a sport that has historically lacked inclusivity in its earlier days. Individually, Hawk is always supporting skaters in need, most recently helping a skater get prosthetic legs.

Today, skateboarding looks different to when Hawk was getting started. You can find anyone at the skatepark despite their gender, sexual orientation or ethnic background. More women are going pro, and this year the sport will make its Olympic debut in Tokyo.

During the pandemic, learning to skateboard saw an unlikely boom, as the practice can take place safely outdoors and alone. And with more facilities and skateparks popping up left and right, coupled with major fashion collaborations like Louis Vuittonĺs first skate shoe with Lucien Clarke, skateboarding is more embedded in popular culture than ever before. ôEveryone skates now, or has some attachment to it, or has some interest in it. Itĺs woven into the fabric of youth now,ö Hawk says.

But members of the skateboarding community have differing views on skateboardingĺs mainstream facet. Some people have labeled Hawk as a sellout because of his endorsements in the early 2000s with brands like McDonaldĺs, Mountain Dew and Bagel Bites. Others have frowned upon the unspoken sentiment that he popularized skating as a competitive sport, rather than as an art form.

Popularity and success always open the door for scrutiny, and as Hawk tells me about fame, ôitĺs like youĺre living under a microscope and anything you do or say can be misconstrued or taken down a rabbit hole.ö What few realize is his role in the future of skateboarding, simply through the relationships he holds with young, upcoming skaters. Often opening his home, which has a bowl in the backyard, and his private warehouse which features a 13.5ft vertical ramp and a street/flow course, Hawk is hoping to inspire the next generation.

Thatĺs how I got to spend a bit of time with him, when my boyfriend spent a month skating with him and his sons. ôI just love that I still get to be in the mix, that I get to participate. Itĺs such a fun window to be in, where Iĺm way older, but Iĺm still doing it. And then I get to skate with these guys who are truly pushing limits of what I thought was possible,ö he says.

Hawk is notably free of public scandals and controversial statements. He says itĺs because he isnĺt ever trying to present a fake version of himself, which certainly reflects my experience of being a guest in his home. He is authentically himself, laughing at The Office reruns, ordering takeout quite frequently, and always up for a game of Mario Kart. ôThereĺs a machine that goes along with celebrity, where people just fabricate a certain persona and they put it out there and thatĺs what youĺre led to believe they are,ö he says.

But Hawk admits he didnĺt always get it right. ôI followed and chased my career a little too much, and gave up time with my family because of that. I wished that I had a better balance of work and family back then,ö he says. His only other regret is the carelessness that came with his worst injury: a broken pelvis during a skit for MTVĺs WildBoyz. ôThey wanted me to dress like a gorilla and skate through it. I misjudged my speed and fell from the top. If I could go back to that time, I would have been a lot more careful with what I was doing,ö he says.

It seems now Hawk really is being careful. How does it feel knowing that he wonĺt be able to perform some of his favorite tricks much longer?

ôItĺs been kind of a fun process to do them for the last time. I donĺt think many athletes get to go through that process very much because at some point theyĺre just not doing it any more, and they never had any sort of closure,ö he says. ôAnd Iĺm at a place, and more of an awareness, that I can have closure on these things.ö 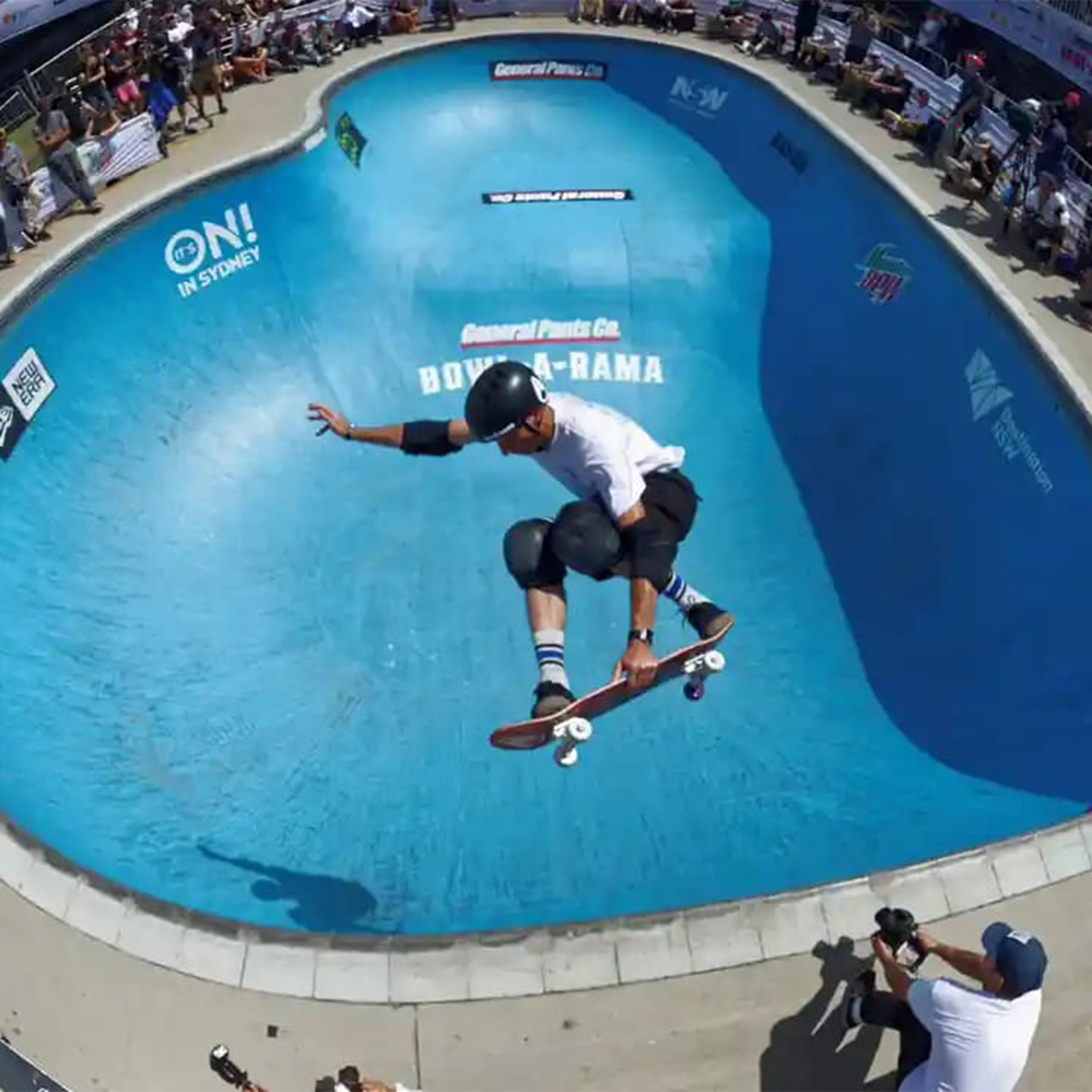