He is one of the most recognized sportsmen on the planet and one of the best all-around skaters in the sport's history.

Whether Hawk is vert skating, pulling off tricks at street level, or shredding the local skatepark, he is always on top of his game.

But business ventures have never stopped him from pushing the sport's limits and setting new heights for the Olympic sport.

Hawk believes that the biggest life lesson is the value of perseverance - trying something over and over, keeping at it, and not giving up.

He is keeping the spirit and integrity of skateboarding alive.

Discover some of the most interesting facts about Tony Hawk from his hyperactive toddler years to adulthood.

2. He has an older brother Steve, and two older sisters, Lenore and Pat;

4. Hawk was nine years old when his brother Steve - a surfer and skater himself - gave him an original blue fiberglass Bahne skateboard

5. The first time Tony picked up his brand new skateboard, he ran into a fence because he didn't know how to turn;

6. After discovering his passion for skateboarding, Hawk told his father he would not return to his club to play baseball;

8. The young Hawk was playing violin at the same time he started skating;

9. Tony got his first pair of Vans skateboard shoes at the age of 10;

11. Tony Hawk turned pro at the age of 14. Two years later, he was already considered the best skateboarder in the world;

12. He is one of the original members of the Bones Brigade, the skateboarding team created in 1979 by George Powell and Stacy Peralta, which also feature Steve Caballero, Alan Gelfand, Lance Mountain, Rodney Mullen, Mike McGill, Steve Rocco, and Tommy Guerrero;

13. After witnessing his son's talent, Frank Hawk founds the National Skateboard Association (NSA) and becomes a passionate skateboarder, too;

14. Tony Hawk won 12 consecutive NSA World Championship titles. Actually, he won all NSA trophies from its creation to its disappearance in 1991

17. In that same year, the blond sidewalk surfer won Thrasher's first Skater of the Year award;

18. Yes, Tony Hawk has a few tattoos on his arm and ankle;

19. In 1992, after almost declaring bankruptcy, TH and Per Welinder found skateboard company Birdhouse;

20. On December 6, 1992, Tony and Cindy welcomed Riley Hawk, who was named after one of Hawk's ancestors;

24. The California skate veteran once said that his first three marriages failed due to travel commitments and unbalanced time management priorities;

27. Tony Hawk is a goofy-footed skateboarder;

28. In September 1999, the famous skater launched Tony Hawk's Pro Skater (THPS), a multi-platform skateboarding game that would become one of the most successful video game series of all time;

29. Tony's favorite skateparks are Vans Off The Wall Skatepark in Huntington Beach, California, and Linda Vista Skatepark, in San Diego;

30. Also, in 1999, Hawk founded 900 Films, a video production company headquartered in San Diego that developed The RIDE Channel, one of the most popular skateboarding channels on YouTube;

31. Birdman once sent a skateboard to the surviving members of The Clash, who decorated it, signed it, and wrote "London Calling" lyrics on it. When it went up for auction, Hawk bought it back because he couldn't let it go;

34. TH's house in Encinitas, California, has a private backyard bowl and swimming pool

35. Birdman is often invited as a speaker at corporate conferences and tech summits;

36. In 2002, the legendary skateboarder founded the Tony Hawk Foundation. The organization aims at designing and building quality and safe skateparks in low-income areas where youngsters and adults can practice the sport;

39. In June 2009, Tony Hawk rode his skateboard in the Grand Foyer of the White House, in Washington, for a Father's Day celebration hosted by President Barack Obama. A few later accused him of a "disrespectful act";

40. Hawk once broke his pelvis, fractured the skull, and broke his thumb all in one fell swoop;

41. In 2011, Tony Hawk said he thinks "skimboarding is underrated. There is some raw talent out there";

43. In 2012, the skateboarding guru participated in India's first-ever vert skating demonstration in front of a huge crowd of fans;

44. Tony Hawk says that the craziest thing he's ever done on a skateboard was jumping between two seven-story buildings in downtown Los Angeles for an MTV show

45. In 2014, Tony Hawk rode a real-life hoverboard that floated a couple of inches above the ground. The experience followed a prank the skater and "Back to the Future's" Dr. Emmett Brown played with the HUVr board on the streets of Los Angeles;

46. Tony Hawk says his least memorable moment was doing a loop in a full gorilla suit;

50. Tony Hawk always plays his own character on THPS video game series because he knows his special moves, and that's how he gets the highest scores;

52. One of the most famous Tony Hawk memes is the "race war killing";

53. In 2016, Kelly Slater and Tony announced the construction of a vertical skate-to-surf spiral wooden ramp at the Surf Ranch. The idea was to have the ramp's exit driving directly into the wave's take-off zone;

55. In 2018, Tony Hawk co-founded D/CAL, a brand consultancy and creative ad agency with offices in California and Detroit;

56. In that same year, Hawk worked with Emojipedia's Jeremy Burge on the redesign of the skateboard emoji;

57. The 900-to-revert-to-manual-to-kickflip McTwist is the only trick that video game Tony can do that real-life Tony cannot do;

58. At the age of 50, Tony Hawk embarked on a quest to land 50 vert tricks he had created and/or pioneered. He obviously did it;

60. In 2020, the Tony Hawk Foundation was renamed The Skatepark Project to better reflect its mission. The philanthropic program helped fund over 900 facilities throughout the United States;

64. Hawk authored several books, including The New York Times bestseller "Hawk: Occupation: Skateboarder," "How Did I Get Here? The Ascent of an Unlikely CEO," "Between Boardslides and Burnout: My Notes from the Road," and "Tony Hawk: Professional Skateboarder";

65. The skater-entrepreneur hosted "Tony Hawk's Demolition Radio" show on SiriusXM for 15 years between 2004 and 2020;

66. Tony Hawk is the only sportsperson to have been featured in a video game consecutively on PlayStation, PS2, PS3, PS4, and PS5;

67. The transition skater says the hardest part of any trick is committing to the landing;

69. Hawk started surfing before discovering skateboard, but he admits he is scared of big waves;

70. Birdman invented many skateboard tricks, including the stalefish, Madonna, 720, ollie 540, and kickflip McTwist;

71. TH lobbied for the inclusion of skateboarding in the Olympic Games and even met with the International Olympic Committee (IOC) in Lausanne, Switzerland;

73. The most unusual Google searches involving Tony Hawk include "how many bones has tony hawk broken," "what happened to tony hawk," "when did tony hawk die," and "why is tony hawk famous";

74. Tony Hawk is often semi-recognized or misrecognized in public. He is frequently mistaken for Kelly Slater, Lance Armstrong, and "that guy from 'Ghost'"; 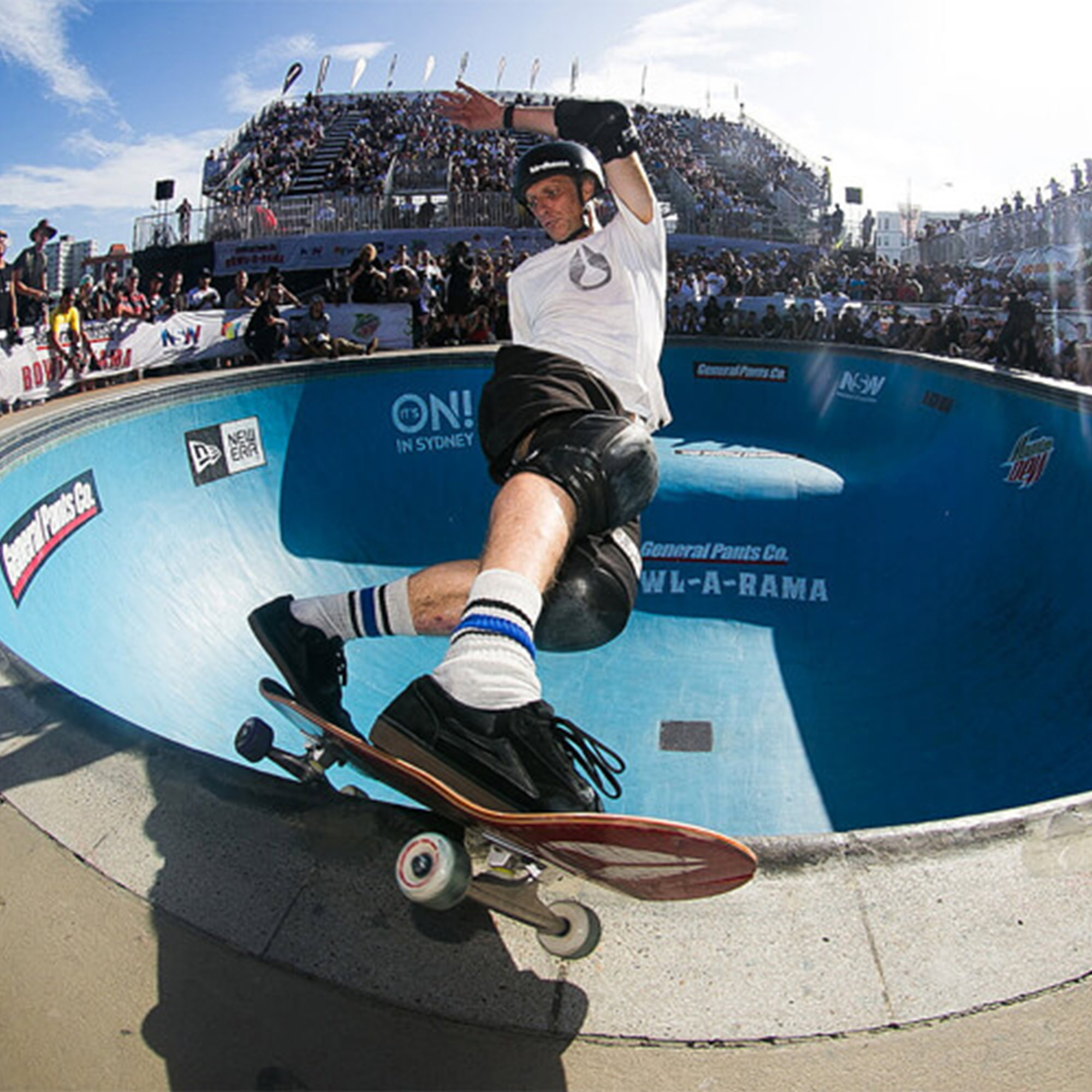