The Top 10 best skateboarders of all time

The Top 10 best skateboarders of all time

Skateboarding has been just as much of an influence on my life as music and art has. I’ve been skating for over 25 years and it has taught me the value of hard work, practice, and perseverance. I credit a lot of my success to the “never quit and always get up” mentality I learned from skateboarding. The culture of skateboarding is actually what led me to music and opened my eyes to a wide variety of artists such as Primus, the Beastie Boys, Minor Threat, Cypress Hill, Tool, the Melvins… the list goes on. In my teen years skate videos became a “handbook” of sorts on how to be cool, how to dress/act/skate/etc. Here is my top 10 list of the greatest skateboarders of all time…

Andrew was the first really young skater I saw to have his own professional skate video parts and I remember being blown away at how good he was. He was truly a natural on a skateboard from the very beginning and I grew up watching him grow and progress every step of the way. To this day I am still amazed at his ability to maintain and perform at such a high level, he’s one of the last skaters from my youth that’s just as good now as he was back then. He’s like the Tom Cruise of skateboarders – he doesn’t age, haha.

It felt like Tom came on the skate scene out of nowhere and just blew up. He had such a natural style that he made skateboarding look easy and effortless. Many of my friends and I were heavily influenced by his style and fashion, I can distinctly remember wearing cargo pants and the beanie with a hat bill on it because he made it look so cool. He was a trend setter without even trying to be. I also respect him for stepping away from the limelight when all the hype and fame around him became too much. He did it for the love of skating not the popularity.

When I first started skateboarding it was not widely accepted or nearly as popular as it is now, in fact it was even criminalized in the small town I grew up in. So when Tony Hawk started commercializing the sport with video games and clothing in big stores like Walmart and Target I was a little apprehensive to accept the change from underground to mainstream. Now it has become an Olympic sport that’s globally accepted and that’s exactly why Tony Hawk is the most popular name in skateboarding.

His game introduced the sport to an audience beyond skaters and even stretched the possibility of what could be done on a skateboard. I remember when I first saw the Tony Hawk’s Pro Skater game, I thought it was ridiculously over the top because the tricks you can do in the game were absolutely impossible, but kids grew up playing a game where they could do any trick possible to the imagination and took that mentality into reality. Now look at the sport, light years from where it started.

As much as I credit Tony Hawk for everything he’s done for skateboarding I have to give Rob the same respect. There’s a generational gap from the style of Vert ramp skating Tony grew up with in the 70’s and 80’s to street skating that didn’t really start to become popular until the 90’s. Being a street skater from the 90s, I relate more to the video games (Skate) and professional competitions (Street League) that Rob helped develop because they center more around the urban style of street skating I grew up with. He also pioneered public skateparks called “skate plazas” that consist more of stairs, handrails, benches, and ledges to represent more of a true street skating vibe verses the traditional way of ramps and bowls. Rob helped move street skating from the underground to the forefront.

I would classify Aaron as the Evil Knievel of the sport, He defies gravity and pushes the envelope on what the human body can withstand! I remember the first time I saw one of his video parts I couldn’t believe that it was even humanly possible to jump off buildings, gaps, and stairs of that height and actually roll away. He definitely takes the sport to a level far beyond What I could’ve ever imagined. Regardless of whether you are a fan of skateboarding or not you should go check this guy out and be blown away!

I think it’s safe to say there would be no Aaron “jaws” Homoki without a skater like Jamie Thomas. Jamie’s one of the original godfathers of being a daredevil. Watching his skate parts was like controlled chaos, every trick he did was insanely fast and on 10! Still to this day Jamie has one of my favorite video parts of all time in the toy machine “Welcome To Hell” video, his song selection of Iron Maiden’s “Hallowed Be Thy Name” couldn’t have been more perfect too. That became an instant classic

Speaking of classics Kris was the very first skater I saw that made me really want to pursue skating. I remember being at my friends house and him showing me the Union Wheels Right To Skate video and Kris’s style and energy captivated me right away. I remember saying to myself I wanna do that! What also caught my attention was the song that was playing on his part, so I searched the credits to find out who the band was and it said TOOL “Part Of Me”. My first reaction was “that’s kind of an odd and goofy name for a band?” But it led me to the music store where I found Tool’s first EP (Opiate). So I have to say thanks to Kris and his video part for inspiring me to skate and exposing me to great music.

What’s the old saying? “If you want to be the best you’ve got to beat the best”.ell good luck beating Nyjah, he’s like the Michael Jordan of skating. He’s so good on the competitive level that he’s won more competitions than any other skater in history and is the highest paid skater in contest wins.

Nyjah is a prime example of what the sport has evolved to. He has several high-paying endorsements including his own Nike pro model shoe and his level of success has definitely made him a celebrity in the sport.

Watching him in contests is like watching any of the greatest athletes in their prime, he’s just so consistent when the pressure’s on. Love him or hate him you gotta respect him because he didn’t get to the top without a ton of hard work practice and sacrifice.

The beauty of skateboarding is that anyone can develop their own style and identity within the sport, kind of like a musician or an artist. Daewon is definitely an artist, he goes against all conventional ways of thinking when he skates. His creative ways of using weird objects and obstacles to push beyond just the skateboard as a source of inspiration is incredibly unique and always entertaining to watch because you never know what he’s going to come up with. He’s proof that there’s no wrong way to Skateboard just as long as do you love doing it. Daewon is definitely one of the most creative skaters of our time

I think it’s safe to say without a doubt that Rodney Mullen is the godfather of street skating. He grew up in the 70s and 80s doing a style of skateboarding called freestyle before street skating ever really existed. Rodney invented a multitude of tricks such as the Ollie, kick flip, heel flip, 360 kick flip and many more that are now the fundamental foundation of street skateboarding. He’s always been a pioneer when came to inventing new tricks and ways to ride the skateboard.

Some of my favorite skate videos of all time are when he and Daewon would try to out-do each other with crazy obstacles and tricks that no one else would even think of doing. The way those two treated skating was truly a creative art form. Rodney has also gone on to do several public speaking appearances and wrote an autobiography. He’s hands-down one of the most influential creators of the sport and will go down in history as a legend of skateboarding. 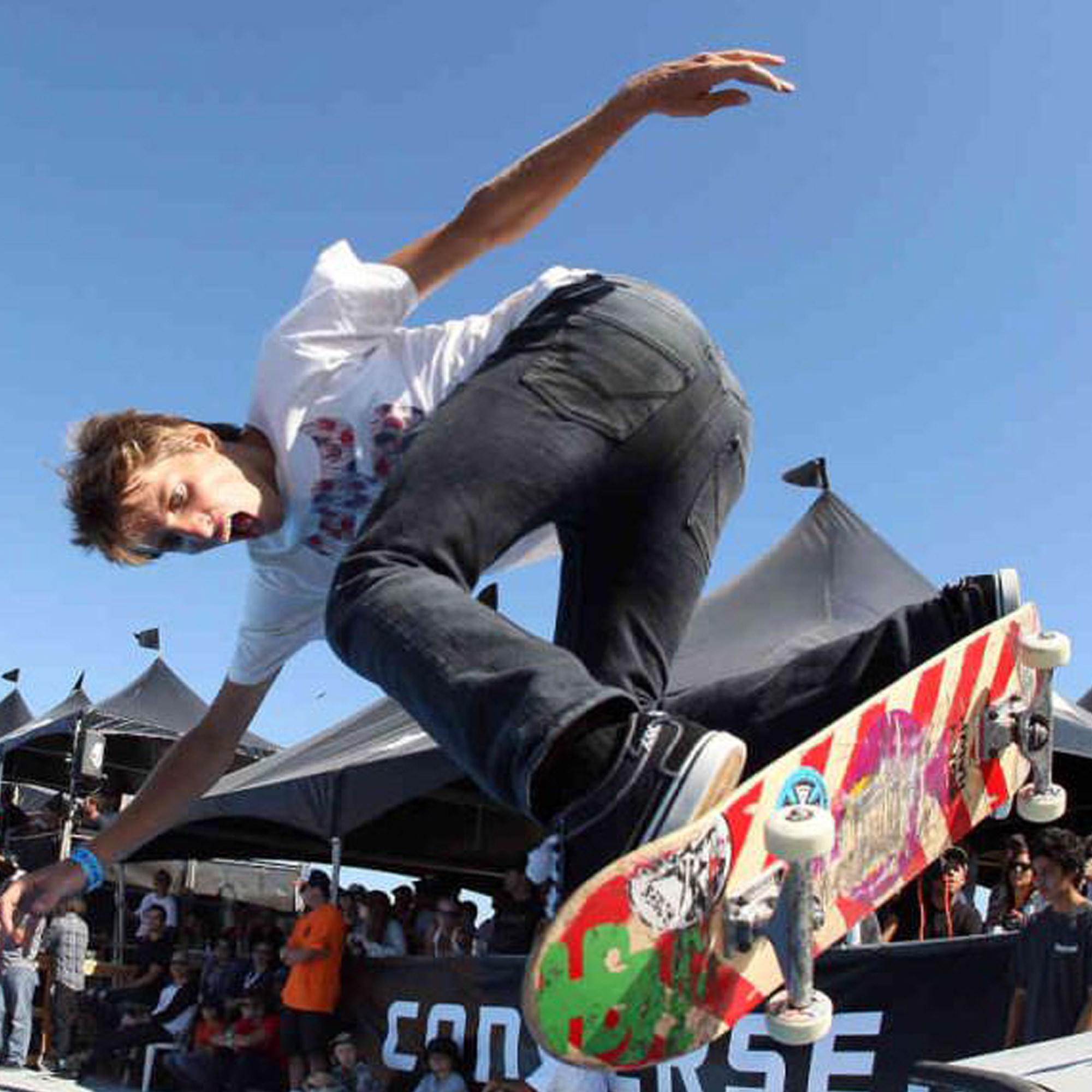