The Flourishing of Skate Culture in a Sellout Era

The Flourishing of Skate Culture in a Sellout Era

“To be a surfer... ah, to be between the sky and the water would be a wonderful thing,” Diana Vreeland said during a television interview in the nineteen-seventies. “And skateboards. They’re great! Just great,” she added. This was long before skateboarding had become a global phenomenon—but Vreeland, the late, celebrated editor of Vogue, recognized the sport’s power. Even she, a fashion-magazine editor in her seventies, understood the fantasy generated by a twenty-eight-inch piece of wood and four tiny wheels. You don’t need to nail a kick flip to understand the allure of skating. Like surfing, it’s an act of spiritual freedom expressed through the body. Plus, the clothing is comfortable.

Anyone paying attention to the movies this year knows that the fantasy of skateboarding is alive and well, not only to the young people who engage in the sport but to an army of curious bystanders, most of whom are probably older than the average skater. In August, the director Crystal Moselle released “Skate Kitchen,” a small and heartfelt film about a group of teen-age girls in New York City who find a sense of self, and solidarity, in skating. In September, a young filmmaker named Bing Liu released “Minding the Gap,” a serenely tragic début documentary. In it, Liu uses his childhood skating friends—and the copious skate footage he filmed throughout his youth—as a launchpad for a heavier study of domestic violence in his home town of Rockford, Illinois. And, last week, Jonah Hill released his directorial début, “Mid90s,” a fictional but hyper-realistic homage to the Los Angeles skate communities of his youth. Together, these films are some of the most sensitively observed works about youth and community to hit screens this year.

The skate movie began in 1965, when Noel Black’s short film “Skaterdater” was released to heaps of critical praise. Since then, skating has morphed from a small-scale subculture to a mass-market juggernaut, with nearly five billion dollars in global revenue. Hundreds of brands have tried to capitalize on the sport’s appeal, peddling shoes, clothes, and “experiential” skate-adjacent events, bolstered by the fashion industry’s newfound obsession with streetwear. Some have been more successful than others. Earlier this year, the skate-shoe brand Vans announced that it would cease to sponsor the travelling pop-punk festival Warped Tour—but that it would continue to run its House of Vans locations, and also its pop-ups for skate-adjacent events. The logo for Thrasher, the irreverent monthly magazine and longtime skate bible, is so ubiquitous on clothing worn by non-skaters that it’s become divorced from its origins. And, in 2016, Vogue launched “Skate Week,” a somewhat tone-deaf exploration of skating and fashion. (In one piece, the magazine declared Thrasher gear “every cool model’s off-duty staple.”) Skating—an eternal wellspring of fresh blood, spirited fashion, and social-media-friendly video—has always been ripe for exploitation by lame, leering advertisers hungry for a subculture that can be flattened into a “life style.”

And so what’s surprising about this year’s skate films is not their existence—Hollywood has always wanted a slice of the skating pie—but their authenticity. Each director was fastidious about letting actual skateboarders shape the film. Moselle, who’s known for the 2015 documentary “The Wolfpack”—the story of seven cinephile siblings confined, by their overbearing parents, to their apartment in Manhattan—conceived of “Skate Kitchen” when she overheard two young women, Rachelle Vinberg and Nina Moran, talking on the subway. She was seduced by their style, their skateboards; she felt the same lustful twinge that Vreeland did. But, rather than jot their conversation down or snap a photo, she cast the pair in “Skate Kitchen.” The film has a quiet, mumbly realism about it, and the girls exude a sincerity that likely couldn’t be found through a casting call. Liu’s film is a documentary about his real friends, and Hill, when he was casting “Mid90s,” took to the skate park to find the film’s stars. He also enlisted the twenty-two-year-old Mikey Alfred, the mind behind the skate brand Illegal Civilization, as a co-producer. The kids featured in “Mid90s” aren’t playing themselves, but the material is true to their experiences in the skate parks of Los Angeles. For the film’s star, Sunny Suljic—a thirteen-year-old with puppy-dog eyes and a lion’s heart—the least authentic part of the role was pretending to be an inexperienced skater.

These films serve as a testament to the growing trend of “street casting”—using “normal” people, discovered in their natural habitats, rather than those found through casting agencies or the professional acting community. Some of the best independent films of the past few years—Sean Baker’s “The Florida Project,” Andrea Arnold’s “American Honey,” and Abdellatif Kechiche’s “Blue Is the Warmest Color”—were created this way, and they make the notion of professional acting seem altogether antiquated, particularly when the characters are part of a milieu that requires a heightened degree of specificity. Stories about subculture succeed when handled delicately, and with the willing guidance of those within it.

This is especially true of the skating community, which is famously hard to please. Fitting in with skateboarders means adopting an almost constitutional resistance to corny gestures. After all, skating, as a recreational act, is relentless, toilsome, boring—it requires a commitment to drudgery and community that quickly weeds out those with impure motives. In a sellout era, it may be one of the few remaining subcultures that has resisted being swallowed by commercial appropriation. When Vogue ran “Skate Week,” it received a thrashing from skate-world insiders: “I think Vogue is fucking dumb and knows nothing about skating, and their approach was ignorant and stupid,” one skater announced in an interview. The skating brand Supreme, though now one of the most prominent fashion forces of the past quarter-century, has retained its rigorous business model, opening only a handful of retail stores and selling its painstakingly curated items in small batches despite immense demand. It’s been rewarded for this commitment, while a brand like Zumiez—the cheap, corporate bugbear of skaters around the world—continues to attract ire. When Alfred, the “Mid90s” co-producer and Illegal Civilization skate-crew founder, decided to partner with Zumiez, in 2016, he set off a small fracas over the meaning of authenticity in the skate world. He was forced to publish a Tumblr post that explained the partnership and held a mirror up to his critics: “If you would stop fucking with Civ because of a store, you didn’t fuck with us in the first place,” he wrote. Touché.

The recent burst of skate movies—particularly those of Moselle and Hill, who are genuine outsiders—were made with an almost paranoid sensitivity to the skepticism of skateboarders. “The biggest mission of this movie beyond everything else was to do everything right,” Hill said recently, on the Ringer’s “The Big Picture” podcast. “Forget critics.” If he failed to represent the world of skateboarding appropriately, the skaters, he feared, would say, “Off with his head. . . . It wasn’t, like, hey, it’s a B or a C-plus. It’s, like, We’re going to fucking kill this guy if he butchers this.” Skateboarders can smell a poser from a mile away. It’s a self-preservation instinct that breeds fear and awe among interlopers. It’s why we love them. 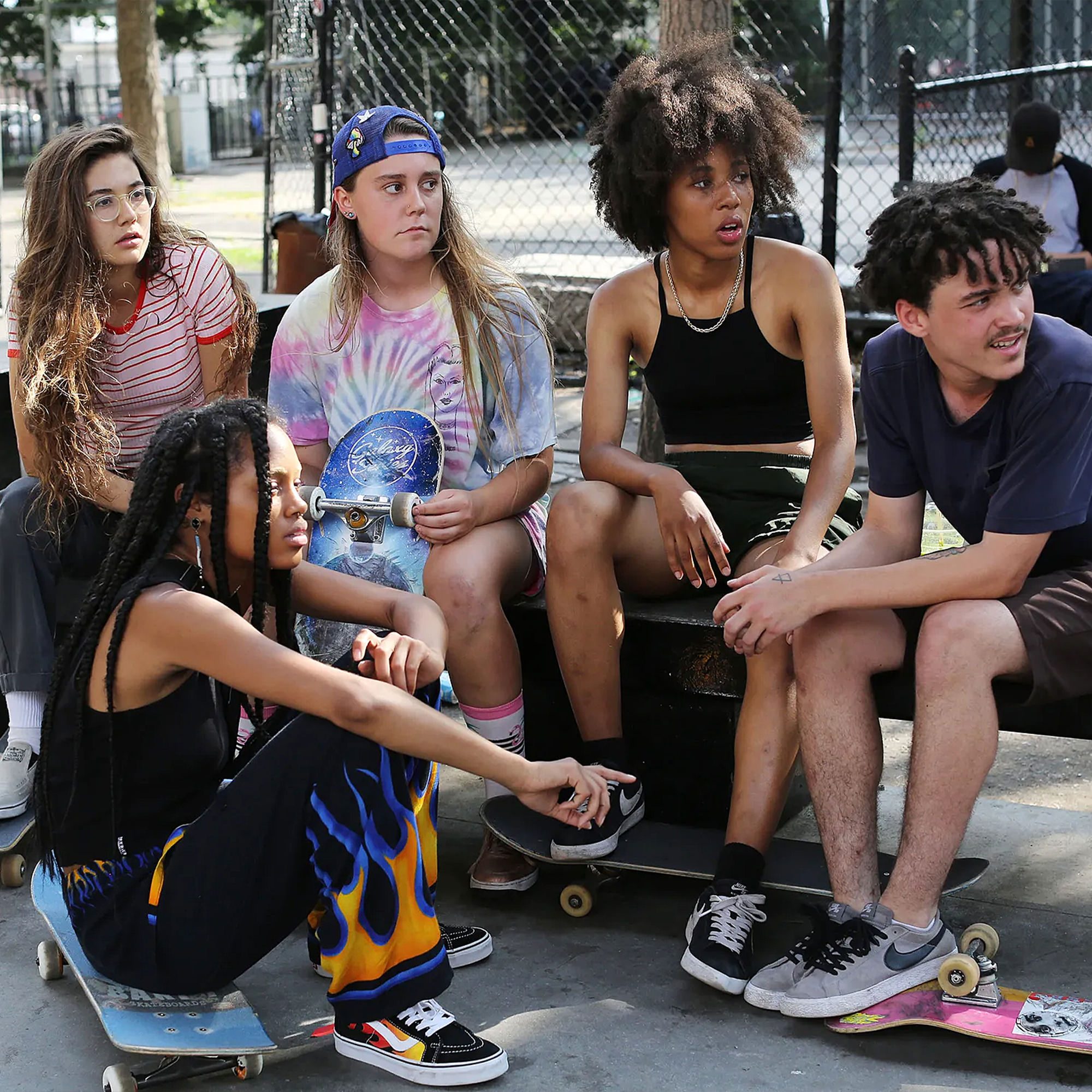