Practicing on an illustration of the prime minister's face, Thai skateboarders are showing support for a growing pro-democracy movement with defiant new designs rolled out at protests in Bangkok on Wednesday.

Rize-Style Skateboard owner Treewit "Chain" Boonkaweesilpn and a group of his friends from a small town outside the capital descended on the latest mass demonstration against Thailand's military-backed government carrying skateboards covered with graphics of hands smashing through a pile of tanks.

A flashy typescript calls for an end to "dictatorship" while popular hashtag #SaveThaiDemocracy sits on the nose of the deck, highlighting the important role social media, especially Twitter, has played in protests that have rattled the government since July. They also feature the three-finger salute from "The Hunger Games" movies, a symbol of resistance in Thailand since prime minister Prayut Chan-O-cha led a coup in 2014 and held onto power in flawed elections last year.

"Skating is our art, it's how we express our views on things like politics and how we practice our freedom of expression," Chain told VICE News ahead of the event at the city's democracy monument, which marks the anniversary of a 1973 student-led uprising that ushered in a brief period of openness in a country riven by a cycle of coups, street protests and multiple constitutions.

At the rally, they plan to offer free skate lessons, giving protesters the chance to learn how to pop ollies, carve and grind on a huge image of Prayut's face.

It's a bold stunt, especially after a smaller protest on Tuesday night led to a scuffle with police and twenty-one arrests as a royal motorcade carrying the country's powerful king passed nearby. The incident raised tensions ahead of Wednesday's bigger event, where crowds grew into late afternoon. But Chain and his team were undaunted.

"Skateboarding is a performance art. If something like gymnastics expresses beauty, then skateboarding is all about bravery. And bravery is important to political expression - it's what we need to fight against the fear that has been created in our minds by the elites," he said.

The new protest movement began with a group called Free Youth, whose demands called for the dissolution of parliament, the drafting of a new constitution and an end to the state harassment of Thai citizens. But the scope soon spread to include a range of societal issues, including LGBT rights, education and the once-taboo topic of the monarchy, which is legally shielded from criticism by royal defamation laws.

In a kingdom once known for its traditions, old certainties are under the microscope as Thai youth want to reshape their country according to a new set of values. Since the 2014 coup and national elections last year, in which senators handpicked by the former junta got to vote for prime minister, youth subcultures have been at the forefront of resistance.

Graffiti artists have satirized the suspicious wealth of generals. Rappers, punks and experimental techno DJs have used their music to blast dictatorship. And the must-have fashion item for the new generation of Thais is the political parody shirt, which itself has roots in skate clothing brands like X-Large, Freshjive and Fuct.

For Chain, the connection between the five-year period of outright military rule from 2014 to 2019 and the current youth rebellion is clear.

"I think it's the pressure kids got in school after the latest coup. They were forced to follow and recite the same old values made by the elites and it just didn't work," he says, referring to the "Twelve Core Values", which were pressed on the Thai education system by the military junta with the aim of instilling discipline, patriotism and love of monarchy in young Thais.

"Thai students have always been under a lot of pressure to begin with, so when the junta came and forced all this stuff on them, things got even worse," he added. "And now we have the internet, which can give us a glimpse of what things are like globally, and we see that it’s totally different from Thai schools." 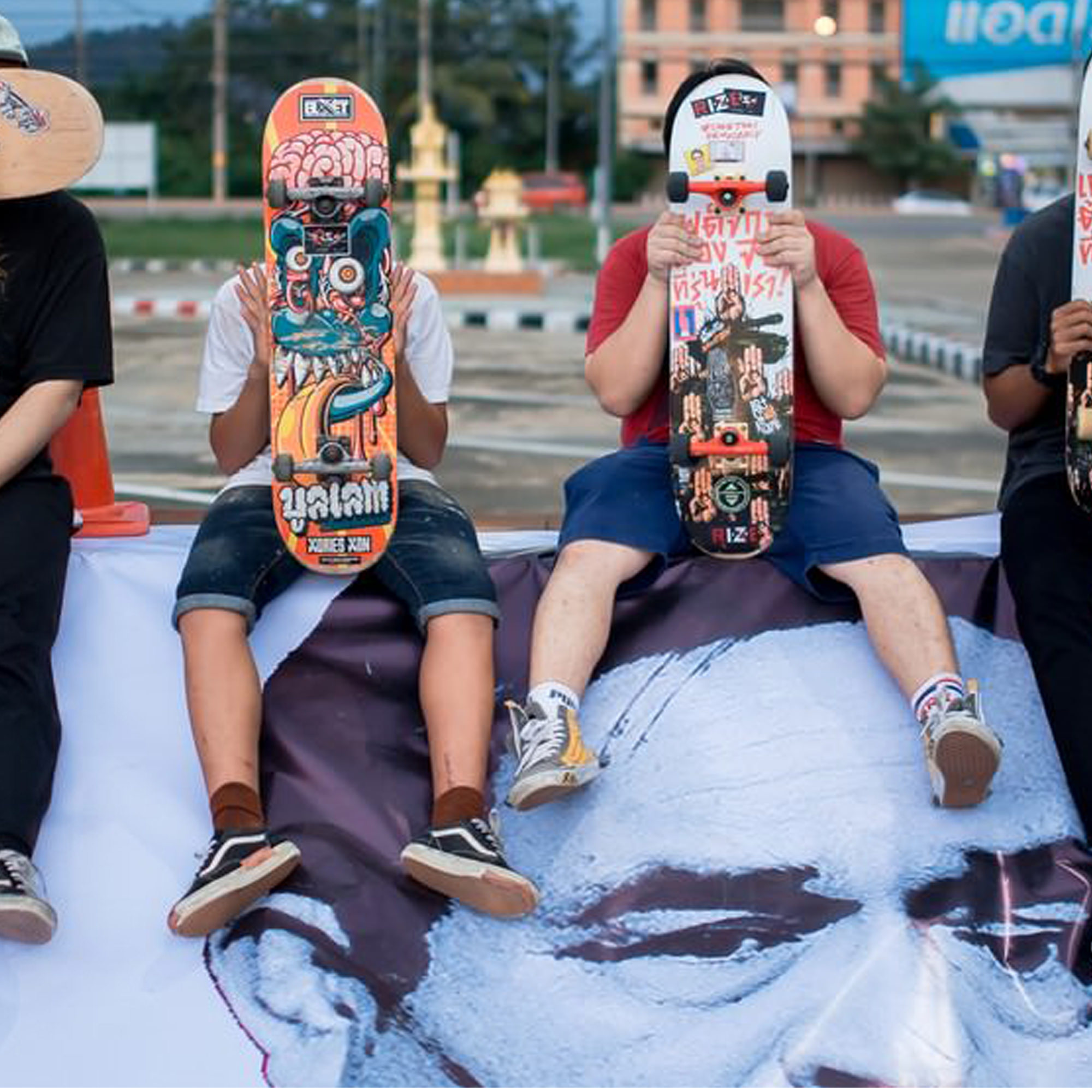