Drive past Alfred Cox Skate Park in Gisborne on any Sunday, and you can expect to see a bunch of young girls dropping in and landing kickflips.

That’s a big change from four years ago, when you'd be lucky to see one or two girls on a board. But the growth of the sport is all thanks to the work of Surely Skate, a group of local young women encouraging and mentoring more girls to pick up a skateboard and give it a go.

“When we first started, it was so intimidating. There were no girls,” says Hills, who's also a fulltime hairdresser. “[For] the first year or so, I wouldn’t go down to the skate park alone because it was just so scary.”

So Hills rounded up a few friends, including her sister Tessa, and the group would approach any girls at the skate park and let them know that if they didn’t want to be alone, they could skate with them.

Now every Sunday from 3pm, Hills and her friends head down to the skate park, with Hills’ Suzuki Swift packed with boards, helmets and safety gear for anyone who needs it.

The name Surely Skate came from the group convincing each other to hang out, saying “Surely come for a skate?”. The surge in interest has no doubt been helped by skateboarding becoming an Olympic sport.

Surely Skate are not only inspiring the next generation, but also those who've paved the way.

Georgina Matthews has been skating for over two decades - reaching the top of the sport - and has seen the evolution of skateboarding through New Zealand and competitions across the world, like the Olympics.

With the two boys next door setting up courses and encouraging her to try new tricks, Matthews - who's a professional singer - quickly progressed as a skateboarder through the 2000s.  But she skated for almost two years before encountering another girl.

Growing up in Tauranga, Matthews would skate against boys, consistently being one of the best in her age group.

“There were no categories for girls so it’d just be me and 15 other boys," she recalls. "But in saying that, I’d always be in the top five and most of the time in the top three."

Her first time competing with other girls was at the nationals, which she won. After fundraising, she took her skills to Australia, finishing second in her first international outing and landing an international sponsor.

She competed with the best in the world, even cracking the top 10 in the World Cup skateboarding rankings back in 2005.

All the accolades weren’t without backlash though. A handful of guys told Matthews she was only receiving sponsorship because she was a female.

Matthews still remembers an email sent to her from someone she didn’t know, full of criticism: “You don’t deserve any of this, you shouldn’t be sponsored, you suck at skating”. She responded explaining how hard she works and how much effort she puts in. The email's author apologised, Matthews says, but the words have stuck with her.

While both Matthews and Hills agree most men are really supportive, Hills saw the need for a safe space, free from judgement.

"I feel like with girls, or I guess anyone starting something new, they always feel like they’re going to be watched and judged," Hills says.

“I’m a girly girl so I’m wearing skirts, I’m wearing pink, I’m wearing jewellery when I’m skating and people could be thinking ‘She’s such a poser, she’s not even skating, she isn’t even good’. But at least I’m trying.”

All are welcome at Surely Skate, including non-binary and queer skaters.

The day before New Zealand moved into the red setting of the traffic light system in January, Surely Skate held their annual skate competition, Surely Shred.

Forty-five skaters entered the competition, 20 of them female. More girls contested the under 13 category than boys.

“There were originally more girls just in general than guys but then we had a few last minute guy entries,” explains Hills. “But we had way more girls competing this year than we did last year, as well and they were all such good skaters, so inspirational.”

The youngest competitor was a four-year-old girl, with Matthews the oldest at 34, still inspiring skaters of all genders and ages.

Hills says the idea to hold their own competition in Gisborne initially started as "a bit of a joke" - the Surely Skate team all having jobs, unable to take time off for competitions in Auckland, Wellington or Christchurch.

But the idea grew and continues to build, and people are already asking when the next edition will be - including Matthews, who won the 18+ category.

Hills and Matthews were talking at the conclusion of the competition when a man approached them and tapped Matthews on the shoulder.

“He was like ‘I remember you when I was a little kid and it was so good to see you skate and it’s so rad you’re still skating’,” recalls Matthews.

Another person to approach her at the competition was a mum of a young girl who echoed the sentiment and said her daughter was so inspired by Matthews.

“Partly the reason I do it is to inspire little girls or any gender out there, up and coming, to just keep pushing.”

She jokes the other reason being her physical inability to stop, even with injury, her latest a huge bruise on her thigh.

“Today, I go to a skate park, any skate park in Auckland, and there are more girls than boys skating,” says Matthews, who enthusiastically described it as ‘rad’, in typical skater fashion.

The impact of programmes like Surely Skate and others around the country - like Girls Skate NZ and Waa Hine Skate - is growing more visible by the day.

Hills has seen first-hand how the presence of girls and women at skate parks can encourage more girls to pick up a skateboard.

At their first session, Hills saw a girl at the park and wondered if she was there to skate.

“We approached her and said ‘Are you here for the workshop?’ and she said ‘Oh no but I can be’. She started skating that day and hasn’t stopped since,” says Hills. She's now good friends with the young skater, Myah Houthuijzen.

Hills’ 10-year-old neighbour Charlotte also wanted to start skating, so came along one day and is now entering competitions. She landed her first kickflip the other day.

Charlotte’s mum used to be hesitant to bring her down to the skate park without Hills, but now she's part of the skating community and knows it’s a safe space.

“I’ve told her she can trust the guys down there because they’re all really nice…and the skater girls will look after her,” says Hills.

Skateboarding was contested at the 2020 Tokyo Olympics for the first time, and has been provisionally approved as a sport at the 2024 Paris Games as well.

Matthews says it's cool to see the skateboarding community represented on a huge global scale. Vanessa Torres, an American who Matthews used to skate against, was a judge for the women's competition at Tokyo.

"You don’t see any other kind of sport where Australia’s cheering on America and it really doesn’t matter who wins, they’re all really good best mates," Matthews says. "It's definitely an amazing community to be a part of.”

The goal for Surely Skate is to become a proper organisation offering formal lessons. Hills admits it’s been hard to run the competitions as a non-profit, relying on sponsors for spot prizes and donations.

Hills' profession as a hairdresser, often working late nights and weekends, can make organising competitions difficult - unable to answer the phone or emails when she’s with clients.

But the most important thing for her is finding time to skate for herself.

Matthews is the same, working as a singer and most weekends performing in her band, Daughters of Ally, with her sister Jessie. But she's always finding time to skate.

“Skating helps me if I’m having a bad day," she says. "It's my love, my passion and I can’t stop until I can't walk, really.” 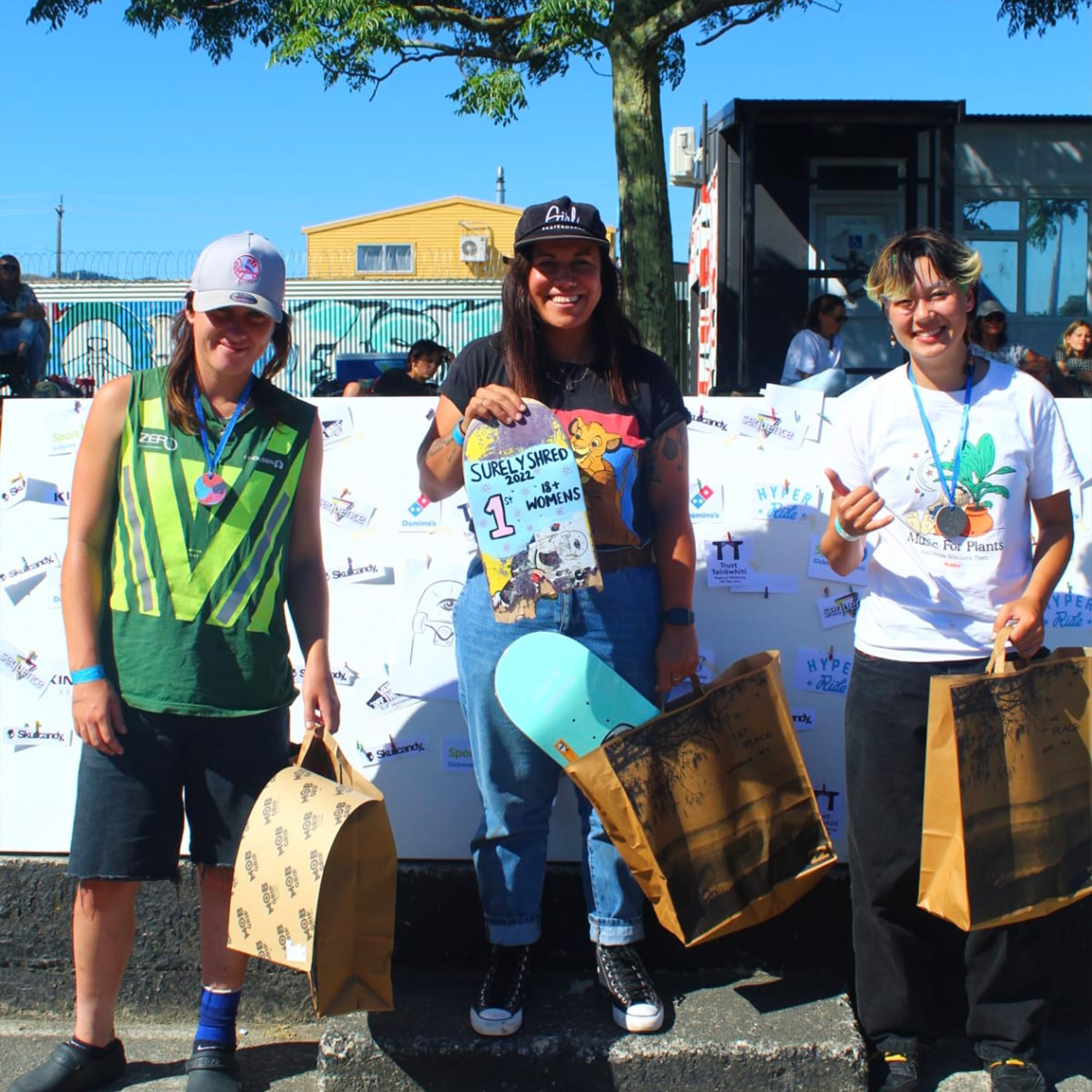