Teen skateboarding sensation Sky Brown: ‘Boys or girls, it doesn’t matter — I want to inspire everyone’

Teen skateboarding sensation Sky Brown: ‘Boys or girls, it doesn’t matter — I want to inspire everyone’

If a 13-year-old was going to argue with their parents, you’d expect it to revolve around homework or how late they’re allowed to stay up at the end-of-term sleepover.

Not for Sky Brown. Since becoming Team GB’s youngest ever Olympic medalist in Tokyo this summer, the British-Japanese skateboarder has spent the last few months having a rather more unusual debate over the dinner table at her home in Huntington Beach, California: whether she’s allowed to compete in surfing as well as skating at the next Olympics.

“They said no a few times - they thought it was too much pressure and they want me to have a good childhood - but I feel like I skate on my surfboard and surf on my skateboard anyway...” Brown tells me in her upbeat American accent after a morning out on the waves (her family split their time between Japan and California).

Despite practising the sport almost daily with her brother, Ocean, since the age of four and being an ambassador for Billabong, it’s Brown’s second sport - skateboarding - which she’s become most famous for. Her parents prevented her from entering the surfing qualifiers for Tokyo for fear of her burning out.

But Brown tells me it’s persistence that finally won her parents over since then. She actually surfs more than she skates these days (her daily routine in California is “surfing, school, skating, and more surfing”) and is insistent she can manage both alongside her schoolwork. “I can’t choose between them,” she says. “I feel like I can push boundaries in both.”

Hopefully Brown’s latest accolade - presented at a a glitzy (socially-distanced) ceremony in Salford last night - will help to persuade her parents that they made the right decision. Just days after we speak, Brown is crowned the winner of the BBC’s prestigious Young Sports Personality of the Year accolade, an award she was able to collect herself as she and her family are currently in the UK visiting family and friends for Christmas.

“I can’t believe it,” she told the crowd at Sunday night’s ceremony in a glittering black dress and trainers. “I honestly don’t feel like I deserve it because I’m next to two really amazing people [England footballer Jude Bellingham and Para-swimmer Ellie Challis], but I’m so thankful... I want to make Britain proud as much as I can and I hope I did.”

By the looks of fans’ reactions, it’s clear she did. The Gen-Z skateboarder quickly became the only story anyone wanted to read about back in August when she won a bronze medal at the age of 13, and since then her confident, bubbly personality has quickly propelled Brown to rockstar status.

Not only did she become Britain’s youngest-ever Olympian, but she nearly died from an accident 12 months earlier and has 1.4 million Instagram followers, a published book, her own Barbie doll and a Ł3.6m Nike sponsorship deal. Oh, and she’s a successful dancer - she’d won reality show Dancing With The Stars: Juniors by the age of 10.

Brown is the first 13-year-old GB Olympic medalist and her dream of competing in the surfing would - if she qualifies - make her the first athlete of her age to compete in both sports in an Olympic Games. But on the day we speak the teenager is actually here to talk about another first: her first NFT, a collectable piece of digital artwork, in the form of a Sky Brown avatar (a partnership with Yoplait, the creator of Frubes and Petis Filous yogurts).

The limited-edition NFT is available from the Team GB website and each purchase will contribute towards Brown’s chosen charity Skateistan, which aims to empower children through skateboarding and education.

For Brown, the power of her sport - and hence Skateistan’s work - can be life-changing. “Skateboarding teaches kids to be confident,” she tells me of her “fun, beautiful” profession. “When people skate they just think about fun and happiness and their landing, they don’t think about what they’re going through.”

Brown makes the act of soaring down concrete slopes on two wheels sound easy and almost dreamlike, but what about the dangers of accidents like the one she suffered last year in which she fractured her skull? At the time, Brown assured fans she would be “just fine” in a black-eyed picture from her hospital bed, but she admits she still gets scared sometimes - she just has to turn that into a super-power. “You have to be brave for skateboarding,” she says. “You’re going to fall sometimes and everybody does, so it teaches you to never give up.”

Brown speaks with a confidence beyond her years. She says her aim is to inspire and hopes the fact that she’s a girl in a traditionally male-associated sport will boost diversity. “Age doesn’t matter, skin colour doesn’t matter. Rich or poor doesn’t matter,” she says, referencing a clip of her teaching skateboarding to schoolchildren in Cambodia.

More than half of the children in the video are girls and for Brown this is important. She receives messages from both boys and girls but it’s those from girls that give her a “fire in [her] heart”. “I want to close the gender gap,” she says. “I feel like I have a responsibility.”

Her Instagram is a mosaic of sporting action shots, posing in baseball caps and cut-off jeans, and high-fives with her little brother Ocean, but any fans assuming she’s a tomboy should think again. “I’m actually a girly girl,” she tells me, referencing the other side to her Instagram: skating in a tutu, the pink fluffy cushions on her bed, and posing in a pretty summer dress on her 13th birthday. “I like to go shopping sometimes, paint my nails, dance, have sleepovers, bake...”.

Brown has reams standout qualities - a hard-working attitude, buckets of bravery, a confidence beyond her years - but clearly it’s this enthusiasm to do everything - not to be put into a box - that is her greatest superpower of all (and the reason the Young Sports Personality of the Year judges picked her as this year’s winner).

She won’t put her fans into boxes either. Yes, the messages from little girls give her a push, “but it makes me happy to think I’m pushing boys too,” says Brown. “It doesn’t matter [if it’s] boys or girls, I want to inspire everyone.” 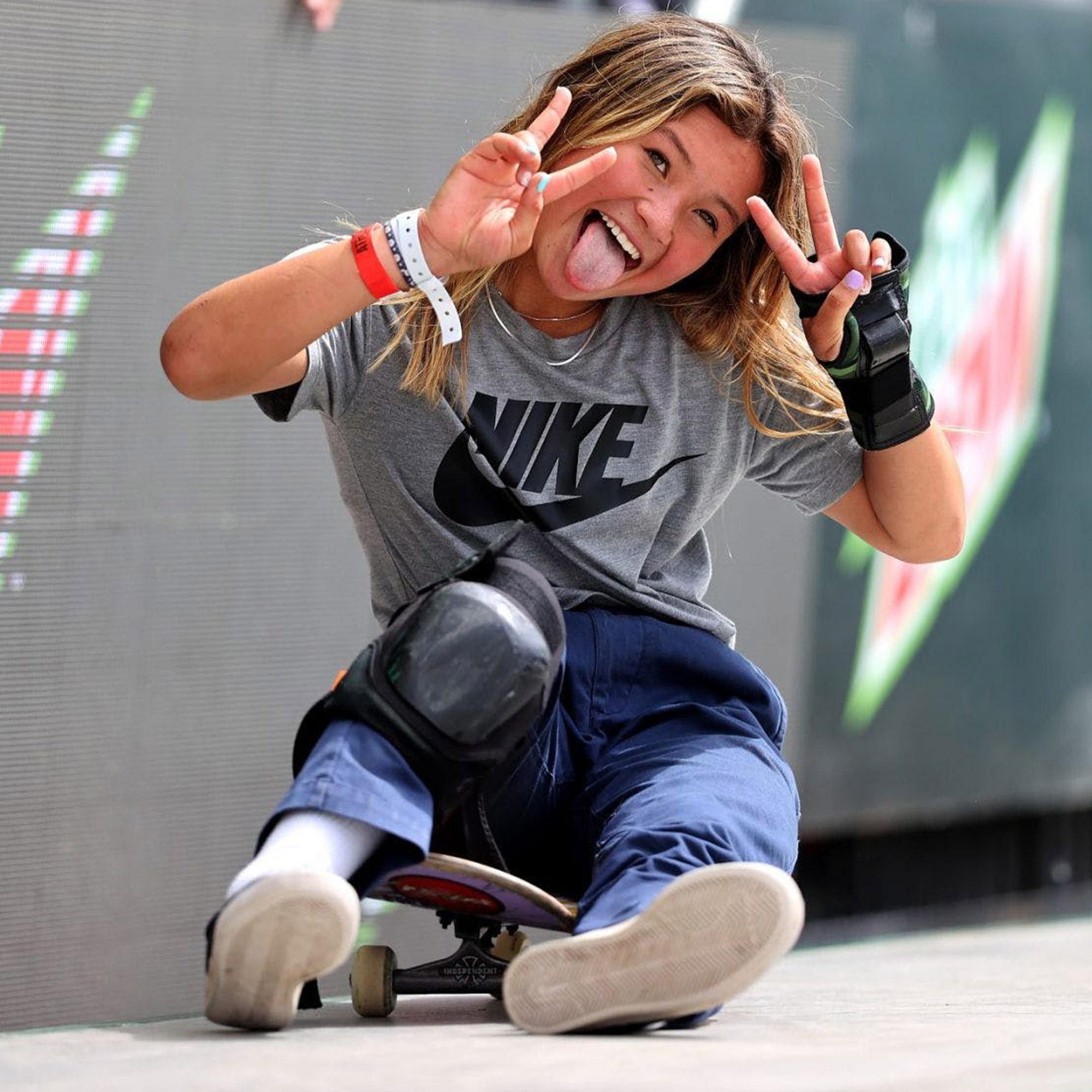