Sky Brown, the 11-year-old Olympic hopeful: 'I want to push boundaries for girls'

Sky Brown, the 11-year-old Olympic hopeful: 'I want to push boundaries for girls'

"Woah, did you see how high she went? That was four or five feet," says one of the kids at the Huntington Beach skatepark in California as Sky Brown launches into the air and performs a frontside grab.

She soars above the head of her younger brother, Ocean, who is watching from the rim, and bails out of the landing at the last minute, dropping more than 10 feet into a concrete bowl before grinding safely to a halt on her knee pads.

"I like to skate high; I like to do spins and kickflips," she says. "I like to do tricks that boys are doing because I feel like some boys think girls can't do what boys can do. I want to go to the same height as them and push the boundaries for girls."

At 11 years old, Brown has a precocious talent for a sport that will make its Olympic debut in Tokyo next summer. She is ranked third in the world for women in the "park" discipline and has an advantage of more than 70,000 points over those outside the top 20. With four major events remaining this season, she has all but officially qualified for the Olympics.

She is set to become Britain's youngest summer Olympian, beating the record of 13 years and 43 days held by the swimmer Margery Hinton since 1928, and giggles at the idea of winning an Olympic medal less than a month after her 12th birthday: "Like, that's crazy," she says in a thick American accent. Only, it's not crazy; it's entirely realistic.

When we first meet at 8am on a fresh winter's morning in California where she lives part-time, Brown, who was born in Japan to a Japanese mother and British father, seems to be half-asleep: she went to the movies late the previous night to watch Frozen 2 and, uncharacteristically, did not wake up in time for an early morning surf.

She began skating aged four and recalls borrowing her father's skateboard without his permission and riding it around the house: "At first I mostly learned from YouTube," she says. "I said to my dad 'please, please, please teach me' and he told me a little. But if I want to learn a trick I'll just search it online and study about it myself."

Such is her natural talent for boardsports, Brown had hoped to compete at the Olympics in skateboarding and surfing, but ultimately there was only one viable path. "I like them both the same, they're super similar," she says. "But it's like if you go and get ramen and ice cream – if you eat too much ramen you want to go and get ice cream. I used to be better at surfing but I've been skating a lot lately and I've got way better from doing contests. It's made me want to go harder."

Lucy Adams, the chair of Skateboard GB, says Brown has "a natural, flowing style" and "works at one with the skateboard". Brown beat Adams, who is now her mentor, in a competition at NASS festival in 2017. "Her ability is endless," Adams says. "And that's like the whole of skateboarding: it's infinite, no one can complete it. There'll always be new variations of tricks and that's exciting for her."

Brown is not immune from fear when tackling new tricks but she won't surrender to it. She broke her arm a week before the Dew Tour, the first Olympic qualifier, but skated at the competition in a cast.

Her father, Stewart, says: "Since Sky and Ocean were little, we play outside, we let our dogs lick their faces, we roll in the mud, we eat food with dirty fingers – that's life. In society now people sterilise everything but at the same time everyone seems to have allergies and is getting sick … I feel like kids are tough and as long as it's not stupid I trust her. Sky's a good judge of what she can and can't do."

Evidently so: she came 12th in the Dew Tour competition, before placing fifth in China, third in Săo Paolo, third in Rio and first at the UK skate nationals.

After waiting an hour for the skatepark to dry out, Brown traces a sinuous path around the bowl's contours, performing inverts and kickflip indies while men four times her age smack their boards on the coping in appreciation.

In breaks between skating she fools around with "Oshie" and asks the kinds of innocent questions you'd expect of an 11-year-old. "Is yellow your favourite colour?" and "What's your favourite fruit?" Hers, I learn, is turquoise and peaches.

A self-described "girly girl" who likes to do the Floss dance on the sidelines at competitions, she displays a maturity beyond her years when discussing her charity work in the favelas of Brazil or the rise of women's skateboarding, of which she is a vocal advocate. "When you skate you forget about what you're struggling through, you just think about happiness – that's why I think skating can help people," she says.

She says she loves visiting the UK because of the food – especially bangers and mash with gravy – but defers to her father when asked why she chose to represent Team GB over her native Japan.

"We chose GB because we felt that there was no pressure and they didn't ask us to commit," he says. "They made it very clear that if she wasn't happy or wasn't feeling good at any time we could pull out. That was huge for us."

Valid reasoning, for sure, but one wonders about the pressures wrought by her wider commitments: she is sponsored by Nike SB; she has appeared in a global advertising campaign alongside stars such as Serena Williams, Megan Rapinoe and Caster Semenya; she has nearly half a million followers on Instagram; and she won the American TV show Dancing With The Stars: Juniors this time last year. However, she looks entirely at ease with her action-packed lifestyle. Indeed, she is the one driving it.

"I don't think the Olympics or anything will define her – she has a whole life ahead of her," says her father, cautiously. "One thing [like skating] is not the middle of the world."

Which provokes the obvious question: what does she want to be when she grows up? "I want to be a skateboarder, surfer, dancer, and I play the guitar now. I have a lot I want to be," she says. "When I skate I just feel free, like I can do anything. And if people see me, the smallest girl, doing the highest trick, then anyone could think they could do anything." 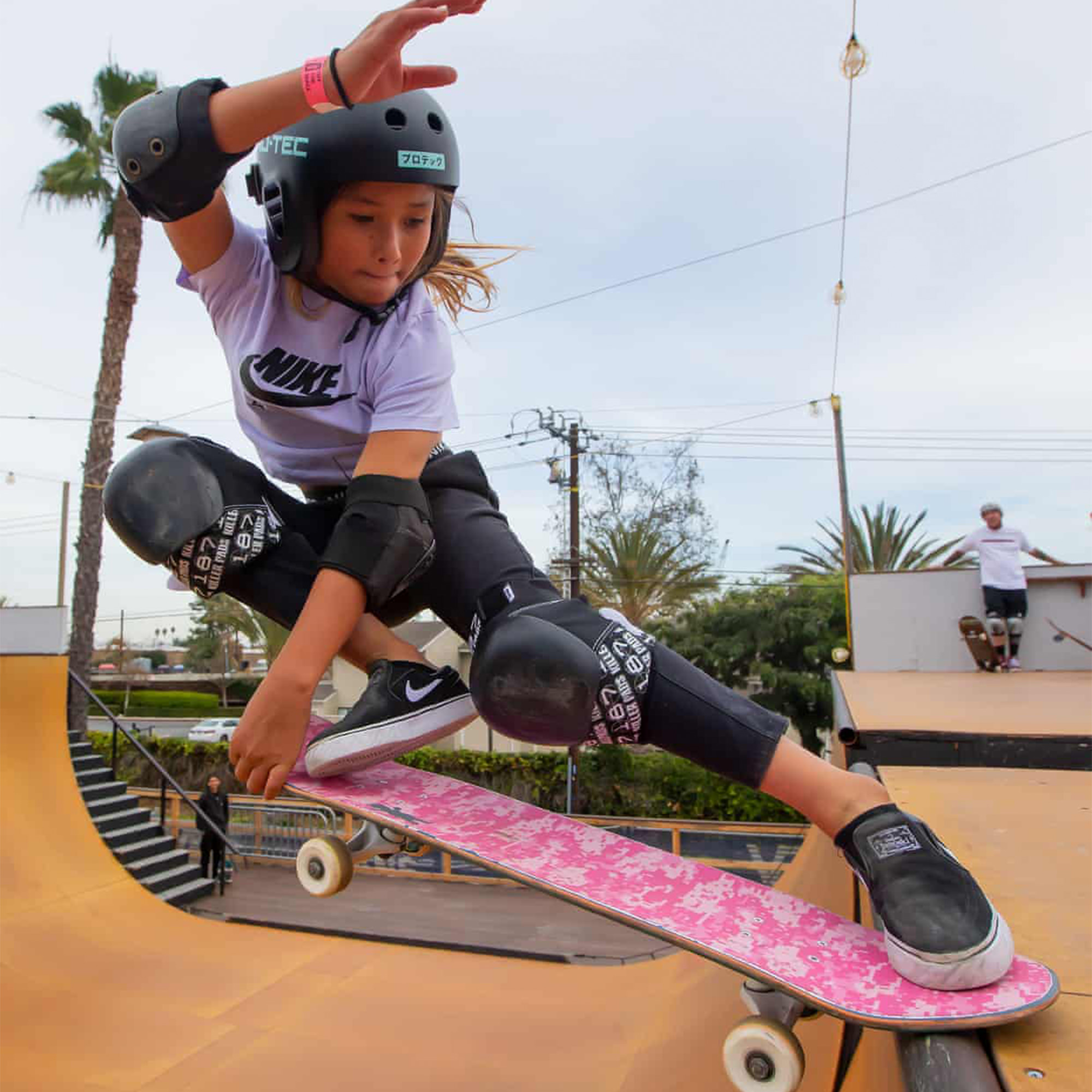