Like most skate crews, Skateboobs has an origin story. Well, kind of. It was a fateful meet up in London that unexpectedly brought the womxn together. Meg Wriggles, the crew’s organiser and artist, offhandedly decided to attend a girls skate night at the House of Vans where she bumped into 24-year-old Amy Allard-Dunbar. Emboldened by a few cocktails (seven, according to Amy), a slightly drunk Meg taught her new friend how to drop in off a halfpipe. “It was actually terrifying,” says Amy. “She was like, I've just met you, hold my hands and I'm gonna force you to drop in.” After learning Meg was moving to Scotland, it wasn’t long before they crossed paths at an Edinburgh skate night, which brought even more womxn into the fold. “It was the local pub, Mousetrap, that really brought us together,” says Meg. After some wrong names and several drinks, the seven femxle and non-binary skaters decided to form a crew.

Although they’re one of the newer collectives kicking around, the group quickly become masters of their own game and realised they needed a fitting name. “We combined two words which aren't normally put together: skateboards and boobs,” Meg explains. “It is really important to us that breasts are not perceived as an inherently gendered or sexualised organ -- and we want to normalise the idea that anyone of any gender can have boobs, and anyone can skateboard.”

But it’s on TikTok, where the crew created an account shortly after the beginning of their journey, that Skateboobs has really come into their own. After speedily building their way to 28,000 followers and 400,000 likes —sharing chaotic videos of risky trick set ups, lowkey scripted memes, and reels of overconfident wipe-outs — the group are now using their name and growing platform to help claim a greater space for womxn in the male dominated sport.

“It's amazing to see that we've been able to create our own space, physically and online, and I'm proud of it,” says Eli of the looming one year anniversary of the crew and their TikTok account. “We had a lack of representation growing up, so the biggest thing for us was to be those people we needed in skateboarding. We've started to achieve what we wanted and the progress we've seen in each other, individually and as a group, has been really powerful.”

A ragtag team of university students and activists, this budding skate team have built their ethos around creativity, something they all personally share. “Creativity isn’t just one way for us,” says 21-year-old Eli, who studies animal conservation biology. “For some of us it’s film or visual editing and others it’s more music and art. Collectively, creativity is a common theme for us.” For 19-year-old Meg, skating has become a combined space of art and solidarity. “There are really no rules, you can invent your own tricks, and it's always been a subculture directly linked to creative fields,” she says. “You have so many ways to express yourself and that has been really liberating for me.” Eli agrees that the community, creativity, and camaraderie of skateboarding are a huge comfort. “Skating is different from other sports that have cliques, and a social pressure to do certain things and act a certain way,” they explain. “I've found a lot of comfort in skateboarding through self-expression. The community has been the biggest thing for me the past year — it's been more positive than a lot of other things in my life. I haven’t been skating long, and yet in such a short space of time it’s benefited my mental health in such a huge way.”

It’s skating, and also their new home city of Edinburgh, that have helped create unity in the seven-strong crew, who all hail from very different backgrounds. “I'm from a small fishing town in Aberdeenshire, and although I got my first skateboard when I was 10, there wasn't really anyone to skate with,” explains Nancy. “Especially not girls.” After dropping out of the filmmaking course she moved to Edinburgh to attend, the 19-year-old found community and meaning through her skating. Finding a space for queer femxle and non-binary skaters was important to Eli too. “I grew up outside Glasgow surrounded by fields and there wasn't any skate community there. It was never really welcoming either,” they say. “So, I bought a skateboard off my friend in first year of uni and found Skateboobs. I’d say it’s not where you live, but where the skate scene is, that’s the important part.”

“There's a freedom here in being yourself,” agrees Amy. “I think there's a lot of conflict around how gender is understood or expressed. Skateboarding is obviously a very male dominated sport, but draws in a lot of queer women because we have that ability to go challenge norms and stereotypes.”

Community is at the centre of the Skateboobs ethos, and it’s also what inspires the crew to use their new family to help others. “Being queer in skateboarding hasn't been difficult for me, but being a womxn with my gender identity has,” says Meg. “If I hadn't met these guys, if we hadn’t formed Skateboobs and formed this community, I probably would’ve given up if. The point of Skateboobs is to say that you can be a womxn and can reach any level you want. You can be a queer womxn, you will be welcomed and will find your people. If you don't find your people, we will be your people. It's been hard to be a womxn in the sport and it's hard enough to be queer anyway.”

“Everything we do is changing people's perception of what a skateboarder looks like. Sometimes we’re skating and parents come up to us and tell us we're setting a good example for kids,” Amy explains. “We’re just being visible and showing that you can be queer, you can be femxle, or non-binary, or a marginalised individual and be super into skateboarding. You can be equally into skateboarding as a cis white man. Your identity doesn't determine how interested or how valuable your contribution is to that sport. Most of us, as queer femxles and non-binary people, feel just the same about skateboarding as a straight man, and we’re here to change and challenge the ongoing narrative.”

However, its not just changing perceptions and challenging the dominant narrative around skateboarding that Skateboobs are dedicating themselves to. This year they teamed up with breast cancer charity campaign CoppaFeel to raise awareness and money for people living with breast cancer. “We wanted to take a meaningful direction and do something for others,” Eli explains. To that end the crew have created a kickstarter and a TikTok-based campaign which educates young people on how to check their bodies for signs of cancer, and the taboos around doing so. “By chance, I went to a talk at my university by the woman that founded CoppaFeel and I was really moved by it,” Eli explained. “We made the connection quite naturally and felt we should do something big for our one-year anniversary. In terms of actually picking the charity, it just made sense. It’s a really nice thing to do and shows we can do more than skate edits, and we get to raise money for the charity too.”

Further to their awareness drive, Skateboobs have also designed custom CoppaFeel merch, with all the profits going to the charity. “We want more people to pay attention to signs and their bodies,” Meg explains. “It also ties in with the idea that not every womxn has boobs and not everyone that gets breast cancer is a womxn. It can happen to anyone.”

Inspired by their work with CoppaFeel, Skateboobs are kicking off the year by further combining their skating and charity work. Their next project will be with mental health charity The Joshua Nolan Foundation, chosen because mental health is an issue close to home for all of the crew. “We are keen to work towards opening up and normalising the conversation about mental illness within the skateboarding community,” explains Meg.

So, whether it's hand delivering T-shirts in a pandemic, shitposting Greggs bakery with love messages on TikTok, or encouraging fellow womxn to get involved with skating, Skateboobs are starting 2021 as they mean to go on. But outside of all their long-term projects, what the crew really want is simply to have fun, and to have a continued impact on the Scottish skate community. “We skate within Edinburgh, where we're seeing that a lot more homophobic and transphobic jokes and racism is getting shut down by cis men. People are verbalising our ethos,” Meg says. “It’s only a start, but I can see a clear difference we’ve made in the way that people talk to each other and approach these issues.” 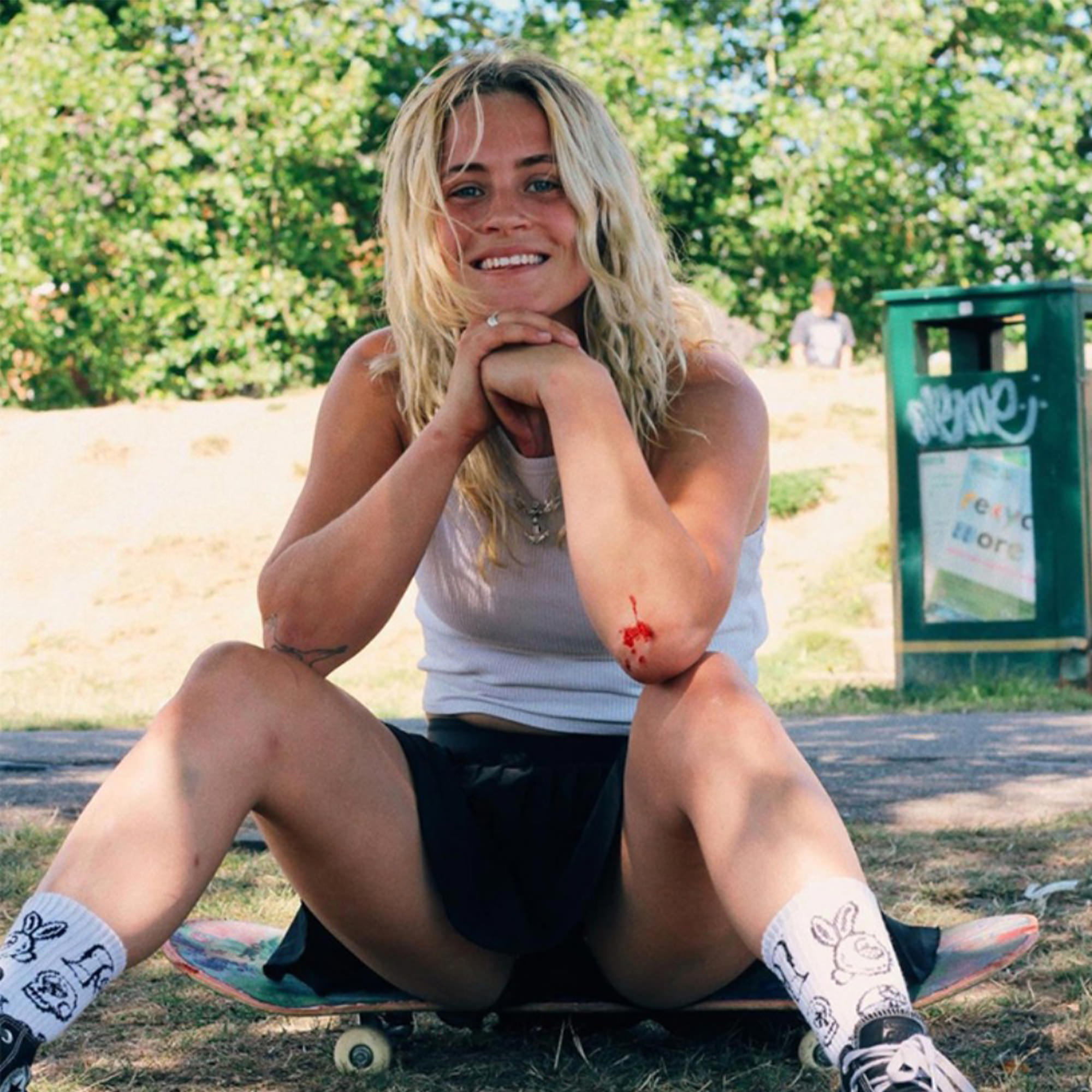