Where to Skateboard in the D.C. Area

Where to Skateboard in the D.C. Area

Jimmy Pelletier has been affectionately dubbed the mayor of D.C. skateboarding by young skaters in the area. He’s the founder of the DC Wheels, a skateboard team and charity organization that skates 45 miles annually to raise money for different causes, such as ovarian cancer — and which is composed of kids, adults and even a 70-year-old.

That’s representative of the diverse Washington skateboarding scene, he says, which expanded during the coronavirus pandemic, as people tested new hobbies. “D.C. has one of the most explosive skate scenes in the world,” says Pelletier, who began skating as a child in the ’70s. There are many reasons to love the sport, he says, “and it’s not just the athleticism — it’s the culture, it’s the art, it’s the music intertwined with it. It’s the friendships, the bond, the fashion and lifestyle.”

As skateboarding makes its Olympic debut in Tokyo, local enthusiasts expect to see more Washingtonians at the area’s skate parks.

Brian Aguilar, who owns Crushed Skate Shop on U Street NW, says that since opening the District’s only skateboarding shop last year, it’s been hard to keep the shelves stocked. Interest is “definitely thriving,” he says, and it’s easy to dive into the local skateboarding scene. He encourages those new to the sport to stop by the shop — he and his team can help with board setup, plus dispense pointers on where to skate or find good lessons.

If you want to observe the best of the best before getting started, head to Freedom Plaza on Pennsylvania Avenue. It’s a spectator’s dream, says Rian Singleton, a manager at the Bethesda Boards skate shop. (It’s also illegal to skate there — the police have been known to hand out tickets — but that doesn’t deter the most die-hard skaters.) Freedom Plaza “is like the Mecca of skateboarding in D.C.,” Singleton says; it’s nearly impossible to go there and not see some snazzy board work.

Beyond the plaza, there are lots of outdoor parks for skateboarders, including a new one on the way: The renovated Shaw Skatepark, which the city consulted local skaters about, is scheduled to open in late summer. It will be accessible for all skill levels, with attractions such as new lighting and seating areas and a flipped ledge feature.

Here’s what to know about some of the area’s most popular skateboard parks.

The Skate Park at RFK Campus

This park, designed by pro skater Geoff Rowley, is a popular spot for families just finding their footing as well as those who are more advanced. “It’s a very street-oriented skate park,” Singleton says. “I think it definitely helps get skateboarders off the streets of D.C., because all the obstacles mimic obstacles you would find out in the streets and in the real world.”

Bonus: There are copies of the downtown Freedom Plaza ledge and Golden Rail, which are architecture fixtures that skaters like to slide on and use for tricks. (The Golden Rail is located at the Metro Center station and is a favorite among the local skateboarding community.) It also has lots of good transitions, Aguilar says. Good what? “A transition is kind of like that surfer style of terrain — we can go up and carve the edge and come back in,” he says.

Skateboarders have preferred styles, Singleton says: Those who are into street skateboarding are all about rails, ledges and regular tricks on flat ground. Transition skaters seek ramps, halfpipes and quarter pipes — anything that’s sloped will do. And vertical skateboarding is “when it’s a halfpipe with a straight-down section, like a vertical section at the top,” Singleton said. “And that’s its own discipline because of how difficult it is.”

The Green Skate Lab in Northeast is like a big multilevel bowl, ideal for advanced transition and vertical skaters. It’s not the best place for beginners to practice, Singleton says, but those craving a challenge tend to love it.

This recently renovated concrete park in Arlington is “amazing,” Pelletier says. The 16,300-square-foot space blends retro and modern features, including two bowls, a snake zone and an area for street skating. It has pool coping and steel coping, which are types of material at the top of a transition that skaters look for. There’s also a marble ledge, quarter pipes, a skateable doorway and an intermediate A-frame, among other features.

The park’s concrete is “very smooth,” Singleton says. “And all the obstacles are well-designed. It’s a very large park, too, so [there are] a lot of different varieties of obstacles you can hit.”

Helmets are required, and there aren’t any for rent at the park.

This summer brought another addition to the local skating scene: a renovated mixed-use park in Rockville for skateboarders and BMX riders. The 15,000-square-foot space features concrete ramps, bowls and rails, with standout elements such as a kidney bowl, quarter pipes, rainbow grind rail and a slappy curb. (A rainbow grind rail refers to a handrail or other rail designed for stunts such as grinding, which involves sliding along a surface. A slappy curb is a super-low curb that’s also ideal for grinding.)

The park was designed by Spohn Ranch — a Los Angeles-based company that specializes in road trip-worthy skate parks — and engineered “with skateboarders in mind,” Singleton said. It’s appropriate for all types of skaters, he adds, with “different sections of the park for different skill levels.”

Beginners and pros will appreciate this large concrete park that’s designed to look like a plaza. “It has all kinds of great stuff,” says Singleton, who considers it one of the best in Virginia. “It’s designed really well.” (Spohn Ranch, the company behind the Rockville park, also worked on this one.)

The park’s obstacles include a shark fin, manual pad and euro gap with ledges and rails, and it’s anchored by a clover-shaped bowl. There are jump ramps ideal for kids and other novice riders, as well as mini-ramp halfpipes that are more challenging.

Kids younger than 10 must be accompanied by an adult, and all skaters are encouraged to wear helmets. 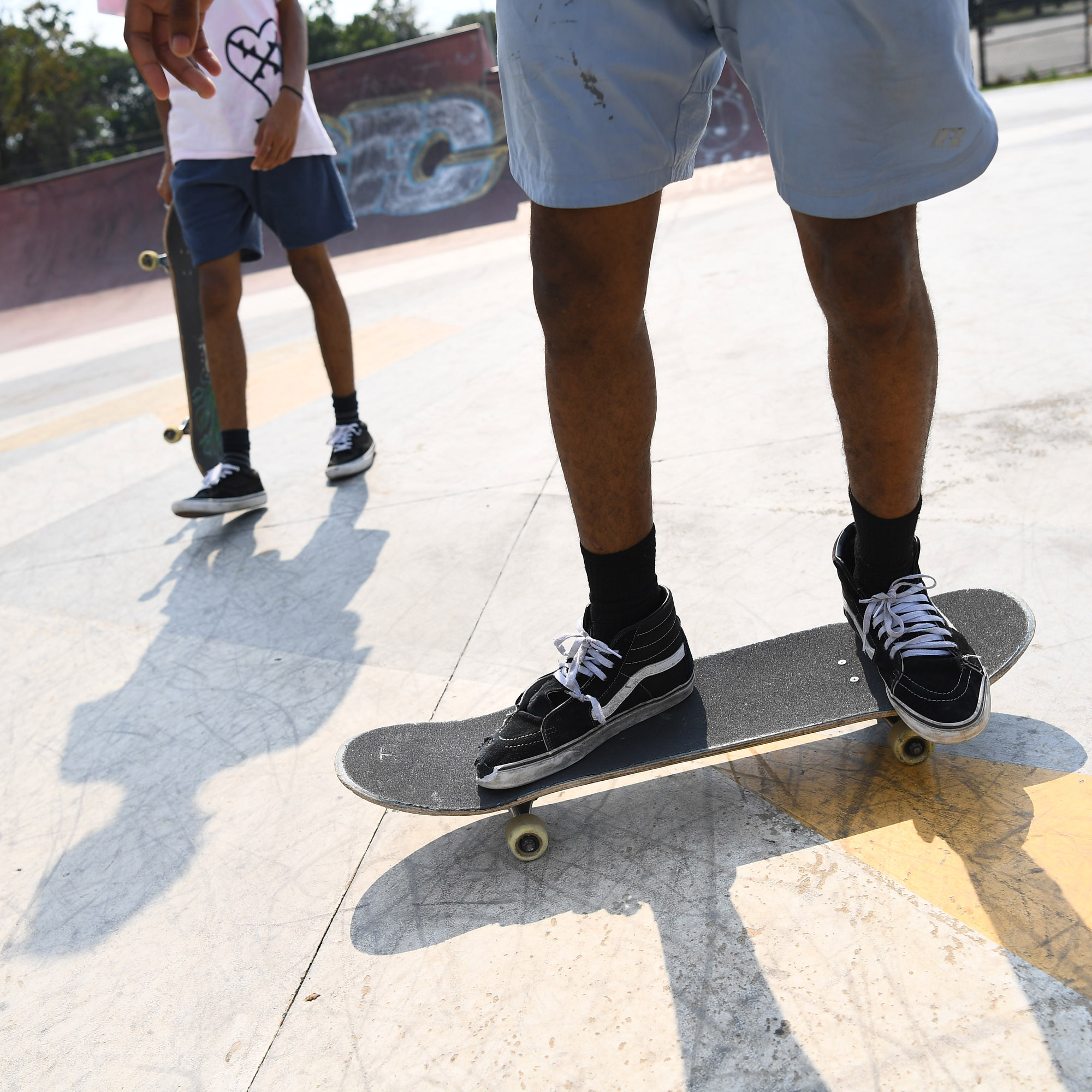