Skateboarding On The DMZ

Skateboarding On The DMZ

Do People in North Korea Skateboard?

North Korea (Democratic PeopleÆs Republic of North Korea) is arguably one of the most interesting, yet mysterious countries in the world, a very different nation from its technological neighbour, South Korea. Skateboarding has recently become quite popular in South Korea, the question lies as to when it will gain a following in North Korea.

North KoreaÆs militant leadership and infamous strict legislation makes it the last place on earth you would expect to see skateboarding. North Korea has consistently tried to distance itself from the western world and has publicly expressed hatred for the USA and the American way of life.

Skateboarding, being an American invention, is not a sport the world would expect Supreme Leader Kim Jong-Un to promote. However, in 2012, Pyongyang, the North Korean capital unveiled its first skatepark, open to the public.

Following the separation of Korea in 1945, North and South Korea were established as separate countries. The tension between the two countries echoes on the DMZ to this day, over the last fifty years the two nations have taken drastically different approaches to governance.

North Korea has been lead by three supreme leaders of the Kim dynasty, of which all embody the strict law of the workerÆs party of Korea. Where facts start and rumours end of the reality behind North Korean life ¢ we can be certain that western freedom is not something that is available on the daily menus of everyday North Korean people. Prison camps, military parades, famine and impressive propaganda has allowed the Kim dynasty to thrive in control of North Korea. Citizens of the dictatorship have no real knowledge of life outside of North Korea.

South Korea has become the technological capital of the world in recent times, with major tech companies, such as Samsung kickstarting a powerful foundation for the countries development. Not only is South Korea famous for its technology, but also, for the arts, with K-pop (Korean Pop) becoming an international phenomenon.

Skateboarding is a sport like no other ¢ born in a time of experiment, freedom, fashion, peace and fun ¢ skateboarding embodies its own ideology. Skate culture has adopted a laissez-faire attitude and reckless anti-social behaviour, unlike any other physical activity.

Throughout the west, Skateboarding has been melded into an art form like no other ¢ recently gaining more respect on the international stage after being introduced into the Olympics. Where other sports may require natural talent and grassroots pathways, skateboarding is open to anybody, you can skate anywhere and everywhere, park or street; allowing young people to experiment and be creative with their environment.

ItÆs interesting to imagine a version of North Korea where skaters roamed the Kim Il Sung Square, as one might see at Venice beach, Barcelona, or London ¢ for how can such an independent, unregulated sport fit into a strict, militant, uninformed society such as North Korea? To conquer borders of normality is what makes skateboarding exciting and infectious, but is North Korea yet infected, are people even aware of skateboarding, or even allowed to skate freely?

South Korea has set an international precedent for economic success, technology and development. However, South Korea does not exist without its faults ¢ the country has very high expectations and some might say an unhealthy work ethic, leading to many citizens feeling insignificant if they donÆt achieve the highest standards. South Korea has a high rate of suicide, stemming from a culture of high career expectations ¢ suicide is currently the countries fourth highest cause of death. High success is a backdrop of stress, pressure and misfortune for many, leading to a confused population.

The skate scene in South Korea is small but ever-growing. Skateboarding in the 1990s was almost unheard of in South Korea, but in recent times more than seventy-five skate parks have been built. Whether there is a correlation between an increase in recreational activities such as skateboarding and a population of unhappy, insignificant citizens is to be speculated on.

Particularly the fashionable side of skate culture has taken South Korea by storm. Following the growth of K-pop, skate brands like Supreme and Thrasher have become popular in South Korea, where K-pop bands have modelled skateboards in photoshoots and music videos influencing the younger population.

Aforementioned, the fashionable side of skateboarding is essential to the skate culture and lifestyle ¢ an image of anti-social independent expression. True professional skaters in the South Korean scene probably do not wear Thrasher as they are aware of the popularised fashion; but that does not stop the influx of new skaters, enticed by trends that mark the South Korean fashion industry.

Alike all countries that have adopted skateboarding, South Korea is manifesting its own skate culture ¢ no doubt cherry-picking the quintessential parts of the sport from its American roots, whilst introducing its own fashion trends, tricks, settings and attitude.

Whilst South Korea seems a desirable country in which to live on the surface, many citizens feel the heat of expectation and hard work in the country is too much to handle; perhaps skateboarding is the source of freedom, career opportunities and expression that is being absorbed into Korean society. So can the same be said to North Korea?

In 2012, on the east side of the Taedong River in Pyongyang, Kim Jung Un sanctioned the opening of a skate park for the public. But, why would a supreme leader of a country like North Korea, one that despises western civilisation, allow for an American and quintessentially defiant sport culture to be kickstarted in the capital city?

Sport is an essential component of North Korean life, especially in the eyes of the supreme leader. Kim Il-sung the first and founding supreme leader of North Korea believed physical education not only formed one of the three pillars constituting the working-class, communist nation; but it also prepared children for a life ahead that required hard work, courage and perseverance.

The Olympic games have become very important for North Korea, as an opportunity to show off their athletic, physical acumen on the world stage. Kim has claimed that ōonly sportspeople can cause the flag of our republic to be hoisted in the sky of other countries in peacetime; it is their sacred duty to exalt the prestige and honour of their country by winning gold medals.ö (Kim Jung Un).

In an attempt to build and develop an internationally competitive sporting attitude in North Korea, Kim Jung Un has built the Masikryong Ski Resort and the Mirim Riding Club. The question lies as to whether many North Korean citizens can access these sports facilities or whether they are only for the elite, high-class population.

North Korea has done surprisingly well in the Olympics for such a small country. First appearing in the 1964 winter Olympics, North Korea has since succeeded in winning 56 medals, including 16 Gold medals. Interestingly, in 2000 and 2004 North and South Korea joined to form a unified women hockey team, where political tensions could be put aside in the name of sport.

Supposedly the highest tier athletes in North Korea are given access to elite lifestyles and impressive sports facilities, which adds to the notion that one day perhaps skateboarding athletes could be given the same consideration.

Earlier in 2021, North Korea announced that it would not participate in the 2020 Tokyo Olympic games, following concerns around Covid-19. Subsequently, the Olympic Committee made a decision to suspend North Korea from competing in the 2022 Beijing Winter Olympics.

Kim Jung Un the current Supreme leader has a more westernised interest in sport, having been educated in Switzerland as a child. Kim Jung Un has a well documented personal interest in the NBA, which seems slightly contradictory for a political leader that controls a regime that protests their hatred for the USA.

Imagine the scene at an Olympic ceremony where one day perhaps North Korea beat the USA at basketball. If basketball, the all-American sport, can be accepted by the North Korean supreme leader, then why not skateboarding?

Now that skateboarding has been introduced into the Olympics as a recognised international sport with a series of different events, perhaps now is the time for North Korea to consider the sport more seriously.

After scouring the internet, it is clear that there are no recognised North Korean skateboarders, despite it being almost ten years since the introduction of their first skatepark.

Understandably, if any version of skate culture was to erupt in North Korea, similar to South Korea, the sport would have its own style and identity; just because skateboarding is very American, does not entail that North Korea would not allow the adoption of the positives it could provide ¢ much like their endorsement of global winter sports.

Skateboarding is particularly interesting because it arrived after the cold war, where Korean and American tensions were at their highest. Stemming from liberal ideals and the carefree Californian lifestyles, the skate, surf, hippy scene contrasted heavily with the North Korean regime. This begs the question, whether the skatepark in Pyongyang has actually been used since its construction.

What will the future bring?

For certain, skateboarding has only been very recently established internationally as a sport, particularly in the east. Moreover, indifference to other nations where most skaters can pick up their board and skate after school or on a weekend freely, nobody is sure what rules North Korean citizens must follow in order to pursue physical activity. Roller-skating is very popular in North Korea and there is online footage of the skatepark in Pyongyang busy with people, but there is not a skateboard insight.

It is questioned whether there are even skateboards being produced in North Korea, and so it is unlikely that people even have access to them. The skatepark consists of ramps, a halfpipe and grinds rails, all used specifically for skateboarding or BMX, but why build a skatepark for roller skaters? Supposedly it is possible to rent a very poor quality skateboard, but renting a board makes it very difficult for practice and absorption into the sport.

Perhaps time will tell whether skateboarding will take off in North Korea, a more gradual slope into finding its own skate identity might be necessary for the country. On the current curve of trajectory, it is likely that skateboards will be produced in North Korea soon, if not already; perhaps sparking a revolution.

Maybe in ten years time, we can expect to hear of at least one semi-professional skateboarder from North Korea. Maybe one day somebody will ollie the gap between North and South and clear the DMZ. That photo would certainly make the cover of Thrasher magazine, if not global news headlines. 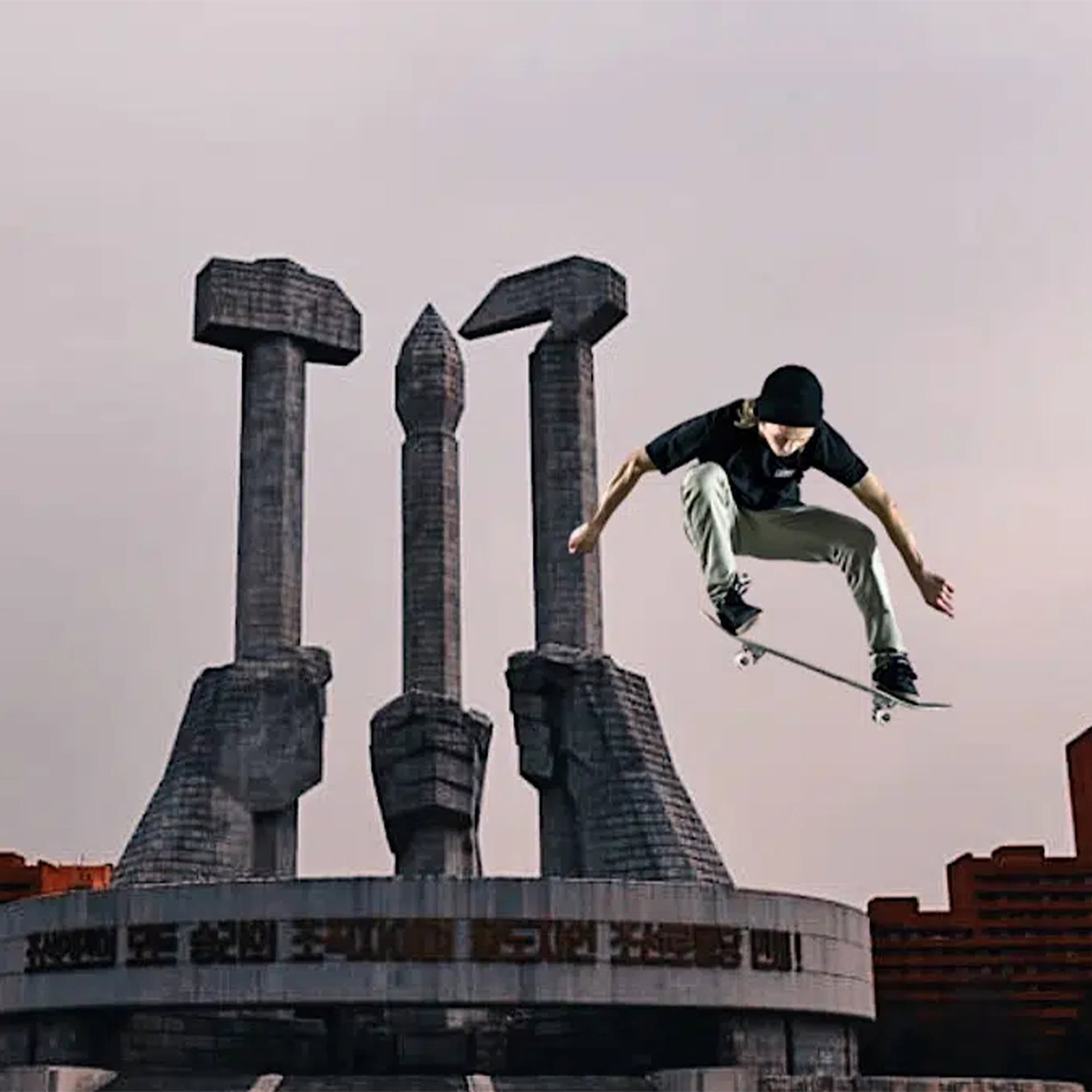