Skateboarding in Lafayette has been around for decades, but skateparks haven't been nearly as consistent. The city had a public skatepark previously but doesn't now, despite steady interest. Those that enjoy the sport wish that would change.

A few weeks after skateboarding for the first time, Harmon went with her friend to Rukus Board Shop, Lafayette's downtown skateboard shop, so she could have her own board. There she found a welcoming, encouraging community.

"I’ve made some of my best friends through it," the 19-year-old said. "No matter what age or gender everyone seems to get along."

"I wish we had better spots to skate at where we wouldn't get kicked out. They just built ledges downtown which is hopefully a good start to getting a skatepark," she said. " ... small towns like St. Martinville, New Iberia, and Abbeville have nice skateparks so I don't understand why Lafayette doesn't have one as well."

Lafayette hasn't had a skatepark for two years with the demolition of the Dust Bowl, a skateboarding bowl in the former Youth Park where University of Louisiana at Lafayette's The Heritage at Cajun Village apartments now stand.

The local skating community is hesitant to be hopeful for another park soon with current Mayor President Josh Guillory cutting the local parks and recreation funds.

In May, Lafayette Consolidated Government had 99 employees furloughed or forced into early retirement. Included in that round up was 36-year Parks and Recreation Director Gerald Boudreaux.

Boudreaux led the charge on creating the Dust Bowl. The public park was the first of its kind in Lafayette, opening in 2009 and officially removed in 2018.

Billeaud fought for decades to create Lafayette's last public skatepark, calling the local Parks and Recreation department since he was in sixth grade. Although he's a BMX rider, the Lafayette native wanted somewhere safe for everyone to ride.

The park went through multiple phases, as Billeaud learned how best to create a concrete skatepark in south Louisiana. He now runs a web site dedicated to Louisiana skateparks and plans on turning it into a nonprofit to help communities gather resources to create public places for skateboarders, BMX and other riders.

Although the bowl didn't have as many features as Buck Nutty's or The Levee, it provided a critical space where skateboarders were out of harm's way so they could meet to focus on riding.

In 2012, ULL acquired Youth Park when it sold the horse farm, now Moncus Park, to Lafayette Consolidated Government according to a UL document. The university was still "considering options for an alternative to losing the skate bowl" in 2018 according to the document.

However the bowl, Lafayette's last public skatepark, was filled. Since then, the only moves toward providing another outlet for skateboarding is the benches installed in Parc Sans Souci.

Three benches were replaced and made with concrete and had the edges reinforced with steel, square tubing. The project totaled $2,000, all of which came from Downtown Development Authority.

"Basically everywhere in the United States has a basketball court, has a soccer field, has a baseball diamond. It's because outdoor activities don't chart well as business models," he said. "It makes sense to be public with sports, and I think that obviously skateboarding falls under that category. I know that to be fact. I’ve seen it."

Over the past two years, there has been a local effort to raise money for another public skateparks. The Skate Park of Lafayette, a nonprofit solely dedicated to the creation of a public skatepark, was created in 2018 to raise awareness and funds.

So far, the grassroots organization has raised one percent of the $300,000 required to build the park they envision.

The price tag is on target according to Billeaud, who said funding is usually the largest issue for skate and bike parks. For Roberts, funding isn't the issue, it's LCG's level of interest.

But they agreed that in order to move forward, the park needs to be the "pet project" of someone with say in the local government.

"It’s really just about the government caring about a project that needs to be done regardless, that has already had such a huge movement," Roberts said.

Where did skateboarding begin in Lafayette?

Since gaining popularity in the 1960s, Lafayette's skating community has seen its fair share of skateparks. Varying in location, exclusivity, and features the parks have provided a safe space for skateboarders — sometimes from having to skate in public areas or even from difficult home lives.

Lafayette has produced numerous semi and pro skateboarders such as Shannon May, Charlie Thomas, and Christian Dufrene who carry on the rich cultural history of skateboarding in Acadiana.

"People see that and identify with it. It innately attaches something to people. And we don't have parks, so if you grow up skating here, you grow up really street-skating here. True grit of skateboarding is completely intact here. It sucks to grow up in it but it makes for a good skateboarder," Roberts said with a laugh. "But what happens is, when you do get that (bowls and parks) your mind explodes and you can’t stop."

Before the first official skate park in 1998, were a few skateboard and surf shops. Radical Dan's, a business near Lafayette's Broadmoor neighborhood, was John Zant's first introduction into the city's skating scene.

Known as Bag of Boards, Zant is a first generation skateboarder. When he moved to the city in 1981 for college, there were half-pipes and quarter-pipes spread across Lafayette.

"I've been doing it for 50 years now, must be something good to it," he said.

Cajun Skatepark, built in 1978 and only lasting a year, was on the corner of Eraste Landry and Bertrand. It was the beginning of private skateparks in Lafayette.

Ramps started to appear in Lafayette in the early 80s. 'Sugars,' a bar in Freetown, had one of the largest ramps. Others included 84 Lumber Ramp, Doug Lormands, Blaze Sonnier's General Gardner, Scott Bumpus, Mt. Taco, and Todd's Ramp according to The Independent article.

Following closely was the John Wayne ramp. The backyard half-pipe was built behind a trailer park on John Wayne Boulevard in the late 1980s.

Buck Nutty was the first bona fide skatepark of Lafayette, lasting into the early 2000s. In 1998, the skate ranch was host to features like a half-pipe and rails. Local bands and DJs would also play at the warehouse on Benoit Falgout Drive, where Interstate 10 is now.

Skate Spot was added to the Lafayette skating scene in the early 2000s. Next door was The Spot, an additional private skate park. This location would eventually be turned into Planet Ice Rink.

The Levee came about in 2015 with 11,000-square feet, ramps, rails. The park stayed at its Fightin'ville location for three years before falling to the same demise as other private Lafayette skateparks.

Roberts found his family in the Lafayette skating community. He currently runs Rukus in Lafayette, the same shop he grew up in.

Originally from New Iberia, Roberts moved to Lafayette in the mid 90s and started skateboarding with friends, that's when he really got interested in it. It was also a fun, easy way to get around town.

He attributes skateboarding to giving him an improved outlook on life. Having peers and being respected by them was a pivotal catalyst in Roberts' life.

"So yeah, I grew up skating and was just like a poor, little skate rat kid. It basically took me from this impoverished kid to … giving me a healthy space to see broader visions of what life can be and the beauty within it," he said. "The intrinsic goodness of being able to be accepted, even if it's by a group of freaks, it’s sick."

Lafayette's acceptance of art in many forms has been helpful to creating a thriving skateboarding community. He views skateboarding through that filter, calling it "ballet for dirty kids." The performance art has a medium unlike any other.

"It’s awesome because the medium is everywhere," Roberts said. "But ultimately, the evolution of it needs to involve a skatepark. People need legitimate safe skate spots."

When approached with the idea of adding skateboard-friendly benches to Parc San Souci, Roberts knew it was a step in the right direction. Adding multipurpose pieces to public places is important to normalizing the idea of a skatepark or of a public space dedicated to skating, BMX, and other riders he said.

A lot of the negative things associated with skateboarding are happening around skateboarding, not in skateboarding Roberts said, furthering the importance of creating a public space that is safe instead of brushing off skateboarders to a dimly lit cul-de-sac next to a coulee where sketchy activity is happening.

"I don't know what the push back on a local level is about but it’s always been there. I don’t know if it’s the negative connotation, the stereotyping, or a mix of the two," he said. "I'm sure it’s a bunch of things but inevitably, the experiences have led me to believe otherwise.”

The local skating community has shown him a different side. "I am the product of its benefit," Roberts said. 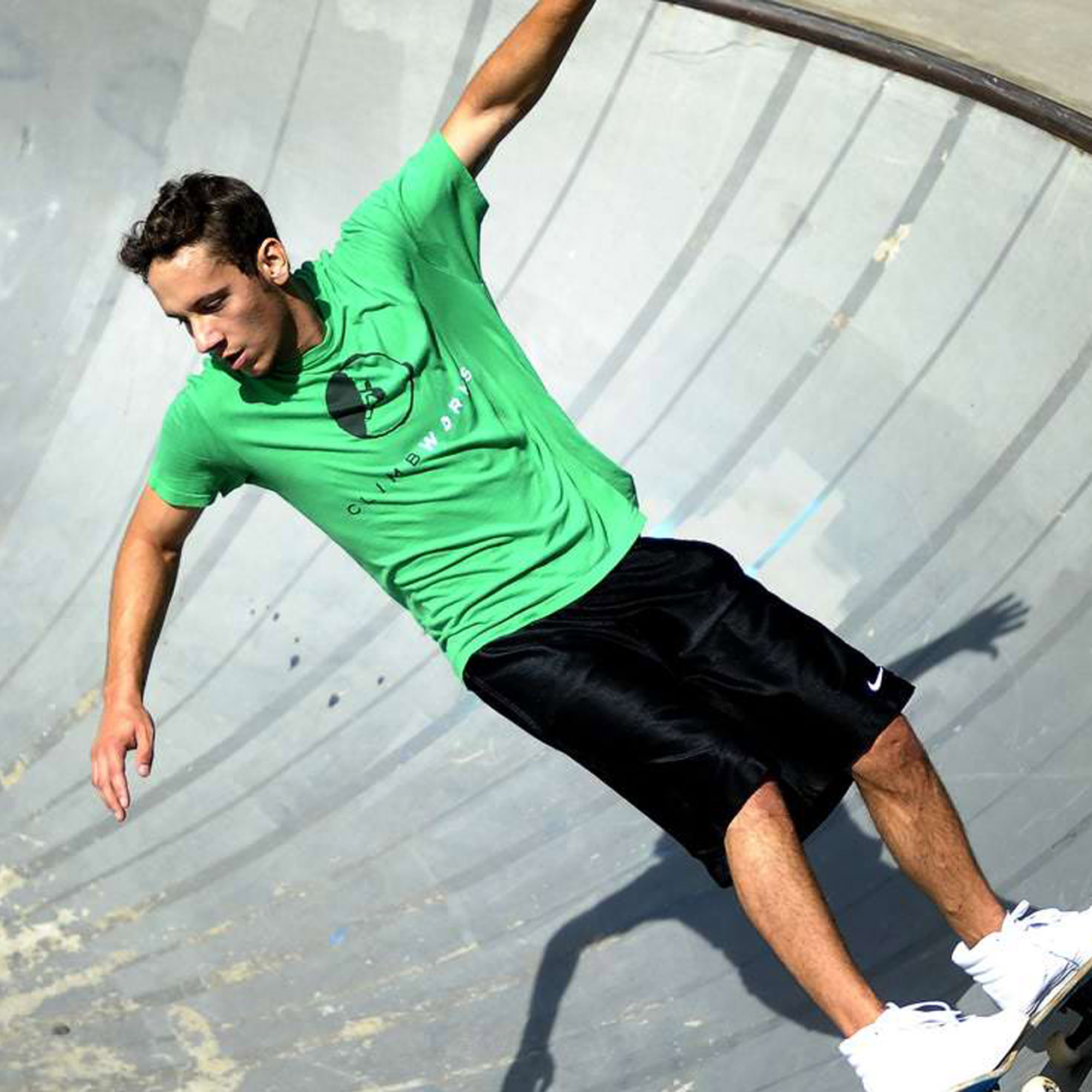