Janwaar, a small village in Madhya Pradesh, is home to the first rural skate park in India. Adults and children alike here have wholeheartedly taken up skateboarding.

Skateboard is a sport that originated in California, United States, in the late 1940s. It is primarily a city sport which is played in skate parks and the bumps are the important accessories to allow the skateboarders show off their skills.

In a country like India, especially in rural areas where even the basic infrastructure like good, well-metalled roads or footpaths are rare, getting a dedicated and fully equipped space for skateboarding is a tough task. But in April 2015, the residents of Janwaar in central India were gifted a skatepark by a German community activist, Ulrike Reinhard.

Janwaar Castle is the first rural skate park in India, located at the eastern zone of Panna National Tiger Reserve in Madhya Pradesh. Janwaar is a village that doesn’t have proper electricity poles and gets only a few hours of electricity in a day. Its landscape is littered with unfinished brick houses and with thatched mud structures, while there is a dramatic lack of sanitation facilities and many more problems in the village.

But while it may not have many of these essential and basic facilities, Janwaar does boast of a modern, world-class area for skateboarding. Janwaar Castle was set up in an open place, where anyone could plug-in and play. Just over six years after it was set up, almost every single child has enjoyed racing up and down its smooth bumps on their skateboards. Another unique aspect about the skateboarders here is that they all are self-taught as no special trainer was ever hired to teach them the art of skateboarding in the beginning.

Belonging to Janwaar, Shailenda Yadav is one of the skateboarders, who just went with a curiosity to Janwaar Castle, began skateboarding himself once he had seen others do the same. Over the years, he has taught himself having constantly watched others master the art. He also watched several videos to learn skateboarding tricks. After years-long practice, Yadav holds gold medal in Skateboarding in National sports competitions.

“At the time when Janwaar Castle was constructed, I just went randomly and started to skate, it all started just as a fun, by falling and rising so many times. Then, I slowly started to learn the tricks by watching videos and understood the importance of sports. Now I want to make my career in this sport further,” Shailendra Yadav, 18, from Janwaar tells Media India Group.

Janwaar village has a mix of tribals and Yadav community, where casteism and gender inequality are common and people are divided over caste lines.

“In the beginning, there was a lot of casteism in Janwaar Castle and everyone was involved in it. So, it was decided that the tribals and non-tribals would play separately and there were different timings when the two communities could use the skate park. Over the years, however, it changed and now we play together and eat together,” says Yadav.

At Janwaar Castle, the children follow a strict policy of “No school, No skating” which ensures that all the children at the skatepark should regularly attend the school. In this manner, there has been an increase in attendance rates of the students. To motivate the children and to make them understand that education is equally important, the operators of Janwaar Castle initiated this policy.

Another one rule is “Girls First”, to provide an equal opportunity and to motivate girls. Earlier, there were only 22 skateboards and number of children very high. This led to a discrimination against girls who often did not get the chance to participate, so to boost their skill the Girls First policy was introduced, and it is followed till today. The skatepark attracts 50 to 60 children every day.

“Whenever I take leave from school, then I don’t get any chance to do skateboarding that day, so I attend school regularly. Children, who don’t go to school, they are not allowed to skate. Now there are few children in villages, who don’t participate in skateboarding,” says Yadav.

Children in Janwaar start their training from the age of five and practice every day. “Now everyone in Janwaar, has their own skateboards and they spend around 3 hours every day in the skate park,” says Yadav.

In 2016 skateboarding was added to the list of sports at the Olympic Games and the sport made its debut at the 2021 Tokyo Olympics for the first time. “At a certain point of time, I wanted to do skateboarding because I personally love this sport. It is highly individual sport. I don’t need someone to help in my practice in this sport. Whenever I stand on skateboard, my practice starts from there. I fell so many times, but got back on my feet on my own, whenever I learn any new trick it is an undescribable happiness for me,” Anubhav Vijayvargiya, skateboarder and lead manager of Roller Skating Federation of India, who is also a national-level coach, tells Media India Group.

“I am doing skateboarding for almost 7 years now, I learnt many new tricks. I fell and also I broke my hands while learning, but never stopped skateboarding. I feel like I am flying when I am on a skateboard,” says Vijayvargiya.

In Janwaar, Vijayvargiya has been working as a coach for the past four years and trains children to prepare them for various sports competition.

“The children in Janwaar play very well. Whenever I go there, I teach them many new tricks in an easy way and with the support of the Roller Skate Federation Association, we also conduct many competitions there. The child who wins all the rounds, gets a chance to participate in many state-level sports competitions too,” says Vijayvargiya.

“The difficulty levels increase when we try to teach new tricks to children, then injury is the very first thing that happens. Sometimes we break our hands or legs while practicing, then it becomes more difficult to practice. Then to level their difficulties, we make them practice on short and big bumps in the skating parks. I always give my best and try to teach children without them getting hurt and quickly, so that they will get excited to learn more new tricks” says Vijayvargiya.

India currently has 17 skateparks in 11 states and many of them are already in rural settings. And trainers and players say that increasingly new skateboarding parks are coming up in rural areas than the metros.

“Compared to urban areas, participation in skateboarding sports is increasing faster in rural areas. For an example one of my friends is a trainer at SISP Kovalam Skate park in Kerala. It is also located in a rural area like Janwaar, the children there belong mainly to backward classes family, but they do very well, and I have seen their performance. More skate parks with high and big bumps are needed in India in order to provide better practice to skateboarders,” says Vijayvargiya.

Children in rural area have more interest and zeal to participate in sports and they get a sense of freedom while participating in sport activities, which is one of the main reasons why they are attracted to it. “Now many children are taking to this sport in a serious way and many of them want to make their future in sports. Their training times have increased too. Whenever I go for a camp to Janwaar, I hold practice sessions for them for three to four hours in a day,” says Vijayvargiya.

The students are responding well and are motivated to excel in a sport that gives them a sense of freedom and achievement. “Now I am practicing for an upcoming sport competition, it is in the first week of November. I am practicing for five hours every day and our trainer Vijayvargiya sir helps me in my training and teaches me many different techniques,” says Yadav. 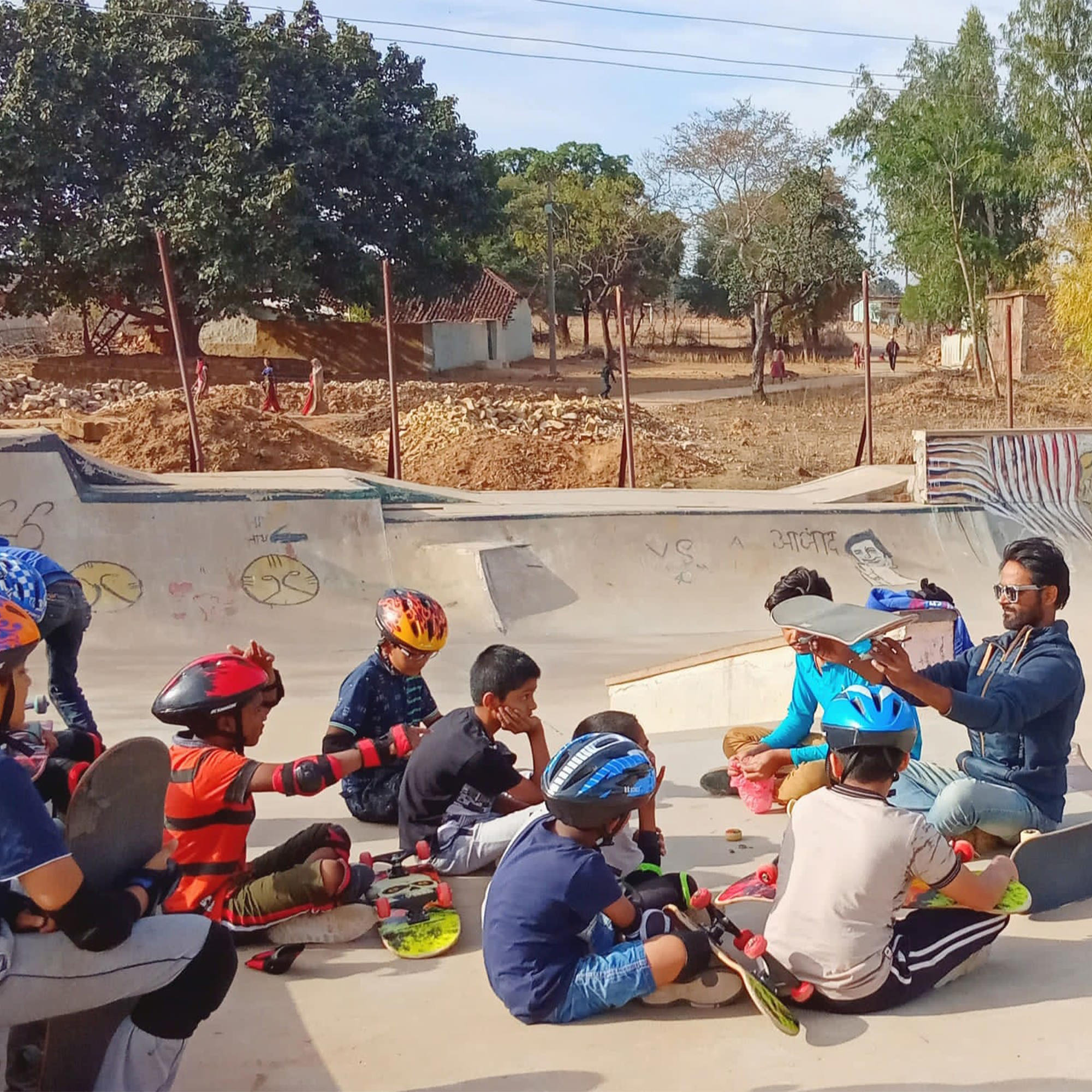