What do Skateboarding and Global Health Have in Common?

What do Skateboarding and Global Health Have in Common?

KAMPALA, Uganda – Jackson Mubiru showed his brother, Nsubuga John, the schematic of a skateboarding park. “Can you build it?” Mubiru asked. The concrete course of jumps and ramps was like nothing the brother had ever seen. At that time, in 2005, the closest skatepark was two thousand miles away in South Africa. But Nsubuga John was a construction engineer who had tackled more difficult projects. “If you get the materials,” he said, “I will build your...what is it called?”

“Skatepark, brother. My very own skatepark.”

Over the past 20 years, skateboarding’s popularity has exploded thanks, in part, to organizations like Skate-Aid and Skateistan that build skateparks in developing countries around the world. The sport has proven to be more than just a fun past-time; skateboards can be vehicles for everything from female empowerment, to education, to the prevention of infectious diseases. And with skateboarding included as a medal sport at the 2020 Summer Olympics in Tokyo, Japan, the sport’s reach will likely grow.

Today, Kitintale Skatepark stands in the heart of Kampala, Uganda, teeming with youth skateboarders at almost every hour of the day. Many of them were taught by Mubiru, who founded the Uganda Skateboard Union, a nonprofit group that’s now built skateparks across East Africa, including Kenya, Rwanda, and Tanzania.

“Skateboarding is not a sport – it’s an ‘encourager,’” Mubiru says. “It helps you to remove fear from your heart."

Kitintale Skatepark has become an unofficial youth center for the neighborhood. Health officials treat it as a “community outreach site” for everything from bed net distributions, to vaccination drives. It’s part of a revamped strategy to connect with people in their communities, instead of waiting for them to visit a health clinic.

But the issue that strikes closest to Mubiru’s heart is protecting Kampala’s youth against HIV/AIDS. Several of his skateboarders have HIV. Some were born to mothers with HIV, while others were infected as young adults from unprotected sex. For Mubiru, one case haunts him every day: his brother, Nsubuga John, who died in 2009.

“He thought someone had bewitched him,” Mubiru says. Before HIV was understood, a folklore arose in Uganda that a person could become deathly sick because of a hex. “He refused to go to the hospital.”

Nsubuga John’s death came during an era of dramatic improvement in Uganda’s battle against HIV/AIDS. From 2000 to 2017, the number of AIDS deaths dropped by 65 percent and the number of new HIV infections dropped by 28 percent.1 Helping drive that progress was the Ugandan government’s partnership with The Global Fund for distributing antiretroviral therapies (ARTs), medicines that help people live with HIV.2 Since 2004, the number of people on ARTs has increased from 6 to 72 percent.3 The program has especially helped pregnant mothers with HIV, of whom 90 percent are on ARTs.4 That, in turn, has driven down the number of babies born with HIV by 58 percent.

Kitintale Skatepark holds HIV fairs when health workers teach HIV awareness, give free blood tests, and hand out condoms. Mubiru keeps his brother's memory alive by raising his nephew and niece, both of whom are HIV-free. “They are great skateboarders,” Mubiru says. “Their father would be so proud.”

SALT LAKE CITY, Utah – The announcer at the Vans Park Series World Championships clearly enjoys saying the first name of Bunga Nyimas Cinta, the 13-year-old skateboarding phenom from Jakarta, Indonesia. She won the Asia regionals competition, held in Malaysia, to advance to the world championships. “Next up, it’s Bunga, Bunga!”

Standing on the edge of the bowl, her skateboard hovering over the precipice, Bunga knows she needs to land her most complicated tricks for a chance to advance to the final round. She leans forward onto her skateboard and “drops in,” the rush of air causing her sports burka to flutter. The timer starts counting down.

Bunga’s homeland, Indonesia, has been racing a clock of its own to beat malaria. It has the world’s highest malaria burden, for all countries outside of Africa. It is home to 25 species of mosquitoes which can host all 4 species of Plasmodium, parasites that infect humans with malaria.

In 2004, an earthquake deep beneath the Indian Ocean triggered a tsunami that devastated the Indonesian archipelago, killing nearly 230,000 people. It was the 7th most deadly natural disaster since 1900. In the tsunami’s wake, large amounts of standing water served as breeding grounds for a boom in the mosquito population, resulting in a spike in malaria-related deaths. The number of confirmed cases doubled from 4 to 8 per 1,000 people. That year, The Global Fund ramped up its delivery of mosquito bed nets to Indonesia, of which it’s now distributed nearly 65 million.6

The bed nets worked. Between 2012 and 2017, the number of malaria cases dropped by 38 percent. For those who did get the disease, the rollout of artemisinin-based combination therapies (ACTs) increased their chances of survival. The improvements were even more dramatic over the long term. Since 1990, Malaria deaths dropped by 31 percent and health officials declared malaria eradicated from the main island, including the major cities of Bali and Jakarta.

There is trouble on the horizon. In 2016, health officials in neighboring Malaysia reported malaria outbreaks attributed to a fifth species of bacteria that mosquitoes can transfer between monkeys and humans. In 2018, the first case of “monkey malaria” was confirmed on the Indonesian island of Sumatra. The strain responds to ACTs, for now, at least.

Equally troubling, health experts started noticing trends in malaria resistance. In 2010, mosquitoes started showing resistance to the insecticide “pyrethroid,” commonly used in bed nets.7 And, in Cambodia, a group of malaria patients didn’t improve when given the standard package of ACTs. The Mekong Region has been a known reservoir of drug-resistant malaria since the 1950s. Now, it appeared to be advancing through southeast Asia. Scientists were able to create a new package of ACTs that worked against the strand, but know it’s years of effectiveness could be numbered.

In 2015, The Global Fund joined forces with the WHO to make an end-run around the Mekong malaria’s expansion. The plan is to eradicate the parasite, Plasmodium falciparum, to make the Mekong region malaria-free by 2030. In skateboarder speak, the plan is to “go big.”

The admiration from her fellow skaters is evident, giving her fistbumps. One of the announcers says, “These girls are for real, y’all. Don’t matter where they come from.” Bunga takes the disappointment in stride, feeling motivated to get back to Indonesia and continue training. Because when you get that close to landing so difficult a trick in international competition, you know success is within reach.

MAZAR-I-SHARIF, Afghanistan – The sound of skateboards echo in the gymnasium of a school, Skateistan, that features skateboarding as part of its female empowerment curriculum. A teenager, Atefa Hussaini, speeds down a skate ramp about to attempt a trick known as a “kickflip” – never before landed by a female skateboarder in Afghanistan. She has bruises on her arms and legs from past attempts. They are badges of courage, she says, not wounds because you can’t succeed in life without the risk of falling.

If mastering a kickflip is hard, equally difficult was convincing Atefa’s parents to let her attend Skateistan. “They told me I was not allowed,” she says. “They thought it was only for boys.” Atefa kept asking her parents, extolling the virtues of an active lifestyle and getting an education. It also helped that skateboarding was so new to Afghan society that it was viewed as a “game,” not a “sport” – what Skateistan’s founder, Australian skateboarder Oliver Percovich, calls a “cultural loophole.” Atefa’s parents relented.

Twenty years ago, the sight of a teenage girl practicing skateboarding in Afghanistan was unimaginable. This year, Atefa was invited by the Asian Olympic Committee to represent her country at an Olympic-sanctioned skateboarding camp in Nanjing, China. It’s a sign of how much progress Afghanistan has made in improving the lives of its female population. Since 2000, infant mortality among girls has halved from 84.3 to 47.4 deaths (per 1,000), and the number of girls attending school has increased by 3 million (40 percent of all students). The overall life expectancy for women has gone up from 56 to 65 years.

Eradicating polio, though, is the trick Afghanistan is having trouble landing. It is one of the last countries in the world that still has the wild poliovirus, with frequent outbreaks in the southern and eastern regions of the country. The only other nation that has never stopped wild polio is Pakistan, neighbor along Afghanistan’s eastern border, which has faced its own set of challenges. In 2014, Pakistan saw an outbreak of 306 polio cases, up from 93 the year before.9 The Global Polio Eradication Initiative has been fighting back the outbreak ever since. The case counts fell significantly from 2014 to 2018, but there has been an uptick in 2019.

There have been positive steps. Of the three types of wild poliovirus, Type-2 is extinct thanks to global eradication efforts. (Type-3 has not been seen since 2012 and is very close to being declared eradicated.) And Nigeria, long considered a third polio-endemic nation, alongside Afghanistan and Pakistan, has just gone three years without a case. As wild poliovirus’s final ground in Africa, Nigeria’s success opens the door for the entire African region to be certified wild polio-free in 2020. The Nigerian government and its partners remain vigilant to see that certification through.

Skateboarding, in a way, could be Afghanistan’s secret weapon because empowered girls grow up to have “loopholes” of their own. It’s culturally acceptable for a woman to enter a home or give health treatment to another woman (and her children), even when the husband is not there. In places like the province of Kandahar, a stronghold of wild poliovirus, five-women vaccination teams can reach nearly 150 kids a day. Male-led campaigns don’t perform as well because they must skip a home where the man-of-the-house is not present.

Through the work of GPEI, women now comprise 34 percent of frontline health workers in Afghanistan.10 Their increased involvement has been key to building community trust, helping drive up polio vaccine acceptance rates to 98 percent.11 In partnership with USAID, the national government launched the Promote Women in the Workplace program, which is training more women every day to work in hospitals, clinics, and as vaccinators.

However, the biggest obstacle to stopping polio in Afghanistan is conflict and war. Periodically, polio vaccinators are banned from going door-to-door in certain areas. The GPEI adapts by holding vaccination campaigns in safe places like mosques, hoping the disease doesn’t spread during the lapse in coverage.

Back at Skateistan, Atefa rides her skateboard across the gymnasium floor. She crouches low to the deck in a power stance, then launches into the air. With her heel, she kicks the board just right so it spirals through the air beneath her. After 100s of attempts, she lands atop the board and keeps her balance. The gymnasium erupts with the sound of cheering. Soon, a video of Atefa is posted to Youtube: “First Afghan girls EVER to land a kickflip!”

Equally notable, Atefa will soon become the first female in her family to graduate from high school. “My family’s minds have changed about girls’ ability,” she says. “Now I can do everything that my brothers are doing. I hope that all the parents around Afghanistan know that girls have the power to do anything boys can do.” 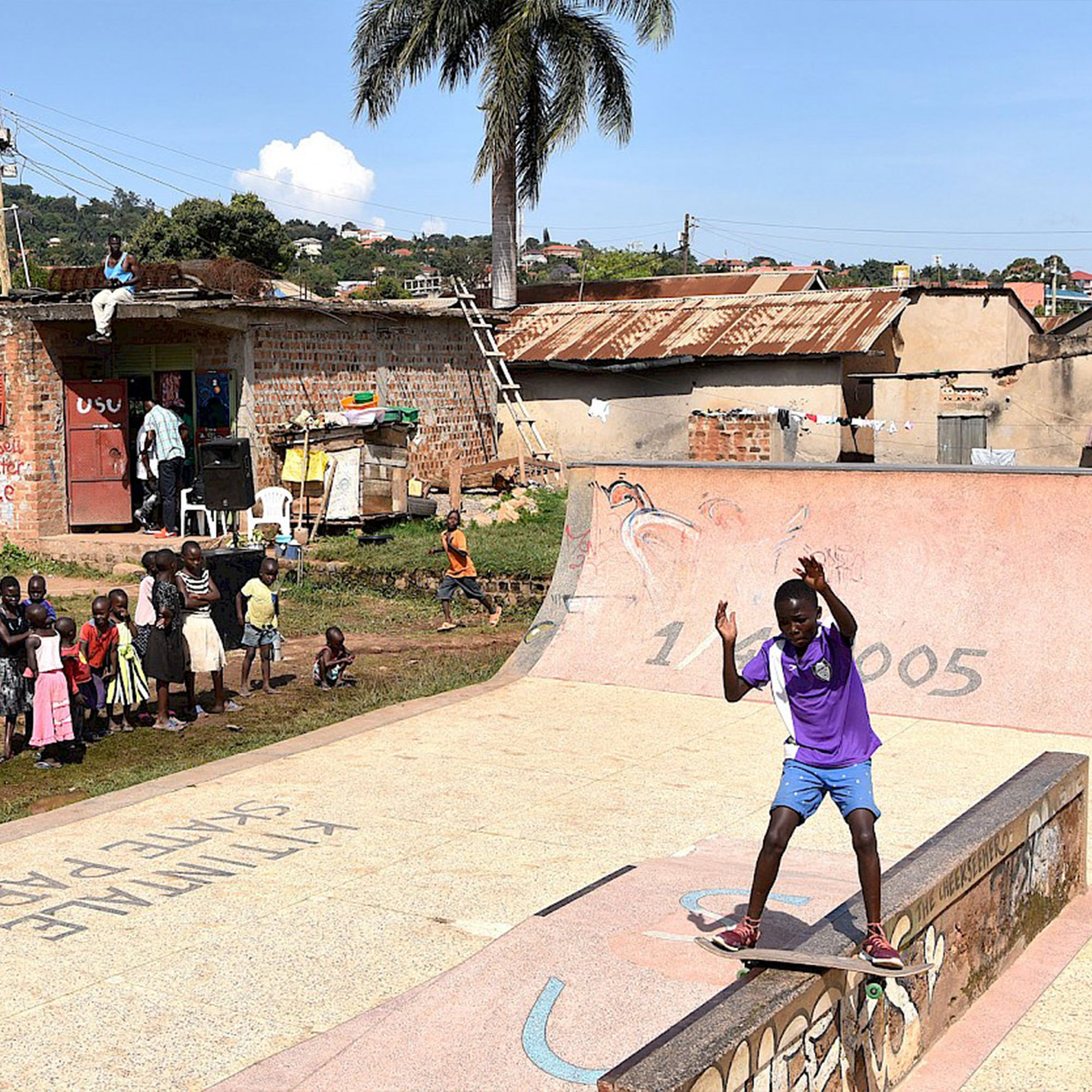