In 1958, skateboarding emerged in Southern California as “Sidewalk Surfing”. Originally invented as a way for surfers to practice their skills on land, small wooden boards equipped with metal wheels took over the streets of SoCal.

In the 1970s, a group called the “Z-boys” revolutionized the skateboarding world and we owe them credit for paving the way for skateboarding, as a whole. The group of unsupervised teenagers from Santa Monica were sponsored by a local surf shop, forming one of the first ever skate teams. With the introduction of urethane wheels, the group discovered that they could skate the walls of emptied swimming pools, an idea that laid the groundwork for modern day skateboarding and skatepark design.

What many fail to realize is that skateboarding is so much more than a sport, it's a culture and a lifestyle. From its inception, us skaters have been largely misunderstood. Historically, they’ve been shut out of public areas and judged for their  “recklessness” and “laziness”. In the late twentieth century, the media shaped other people’s perceptions of skateboarding and skateboarders in a negative way, framing it as dangerous and deviant. These attitudes are less of a product of reality than they are one of ignorance.

In reality, skateboard culture has sparked numerous popular culture trends -- from the way they  talk to the way they dress, the movies they watch and the music they listen to, skateboarding influences us more than we know. Skating is undeniably controversial, but in the eyes of young people (and the brands that try to attract them), it is also undeniably cool. Kids strive to emulate the effortless confidence skaters exhibit in their lifestyle and sport.

Skateboarding is a very unique sport in that there are no referees, coaches or constant supervision. Typically, skaters are individuals who value individuality, creativity and freedom. They are also known for an unrelenting dedication to progressing the sport as a whole. Instead of trying to one-up each other, they  often encourage fellow skaters and embrace individuality. Skater’s laid-back counterculture attitude and grit may be what makes them  so “cool” in modern day society. They  are entirely consumed by their  sport, unbothered by the opinions of others and the marketing efforts of brands trying to entice them .

As the use of social media has blown up, skateboarding has gained increased exposure and popularity. Lots of skaters create videos showing themselves mastering their tricks, teach others how to skate and show off their sense of style.

Though it may seem odd, skateboarding and fashion have always gone hand in hand. Skaters pioneered loose-fitting clothes, chunky sneakers and modern street style in addition to a number of other fashion trends. Countless brands copy and mass-produce aspects of skateboarding culture. Dubbed as “culture vultures” by the skateboarding community, brands who appropriate skate culture have molded the sport as cool in the eyes of popular culture, increasing its popularity and idealizing the lifestyle.

Most skateboarders remain unphased by these marketing tactics, continuing to practice the sport and avoiding, and sometimes condemning, brands that promote skateboarding inauthentically.

There are endless benefits that come from diving into skateboard culture. First and foremost, joining the skateboarding world can offer a sense of community. As long as you are carrying a skateboard, you can make friends and find belonging almost anywhere in the world. It’s as if there is an unspoken, immediate bond between skateboarders that transcends race, gender or socioeconomic differences.

Through making friends at local skateparks, you can cultivate a network of people who motivate you to learn new tricks and be the best skater you can be. Visiting skateparks fosters a sense of healthy competition that pushes athletes to get out of their comfort zones and consistently progress at their craft. It’s worth mentioning that before you visit a skatepark, make sure you are up to speed on skating etiquette. Skaters are a welcoming bunch so long as they don’t feel disrespected in their parks.

Skateboarding can also be the perfect outlet for people who do not excel in traditional team sport environments. For many kids, taking up skating keeps them out of trouble and provides a supportive community, a healthy outlet to combat boredom and depression, and instead inspires creativity. The highly individual nature of skateboarding allows kids to meet like-minded friends who support and challenge each other to reach their potential.

Once kids successfully enter the skateboarding world, there are a plethora of exciting things that will likely come their way. One of the most exciting aspects of the skateboarding world are skate trips. During these, friends visit skate parks in different cities or travel to unique skating destinations around the world. At their most extreme, skate trips can become multiple month long backpacking trips through other countries. For the less travel-inclined, it could also look like driving to the next town over to visit a new skatepark or skate spot. In any case, skate trips serve to expand the skater's network of friends, create lifelong memories and learn life lessons.

Though skateboarding is a highly individual sport, oftentimes, it is most rewarding when done with friends. The bonds skateboarders create with one another are extremely unique. Skate friends understand the creative, risky nature of their sport and bond through motivating themselves and each other to be better. For many skaters, finding friends is a matter of finding people who share their dedication to the sport. In some sense, skateboarding is the great equalizer, fostering connection across people and groups no matter their differences.

Creating a network of friends to skate with also leads to new opportunities and experiences. Like we mentioned earlier, making friends may present exciting travel opportunities. In addition, having friends can be a great way to have someone film your tricks or take action shots while skating. Once you get into skateboarding, you’ll probably learn other valuable skills like photography, videography or music production. Sometimes, these skills can lead to extremely creative, fulfilling career paths.

To get a better sense of the tight-knit skateboarding community and how it fosters community across people of completely different backgrounds, check out the “We Are Blood” trailer narrated by Paul Rodriguez, an extremely revered skateboarding professional and icon. Rodriguez represents all that the skateboarding world is for its members: community, individuality and hard work. In “We Are Blood”, he describes the instant sense of belonging skateboarding creates for people, “When you meet any skateboarder no matter who they are across the world, you have that relationship with them. It’s like an unsaid thing.”

DIVERT is a great place for young athletes to learn how to skate and build a community of friends. At Divert, we provide a safe, constructive environment for everyone to develop skateboarding skills. A DIVERT core value is cultivating a sense of community among our athletes and ensuring they reap the social benefits of skateboarding and well as the proper techniques. DIVERT help anyone find and hang with other like minded athletes in the skateboarding community and beyond. 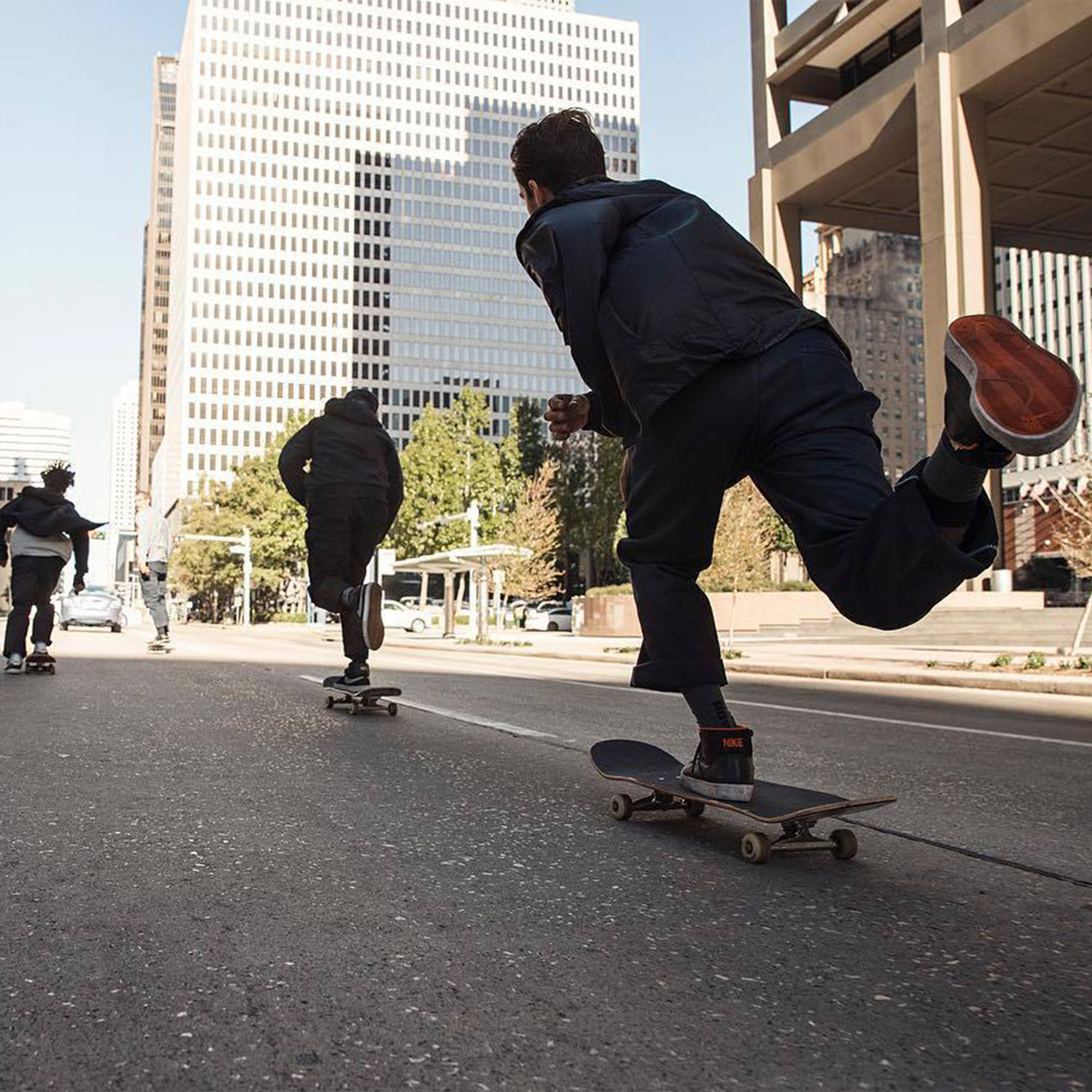