While her kindergarten classmates spend their free time playing with blocks and running around outside, Paige Tobin has been busy dropping into 12-foot high skateboard ramps, amassing a burgeoning online fanbase, and challenging gender stereotypes.

Paige, 6, of Lake Macquarie, Australia, nabbed the world's attention last week after an Instagram video of her skating in a pink dress collected more than 1.4 million views. It featured Paige dropping into a skate ramp while a young boy looked on in amazement.

The video showcased skills that Paige has been honing since she discovered her mom's old skateboard roughly four years ago.

"When Paige was about 2, she picked up an old skateboard in the garage and started standing up on it," her mother, Emma, told CNN over Skype. "It kinda started there."

In that short period of time, Paige has won the King of Concrete skateboarding competition in Melbourne in the under-9 field and scored a handful of sponsorship deals with S1 Helmets, Pride Socks, and Fringe Skateboards, to name a few.

"Paige is definitely skating exceptionally well, not just for the age but for skateboarding in general," said Neftalie Williams, a lecturer at the University of Southern California Annenberg School of Communication and Journalism who studies race and diversity in the world of skateboarding. "Those kinds of moments are when people see that skateboarding is for any age and any background. It shows that skateboarding is globally accessible."

Paige, whose family lives along Australia's southeastern coast, said skateboarding makes her "really happy" and one trick she's been working to master is a move called a blunt to fakie. The trick involves riding the board up to the edge of a ramp, stalling the board on the ledge while balancing on it and then popping the board off the ramp to ride back down.

The skateboarding community has come a long way in encouraging females and non-gender conforming people to join the sport. Yet it still has farther to go.

Firm figures for the current number of females and non-gender conforming skateboarders across the US are not available. But a 2017 study called "Beyond the Board: Skateboarding, Schools, and Society," co-authored by Williams of USC, cited figures from the Sports and Fitness Industry Association (SFIA), which found that "male participants accounted for roughly 4.6 million skateboarders, while female participation was noted at approximately 1.7 million."

"In that same report, SFIA highlighted that 77.8% of males and 22.2% of females who completed the survey identified as core/frequent (more than 26 times a year) skateboarders," the study said.

One of the recent developments that helped change skateboarding's perception was the Olympics, Williams said.

In 2016, the International Olympic Committee added male and female skateboarding as a summer Olympic sport starting with the Tokyo games. This gave the sport a new level of legitimacy and exposure, Williams told CNN over the phone.

"One of the most important things about seeing Paige skating is how it's a reminder that there has been an explosion in women, girls and gender non-conforming skaters as well," Williams said. "That has really shaped and changed the way people perceive skateboarding culture."

The threat of injury "goes through your mind"

Paige pointed to Brown, of England, as her biggest source of inspiration. But her skateboarding hero has also shown Paige -- and Paige's family -- that the sport isn't without risks.

Brown suffered severe injuries in June 2020 after she was filmed taking a bad fall during training.

The video shows Brown flying off the end of a half-pipe while traveling at high speed. She suffered skull fractures and broken bones in her left wrist and hand in her fall. She was taken to the hospital by helicopter.

Brown, who was 11 at the time, posted a video on her Instagram and YouTube channels with a clip of her spill and an emotional message from her hospital bed.

The sight of Brown's spill caused Emma to stop and think about Paige's skateboarding.

"It definitely goes through your mind, 'if anything were to happen to her, would I blame myself?'" Emma said. "I just have to hold my breath and keep rolling with it."

Paige and Emma rolled over to Sydney this weekend to put on a skateboard demonstration. The pair have plans to visit the US this summer to do some photography, film work, and hopefully meet one of Paige's other skateboarding idols, Tony Hawk, Emma said.

For any young people thinking of getting into skateboarding, Paige had this piece of advice: "Never give up." 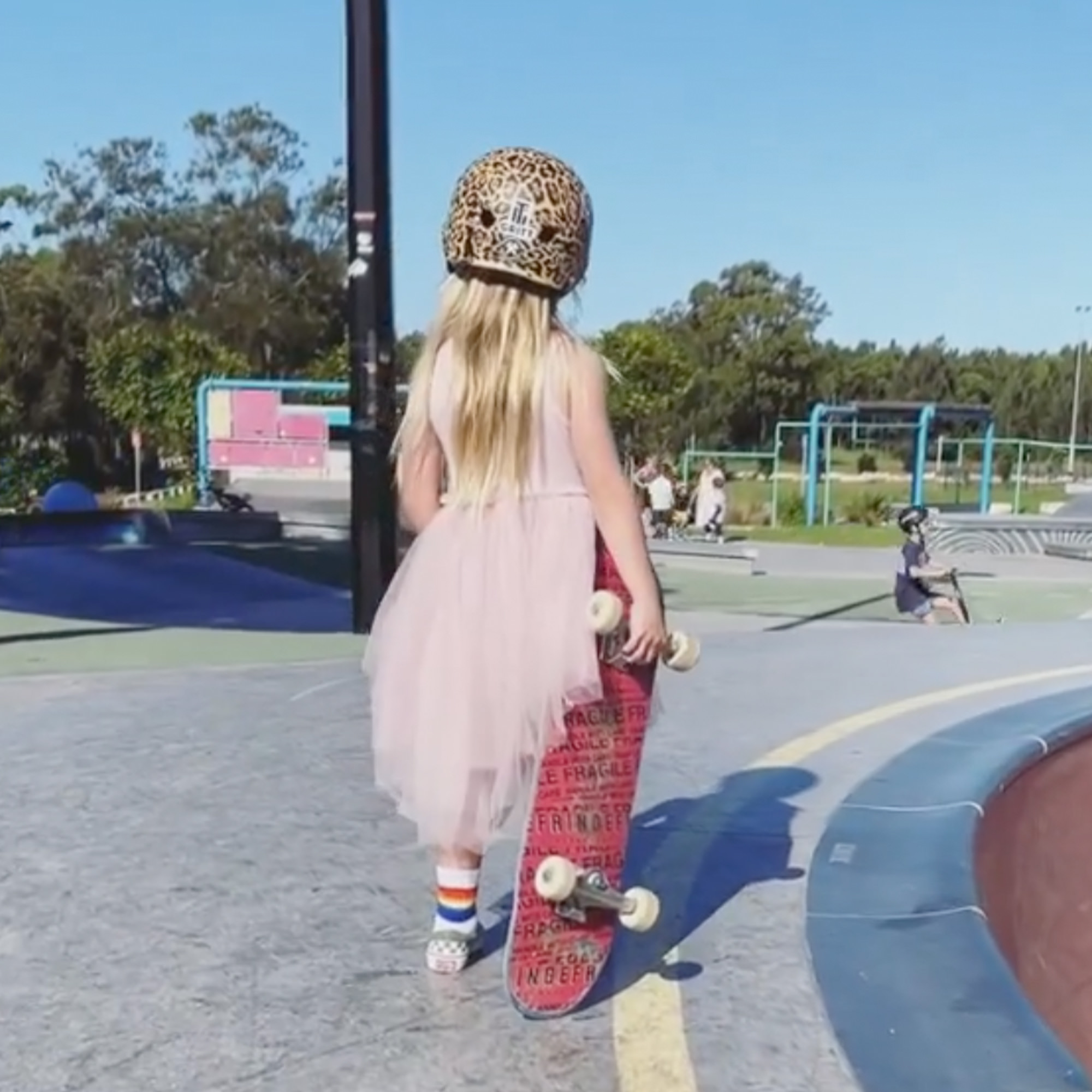