If you walk into the Museum of Modern Art’s gift shop today, you’ll pass Keith Haring mugs and Yayoi Kusama snow globes before reaching a section dedicated to artist-designed skate decks. The decks — meaning the wooden body of the board where you plant your feet — are often printed with pre-existing paintings and drawings by household names like Jean-Michel Basquiat and Andy Warhol, as well as more contemporary darlings like Raymond Pettibon and Jenny Holzer. Each deck features the eight holes used to set skateboard wheels, so they’re technically skateable, although that’s discouraged. Instead, these objects are meant to hang on the wall, like a painting or a print. But while an unframed Warhol poster of a Campbell’s soup costs $16.99, a deck with the same image will set you back $199.99. How did the skateboard, that sturdy piece of equipment used in a sport known for injuries, become the expensive version of an artist’s print?

The first artist-designed skate deck came out in 2000, when the streetwear brand Supreme launched its “Artists Series.” The underside of decks had been adorned since the 1970s as a way to mark brand identity and skater individuality. But Ryan McGinness’s edition was the first time a deck was designed by an artist who had emerged in the sphere of contemporary art galleries and museums, rather than the skateboarding scene. Titled Supreme Color Formula Guide, it made full use of the deck’s unique oblong shape, creating a supersized Pantone color scheme with whiffs of Pop Art and Minimalism. The edition marked a departure from the dominant trends in skateboard deck art at the time, which were cartoonish if not outright pornographic or satanic. Yet McGinness’s deck still had elements of youthfulness and humor.

Since then, artist-designed skate decks have continued to straddle their origins as a countercultural sport and their developing status as a luxury product. Today, The Skateroom, an artist-designed skateboard manufacturer, creates two types of skate editions: solo skateboards and triptychs. Triptychs are an evolution in the form in which an artwork is printed over several decks, the final arrangement referencing the devotional paintings of the Renaissance, like a modern altarpiece. According to the company, most of the triptychs remain on the wall, while a third of the solos are actually used for skating.

“The decks do have a certain price, which means that everyone doesn’t skate with them,” The Skateroom founder Charles-Antoine Bodson told ARTnews. Their solo decks begin at $160 and triptychs at $435. Moreover, “when the decks are offered for sale in a museum, we are addressing more to someone who’s interested in the culture or the artwork” — in other words, not your average skater. There is also a generational divide: “The medium speaks differently to someone who is 15 or 25 than someone who is 45 or 65, who would directly link it to the skating world.”

Some artists are starting to play with the material of the skate deck itself, pushing its functionality to the limit. Chris Ofili laser-engraved his deck with Martín Ramírez-like waves and used a paint normally reserved for automobiles. Others forsook the traditional maple wood material: Walead Beshty used copper for his deck, while Jenny Holzer, created a marble skateboard engraved with the word IMPEACH following Donald Trump’s election. It retails at $10,000, and you certainly couldn’t skate with it.

Bodson continues to encourage artists to experiment with decks and use them as any other medium with a predetermined shape, like an A4 sheet of paper or stretched canvas. The Skateroom is designing a special-made silkscreen machine to use on skateboards. “It’s going to be a great tool. It’s going to let us produce something closer to an art edition, a true one,” Bodson said. The painter Jules de Balincourt is apparently looking forward to trying it out.

As artists are given full reign and new tools to experiment with the skate deck; the sports equipment often retains only its oblong shape, still more or less ready to skate. Yet even the most unskateable skate decks still hold onto some of the object’s original countercultural aura. Presented in the form of sports equipment, artworks that might otherwise feel conceptual, stuffy or cold in a blue chip gallery or an auction house can appear accessible and cool. The skate culture has an inherent meaning all its own, Bodson said. “I’d like those decks to continue to say something.” 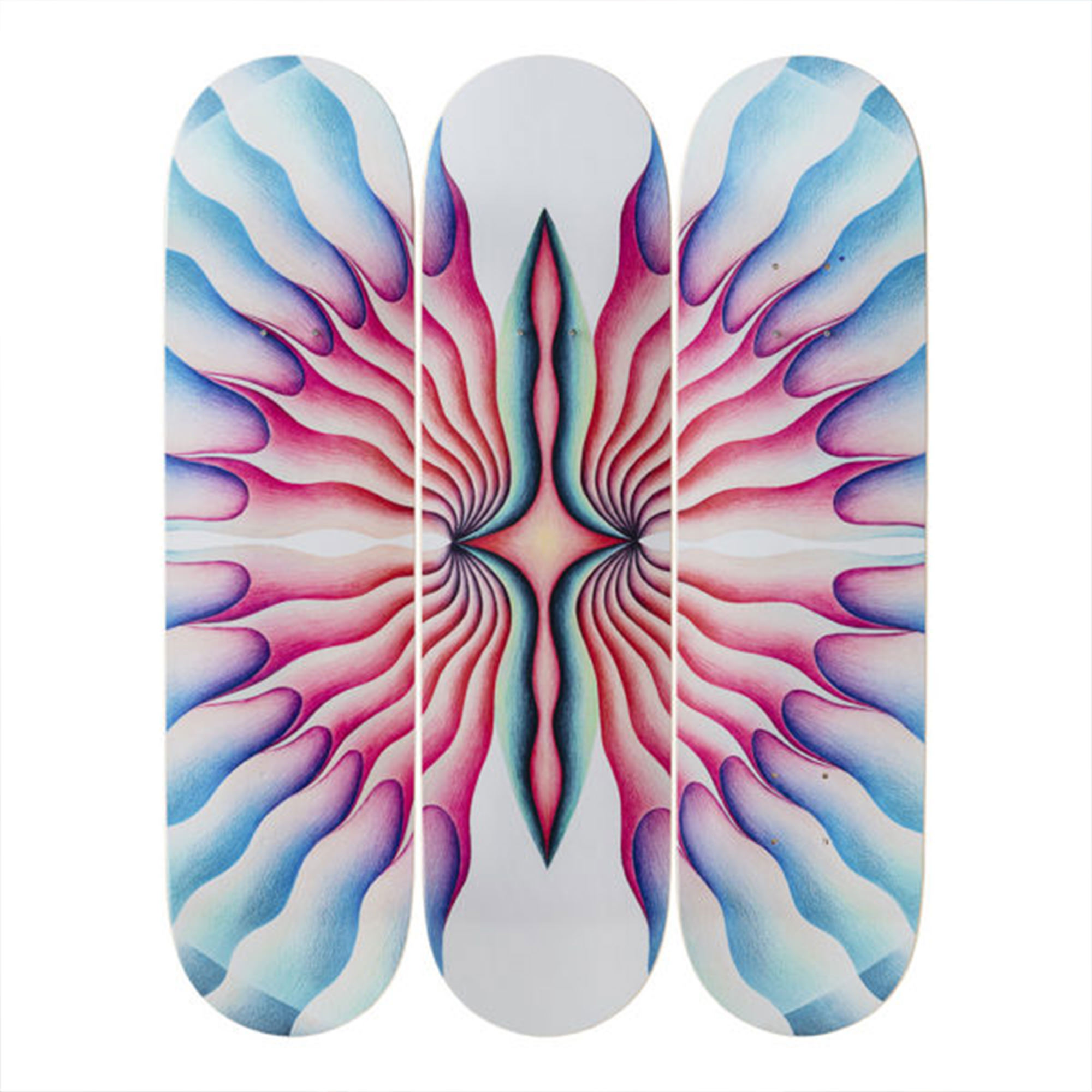