New York City Tore Up a Legendary Skate Spot During Lockdown. These Skaters Are Trying to Bring It Back

New York City Tore Up a Legendary Skate Spot During Lockdown. These Skaters Are Trying to Bring It Back

Last month, Steve Rodriguez checked his phone and saw a photo posted by filmmaker and fellow NYC skater Jeremy Elkin. Rodriguez looked at the photo, looked again, and then zoomed in.

Now seared into the sport's 60-year historic record, the image showed the Brooklyn Banks with half its bricks missing. Possibly the most recognizable skate spot in the world, the Banks resembles a skateable river. It was discovered in the early '80s and canonized in 1985, the year it appeared in both Thrasher and the famed Future Primitive skate video. Skaters migrated there for a decade, until the Banks closed for construction in 2004. Since then there had been issues, but nothing like this.

2. New York City was dissecting this mecca in the midst of a pandemic.

Something seemed wrong, or at least suspicious.

"My initial thought was, 'It's under construction and everything should be put back,' " he said. "But you never know."

Rodriguez, 49, grew up skating around New York, and in 1996 founded the seminal skateboard company 5boro. He's NYC's skate liaison and has worked with the city since the Banks first closed. He's designed a dozen skate parks around New York, including LES, the Nike-backed park that opened in 2012. Absolutely no one knows more about the Banks-legally, historically, or architecturally-than him. Later that night, Rodriguez got a DM from a skater named Jonathan Becker.

Becker, 20, had seen the photo reposted on the skate site Jenkem's feed, and spent the day organizing a petition on Change.org with fellow skater David Carozza, 22. Both grew up outside of New York, watching skate media that included footage of tricks ("footy") shot at the Banks. They eventually made pilgrimages to skate the iconic spot, and in 2018, when Becker started college in downtown Manhattan, his dorm-room window looked out onto the Banks. Becker stayed up most of the night, DM-ing pros, friends, industry people like Rodriguez, and Underground, his hometown skate shop in Nutley, NJ. He woke up late the next morning and checked his phone.

"I'll never forget that," he said.

Thousands had signed it, including some of the world's best skateboarders.

Better yet, it was going more viral every hour, and not just in the community. Fans, artists, musicians, company owners, and anyone who knew what was at stake were signing and reposting. One of them was Virgil Abloh. Like every serious skater, he'd grown up watching Banks footy, and one day made his own pilgrimage. He reposted both the petition and his signature, and later that week did it again.

Others reposted, some adding personal photos-top pros like Josh Kalis and Chewy Cannon, and top image-makers like director William Strobeck and photographer Atiba Jefferson. Support spanned generations: East Coast legend Mike Vallely and Philly's early-2000s flarist Stevie Williams. The enigmatic '90s genius Tom Penny surfaced with a repost. So did handrail pioneer Chad Muska. So did top companies in the $60 billion market, including DC (DC once stood for Droors Clothing, a fav of young Abloh). Euro label Flip signed on. So did some BMX-ers, a few scooters, and eventually Supreme.

Local skaters visited the site, asking workers for a brick. Vans got in touch, asking if the movement needed support. Stacey Peralta called from L.A. A '70s pro, he directed Future Primitive and founded The Bones Brigade, a skate team comparable to the 1980s Chicago Bulls. "The history of New York City skateboarding is carved into those bank walls," said the Sundance-winning filmmaker. "And those walls have been nourishing skaters for generations."

So word was out. The petition got nearly 10,000 signatures in 24 hours, 20,000 in 48, and so on. The morning I filed this story, it had breached 40,000. Becker and Carozza didn't just want signatures, however. They wanted to reach the powers that be, in this case the Department of Transportation (DOT), which was overseeing the project. As per the petition, signers emailed and @'d the DOT.

Many got this response:

"Thank you for taking the time to share your interests and concerns," it read. "This area is needed to facilitate the essential work of maintaining the State of Good Repair of the Bridge into the future."

The note didn't mention the bricks.

"It concluded, somewhat, that bridge repairs were "projected to continue through 2033."

I called the DOT, and was sent to a voicemail listing another number, the one for emergency dispatch. The guy there said this wasn't an emergency but that he knew the number to call, which turned out to be the original DOT number. And so on.

What was going on here? Could this be the end? If so, did the community-which had rallied together in a way independent non-belongers seldom do-really have no say?

The answer turns out to be basic, complex, obvious, mysterious, and at times flat-out contradictory. In other words, a lot like skateboarding, that odd nonsport, the most physical art, the thing more kids are doing today than playing baseball.

It's also unsurprising to Rodriguez, who, when it comes to the Banks, has truly seen it all. He grew up making deliveries on his skateboard around the West Village, where his mom ran a dry cleaner on Downing Street, near Washington Square Park.

This was the early '80s: Skaters were as uncommon as graffiti writers, and about as welcome around town. Back then these tiny squads congregated the way homeless people did-seeking less-trafficked, unpoliced public places where anything could happen. An abandoned gas station between Prince and Spring was a famous spot. Night skating prevailed, especially around construction sites, which were rich with materials like plywood. Rodriguez likens this era's skaters to gangs. "Skateboarders back then were considered the people who weren't safe," he said.

This was also a curious time for skateboarding. It was the end of the sport's pre-ollie era (1960ľ1985-ish), when riders had to plant a foot and leap to get their wide, heavy boards off the ground. Back then the Banks was almost custom-made for a sport that still resembled surfing, and no spot provided a ride like its slight incline, steep embankments, and wonderful brick (second only to marble for smoothness). As the '80s progressed, Rodriguez watched the ranks slowly grow. Then one day he followed the rush of skaters down Sixth Avenue to Bowery, onto Broadway, past Park Row and City Hall, bombing the hill, finally veering right, into Brooklyn Banks.

There, slightly inclined and cased in fine brick, was a block-long basin with a short, steep bank along the left side. Skaters were everywhere: planting, dropping, powersliding, and riding the walls. At the bottom of the park (a.k.a. Big Banks), skaters rolled up the brick transition onto the Bridge's vertical pillars. At the top of the park (a.k.a. Small Banks), skaters rolled up a short brick hill leaping onto and over the embankment wall, into the off-ramp's traffic. There was also trash, crack, crackheads, no restrooms, and a homeless encampment inside of the towering anchorages that made the park look like a cathedral. Hundreds gathered there, and every weekend the city's tiny sects assembled into one vivid army, united by the thing that made them not belong.

This was mostly unintentional: The Bridge itself opened in 1883, and the space sat for nearly a century before an architect named M. Paul Friedberg covered the long bank in brick, eventually adding benches, chess tables, and a sunken basketball court (where Mike Vallely filmed an early video part). Red Brick Park opened in 1979. "It was not with the intention of creating a recreational area," Friedberg said in Deathbowl to Downtown, a good NYC skate documentary. "It's interesting it became that."

Regardless, the city had created an inadvertent haven: a magnet that kept skaters in one place, away from sidewalks, office parks, security guards, and everyone else. And for a decade, everyone was happy. Rodriguez was there "every day," watching ranks grow as the Banks supplanted Washington Square Park as the skateboarding epicenter of NYC, the East Coast, and possibly the whole world. Then, in November 2004, he rolled down Broadway, picking up speed past City Hall, and then saw a fence. With no notice, the city had closed the Banks for construction on the bridge overhead. So began Rodriguez's work as a liaison between the skaters, the city, the planners, the builders, the DOT, the Parks Department, and all the rest. Over the next 15 years the Banks would reopen, close again, rebuild somewhat, and serve as a storage lot. (This is when Carozza and Becker first skated there, crawling in through holes in the fence.)

The city kept Rodriguez in the loop, and eventually asked if he'd design another park, this one under the Manhattan Bridge. LES opened in 2012, and was designed for the kind of skating that flared in the 1990s: ollie-based, with flip/spin tricks onto and off of rails, ledges, platforms, and caped transitions. Visit today and you'll see trash, homeless people, run-over rats, maybe street-tech genius Mark Suciu, or even Weckingball-the sport's new purist, avenging angel, and resident fact-checker.

LES changed things. NYC's skate epicenter shifted to a new place five minutes away, literally made to skate. As a result, interest in skating the Banks waned, though interest in protecting it did not. Becker and Carozza's petition still grows, and while the DOT has not issued a public statement, one employee anonymously told me that the bricks will be replaced. For his part, Rodriguez hasn't wavered.

"After dealing with this so many times, so many ways, my reaction isn't negative-it's positive," he said. "It was hard to see the Brooklyn Banks with no bricks on the flats. But I could see from a DOT perspective, there's less people using the roads because of quarantine, so maybe they're trying to get everything done. Yes, they removed the bricks. To do the work. But I'm positive they'll put 'em back. And it'll be better than ever." 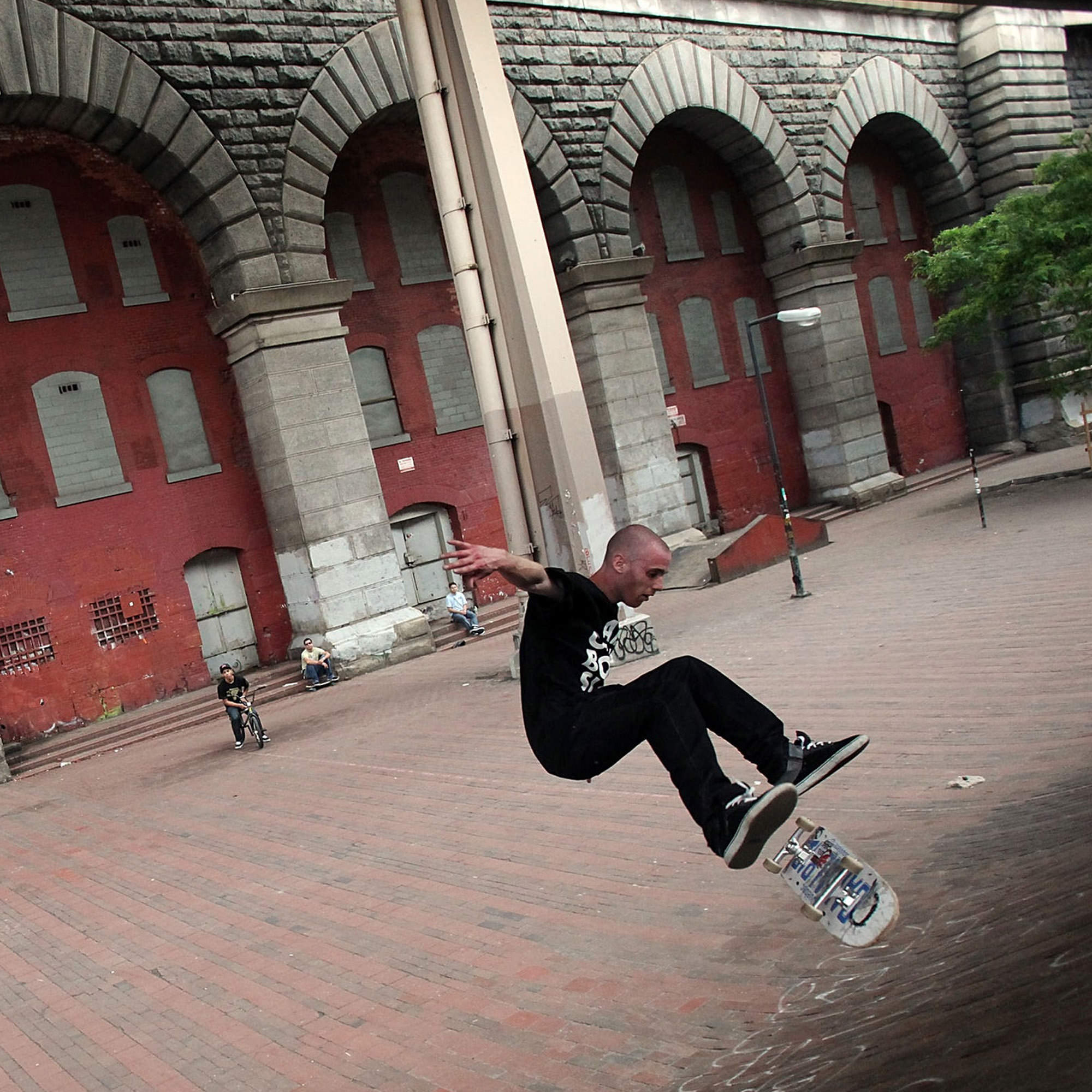