Sam Elstub, Meet the skater-architect who dreams of creating urban areas that break down the barrier between public space and traditional skatepark topographies.

Sam Elstub, Meet the skater-architect who dreams of creating urban areas that break down the barrier between public space and traditional skatepark topographies.

Gliding across a moon-like concrete landscape of shapes, undulations and lines, skateboarders experience our urban spaces and buildings from an entirely different perspective. They see ľ or I should say feel ľ space in a much more tangible way; every nook and cranny presenting a potential for tricks.

Someone who is very much alive to the possibilities of space and surface is lifelong skateboarder and architect, Sam Elstub. His unique understanding of buildings and landscapes as a skater has allowed him to position himself at the cutting-edge of design. In recent times, he has been working in skatepark design itself, creating fresh and innovative spaces where the subculture can both exist and flourish. ôLeaving these spaces open enough that individuals can create their own story is key,ö Elstub divulged.

As if one hyphen wasnĺt enough, Elstub is also a photographer. His analog pictures beautifully capture the minds and souls behind Britainĺs vibrant skate scene. Speaking on his photography, Elstub said: ôSkateboarders value creativity, freedom and risk. One of the best ways Iĺve found to express myself is through documenting these values Iĺve grown up around. I do this through film photography, where I look to convey what it means to be a skateboarder.ö

We caught up with him below, talking discovering new skating spots, regenerating Hackney Bumps and being part of an online community of boarders.

Hi Sam ľ how have you been during this uncertain time?

Hello. Iĺve been doing well thanks. I feel lucky to be in London currently, where I find thereĺs always something to do.

How has it impacted your photography/skating and overall creativity?

In a bit of a backwards way, these aspects of my life have actually benefitted from all the rules and boundaries placed upon us. I think that now, more than ever, I have been forced to adapt, and a result of this is finding new ways to shoot and skate. Often the results are borne out of needing to be more creative with what you have.

Skateboarding over the past year has been pretty varied, from skating alone in lockdown to then being part of an incredible community effort to regenerate an existing skate space in Hackney called the Hackney Bumps. Thatĺs been such a positive thing to come out of the dark times, and itĺs actually because of the first lockdown that it was all made possible. People out of work and having more time on their hands were able to give their time to restore an old state of disrepair skate spot.

For me, itĺs also been cool to not skate the same places and learn to make the most of other little spots across the city, even if thatĺs just a kerb in some dimly lit street. You really don┤t need anything more than just your skateboard, which is the best thing about it all in my opinion. The same is true for taking photos too. I think Iĺve had a more Ĺget it whilst you canĺ attitude with photography and as Iĺve been unable to really plan too far ahead.

Skateboarding is something that is technically solitary but has a huge subculture and community around it ľ how has the absence of this been in lockdown?

It┤s been a good example of how the subculture and community will continue to exist in some form or another, whatever the cards itĺs dealt. Especially in the early lockdown days, people have filmed and taken photos for articles from their living rooms and these then shared online. More than ever, content for skateboarding is found online and less through printed media and I think this platform has enabled people to be more creative with it. So yeah, I donĺt think thereĺs necessarily been an absence of the subculture or community, itĺs just been hiding in the less obvious places. Some people who may have met at a skatepark previous to lockdown, have now been in the streets skating more as parks have been closed.

There have also been a lot of DIY skate spaces being built over the past year, so Iĺve really seen that aspect thrive. The idea is basically taking over a disused spot and building elements there that you can skate, usually out of concrete. Maybe thatĺs been more possible with the absence of the general public out and about, like thereĺs less risk of people complaining or something. These spaces have become kind of grey areas in terms of them staying open as theyĺre halfway between an actual skatepark, which have been closed, and a street spot.

How did you get into photography?

I remember growing up having a friend that had an instant polaroid camera, the ones where you watch the film develop in front of your eyes and take a little print away with you. That was probably my first memory of being interested in it all, and only when I was a bit older, Iĺd go to the local skatepark where I grew up and take photos on a point and shoot camera of my mates.

I didnĺt start actually shooting properly till years later when studied an art course in Bournemouth. I started with shooting digital back then and only in the past few years Iĺve began to shoot mostly just analogue. Iĺd always used photography as a way to present something else rather than just letting the photos tell a story. Like Iĺd take photos and cut them up or rearrange them to make something new which was fun, but I never really saw photography it as its own medium. That changed when I started using analogue cameras and I honestly think itĺs probably because the whole process costs more and I started taking more time to consider what I was documenting. Out of that came more of a love for the individual images.

Youĺre also a landscape architect and skatepark designer ľ this consolidation of physical activity and the spaces that house it, and documenting this is really interesting ľ what draws you to all the areas of your work?

In my previous job interviews for landscape architect jobs, Iĺve always seemed to drop the skateboarding card, you know ôin the eyes of a skateboarder this handrail isnĺt something to aid your mobility down steps, rather itĺs something to get a trick onö. It seemed to be a way for me to show these people that I look at space differently, which I think they enjoyed.

There are many more examples I could give of ways skaters reappropriate objects and space in cities, but I think the main point is that skateboarders are one of the best examples of how architecture is really tested. Buildings or landscapes will only ever be defined through the people that use them, so itĺs pretty interesting to see what skateboarders decide that use to be, regardless if others agree with it.

In recent times, Iĺve started working in skatepark design for a rad company called Betongpark. This kind of work is very different and niche in relation to what I originally studied to design, but it feels good to be learning something new. With both skatepark design and landscape architecture in mind, what I plan to do is combine these skills to create spaces that exist in between the lines of a public space and a the traditional skatepark topographies.

What has been the biggest challenge for you during the pandemic?

I reckon itĺs been keeping variety in my day-to-day life. Itĺs quite easy to feel like I havenĺt got much done sometimes, which is fine I guess, given the circumstances, but it does play on you a bit. That lack of choice extends into longer term plans too like trips abroad or just visiting people you havenĺt seen for a while. Iĺve been buying more zines and small photo publications recently, so that has been a useful way to learn and get inspiration when you canĺt get out as much.

Whatĺs the most unusual place you pull inspiration from?

I donĺt know if itĺs that unusual for me, but Iĺd probably say just watching people skate gets me pretty inspired, especially when Iĺm shooting portraits. I guess itĺs unusual in a sense that Iĺm not looking at something thatĺs going to relate directly into a photo, itĺs just a feeling more than anything. I think if someone can bring a different energy to a session and get other people hyped then itĺs cool to capture that person in that moment. Everyone has their own style on a board, and I love it when someone can be the maximum versions of themselves. That extends further than just skating and Iĺll just get inspired seeing someone at their maximum character, those are the people I want to shoot.

Whatĺs next for you? What are you looking forward to in 2021?

Iĺm trying to get some work printed big and up on walls of galleries and organise some exhibitions, if anyone will open them. I like things to have a physicality and presence like when printed, and to be honest Iĺm bored of Instagram being a sole outlet for my work over the past year. I want that to change in 2021.

Iĺve got an ongoing project documenting the Hackney Bumps DIY skatepark and planning to get that published in a photobook or zine or something along those lines by summertime. Itĺs a community skate project where weĺve been polishing an old concrete skatepark from the 80ĺs to make it smooth again to skate. Off the back of that, weĺve been building new concrete elements and we have a few more builds planned for early this year which will be really sick to finish. Oh, and a skate trip to somewhere warm! 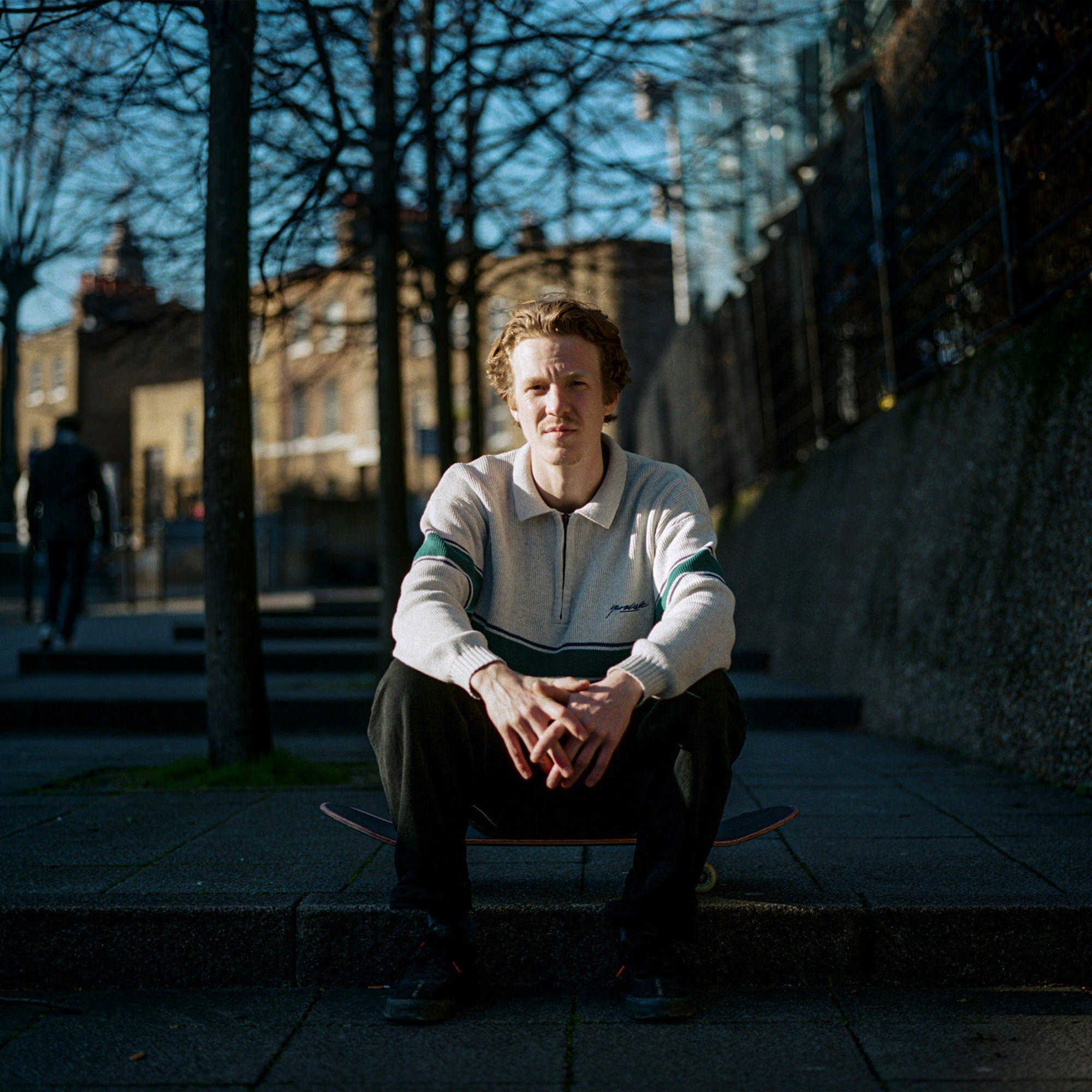