As a child, Raphaelle Macaronĺs school books were filled with scribbles and drawings rather than maths sums and spelling practice. As she grew older she discovered her love of storytelling through images. From obsessing over Daniel Clowesĺ cult-classic Ghost World comic to devouring her motherĺs collection of comic books, Raphaelle quickly developed an instinctive passion for collecting images in her teenage years. Today, her phone hosts a constantly growing collection of ôpointless picturesö which she saves up for moments when she feels ôcompletely uninspired.ö

Born and raised in Beirut, Raphaelle is now working in Paris. ôComing from Lebanon and living as an expat, it has been exceptionally hard to be away from home with all the terrible things that have been unfolding,ö Raphaelle reflects sombrely. She continues, ôdrawing, from illustration to comics, has always given me a tool to express myself,ö it offers a sense of ôpurpose and relief.ö While Raphaelleĺs vibrant collection of poster designs from over the years often communicate nostalgia for her favourite Lebanese snacks, the creative inspiration which provides the most powerful form of comfort, escapism and joy, is music.

ôI think my visual universe was mostly constructed around my passion for music,ö Raphaelle explains. She began collecting records and concert posters from a young age and these early influences suffuse Raphalleĺs practice today. ôI think my use of colour and construction of images with typography came from just staring at record sleeves,ö she adds. So when she was asked to design the visual identity for the festival Nancy Jazz Pulsations in 2021, Raphaelle jumped at the opportunity to honour some of her biggest musical heroes in the form of five posters. Painfully feeling the hole in her life through the lack of live gigs during the lockdowns of the past two years, Raphaelle wanted to inject the buzzing atmosphere of live music into her poster designs. In the series, five portraits of music artists are superimposed with snapshots of famous live performances.

Raphaelleĺs music-inspired practice took on an extra dimension in 2020 when the band Acid Arab invited her to create a live performance during a week-long residency in the north of France. ôThe result is a 1h30 show that merges live drawing with small animated sequences and video footage taken from my car in Beirut,ö Raphaelle explains. The experience she gained through using a video mixer and touring the show through France and Europe was enlightening for Raphaelle, ôit made me discover new ways to combine my creative practice with my love for music.ö

Another project which allowed Raphaelle to experiment beyond the familiar bounds of graphic novels and poster design was Ya Habibi Market, a project led by Patrick Gemayel (ô1/2 of the band Chromeoö). Patrick began the project in response to the devastating explosion in Beirutĺs port in August 2020. Drawing together the work of creatives from the MENA region, the project produced a diverse range of products with all the proceeds going to NGOs helping MENA communities in their home country or abroad. Encouraged by the ôtotal freedomö of the YHM project, Raphaelle decided to design a skateboard, something that she had been longing to do for years. Her design sports a nimble female body-builder prancing in a range of surprisingly elegant poses. Raphaelle decided to donate the proceeds of her design to SkatePal, ôan NGOs who support children Palestinian through skateboarding and outdoor activities.ö

Amongst this exciting roster of projects, over the past three years Raphaelle has been carefully crafting the narrative for her second graphic novel. Now she is raring to start creating the visuals for her story. While she laments the difficulties of finding ôa balance between commissions, personal projects and paying bills,ö Raphaelle remains undeterred. As she gets on with her book, she enjoys the distraction of commissioned illustrations, ôI often learn things when I have to illustrate articles about subjects I donĺt know about.ö 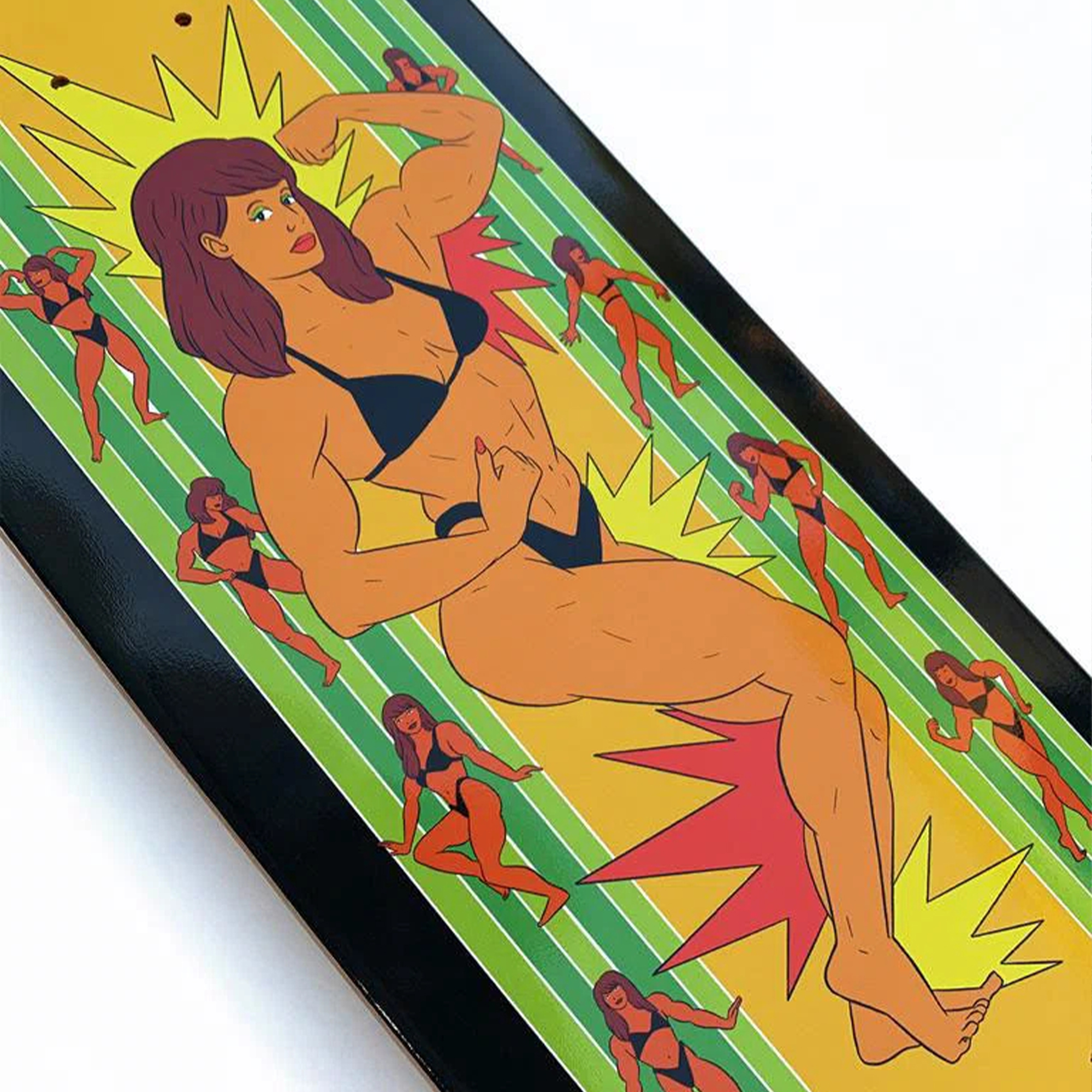 Article Source: It's Nice That