Pro skater Mike Vallely is living in Des Moines and he brought his company, Street Plant, with him

Pro skater Mike Vallely is living in Des Moines and he brought his company, Street Plant, with him

He was touring the country with one of his bands, Good for You, and had a show at the downtown venue Gas Lamp. The next morning, he went alone on a walk through Des Moines, heading from the Pappajohn Sculpture Park to the East Village.

It was a beautiful city, he said, and he loved its energy.

"I travel a lot. I travel all over the world." Vallely said. "But here, it was one of the few times I remember making a mental note and saying to myself, 'If I ever relocated, this is on my list.'"

Flash forward to this year, when Vallely and his wife moved to Des Moines Ś and brought with them their skateboarding company, Street Plant. Vallely now runs Street Plant from his garage, where he packages shipments, and plans to sell his boards at local small businesses.

Vallely, 50, is a worldwide celebrity skateboarder. Since his first sponsorship in 1986, he's appeared in competitions, films and skating magazines, and is a recurring character in Tony Hawk's Pro Skater video game series.

In 2015, he started Street Plant, selling his own skateboards with his family and other industry stars like skater Kristian Svitak .

He had been living and working in Long Beach, California, for years before deciding he wanted to move Ś "somewhere with seasons," he said.

From the bat, Des Moines gave him seasons.

His family was instantly blasted with Iowa's winter, complete with record-breaking snowfall and subzero temperatures. But it only made him like the city more, and he set out shooting a yet unpublished skating video as a "love letter to Des Moines," Vallely said.

"It reminded me of home," he said. "And it has it's own great personality as a city. The bike trails, the waterways, all the state parks, the proximity to urban and natural spaces, the love of the seasons. It's a really, really special place and a nice change from being in California for so long."

Des Moines is an up-and-coming location in the skating scene. Lauridsen Skate Park, the soon-to-be largest skate park in the country, is set to open May 22. It's located at 901 Second Ave., next to the Des Moines River.

Subsect Skateshop, a popular skater outlet in Des Moines' East Village, is also a big draw for the area. The store and its owner, Kevin Jones, are nationally and internationally recognized in the skating community as industry leaders, Vallely said.

The new park and burgeoning skating community in Des Moines are part of the reason why Street Plant will work well in Iowa's capital city, he said.

"People ask me if the skate park was the reason I moved to Des Moines, and I say, 'well, no, but it will be great,'" he said. "It's going to be a huge draw for Des Moines, and for the Midwest. I think the boards we're making will interest a lot of people who are going to be skating here Ś getting back into it or picking it up."

Most modern skateboards are made with a popsicle stick shape Ś a flat, oblong surface with rounded edges, curving up on each end after the wheels. While Street Plant makes some traditional boards, it also experiments with edges and angles that are typically relegated to vintage models.

Vallely believes those retro features should have a place in the modern skateboarding world.

"There's this idea that you won't be able to do tricks if you're not on a modern board," he said. "But look, I grew up in the mid-80s on boards that are not modern skateboards, and I was part of the generation that created all of the modern skateboard tricks. So don't tell me you can't do them on the old boards Ś we invented them on those boards."

With more people getting into skating in Des Moines, different types of boards can appeal to a wider audience. Older skaters, people looking for a personalized style and newcomers wanting a unique experience may all be attracted to the styles of boards Street Plant makes, Vallely said.

"Skateboarding is going to be growing in the city, in the state and in the Midwest because of the skate park," he said. "It's going to bring people back into skating who haven't skated in a long time, and it's going to be opened up to a younger crowd, too."

Street Plant is kicking off its start in Des Moines on Saturday, when its boards will be available for purchase at Subsect Skateshop, 309 E. Walnut St., Des Moines Mercantile, 3707 Sixth Ave, and on its website, www.streetplant.com.

To show its newfound love for the city, Street Plant will be releasing board designs inspired by Des Moines. Vallely is also releasing that video of himself skating around the city.

Vallely said he's already enamored with Des Moines, and is excited to see the skating community grow while he's here.

"We wanted to find a place where we could really put down roots, and really become a part of the community," he said. "We found that here." 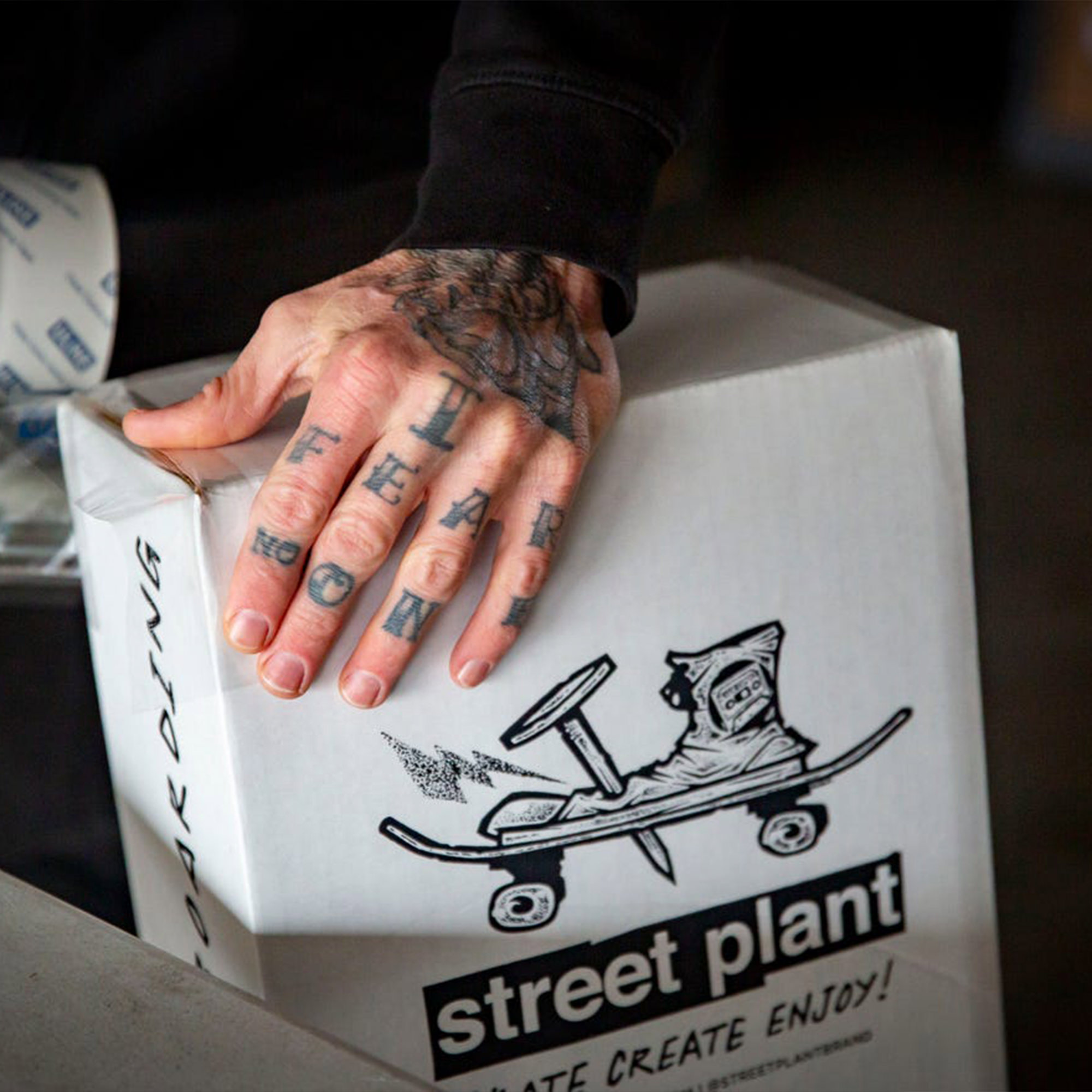