You don't necessarily need to be from Philadelphia to know that it has a rich history as a skateboard town.

Two decades ago, the street skating portion of the X-Games famously took place outside City Hall across from LOVE Park, despite the public being banned from skating there. And on the ESPN broadcast of the annual extreme sports competition, they weren't shy about pointing out the fact that people skating in Dilworth Park and the areas surrounding City Hall was a big deal.

It was so successful, they came back the following year, but once the X-Games left, the city went back to handing out fines and chasing kids on skateboards away.

Despite the city waging war on skateboarders, who at the time had very few alternatives when it came to skateparks, Philly's skate scene thrived. A year before the X-Games came to town, there was the release of Tony Hawk Pro Skater 2 (which was recently re-released on the newest gaming platforms). If you played that game back in 2000, then you're likely well aware of the city's status as a skateboarding Mecca. "Philadelphia" was one of the game's most popular maps and featured a combo of LOVE Park and FDR Park, which was a hidden area of the level.

Over the years, the landscape of the city's skateparks have changed, with new parks being built, renovated or moved entirely as the city itself has undergone major changes, including gentrification. But there's no shortage of skaters or destinations. If you spend more than a few minutes in Center City — or anywhere else around the area — you're bound to see a skateboarder, perhaps making his or her way to the nearest park or just out for a leisurely cruise to the local corner store.

It's widely considered not just one of the best skateboarding cities on the East Coast or in the United States, but in the entire world. That's why Philly is the latest city to be featured on Red Bull's "Greetings From" series, which was produced by local filmmaker Colin Kerrigan, who spent the last five months producing and, as a skateboarder himself, filming the project.

"Red Bull has this series called 'Greetings From' and they've done it around the world in like Rio de Jeneiro, Barcelona, Paris, a bunch of different cities that have skate scenes, and I believe there might be one or two in the U.S.," explains Kerrigan, who had been shooting photos for Red Bull and humbly suggests the main reason he was able to land the project, his first film with Red Bull, was that he could film it without any added travel concerns during COVID-19. "They brought up the idea and we had some discussions, but they allowed me to build the storyline and it really helped since I'm from Philly and I grew up in the city and outside, so I knew the skate scene really well."

The 16-minute mini-documentary on Philly's skate scene was released on Red Bull's site earlier this week and is now available on YouTube. It includes cameos by Red Bull athlete Jake Wooten, who was making his first trip to Philly; Nocturnal Skateshop owner and local legend Kerry Getz, who was featured in the above X-Games video; and other Philly skaters like Kevin Taylor, Jahmir Brown and more.

As you can see from the video, LOVE Park and City Hall are noticeably missing, but they've been replaced by several other city spots, most notably Muni, outside the Municipal Services Building at Broad and Arch, right across the street from LOVE Park.

"Definitely Municipal, or Muni they call it," Kerrigan said when asked about his favorite locations. "And FDR. FDR is like its own little world. If I had to pick two, it would be Muni and FDR Park. They're just their own ecosystems. You could go down across the street from City Hall right now and there's going to be skateboarders there. They have this whole routine during the weekdays that they can only go there after five o'clock or the cops will kick them out. They can try before five and they might get away with it. Next time you're driving in the city, take a loop around [City Hall] and you'll see a ton [of people]. It's like a public skate park, but it's city property.

"The same thing with FDR. Those guys, that's where they hang out and that's their life...when I was a kid, it was 40% of what it is now because they keep adding and building. I wanted to show that [in the doc]. So those two places, FDR and Muni, they deserve their own documentaries in my opinion."

Kerrigan admitted that Red Bull originally wanted the film to be under 10 minutes, but there was no way to accurately depict something as massive as Philly's skate scene in such a short amount of time.

In addition to the documentary, Red Bull also partnered with Nocturnal Skateshop, which was featured heavily in the documentary, and local artist Sam Cardelfe to create a limited-edition skateboard deck featuring Philly skate parks and other local landmarks.

The deck sold out in less than a day, which is very good news (as long as you're not trying to buy one yourself) since Nocturnal will be donating proceeds from the sales to Harding Middle school and its after school skate program.

Perhaps, with programs like that, it shouldn't be a surprise that the city is among the best in the world when it comes to skateboarding.

"I think that comes from the history of it. In the '90s with LOVE Park and the early 2000s, it was legendary. That's the only way to put it," said Kerrigan, who was on hand back in 2001 when the skating world descended on City Hall. "People wanted to come to Philadelphia to visit LOVE Park and City Hall because of what was happening there in the '90s and early 2000s. And in a way, it really put Philly on a map where people consider it one of the 10 best skate cities in the world, which is kind of crazy to say because we live here.

"The kids that come out of Philly, they're like a different breed in the sense that — they kind of said it in the documentary — these kids have to deal with a lot. One of them, Jahmir Brown, is coming from West Philly and he is able to go downtown and skateboard. He just has this grittiness. He's just some kid from the neighborhood and he's really good at skateboarding and is making a life for himself. That story can be told a lot in the Philadelphia skate scene.

"There's just such a community out here. Out in Los Angeles, it's so massive and so big — and that's where the center of the industry is, but in Philly everyone knows each other. It's really cool." 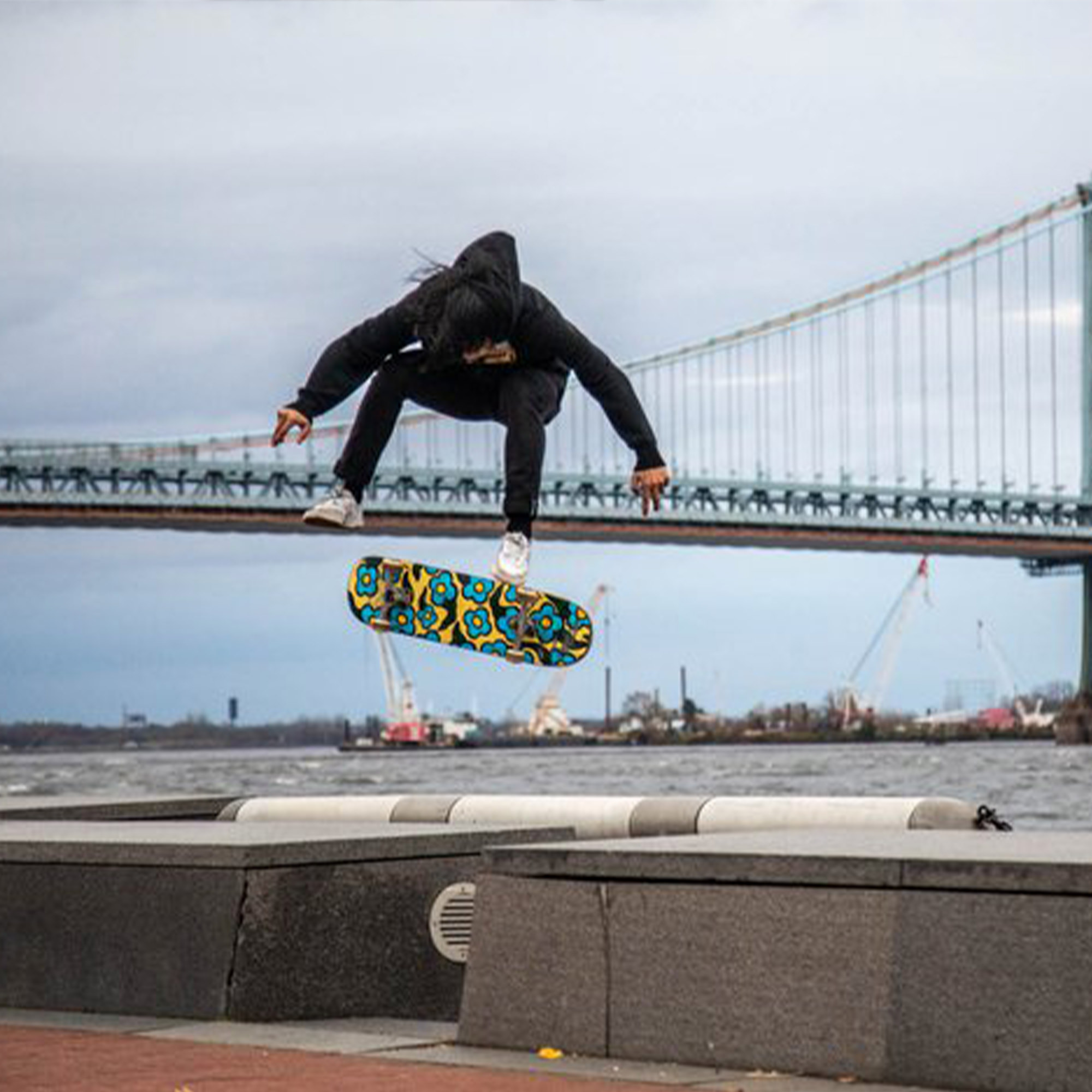