As a skateboarder, I found the lead-up to this summerĺs Olympics exhausting. Ever since the International Olympic Committee announced in 2016 that skateboarding would become an Olympic event, skaters across the United States have rehashed an endless debate: Are we sacrificing part of our creative soul by turning a means of expression into a garishly competitive sport? Or could the Olympics indirectly benefit us by encouraging funding for public skate parks and getting more people on boards? A similar dilemma plagues many subcultures: the pull of money, medals, or primetime broadcasts versus the rebellious values that many adherents consider fundamental.

But the debate permeates the skating world. One of skateboardingĺs godfathers, 63-year-old Tony Alva, recently posted on Instagram about whether the IOC will successfully ôexploit the ethos of skateboarding for skate credibility, cash, and a grab at the youth market.ö For the past five years, the old-guard purists at Thrasher Magazine, the global authority on skateboarding, have repeatedly mocked the idea of Olympic skateboarding. Tony Hawk said the Olympics needed skatersĺ help to improve viewership more than we needed their validation. Personally, I thought the Games were harmless, if boring.

Still, over the past few weeks, I caught myself looking forward to the Olympics. I was intrigued by the chance to see skateboarders adapt to an alien environment of lengthy qualifying rounds, national uniforms, and a cannabis ban. I even decided to attend a watch party in Brooklyn with friends and other local skateboarders. In my 21 years of skateboarding, I have never made plans to see any skateboarding competition, let alone go to a public screening of one.

Unlike those of more traditional sports, skateboarding competitions are not seen as the pinnacle of achievement. Followers of skateboarding instead watch tightly edited, fast-paced montages of professionals landing tricks in the streets: on ledges, stairs, and handrails that are always illegal to skate on, and more exciting than a sterile skate park. The best skateboarders build their career with these videos, and use competitions as excuses to travel and hopefully pad their income. Events such as the 26-year-old X Games, as well as the often-ridiculed Street League Skateboarding series (whose rigorous point system is similar to Olympic-skateboarding scoring), can appear to exist more for peripheral fans and advertisers than for core skateboarders.

Our community is wary of skateboarders who appear too eager to compete. Nyjah Huston, who has one of the greatest track records for skateboard competitions and was a shoo-in for the U.S. Olympic skateboarding team, knows that his wins attract heckles. I used to mock them myself when I worked as an editor at the skateboarding website and magazine Jenkem. To many of us, Huston was a talented proŚand represented the exact opposite of skateboardingĺs ethos.

Skateboarders tend to think of their activity as fundamentally anti-competitive, anti-authority, and anti-mainstream. Yet today, skateboarders arenĺt the outsiders they once were. The skateboarding brand Supreme is now a billion-dollar clothing company; a pro skaterĺs boutique hat might be worn by a flashy celebrity. So we have to work a little harder to not sell out. We overcompensate for the seriousness of the Olympics by hosting ironic competitions in which skateboarders ride in on unicorns and fly over flaming volcanoes.

With this mindset, I arrived at a bar to watch the Olympic menĺs street event and found that a local skateboarder had set up a projector in the back. A curiosity to see our culture represented on a grand stage drew in about 20 of us.

Every so often, as the Olympic skateboarders were warming up, someone in our group would remind us how ôweirdö this was. Would non-skateboarding audiences be bored, confused, or simply unimpressed? (In the following days, all three would prove at least partially the case.) The most authentic reactions were from my friend Colin Read, a former skateboarding-film maker, who every now and then laughed after someone casually executed a precise flip or dangerous grind. This wasnĺt mocking; it was disbelief at how easy the competitors made the feats look.

Then the ôstreetö competition started. Each competitor performed two 45-second runs around the entire skate park, followed by five separate single-trick attempts. When Australiaĺs Shane OĺNeill fell attempting a trick in an otherwise stellar run, we collectively groaned in commiseration. When the U.S.ĺs Jagger Eaton tried a trick he was certain to land, rather than something more difficult that might help him rank higher, we lectured him like armchair coachesŚno matter that weĺd never have the guts to attempt it ourselves. And every time a commentator misidentified a maneuverŚlike calling Peruĺs Angelo Caro Narvaezĺs incredible 540-flip lipslide a less impressive kickflip lipslideŚwe told them off with language thatĺs unfit to publish.

We had become traditional, belligerent sports fans. But we took comfort in knowing, for instance, that Japanĺs Yuto Horigome had debuted his winning trickŚin which he jumps off a flight of 12 stairs, spins to land the nose of his board on a handrail, and then slides down itŚto us skateboarders a few months before sharing it with the world. It was, conceitedly, as if we had preapproved the first Olympic-skateboarding gold medalist.

We also rooted for the event because we still saw moments of skateboarding culture peek through. During the menĺs street heats, the Olympic-stadium speakers blasted hip-hop and ska. Many of the skateboarders had AirPods jutting out of their ears as they competed; some even scrolled through their phone while they waited their turn. My favorite moment came the next day, after the womenĺs street event, when Alexis Sablone, whoĺd placed fourth, nonchalantly flipped the middle finger in a group photo with her U.S. teammates. This was our individualistic spirit enduring. For the past five years, we had wondered whether the Olympics would sanitize skateboarding. Instead, I was pleased to see us leave a smudge on them. 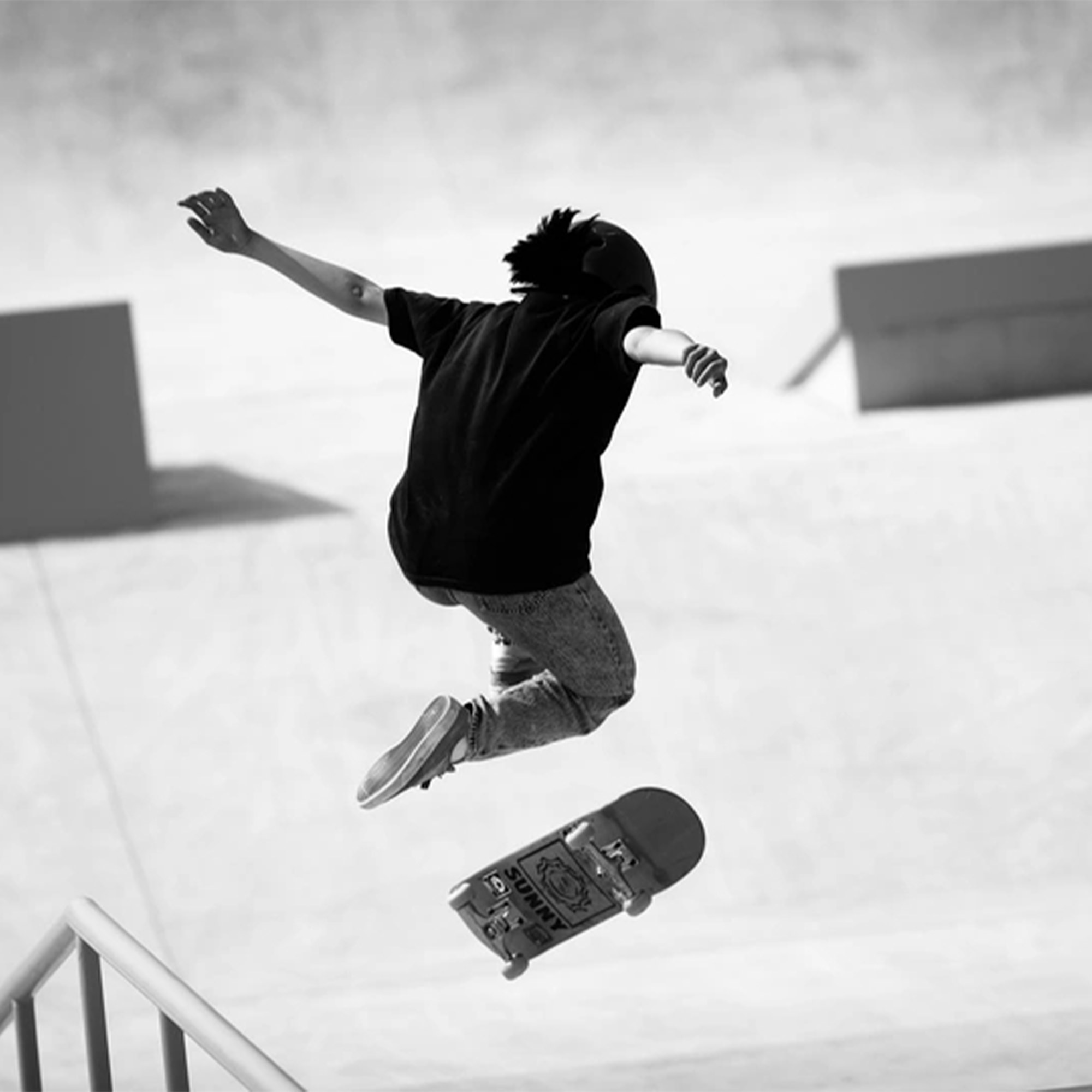