With 55 years of history, Vans has impacted the skateboarding, music and pop culture scenes with its unique waffle soles and endless custom designs. Recently the brand has expanded its aims to also strive to encourage creative expression among local communities and throughout the world.Ý

Founded by brothers Paul and James Van Doren, along with partners Gordon C. Lee and Serge Delia, the community-driven skateboard shoe company has launched many initiatives over the years to stimulate self-expression, art and culture, including Vans Checkerboard Day and Vans Custom Culture.

The Beginning of the Vans Brand

Although Vans is now a brand known worldwide with easily recognizable shoes, its origins ñ including its creative roots ñ trace back to 1960s Orange County. Paul Van Doren grew up on the East Coast and was a shoemaker for Randyís shoe company for 20 years before making the move to California. He was sent to the West Coast by Randyís with his brother James and friend Gordon C. Lee to improve Californiaís struggling manufacturing plant.Ý

After some time, Paul decided to leave Randyís in hopes of finally pursuing his dream of one day owning and manufacturing shoes for a brand of his own.Ý

After 12 months, the Van Dorens and their business partners opened up the first Vans store, originally known as the Van Doren Rubber Company, on March 16, 1966 in a factory building on East Broadway in the city of Anaheim. On opening day, they had a total of 12 customers who bought shoes of any three available styles: a slip-on, a two-eyelet and a lace-up.Ý

Custom shoes came about after the first or second day of opening, when a customer returned saying she wanted a different shade of pink shoe than the store had available. Paul quickly offered to work with whatever fabric she brought to then make the perfect shoe for her, and from that point on the company decided to start charging extra for custom shoes, which would become one of their biggest selling points.

ìIn the ë60s, we had Catholic schools and made shoes out of their plaid uniforms. Plus we were making shoes for all the cheerleaders and drill teams all over Southern California. It was a big business for Vans,î said Steve Van Doren, son of Paul, in an interview with Sneaker Freaker.

Although the company was never intended to be a skateboarding shoe company, brother James Van Doren decided to begin manufacturing skateboarding shoes in the 1970s after noticing his son Markís interest in the sport. Mark, 13 years old at the time, was even the one who designed the first-ever Vans skateboard logo in Costa Mesa.

As the years passed, Vans experienced many highs and some lows, from gaining popularity among famous skateboarders like Tony Alva and Stacy Peralta, to actor Sean Penn wearing a pair of classic slip-ons in the movie ìFast Times at Ridgemont High,î to then attempting to sell unprofitable athletic-style shoes for a variety of different sports. This new venture by then-president James Van Doren would later lead to the company filing for Chapter 11 bankruptcy protection in 1984.Ý

Shortly after filing, Paul returned as president and told employees to focus on the quality of Vansí classic shoes, and in just three years the company was able to reemerge from its debt and bankruptcy claim. From then on, Paul passionately led the Vans company into the mainstream marketplace.

In 1995, Vans lended a hand to promoter Kevin Lyman to sponsor and create the reputable Vans Warped Tour, which, before having its last run in 2019, was the longest-running concert series in America, featuring mostly pop punk and metalcore acts. Steve Van Doren said that this was one of the companyís best moves.Ý

ìBoth boys and girls like music, so we tied ourselves into a punk rock scene because a lot of the guys that were in bands loved Vans,î Van Doren told Sneaker Freaker.Ý

Vans also began to launch and participate in more skateboarding experiences. In 1998, a new 46,000-square-foot indoor and outdoor skate park was constructed at The Outlets at Orange (formerly the Block at Orange), the first of its kind. Currently, the Vans Skate Park in Orange is closed to the public due to COVID, but it once served as a hotspot for local skateboard fanatics looking to improve their skills for free.Ý

The newer Vans Skate Park in Huntington Beach boasts 35,000 square feet of terrain and is occupied by various bowls, rails, stairs and more. However, it too remains closed for the time being.Ý

Christian Hosoi, who travels often with the Vans team, says Steve Van Doren is actively working on getting the Orange County skate parks open to local skateboarders as soon as January, but it is yet to be determined. A Huntington Beach local and longtime pro skateboarder, Hosoi admires Steveís tenacity to continue expanding the foundation his father had built for Vans, through new endeavors such as skate parks. Hosoi loves that the Van Doren family is helping kids stay off the streets and rather is allowing them to embrace creativity and self-expression.

ìThe government should start creating more safe havens for kids through these skate parks,î Hosoi said. ìIf you have a place to go to, you can continue to dream rather than having those dreams die.î

After working with Steve for a few years and observing his fierce commitment to Vansí company and family values, Hosoi finally met father Paul Van Doren, which he says quickly helped him to realize why Steve is the way he is.Ý

Hosoi started skating at the young age of 7 years old alongside his heroes Peralta, Alva and Jay Adams. In 2005, he would officially sign with Vans to be part of an ambassador team next to his childhood icons. Hosoi is proud to be involved in such a family-oriented culture that truly embraces it all, including music, fashion and creativity in addition to action sports.

The company has also sponsored the inaugural Triple Crown of Skateboarding event, and by the 2000s, it had evolved into the worldís leading action sports series, the Vans Triple Crown Series. In 2013, Vans went on to become the title sponsor for the local U.S. Open of Surfing in Huntington Beach, which in recent years has attracted up to 700,000 visitors.Ý

Vans has become a huge part of skate and music culture, which in Southern California and Orange County especially, is quite hard to miss. With two state-of-the-art skate parks and about 24 locations in Orange County alone, it seems that Vans will always have a soft spot for its home in Orange County.

Most recently, the Vans company decided to expand its headquarters, feeling that it had outgrown its old offices in Cypress after spending a decade there. In 2015, plans were unveiled to make the move 13 miles away and back home to Costa Mesa, which was the location of Vansí first-ever retail store over 50 years ago.

Five hundred employees moved into the new Costa Mesa headquarters in 2017, with the new space including an employee gym, meditation space, skate park, communal kitchen, on-site working library and more. With Costa Mesa being the companyís home and a global hub for the action sports industry, the new space allows employees to be at the center of it all. The Vans headquarters is located at 1588 S. Coast Drive in Costa Mesa next to SOCO & The OC Mix.

And More Than Just a Skateboard Brand

In the past few years, Vans has made some moves to show that it is more than just a shoe brand geared toward skateboarding and pop punk culture.Ý

Vans created a new art competition for high school students back in 2010 named Vans Custom Culture, with the intent of inspiring new generations to get creative. Through this art competition, high school students create and submit their own designs for a blank pair of Vans shoes, all for the chance to win money for their schoolís art programs. Vans recognized the lack of funding for the arts in most public schools, and decided all students everywhere are deserving of getting to explore creativity and design with the proper tools and knowledge.

Vans Checkerboard Day, named after its most celebrated checkerboard shoe design, was initiated in 2019 to foster creativity and entrepreneurship. The shoe brand has donated to various organizations since then that accomplish the goal of inspiring the youth to embrace creativity, while also acknowledging the topics of mental health and wellness and community engagement. Through donations and other virtual fundraising events, the Vans Checkerboard Fund has raised over $2 million since its founding.

In its third year, Vans Checkerboard Day (held this year on Nov. 18) focused on building and revitalizing public spaces around the world, and donated a total of $1 million to nonprofits worldwide. This support was made possible by the Vans Checkerboard Fund, established in 2019 to better provide monetary support to nonprofits and community organizations that motivate people to express themselves through arts and culture. Additionally, Vans will be donating an extra $25,000 to DoSomething.org for scholarships.

Despite being 54 years old, Hosoi feels lucky to still be skating with Vans and be constantly supported by an empowering team that gives back to its employees and the community.

ìWe do autograph signings, give out free shoes to underprivileged kids and schools and travel to contests and events all over the world,î Hosoi said.Ý

Most recently, Steve Van Doren, Hosoi and other members of the Vans team also traveled around the states to dozens of stores, personally thanking employees who were working on the front lines selling Vans shoes and clothes throughout the COVID-19 pandemic.

Founder Paul Van Doren published his memoir, ìAuthentic,î earlier this year in April with Vertel Publishing. Unfortunately, Paul passed away in May after his memoirís release.

Following his death, the documentary ìNever Catch Pigeons: And Eleven More Hard Lessons From Mr. Paul Van Dorenî made its world premiere Oct. 21 as the opening film of the 22nd annual Newport Beach Film Festival. Several skateboarding legends attended, including Tony Hawk, Alva, Steve Caballero and Hosoi, and most of the Van Doren clan was there. The premiere was followed by a Vans Street Party in the parking lot of Edwards Big Newport, featuring live bands and skateboarders doing demos and tricks on a huge half-pipe.Ý

The small shoe and lifestyle brand Paul once started in a modest Anaheim factory will continue to live on through the dedicated individuals that make up the Vans family and their ongoing creative and philanthropic efforts.

ìIt takes a team to make the dream work,î Hosoi said. ìTo see the heart and soul of the Van Doren family continue to shine through to keep the Vans legacy going is truly remarkable.î 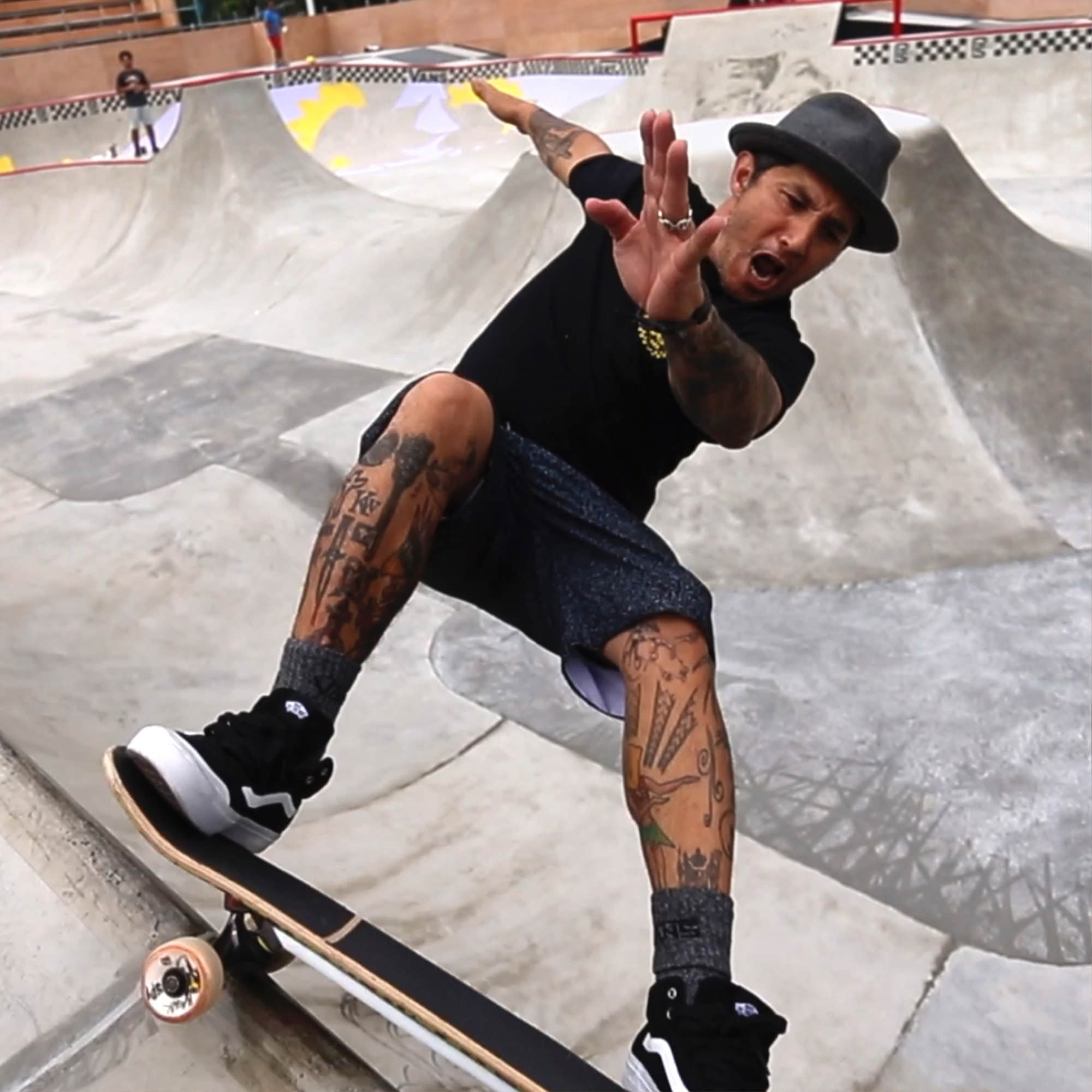