The Apache youth empowering their Arizona community through skateboarding

The Apache youth empowering their Arizona community through skateboarding

Douglas Miles Jr. took up skating in the early 00s because, like many kids of that era, the video game Tony Hawk’s Pro Skater made it look cool. Growing up on the San Carlos Apache Indian Reservation — a stretch of Arizona desert nicknamed “Hell’s Forty Acres” in the 1800s because of its barren and unlivable conditions — he and his cousins used to walk to each other’s houses and cruise around looking for something to do, somewhere to graffiti. For Doug Jr., skateboarding was more than a sport; it became a vessel into a wider world of art, expression and independence.

“With a skateboard, you could just go out and do your thing by yourself,” Doug Jr. says. “[Making skate videos] was really all about creating a world around your friends that you guys could enjoy and share with other people.” Today, he’s one of the first (if not the first) Native American pro skaters sponsored by Tommy Guerrero’s Real Skateboards and prominent companies like Spitfire Wheels and Converse. He’s also a filmmaker and runs his own skate clothing brand, Indellica.

Douglas Miles Sr. — fine artist, muralist, Indigenous activist, and, of course, Doug Jr.’s dad — founded the brand Apache Skateboards around 2001. Inspired by his son’s passion, but unable to afford a new skate deck for him, Doug Sr. bought a blank one and painted it himself with an Apache warrior wielding a spear and shield in his signature graphic style. Once other skaters around the San Carlos rez saw Doug Jr.’s board, everyone wanted their own. In a short documentary, Doug Sr. succinctly explains the strong tie between his work and his community: “By blending Apache art and skateboarding, we’re blending two strong, important tribal cultures.”

Over the past two decades, Apache Skateboards has supplied Native communities across the country with much-needed skate products and safe spaces to explore their identities. “We travelled around the nation to reservations and cities doing demos and holding events for schools — skate events and contests everywhere we went,” Doug Jr. says of his early days with Apache Skateboards. “That really shaped my life as a young skater.” Along with Doug Jr., the brand counts Indigenous skaters like Tasha Hastings, Tray Polk and Navajo Nation’s Di’orr Greenwood as official riders. The short film The Mystery of Now (2019), which was a collaboration between Doug Sr. and filmmaker Audrey Buchanan, offers a glimpse into Apache Skateboards’ resilient team and the vibrant skate scene in San Carlos.

But even with all their success, Apache Skateboards still operates within the broken systems that oppress all federally recognized tribes in the US. Although it’s only two hours east of Arizona’s capital city, Phoenix, the San Carlos reservation has struggled to manage rampant rates of diabetes, cancer, unemployment and substance abuse amongst its tribal members without the proper socio-economic resources. These deadly disparities are the product of a long and ongoing history of genocide and harmful policy — enforced by American leaders that Doug Sr. likes to refer to as “gangsters” — which strip Indigenous peoples of their land, political rights, language and religion.

“When an outsider comes here, it’s definitely a culture shock because it’s not like a regular town,” Doug Jr. says of Whiteriver, located on the White Mountain Apache Reservation in Arizona, where he now resides with his wife and two children. “It’s just not doing economically as well as you would think is normal. It’s the same [as other towns] — we have stores and a grocery store, but you can tell that there are some problems.”

But Doug Jr.’s voice lifts with pride when speaking about the kids that make up the skate scene in Whiteriver, which, to his surprise, is much larger than the one he grew up with in San Carlos. “These kids are energetic, passionate, funny and friendly,” he says. “When you come here, they make you feel at home. Here, I feel good.”

As a pro skater, one of the ways Doug Jr. felt he could give back to the Apache people is by building an entire skatepark for the White Mountain Apache Nation. Despite the sport’s growing popularity there, skaters on the rez rely on makeshift spots like an abandoned housing lot for hangouts and sessions. The Apache Passion Project, which Doug Jr. launched in October 2020, is raising $50,000 for construction. So far, the GoFundMe has already reached more than half of its goal, and he hopes to finish the skatepark by the end of the year.

Aside from providing a safe and fun environment, Doug Jr. believes the Apache Passion Project will provide opportunities to skaters learning the ins and outs of the culture. “[The Apache skaters] are doing these cool skills that are really effective in this day and age, that are important for people to know how to do,” he says. “I think [the rez] is gonna produce some pro skaters for sure, but it’s also gonna produce a filmmaker, a photographer, a social media marketing person…”

The Apache Passion Project, as well as Doug Jr.’s brand Indellica, is meant to show Indigenous youth how to reach their peak performance not only as skaters, but as future leaders. “We’re trying to put those ideas into the clothing, into the skate videos, into the culture,” Doug Jr. explains. “It’s all about the community and survival and strengthening the people around me.”

I was 14 years old when I first started. I think what I love the most about skateboarding is the growth and the journey of progressing. [When] I started I wasn’t the best. But as I progressed, I learned. And as I learned, I began to fall in love with the feeling of learning tricks, rolling down hills, just being around the whole skate atmosphere. It’s become my passion because the sport [made me] who I have become today as a person.

That not everyone will support the cause. But at the end of the day, it’s all about the people who actually skate and who will determine the future of skateboarding in our community.

I started skating when I was about 16. What I love about skateboarding is it took me away from all the negative stuff that’s in the community I grew up in. I love getting on my board and skating with my friends. It changed me to become the person I am today. And [it helped me stay] away from drugs

Skateboarding has taught me how to be supportive to others and how to become a better person.

I started skateboarding at age 14. I just love having fun skating with my homies and trying new things.

Skateboarding has taught me to only have fun and to SEND IT! Also, skateboarding [for me] has been getting attached to others in my community to just go out and have some fun skating.

Why is your passion for skating important?

Skateboarding is my passion because it’s my life. I skate to forget about everything and to forget my problems and worries. Skating has just always been on my mind and it always will be.

I’ve been into skating for about two years, so I was 15 [when I started]. The thing I love most about skating is the satisfaction of landing a trick that you put so much effort into.

If I were to be honest, I have no idea.

Why is your passion important?

My passion towards skating is important ‘cause it helps me be active, keeps me from being locked up in my house and helps me kinda cope with my depression.

I was 13 when I started. The [thing I loved most] was learning all these tricks and just watching people doing it inspired me.

This sport has taught me how to not give up. And that the community and little kids look up to me, I guess.

Why is your passion for skating important?

It helps me relax. [Skateboarding] is my therapy, it takes all my problems away. 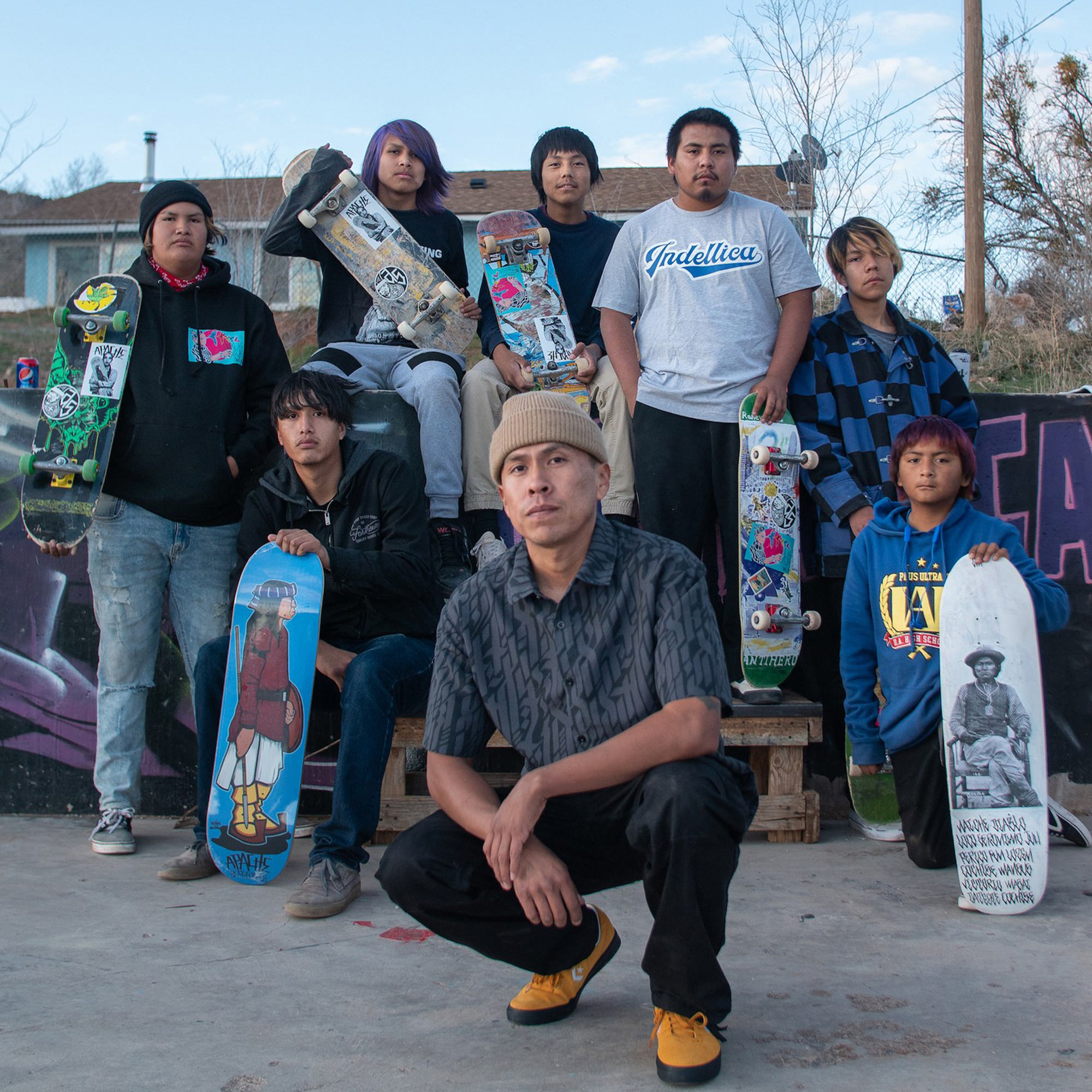