‘I Couldn’t Keep Putting Myself on Hold.’ In Missing Out on the Tokyo Olympics, Skateboarder Leo Baker Found Himself

‘I Couldn’t Keep Putting Myself on Hold.’ In Missing Out on the Tokyo Olympics, Skateboarder Leo Baker Found Himself

“When I was very young, I was like, ‘oh, I’m a boy. I just am,’” Leo Baker recalls of his childhood. For years, Baker tells TIME, he put questions about his gender on hold as he grew a successful career as a skateboarder, going on to win a series of international skateboarding competitions, including the Street League Super Crown in 2016. But the thoughts never went away and, at the age of 19, Baker realized he was trans. “It was two different worlds, and for a decade, my life was splintered as I was trying to figure out what I was doing,” he says of the divide between his private life and public image.

Now 29, Baker is embracing both his gender identity and his passion for skating freely, after resigning from the U.S. Women’s Olympic Skateboarding Team and transitioning publicly last year. Here, he shares his journey.

I got into skating when I was around two or three years old. For a brief period I was in foster care, and my two foster brothers had a mini ramp in their backyard. I’d stand out there and watch them skate. I got a board shortly thereafter and have been skating ever since.

You can’t really judge skating because everybody’s way of doing it is so unique. I think that’s what’s really special about skating, and that’s why I gravitate towards it so much—it’s such an individualistic thing and inspires so much other creativity. But in the world of competition, it gets saturated by the rules and the boxes and the formats.

It all came to a head with the Olympics. People are so excited about the upcoming Games because it’s the first time skateboarding is included. For me, skateboarding competitions are not the be all and end all. There’s people who tailor their skating to win competitions; when I’m skating in competition, I feel like I need to do a certain thing—whereas if I showed up to the skate park, I would be thinking more creatively. I don’t care about winning. Sure, it feels super good to win in the moment, but I don’t need to do it again. I just want to skate.

And on top of that, being categorized as a woman in events was just not for me. I’ve been competing for 17 years, and in that space, there’s always been internal conflict. It got to a point where I couldn’t take it anymore.

In February 2020, I decided to resign from the U.S. women’s Olympic team, and to change my name publicly to Leo. It was a big fear that I was going to lose everything that I’ve worked literally my whole life for. I know a lot of trans people go through that: Will I lose my family? Will I lose my friends? Will I lose my job? Will I lose my life? It’s a scary thing to embark on, though in my circle of family and close friends, everyone has always been supportive. So I decided that whatever happens, I’d just take the loss. The compromise was not worth it. I couldn’t keep putting myself on hold.

For years, I’d hated being in public spaces because then I had to be something else, this version of myself I’d created to survive and have success. All of the room I created by taking that away was invaluable, because now I’m able to just show up every single day and not have to think about, “who do I have to be today? What do I have to be like? Can I be Leo? Are my worlds overlapping?” And then I’d have been having an existential crisis. Since making that decision, I have never been happier in my life. Coming out has changed my life in so many ways. I can’t even put words to the feeling of going to a skate park and just being one person.

When I was younger, I dressed like a little tomboy. I grew boobs, and thought, “God, that sucks.” I started wearing two extra small sports bras. For a good period of time, binders were my saving grace. Up until a friend of a friend sent me theirs back in 2015 because it was too small for them, I would be slouching and uncomfortable; when I first put a binder on, it was the first time I experienced what I guess people call gender euphoria. I was so overjoyed with appearing flat that I cried—I could put on every t-shirt that I’ve ever wanted to wear. I stood up straighter. I was a couple of inches taller. I just felt better and more confident. And I was skating differently.

Last June, I started taking hormones—I’m micro dosing. The changes are very minimal, and I like that. I don’t want a full beard. I like being ambiguous. And last October, I got top surgery. Before I resigned from the team, that wasn’t even something I could consider doing, because of competitions and the anti-doping regulations at the Olympics. I couldn’t be on hormones if I was going to compete in a women’s event, and it was hard to schedule the surgery because my competing meant I wouldn’t be able to have the time to recover.

From the moment I knew it was possible to get top surgery, I knew I was going to get it. But there are so many hoops you have to jump through to get top surgery as a trans person. You need to get a letter from your doctor, you need to get a letter from a therapist, you need to have been in therapy for all this time. For me, that process was really difficult. Every time it was a failed attempt, it just felt further and further and further away. The amount of times I broke down because it just felt like it was never going to happen—trans health care needs to be more accessible.

I can explore life in a new way now that I’ve rid myself of all this sh-t that was holding me back. I almost feel like there is no gender; I don’t identify with any of that. All of it feels so foreign. I’m not a woman, and if you take the “standard” definition of what a man is, I’m definitely not that. I’m floating around in space somewhere between the two. Nonbinary feels comfortable, and it feels correct. He/him and they/them pronouns feel good. We need to create visibility and space for people to be who they are, and to not have to fit into these molds.

What if I had had the representation at a younger age to know that there was a word for that, and there were people who experienced what I experienced—that I wasn’t just a tomboy? Putting my needs first has taken me 29 years, literally. I want there to be that representation for people like me. People who are queer, and just trying to live their lives. I am grateful to be where I am, but if there was someone like me that I could have looked up to as a child, my entire life’s journey might be different. I have noticed that I am that person for a lot of people. I feel the responsibility; I want to stay humble and do as much as I can with the platform I have while I am here.

I started the NYC Skate Project as an exercise in community building, because I just wanted to skate with my peers. It’s an intentional space for queer, trans, and nonbinary folks and cis women. We do lessons with all ages and abilities, to get people comfortable skating. It’s nice when I meet another person who has the same experience, or who is gender queer. The world just is constantly trying to erase us, and we’re not going to be erased.

I used to compete against guys all the time when I was a teenager. Technically I could still. It’s just a matter of whether I want that. But I don’t really feel it’s necessary—and also it’s so boring. Maybe there’s some world in the future that has queer skate competitions, maybe that would be a fun time. For now though, seeing the competition happening from afar and knowing I’m not there and why I’m not there, I can rest easy. I feel like I’ve arrived right back where I was at the beginning when I was a kid, and when skating was this pure and sacred thing to me. I’m going to skate, and no one can say anything to me. It’s how I make my living, and it’s how I feel happy. Nothing is going to touch it again. 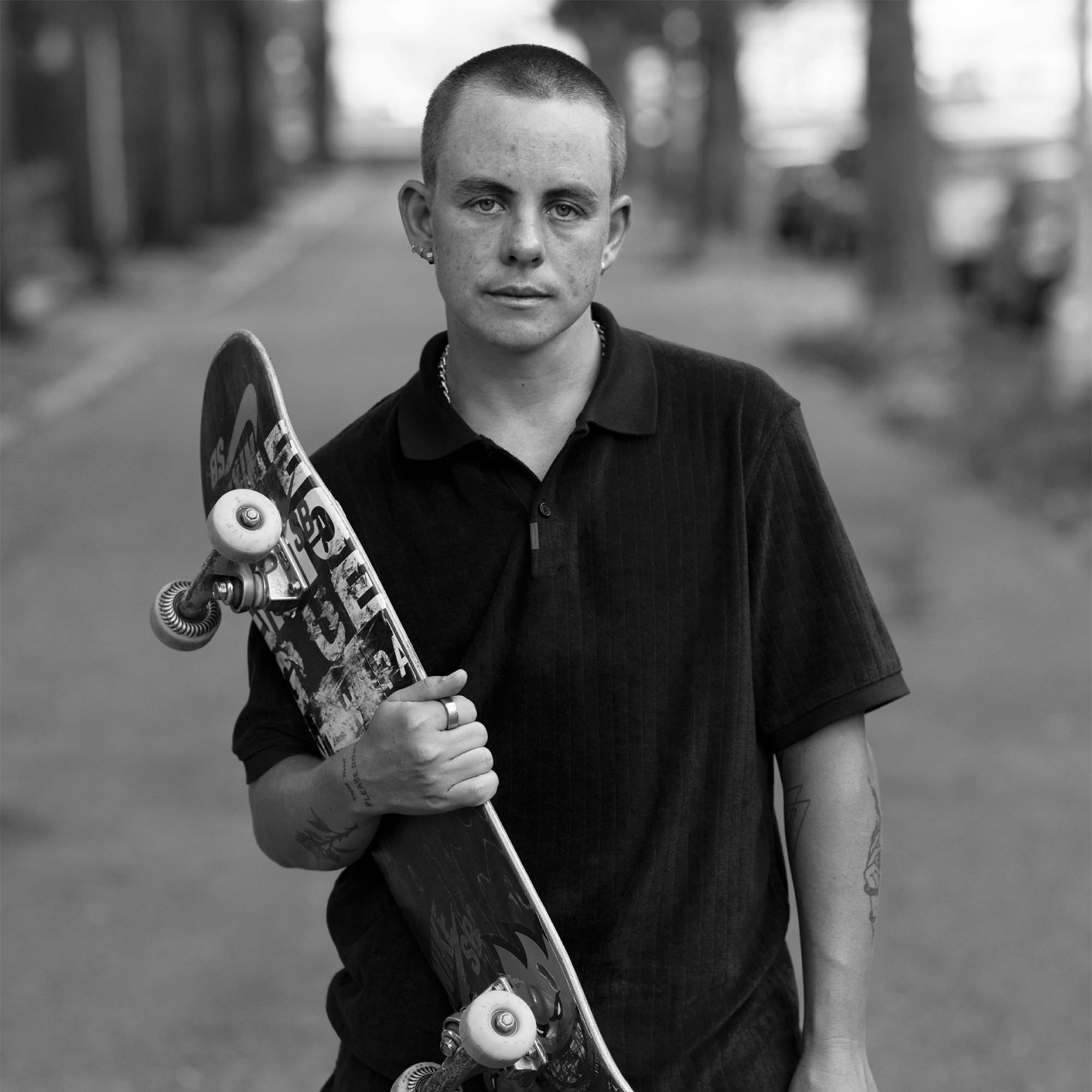