Japan's Skateboarders Roll, Warily, Out of the Shadows

Japan's Skateboarders Roll, Warily, Out of the Shadows

TOKYO - Daisuke Hayakawa is the coach of Japan's Olympic skateboarding team, which is likely to dominate the sport when it makes its debut at this summer's Olympics in Tokyo. But that does not mean he would dare set his skateboard down on a city sidewalk.

He may be a rebel in Japan, but he has manners.

"Skateboarding became one of the sports at the Olympics, but the image of skateboarding in Japan is that it's an activity for unruly kids," he said.

So as evening fell on a warm summer day last year, Hayakawa, 45, carried his board in the crook of his wrist. He left home in central Tokyo and took the subway to Kanegafuchi Station, a half-hour train ride north of downtown, and walked about 15 minutes toward the Sumida River. The streets and sidewalks were mostly empty. Yet his skateboard still never touched the ground.

"One thing that concerns me is after the Olympics, if it becomes too popular, they might restrict skateboarding in the streets even more."

It was not until he had reached a broad and lonely concrete path near the river, under a thrumming highway viaduct near a homeless encampment, that Hayakawa set the board on its wheels.

Skating alone, he practiced a range of ollies and flips, mostly leaping as his board spun beneath him, the kind of tricks his Olympic athletes will do in front of millions next summer. Across the river was a manicured park, acres of green grass etched with a tangle of smooth sidewalks. There were scintillating curbs and sets of concrete stairs lined by steel railings. There were benches where people sat. It would have been a perfect playground for skateboarders. But it was a tease, a mirage. Hayakawa would not dare.

"I can't skate over there," he said with a shrug. "That would bother people."

Japan adheres to strict, unwritten rules of comportment. It is a culture of courtesies and public reserve - a land of order, where people line up to board subways, where they rarely eat or drink in public, where trash and graffiti are virtually absent.

Dignity comes from blending in, not standing out. That explains the swarms of office workers in matching white shirts and the signs on public transportation politely requesting that those with headphones keep the music down, lest a muffled drumbeat disrupt another commuter's quiet. Business cards are exchanged with two hands in a gesture of humility. Simple goodbyes become a dance of bowing and nodding in an exercise of demure grace. Skateboarding is none of that. It is disruptive, noisy, messy. That is the main reason it has, for decades, been relegated to the unkempt shadows of Japanese society - far more hidden and distrusted than in other places around the globe.

"Here, no one uses skateboards for transportation - you can't," said Shimon Iwazawa, 20. He is known to eschew cultural norms and local ordinances by doing it anyway, but usually only in the dark of night. "If you skate in the street, it means you're from a bad place. It's a bad image."

Those perceptions can have consequences. On a Sunday last summer, Iwazawa said, he was carrying his skateboard through Tokyo Station when a security officer stopped him and demanded to see inside his backpack. It happens regularly, he and other skateboarders said.

But this time, Iwazawa's pack had a blade used to cut grip tape, the sticky sandpaper-like sheets skateboarders put on their decks to give their feet a grip on the board. The blade was confiscated as a weapon, Iwazawa said, and he was photographed, fingerprinted and held for several hours.

"In my generation, young people on the fringes either went into motorcycle gangs or into skateboarding. Skateboarding was regarded as something that young criminals do."

Some skaters conceal their boards in bags to avoid judgment in public. They say they are used to being chastised by the elderly, especially, and by security guards. Sometimes they are called "Yankees," an insult to what is perceived as boorish behavior.

"That's the struggle of the skateboarder here," said Nino Moscardi, the team manager for Nike's skateboard business in Japan. He sat at Streamer Coffee, a Shibuya shop with a skateboard theme, under skateboards commissioned as artwork. "People shout, 'You should be doing that in the skateparks!' And that's a complete misunderstanding of skateboarding."

It was like that for a time in the United States, too. Skateboarding once was part of the counterculture, a haven for misfit kids, backed by soundtracks of punk and rap. Skateparks were built, usually out of sight, to keep the chaos off the streets. Over the decades, like so many other anti-authority movements, skateboarding leaked into the mainstream. Skateboards - a mode of transportation, an instrument of art, a totem of defiance - now glide across American sidewalks, plazas and streets. These days, skateboarding style, fashion and culture have morphed into beacons for masses looking for calculated rebelliousness.

That American export echoed around the world, like Levi's and Hollywood movies, to places like Japan. It came secondhand through the mail, in VHS videos and worn skateboard magazines. It came in competitions and demonstrations, where the likes of a teenage Tony Hawk visited and showed how it was done. Decades later, the crowded streets of Tokyo are filled with the young and old wearing Thrasher T-shirts and Vans shoes. There are skate shops and a growing number of skateparks.

"Before the internet, we had to wait for all the videos to come out and the magazines to ship out. That means we couldn't keep up with skateboarding - the tricks and the fashion. With the internet, the time gap has shrunk."

One thing there is not: actual skateboarding on the streets and sidewalks.

"You'd think the bigger that skateboarding gets in Japan, the more accepted and less restrictive it would be," Moscardi said. "But it's actually the opposite."

Signs prohibiting it are everywhere. Part of the reason is practical: Tokyo's streets and sidewalks are crowded. But bicycles are welcome, often seen zigging through pedestrians. The main difference is that bikes are quiet. Skateboards grind and clatter. Skateboarding on the street is considered "meiwaku-koui" - bothersome behavior.

And yet now comes an army of young Japanese, men and women, boys and girls, likely to win more medals than any country this summer in the first Olympic skateboarding competitions. They are brash only in their athletic talent. There will be two distinct events: "street," with a manufactured assortment of rails, stairs and other citylike obstacles on which to perform tricks, and "park," which is mostly a smooth bowl of mounds and banks, harking to the empty swimming pools of California that birthed skateboarding's surf-like style.

Already, Japanese riders like Yuto Horigome, Aori Nishimura and a group of tween girls are stars of the global competition circuit and rising heroes to many in Japan. Now, their anticipated success at the Olympics is thrusting skateboarding into the mainstream. It is giving the sport here an acceptance it never had, and maybe never wanted.

"Skateboarding is much bigger than I expected. When I was a kid, I thought it was just skateboarding. But now it's fashion. Now it's the Olympics."

Skateparks are being built, especially in the suburbs and smaller cities. Parents sign their children up for skateboard classes. They hire coaches. The skatepark has become a cousin of the climbing gym - confined and parent-approved. These cocoons are spawning some of the world's top athletes just in time for the Olympics. Expectations are high. Hayakawa expects Japan to capture at least six of the sport's 12 medals, including multiple golds. It is sure to be a strange but exciting time for Hayakawa and others of an older generation, the grown-up misfits most deeply connected to the culture of skateboarding in Japan.

"For my old friends, we want to show that what we did was not wrong," Hayakawa said. "For the newcomers, who come to skateboarding because of the Olympics, I explain that our culture is cool. We are why they are competing."

After an hour or so under the viaduct, the red sun swallowed by a distant skyline just starting to sparkle, Hayakawa glowed with sweat. He flipped his skateboard back into his hands and retreated all the way to the station. Then he rode the next train home, carrying his own set of wheels under his arm.

"People gradually see skateboarding as a sport," Hayakawa said. "But most people will not understand that the counterculture side is the real skateboarding." 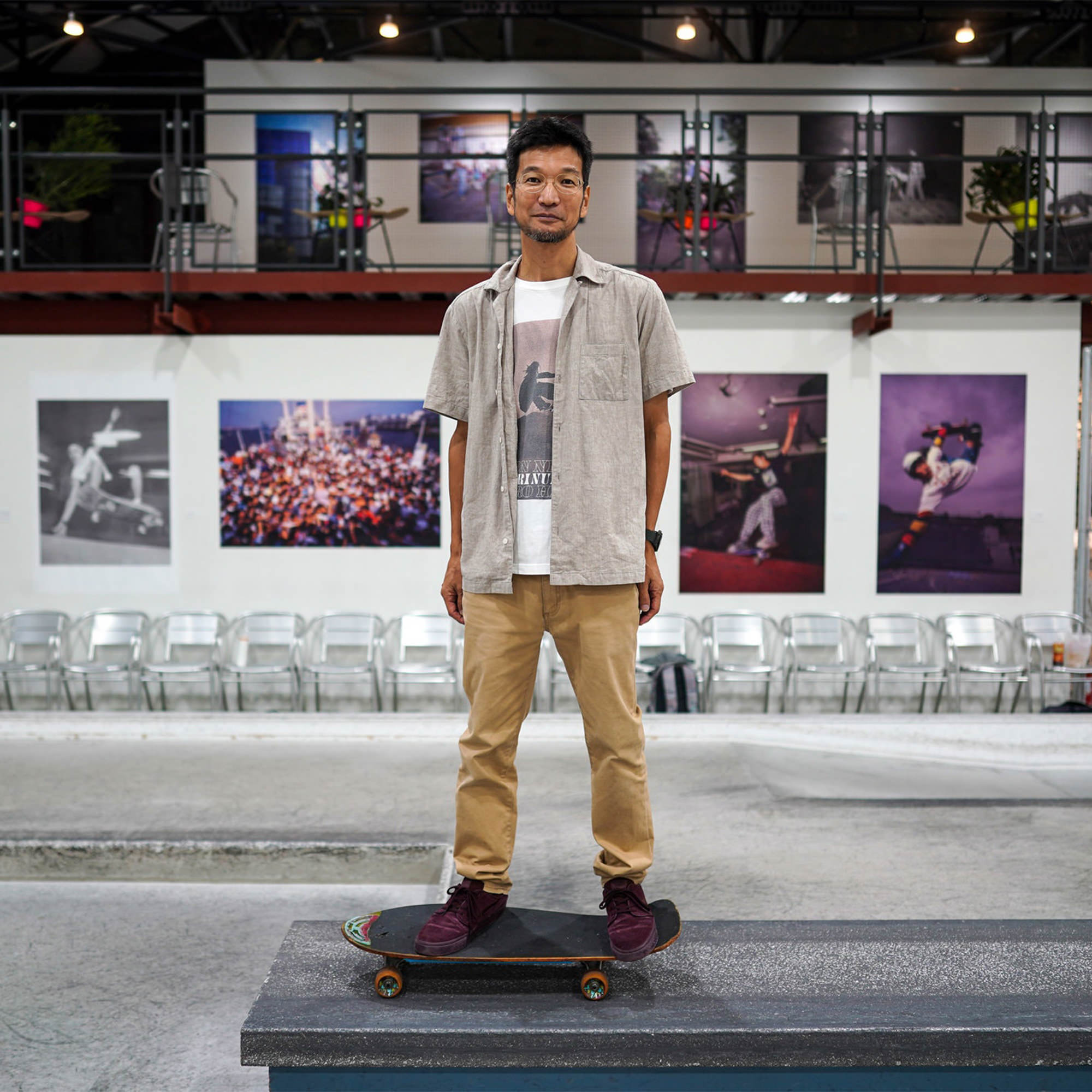