Skateboarding Is Not a Crime & How Not to Get Arrested

Skateboarding Is Not a Crime & How Not to Get Arrested

We have all seen the phrase ôSkateboarding Is Not A Crimeö written on stickers, T-shirts, and skateboards. This article will examine if skateboarding is or is not a crime.

So, is skateboarding a crime? A crime is defined in the dictionary as an illegal act for which someone can be punished by the government; especially: a gross violation of the law. We will use this definition of ôcrimeö in our analysis as to whether or not skateboarding is a crime.

Look through your local, municipal, state/provincial, or federal laws, and you will not (likely) find skateboarding listed as an illegal, or criminal activity, as you would find theft, murder, or drugs, for example. Crimes are listed with their respective definitions, and consequences for committing the crime. Skateboarding itself is not listed as a crime in any law book.

They are sold in huge stores, like Walmart, in local skate shops, malls, and online. People can be seen riding them down the street to school and work, and carrying them in plain sight. Given the legal accessibility of skateboarding to almost anyone, skateboarding does not appear to fit the definition of ôA Crimeö.

An internet search shows that the phrase ôSkateboarding Is Not A Crimeö was applied for as a trademark in 1997 by NHS, INC, the company that makes and distributes many skateboard brands, such as Santa Cruz, Independent Trucks, Ricta Wheels, and Bronson Speed Co. bearings, as well as many other brands. It would be logical to assume that the people at NHS, INC was not the first to say ôSkateboarding Is Not A Crimeö, however, they are the first to put a trademark on the phrase.

While the first person to say ôSkateboarding is not a crimeö cannot be determined, the phrase can be seen and heard all over the place, and is used often in skateboarding culture. It is seen on the internet, magazines, bumper stickers, skateboards, and t-shirts.

Skateboarders will often say it as a way to defend their skateboarding to others who donĺt look favorably on the sport, and itĺs often said to law enforcement, and security guards that are kicking them out of a spot.

Why would skaters get in trouble for skateboarding?

We have determined that skateboarding itself is not illegal, nor a crime, but why are skaters still getting in trouble for skateboarding? Why are we getting chased out of spots, having run-ins with police, and being confronted by pedestrians and property owners?

While simply riding a skateboard is not a crime, there are things that skateboarders do, and places they skate, which are illegal. We will look at some of these in greater detail:

Since the early days of skateboarding, trespassing has been a very common practice. The famous Z-Boys from Venice Beach used to hop over fences of houses, drain, and clean out peopleĺs backyard pools for a place to skate.

In the 1990s there were almost no skateparks anywhere, so people had to skate anywhere where they could, which may have included private property; trespassing seemed unavoidable.

A basic definition of trespassing is simply entering an ownerĺs land or property without permission. Trespassing is illegal. Trespassing may not seem like a big deal to some, but for others, and people that own the property, it can be seen as a big violation of their personal space.

While not always the case, trespassers may also vandalize or damage a persons property. Property owners do not always view skaters in the best light, often because they donĺt understand skating, or what skaters do, or may have had a bad experience with skaters in the past.

Trespassing can lead to fines and punishment of varying degrees, based on the laws of the area, and the severity of the offense.

It is best to avoid trespassing on private property. If you have to hop a fence, you probably arenĺt supposed be there. The only way to get around trespassing would be to ask the property owner for permission to skate on their property. They may say no, but they may also say yes, and let you skate the spot.

If you get permission, make sure you are respectful and do not damage anything. Disrespecting someoneĺs property will guarantee you wear out your welcome.

2. Not Following Bylaws and Restrictions

You should be able to work on flat ground tricks on the street in front of your house, right?! Maybe. It depends on what the bylaws are in your city or town, and every city/town has its own set of bylaws that pertain to skateboarding.

In the city I live in, the bylaw states that skateboarding is forbidden within the downtown or city center area, except in ôExclusive Bike Lanesö. These are lanes that are exclusively for bicycle use. You are only permitted to ride a skateboard on these lanes.

You cannot skateboard on the sidewalks, in the street, or even in ôShared Bike Lanesö, which are lanes that are designated for shared use by bicycles and cars. You are breaking the law by skateboarding anywhere in the downtown area of my city, which is not an ôExclusive Bike Lane.ö

Tricks and stunts are also forbidden anywhere outside of designated skateparks in my city. That means I am not legally allowed to practice my flat ground on the street in front of my house, or do anything except push down the street, or sidewalk, even outside the restricted downtown area.

In contrast, the two towns, outside of the city, do not have such restrictions. You can skateboard and practice tricks, on the sidewalks, streets, and walking paths through the parks, with no restricted areas.

While I have never personally heard of anyone getting ticketed for skateboarding outside of the restricted area in my city (a businessman once got a ticket for longboarding to work in the restricted area), it is best to know what the bylaws are, where you can skate, and what the rules are for the city you are going to be skating in, to avoid drawing attention from law enforcement.

Skateboarders can get in trouble for breaking curfew, as can anyone else. Many cities have curfew bylaws. These are restrictions as to how late at night people are allowed to be outside of a home, and on the streets.

When I was about 12, my town had a curfew of 9:00 PM for anyone under the age of 16. We were sometimes questioned by police on our way home shortly after curfew. The city I currently live in has a curfew from Midnight ľ 6:30 AM for anyone under 16 years of age. Curfew bylaws vary from city to city. Also, know the times that your skatepark is open. It is probably not open 24-7, even if they have lights.

Some skaters like to skate at night. I enjoy going for a cruise at dusk on a warm summers night. Maybe you are skating, and you are having so much fun that you lose track of time, and find yourself out after curfew.

Generally speaking, if you are skating after curfew, and are questioned by the police, being respectful, and explaining that you lost track of time will likely get you nothing more than a scolding, and being told to go home.

Unless you walk everywhere with your head down and looking only at the ground, you have most likely seen a sign that says ôSkateboarding Forbiddenö or ôSkateboarding is Punishable by a Fineö. These signs designate ôNo Skate Zonesö. Just like disobeying any legal sign, disregarding the ôNo Skateboardingö sign and skating in these areas is illegal.

If there is no sign, capped ledges and rails with skate stoppers, are a good indication you are not supposed to skate there. It is a good idea to avoid skating in these areas, so you do not encounter problems with law enforcement or security.

These signs can be found outside of government buildings, universities, malls, schools, and any number of other places. Sadly, many of these No Skate Zones, also have the best looking terrain to skate (which seems cruel). I have noticed that often these signs are posted outside of very busy areas and businesses.

There is no skating permitted outside of my city hall, or on the marble stairs of the auditorium, or outside the mall. These are very busy places in the city, with lots of pedestrians, bicycle, and vehicle traffic. I personally do not like having to deal with high traffic situations when I skate, so I avoid those areas if they are posted or not.

Vandalism is defined as willful damage or destruction to public or private property. Skateboarding can cause damage to objects, and skateboarders can be viewed as vandals by non-skaters. No matter how hard you try and avoid damaging obstacles, if you skate something enough, it will likely become damaged.

When you do a slappy grind on a freshly painted curb, you will wear some of the paint off. If you do it enough, you may eventually break up the concrete. While you may not intentionally be vandalizing the object, others, especially those people that would report you to police, may see it differently.

Skateboarding is not a crime. You are free to buy, own, share and ride a skateboard. There are places that you are permitted to skate, and places that you arenĺt. To avoid getting in trouble with law enforcement, security and property owners, it is important to not skate where forbidden.

Great street spots are wonderful to find but be mindful of trespassing, and bylaws in the towns or cities you are skating in, and what the curfew restrictions might be.

If you happen to get confronted by enforcement, or property owners, donĺt cause a scene; be respectful and leave the property. We all love skating, and we would all hate it if Skateboarding Became A Crime. 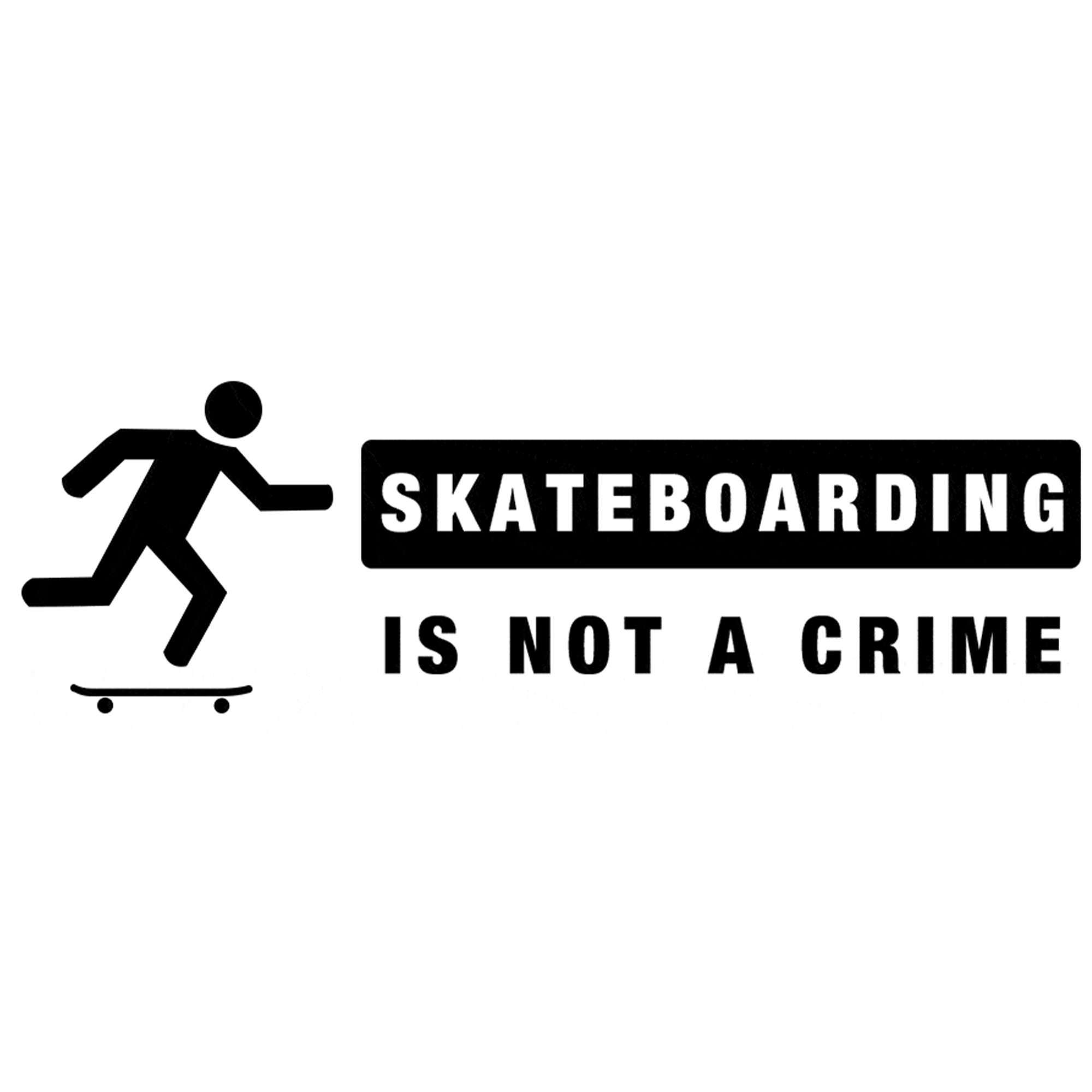