Supreme’s cachet in streetwear is a marriage of exclusivity and specificity. Eschewing the traditional couture and fashion model of being led by a big name designer, Supreme leads with ideas and an innate intuition as to what partners will elevate their brand while maintaining the authenticity that defines their mission statement of cultural cool. Part of that acumen is knowing what categories to own and which to enter strategically through collaborations, and for Supreme, executing that vision in the footwear space has been a key component to its rise as a global leader that dictates an entire industry.

While the release of Jeff Staple’s Nike Dunk SB Low Staple “NYC Pigeon” and its respective riot in 2005 brought the cult of sneaker collecting to mainstream media, it was Supreme’s savvy distribution tactics that supercharged the culture. The brand had collaborated with DC Shoe Co. in 1999 for the DC Supreme Torsion, but its work with the burgeoning Nike SB program in 2002 can be seen as a milestone for both brands, as the partnership reframed both companies as forward-thinking and expanded their influence.

For Nike, it showed the brand’s ability to align with the culture of cool. For James Jebbia and Supreme, working with the most prestigious sportswear brand to ever exist less than a decade into its existence was not only a flex, but a flash of how high they could elevate the brand. More than just their initial iteration of the Nike Dunk Low SB and symbolism of the partnership that altered sneaker culture, their first collaborations introduced the exclusive drop model at scale.

In an era where our smartphones alert us of sneaker drops that live in devoted apps and anything is available for a price in the reseller market, it’s easy to overlook the magic of shoes just “appearing.” We’re talking pre-NikeTalk (the dedicated sneaker forum that popped up in 1999) or any publications devoted to the culture of collecting sneakers. Other than a new Jordan, the pre-heat for a release was nil, so if you didn’t have insider intel, you had to lurk your local and see what hit the racks. In a pre-sneaker media world—we’re not even talking social media—you dug and if you were like me, you decided it was a worthy exchange to wear a referee’s outfit as a Foot Locker employee to have first dibs. Think about that.

So here we are, and while it seems as if six Nike Dunk colorways are released to bots every month, there are also the more sought after and flippable collabs such as the upcoming Supreme x Nike SB Dunk Low that will likely do well in the reseller ecosystem. That’s fine, but what gets lost is how Supreme engineered and perfected the drop. It’s so basic we forget the genius of knowing not only the day something was coming out, but also knowing that you likely won’t be able to get it. It’s both brilliant and mean.

Beginning with its first Nike collaboration in 2002, Supreme’s cachet in both skateboarding and streetwear elevated both brands. “The seeds were planted by the Alphanumeric and Wu-Tang releases a few years earlier, but Supreme lit the fuse and the SB momentum started with them,” says Sneaker Freaker founder Simon “Woody” Wood. “If you look at the numbers, I’m sure there are shoes that are more valuable or sold in higher volumes, but the Cement Dunks did a lot right and they pretty much did it first. They predate digital media as well, which I think adds to their prototypical charm. Sneaker culture was tiny in 2002, but it grew hellishly fast and by 2004 it was a proper global beast.”

The first Supreme x Nike collaboration almost didn’t happen at all. In 2001, the brand was making “Fuck Nike” T-shirts, due to the brand planning on breaking into skateboarding and not having Supreme in their plans for the rollout.

“Nike was trying to get into skateboarding, so they hit up James [Jebbia, Supreme founder] for all this information because he’s got a skate shop in New York, Supreme, and they see what’s going on. They ended up doing their own thing and did not include James,” said former Supreme designer Geoff Heath in a story published on Complex. “He gets all pissed off, calls me up and says, ‘Hey, you know the Nike font? Can you make “Fuck Nike” T-shirts in that Nike font?’ No problem—banged it out real quick. He comes over and tells us the story: They had wined and dined him twice and left him in the dust.”

No disrespect to Nike SB’s collaborations with Alphanumeric, Chocolate Skateboards or Zoo York that were all pioneering, but Supreme’s standing changed the nature of co-branding from using a silhouette as a canvas to opening up the vaults and transforming familiar into famous. How? The two colorways of the Dunk Low featured Air Jordan 3 design cues, and, more importantly, it took the nostalgia of both the Jordan and the Dunk and not only modernized it, but instantly grailed it for a new generation. It also set off the Dunk’s second or third act, depending on who you ask and how many laps they’ve logged around the sun.

In fact, Jebbia wanted to one-up those collaborations and used the Jordan 3’s inspiration to do it. “The minute we set that elephant Dunk off, that was it,” said former Supreme designer Augie Galan in the previously mentioned story. “Supreme made a Nike and everyone wanted a piece of it. By the time we put out those elephant-print Dunks, I think the hype for sneakers was already there. It was just not nearly as hardcore as it is now, but it was there for sure.”

“I’ve never really believed the Dunk’s status was in any way tied to its original life as a basketball model,” says Wood. “To me it’s all down to SB. What SB did better than anyone was turbocharge the creativity and harness pop culture connections. Credit to Sandy Bodecker as he nailed every aspect of the SB relaunch: films, Dutch beer, cartoons, science fiction films… they took that storytelling to a new dimension.”

For their second collaboration in 2003, Supreme took the Silver Box SB era to new heights by not only using the Dunk High for their three-colorway collab but by using premium materials including a luxe crocodile full-grain leather and audacious gold-plated Supreme nameplate lace-lock. The quarter also featured a star repeat pattern that was initially meant to be a repeated pattern of the Nike logo, but was scrapped due to murky legal issues. Samples were produced with the Nike Swoosh logo repeat in both high and low versions, with the low images only recently resurfacing via @lefunkyfantom. Originally sold at $75 retail, the trio currently fetches a median price of roughly $5,500 per pair. What was also innovative was the concept of a skate shop collab being sold in other skate shops, which continues today within Nike and recently with shoes such as the Atlas Dunk High.

“The logo repeat is way more interesting to me than the stars—no contest,” says Wood. “When you think about it, the Swoosh-repeat predates Virgil’s [Abloh] The Ten concept by close to 20 years. Back then, not even Tinker [Hatfield] could chop up a check and get away with it. That recent freedom to experiment with the logo has opened up a lot of design progression—some good, some bad, some ugly as hell.”

So while scarcity and hype engendered the Dunk to the sneaker community, SB and Supreme still needed to connect with the core of skateboarding and that began with the original rider colorways and continued through growing their team by adding top-level talent including Paul Rodriguez who was still entering his prime. Rodriguez wore the Red Supreme Dunk High in his first Nike SB ad, shot by Atiba Jefferson.

“I had the Supreme Dunks, all three of the colorways, baby blue, orange, and red, I had all those in the box,” Rodriguez told Complex. “In my first Nike ad ever, I’m wearing [them]. My friend Nigel, who was living with me, he was a big sneakerhead and he was like, ‘Why are you skating those, what are you doing?’ And at that I was like, ‘What am I supposed to skate? That’s what they sent me, I got to skate.’ I wasn’t a sneakerhead, I was a skate head. Now thinking back, that was one of the regrets I had, I could have had a million-dollar sneaker collection.”

“When I shot that photo I knew everyone’s future was bright.” Jefferson said of the image. “Supreme, Nike, and P-Rod together in one frame looked iconic.”

With a release date this week, a new Supreme x Nike SB Dunk Low collection is set to drop in Hyper Blue, Mean Green, Black, and Barkroot Brown, with the staple gold star detailing, crocodile skin overlays, and Supreme branding on the lace-locks and insoles. But more importantly, will this collab be a boom or bust for the Dunk market as a whole?

In the past it was easy to label trends as cyclical, but the Dunk is ubiquitous and while reseller prices may dip, the safe bet is to play them like the stock market and hold. Unlike past decades, we’re in a unique time where trends don’t cycle industry-wide, they circle within niches that have grown so broad that multiple aesthetics exist at once. With the rapid release of product, references are mined more frequently, pulling from different genres and mashing up ideas without a single prevalent “it shoe,” but, rather, the sneaker of the moment. The Dunk’s popularity may wane, but it’s a silhouette that’s proven itself to be lasting, and when paired with the Supreme brand there’s little doubt every drop will be coveted.

“It’s pretty close to 20 years since its last surge and the comeback was always coming,” says Wood. “Throw in greedy resellers and the hype machine making every Dunk drop seem like an intergalactic event, and it’s no surprise we ended up here. Credit to Nike SB for picking an eccentric range of collaboration partners that have kept the flow fresh and finely tuned. Just remember, you couldn’t give Dunks away five years ago.” 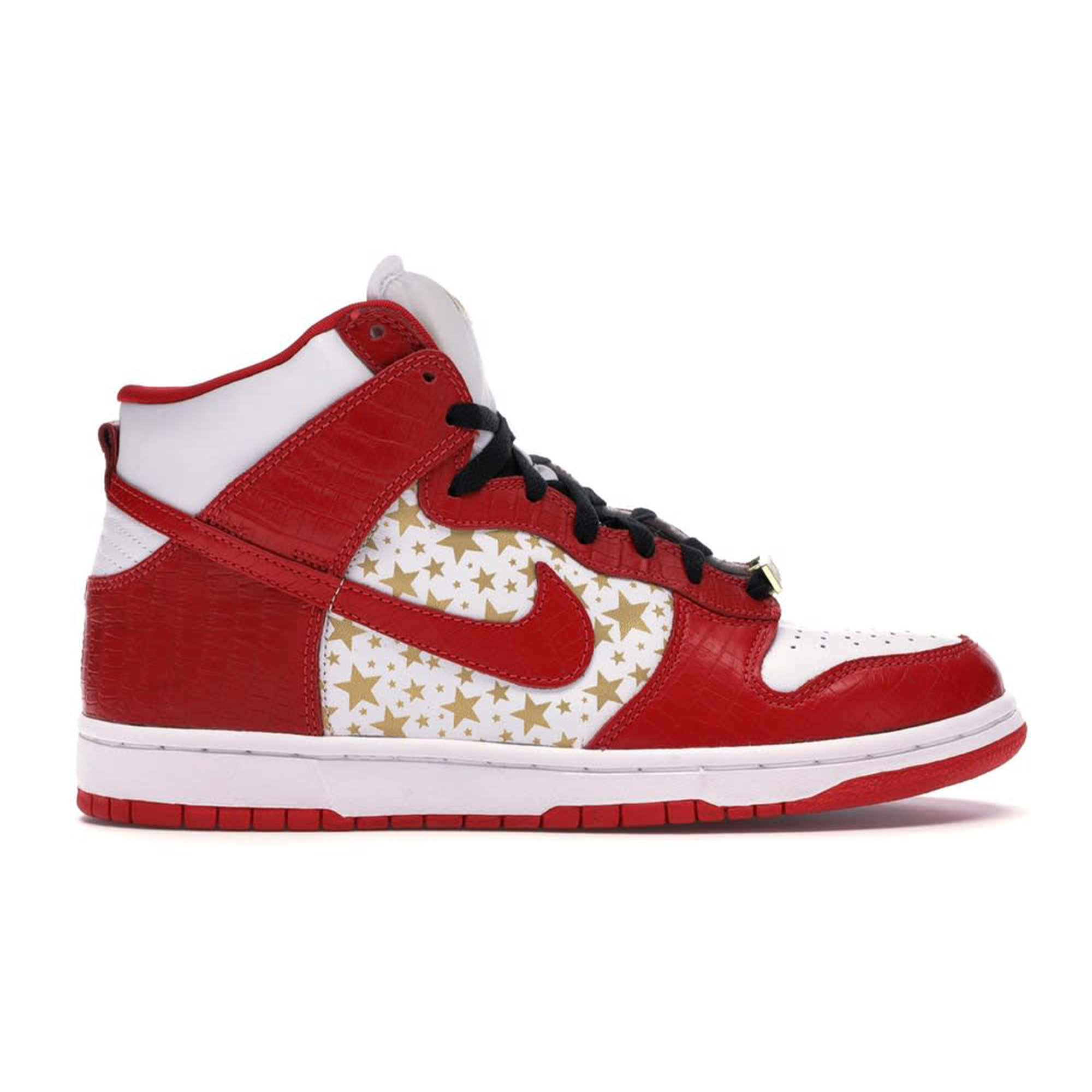