At FroSkate, Women, People Of Color And Queer Skateboarders Shine After Years Of Skate Park Intimidation

At FroSkate, Women, People Of Color And Queer Skateboarders Shine After Years Of Skate Park Intimidation

“My favorite tricks are my ollies, dropping in and going fast, especially going fast,” said the 8-year-old, who hopes to be an Olympic skateboarder one day.

Sedona exudes confidence, despite being the youngest skater Tuesday at Wilson Skate Park, 700 W. Wilson Ave. She easily whizzed past skaters three times her age and shredded in the skate bowl like someone who has skated for years.

Sedona and roughly 50 other members of froSkate cruised, kickflipped and celebrated at the skate collective’s last meetup of the year. There was also a live DJ, skateboarding giveaways and dinner catered by Uncooked.

FroSkate is a skate collective in Chicago that centers women; Black, Indigenous and people of color; and queer people. The crew started in 2019 as a group chat among friends who wanted to skate but didn’t see people who looked like them at parks. They are creating a space for those who traditionally haven’t felt represented in skateboarding.

FroSkate held 14 meetups this year and has had more than 70 in-person and virtual events since it launched.

The group’s mission: Create supportive and inclusive skateboarding experiences for everyone, said Karlie Thornton, president and founder of froSkate.

“You’re able to show up as your best self and be more comfortable to try new things, fall in front of people and mess up when you’re around people who share the same experiences and story as you,” Thornton said.

The collective has meetups at skate parks throughout the city along with community events like skateboard fundraisers, virtual skateboarding workout classes and more. All are free, and anyone can join.

Matthew Cohen, Sedona’s dad, has watched his daughter’s skateboarding journey from the beginning.

Sedona wasn’t always so confident, especially going to skate parks where she was the only kid or surrounded by older men, Cohen said.

Skating with people who are a lot more experienced, or not seeing people who look like you, can be intimidating — and that’s a common experience for skaters who are female, non-binary, queer or people of color.

Jessica Chen, who started skating during the pandemic, had wanted to pick up the sport for years. A year ago, she went alone to Wilson Skate Park, looked around, felt intimidated and joked that she “started skating the other direction back toward the parking lot.”

But at Tuesday’s meetup, Chen was confidently riding the pipe with her board to the cheers of other froSkate members.

Thornton had a similar experience when she started.

“’This is so cool, but these dudes are all pro-level, white and maybe one or two Black dudes,’” she thought at the time, she said. “I was just so intimidated because I didn’t see myself in that space.”

So Thornton created her own community. She made a group chat of friends to skate with. Soon, friends of friends were asking to join, and the group kept getting bigger until the members decided to make an Instagram account.

“We all had afros, so I called it froSkate,” Thornton said.

After that, they had a tweet go viral and realized there was a real need in the community for something like froSkate. Chicago hadn’t had anything like it before, Thornton said.

Gabbi Cawley’s first skateboard was a $10 Walmart board. Skateboarding felt natural to her, and she took every opportunity to skate. But she stopped skating when she and her mom moved to the Chicago suburbs from Los Angeles in middle school.

“I was really, really Brown and everyone around me was white,” she said. “I kind of stopped skating in part because I didn’t want to deal with being brown in such a white space, so this [meetup] is dope.”

At the beginning of the evening, Yaz Wilkerson, a friend of Thornton’s and froSkate supporter who came in from New York for the meetup, led a stretch circle for skaters.

Before rounds of lunges and joyful stress shake-offs, Wilkerson began by setting the intention for the evening.

“At froSkate, our favorite saying is, ‘All love, no hate,’” she said, asking people to repeat after her. “That’s the type of energy we’re trying to put out. We want to make sure we’re connecting with one another, having fun with one another.”

Garren Garcilazo is a regular at Wilson Skate Park and has followed froSkate’s journey over the past two years. He’s amazed to see so many people from different parts of the community come to froSkate events.

“To see where it’s at now, and how fast it’s developed, is crazy. I’m seeing more and more diverse people coming into fro’ every day,” he said.

In addition to skate meetups, froSkate organized events such as No Breaks skate protest for Black lives and partnerships with Skate To The Polls to inform Chicagoans about elections in 2020.

Thornton said everything she does always has to have a community aspect to it; that’s how she was raised.

“I’m also just a Black person who cares about things that are happening to my community, and I have this platform. Why not use it?” she said.

Toward the end of the night, people convened around the bowl to watch skaters try their luck at riding the bowl, a form of skateboarding that involves “dropping in” at the edge of the bowl and letting gravity do the rest.

Garcilazo was one of the skaters who impressed the crowd with multiple tricks, getting shoutouts and clapping from the crowd. But they didn’t just clap when he landed a trick. When he fell, they clapped to encourage him.

Thankfully, Javier Ponce, another Wilson regular and froSkate supporter, had come prepared. He had brought a large box full of Neoprene Wrap packages for skate injuries.

Ponce handing out first-aid supplies for skaters perfectly embodied the spirit of froSkate as a community-made collective.

“It’s been an amazing journey, really,” Thornton said. “The community wanted it. The community made it. And, yeah, here we are.”

Asked what’s next for froSkate, Thornton said it’s still under wraps. Big things are going to happen, she said. 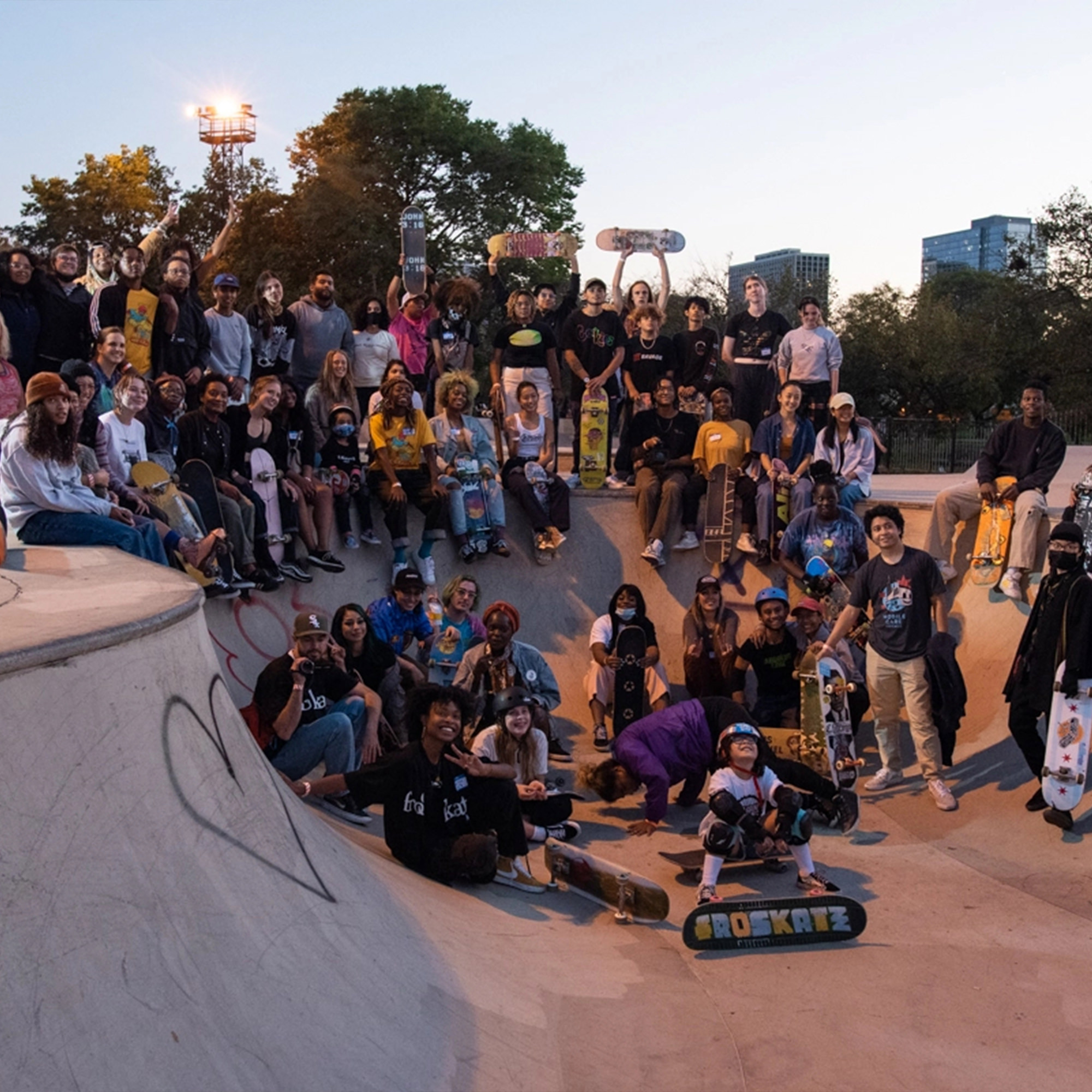