Over the years, Five Favorite Parts has covered its array of local heroes and storied legends, but QS wouldn’t be QS if it didn’t put on for the up-and-coming rippers, like the subject of 2022’s first edition. We’re so confident that this guy is going to be huge that we let him go for six (!!) favorites

At that time, we were so caught up in doing Bones Brigade videos that it was hard to think outside of that bubble. I honestly didn’t watch a lot of other videos. Not because I wasn’t interested, but because I was focused on what we were doing and how to make it better.

And when I saw Streets of Fire, Natas’ part was a game-changer in terms of how he was approaching street skating, and how they used the music. There’s definitely videos that make you want to go skate, but that video makes you want to skate even if you never had skated.

Natas had everything: it had the camera work, it had the editing and it had the skating. Obviously the skating outshined everything else. Also, I think I had a closer kinship with Natas because I was really good friends with Tommy [Guerrero] and whenever Tommy would come to southern California, we would be hanging out with Natas. I never really knew the extent of his skills until I saw that video.

And right to this day, a trick that he did on a whim lives on in infamy: the Natas spin. No one would even have thought of going on a fire hydrant to stall it. He goes and starts spinning. It was unreal. Even the stuff where he’s ollieing from a great distance into an axle stall on a curb — I thought that was so cool.

He was on an island by himself. Let’s put it this way — I think it was maybe 1990, ’91-ish — he and I got invited to do the very first pro skate demo in Johannesburg, South Africa. The dude that brought us over wanted to recreate the Vision Skate Escape. So, he literally built a to-scale ramp of the Vision Skate Escape with the spine, right? I’m the only vert dude flying there from the U.S. with Ray Barbee.

So, what ended up happening was, because he knew Ray Barbee was so spectacular, it didn’t matter if he didn’t have a ramp [for Ray]. Imagine that we’re in this arena, there’s this giant halfpipe, and he’s got some locals that are skating with me. He has a band playing on the deck and everyone stops skating and Ray Barbee skates the flat-bottom. He got as much applause as anyone else.

There’s an arena full of people — there is a halfpipe that probably cost a hundred grand — and Ray Barbee is doing flat tricks and everyone’s just mesmerized with that. That really shows his skill level and how special his style was — is. He’s still out there.

I knew that I wanted a Ray Barbee part to be part of this thing. And I watched some of the other ones and everything leading up to Ban This was where he was in a group, and everyone’s vibing on each other. This one was time for him to have the spotlight.

We all already knew Gonz was the godfather of street skating at this point. He was creating so many trends, tricks and techniques. And when it came to the Blind video, that felt like a culmination of all his efforts. When you see him cruising off and on the sidewalk, into the street, through traffic, coming back up and doing tricks the whole way — no one had anything like that. And then he was doing the biggest rails and the biggest stairs.

But what really struck me and still to this day — I just watched it again — when he boardslides that crazy zigzag rail. All of us were shook when we saw it. And then he, just to add flair, does a shove it out. That said it all. No one would even think about skating that rail, and he’s not thinking about that. He’s thinking, “I’ll probably do something cool when I get off of it.”

And then that double kink handrail, we put that in our video game. It was so far beyond anything at the time, and so dangerous. That’s the thing, we forget that Gonz took some heavy slams.

I just saw a video that Brian Anderson shot of him at the L.E.S. Skatepark, and it’s still Gonz through and through. Every once in a while, he’ll text me out of the blue and be like, “Hey, you and I should try this trick.” And I’m thinking: Aren’t we both over 50? Are you really texting me about tricks we should be trying? Okay, I’m in if you’re in. Let’s go.

You can’t overstate how heavy that whole part was. And the whole big ramp movement — Andy Macdonald was the first one to ever jump a giant gap and he kept moving the gap further apart so he could do his thing. And then Mat Hoffman built a 20-foot quarter pipe and got towed in by a motorcycle to see how high he could go. Danny brought those elements together.

I truly don’t believe that anyone else could have both of those skillsets and been able to explore what else is possible. I think us veteran vert skaters would’ve saw a big gap and a big quarter pipe and thought, “Man, I hope I make that.” Danny is like: making it is not even the issue. We’re making this, but I’m going to show you what’s possible at these heights and these distances. So, he’s spinning 720s, he’s doing a varial frontside 540.

Then you put a rail? And in his mad genius he makes it curved? No one would’ve thought to do that. Everyone would’ve thought okay, straight rail, right? I went there. I did a boardslide on the rail. That was it. I was ready to celebrate. For him, a boardslide on the rail is his way of testing the trajectory. And he’s going to front board, switch crook. It was unreal.

There are certain people that have done tricks on vert — him, Bob Burnquist, Mike Frazier — that are so complicated and technical that I feel like no one will ever do them again. And maybe they only did it once. But that’s going to be it. No matter how far skateboarding gets, you are not going to be able to do that one trick that Danny, Bob or Mike Frazier did.

It was really exciting for me to have Lizzie focus on a video so intensely. I think in the past, her video parts were more if you caught her on this trip, then she’s going to get some clips. And yes, she had a couple videos that were only her, but I feel like she wasn’t fully committed to those as a part.

So, when we set out to do Saturdays, I really wanted Lizzie to be one of the main parts and was putting all of my resources into it. She put her time in. I was stoked that people saw her diversity of skills.

To use a Amanda Palmer song was a big deal, especially for Lizzie. And while we were in New York, we managed to get Amanda to show up and do a surprise intro.

I think this is a testament to Lizzie’s commitment and perseverance. There was the channel that she ollied [at Marginal Way] in Seattle. It was me, Jaws, Ben Raybourn and Lizzie. She started trying that gap, and we were there for probably an hour-and-a-half of her trying that. Ben, Jaws and I were all starving, and we walked down the street and went to a sit-down restaurant because we hadn’t eaten all day. We ate, came back with food — she’s still going. She stops and eats, then goes back into it for another hour-and-a-half and finally makes it. I’m talking about somewhere between four to five hours of straight attempts. And she made it: to me that showed this grit that you can’t teach.

Obviously, I have a special place in my heart for ramp and transition skating. It’s very rare that anyone comes out with a part that is evolutionary, and Tom did that. I don’t think you need to be a vert or park skater to appreciate how gnarly his stuff is.

He’s among the best transition skaters, but he can do anything. That pool that he does a 540 in? I did a small ollie in that pool and I was hyped. And then front blunt on the tombstone, the switch rock and roll — it’s endless. But that’s the first half of it, and then when he starts getting into the big ramp stuff is when he unleashes.

There’s these tricks that he does where every single one would’ve been an NBD vert trick. And then big spin tailslide. No one’s ever done that. And shove it out of it. Alley-oop frontside blunt slide? I’ve seen people do that on mini ramps or in street; I’ve never seen anyone do it on a vert ramp. And he didn’t do it on a vert ramp. He did it on a 18-foot quarter pipe. It’s so unreal.

Those are the things that when you see them — and you don’t skate ramps — you probably think they’re pretty amazing and they probably stick with you. When you see them at this perspective of a ramp skater, it seems not possible.

I know Tom’s been working on the video for years, and he was one place away from making the Olympics and all this stuff was leading up to this big apex of his career. I think that’s probably how he felt because we all knew that if he was in the park event in the Olympics, there’s a good chance he’s going to win gold medal. It was really disappointing he didn’t make it, and I don’t think that’s the end-all to skateboarding obviously — but then to see this part, that was his opus. As far as I’m concerned, that’s his gold medal. 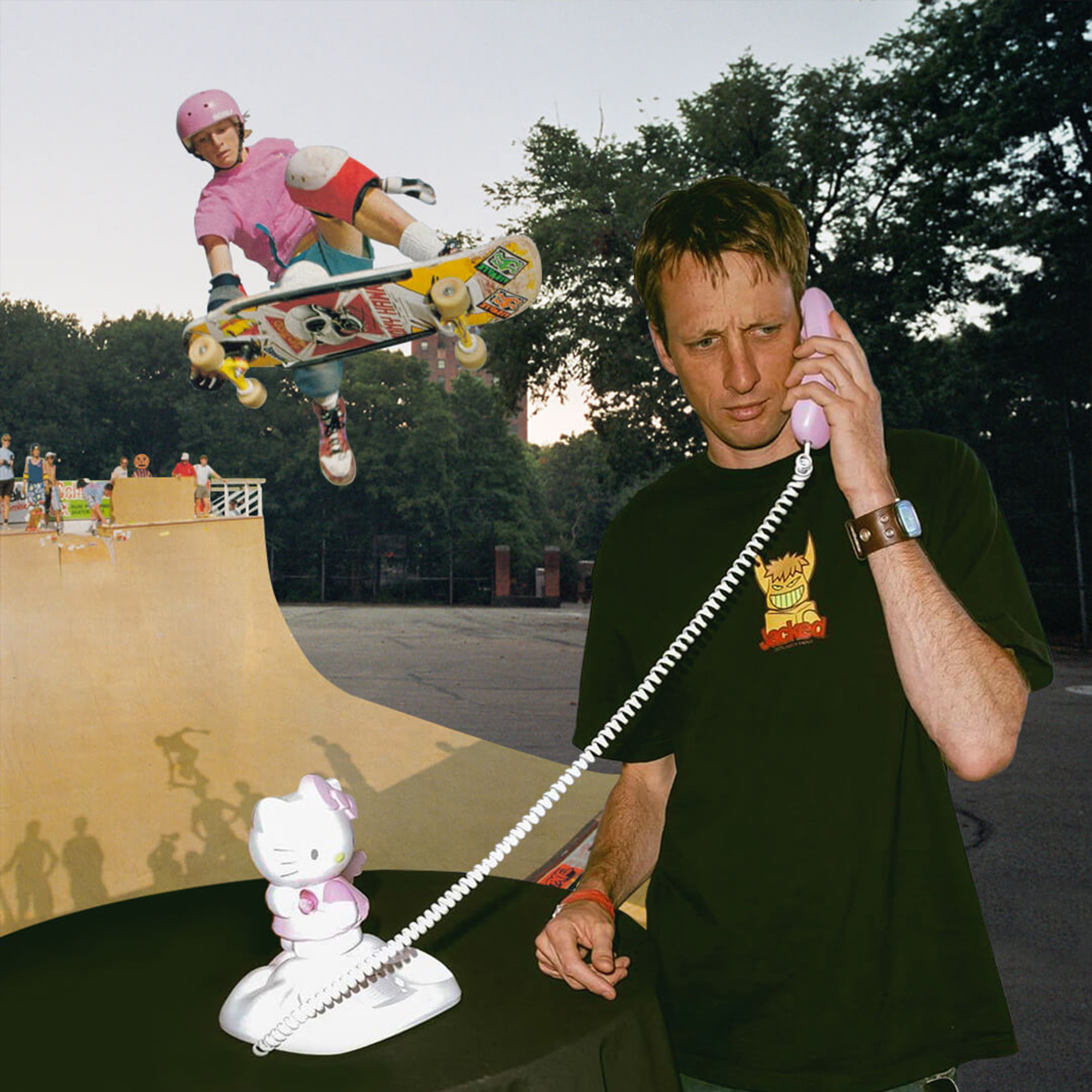