Evolution of video cameras in skateboarding

Evolution of video cameras in skateboarding

For many of us, skateboarding was introduced to us through a visual medium, whether popping in a VHS skate video, stumbling upon the X-Games on TV or playing Tony Hawk’s Pro Skater. The act of skateboarding as a visual and performance art needs to be seen to be understood. If it is not how we fall in love with skateboarding, it is certainly how we nurture our love for it.

Unique to the industry, skateboarding for most of its existence has been intimately documented by fellow skaters within the community. Since the ‘70s, skateboarders who might have lacked the gnarly factor to pursue a skate career or brand owners and former pros like Stacey Peralta heading up their own companies, found creative fulfillment and contribution by picking up a camera and filming their friends. What began as a simple way of capturing the stoke or creating a promotional video for their brand, has since evolved into a full fledged career opportunity and creative outlet embedded in the skateboarder experience.

Those first skateboarders who passed around the camera like a marathon baton never imagined how the industry and the way skateboarders digest skate media would have evolved to where it is today. From what began from shoulder bearing cameras, to Hi8’s and mini DVs, has since evolved into incredible High Definition 6k cameras, with social media clips uploaded by the minute and bite size snackable skate content eclipsing full length videos that used to dominate the skate media landscape. Beyond filming, skate editors who used to struggle editing by a frankenstein cauldron of VHS players and blank tapes, now battle with memory storage and soaring camera and editing equipment costs. Nonetheless, while skate filmer methods and the media outlets they operate have evolved, the evolution of skate media has always been preceded by the evolution of skate video cameras.

And now, from what began from manually loaded film cameras, to shoulder held cameras and VHS tapes, has evolved into skate videos on YouTube, Instagram and Red Bull TV. While the landing spots for content and skateboarding video cameras have evolved, the videographers themselves have never wavered in their dedication. For decades, videographers in skateboarding have peered through the viewfinder to bring skateboarding to its people. It’s time to return the favor and highlight those cameras integral to the history of skateboarding.

Prior to the ‘80s, skateboarding was predominantly filmed on Super 8 and 16mm cameras. These handheld cameras more often than not were devoid of a microphone and even if capable of sound, often required an external microphone via a 6-8ft cord. As a videographer, you have to be willing to be “hands on,” but no cameras are more hands on than Super 8 and 16mm cameras; especially the 16mm which requires a videographer to manually load, meter and develop film. With these processes comes room for failure and skateboarding may never know how much footage was lost because of this. When we think back to DogTown, early Natas footage and the early contest footage of the 1970s, we’re watching Super 8 and 16mm. Even so, these cameras have stuck around and actually can be seen in most skate videos in little clips and aesthetic punches.

The natural film grain of the 16mm and Super 8 camera have ensured this early predecessor has stuck around in skateboarding. That being said, with cameras often being unreliable and film cartridge and processing costs being something akin to $70 for two minutes of footage, the Super 8 and 16mm are mainly used for filming intro slates or an artistic 5-10 second clip. You can see a ton of fantastic super 8 and 16mm cutaways in skate videos by guys like Jon Miner, Aaron Meza, and Ty Evans. Many of today’s top videographers credit Super 8 and 16mm cameras as the horses they rode to understanding exposure, composition, and the dedication and attention to detail it takes to become a successful videographer in skateboarding. Nonetheless, the early ‘80s brought VHS and Hi8 camcorders into the fold; eclipsing the Super 8 and 16mm forever.

Some might not even know what a Hi8 tape is but hopefully we all know a VHS tape. Either way, it’s important we remember how skateboarders would lug around boombox like shoulder cameras to film skating just to dedicate insurmountable hours to editing videos by way of frankenstein VHS hubs. All of skateboarding truly owes these pioneers a great deal for paving the way with their dedication. By setting a high standard, VHS and Hi8 camcorders propelled skate videographers to launch the evolution of skate video cameras into a new era. An era defined by mobility, rawness, street operating, and a true to culture capturing of skating at a time when its popularity was adrift. With increased mobility, popular culture’s blind eye to skating, street skateboarding exploded all of the US and into the World; with more and more skate crews, companies and brands gearing up and documenting the streets. Paired with novel ways to edit tapes, it was the VHS and Hi8 era that began the illustrious style and aesthetic skate videos are known for.

As an upgrade from cameras like the Super 8 or 16mm which captured the early DogTown footage on costly film, the VHS and Hi8 camcorder’s greatest contribution to skateboarding was arguably the fact skaters could now edit videos to music. This birthed a new creative avenue in skating, both on a corporate and amteur artistic level. Skaters started to imagine their skating to songs and a new motivation was ingrained into the skateboarder experience. This profound change is what led to some of the first full length skate videos like World Industries “Trilogy,” to be filmed on a VHS camcorder. Subsequently, skateboarding videos were now incomplete without music and so propelled editors to raise their game once again and propel the art of editing. While some of the earliest sponsor me tapes were shot on Hi8, which afforded the same opportunity, the editing process was extremely problematic.

The first domino that fell for the Hi8 being eclipsed by the VHS began with the Hi8’s demand on filmmakers to mail in their original tapes; subsequently leading them to get damaged or lost for eternity. To this day, there are countless hours of lost footage from pioneering street skaters that never saw the light of day. While blank VHS tapes made editing easier and reduced the threat of lost footage, it was never a simple task like the click and drag functions of contemporary editing. In rare cases today, Hi8 and VHS camcorders are making a comeback; with their 500 pixel grain blend of unique colors schemes and intangible raw aesthetic. However ultimately the problems of shooting and editing on these analog shoulder monsters led to their digital extinction. Still, it wasn’t until 1995 when mini DVs and importing from firewire cables solved these problems and evolved skate video cameras into their next phase of evolution.

If you know skateboarding, you know the reverence the community holds for the VX1000. What you might not know is how impactful this camera really was for editing and its accompanying fisheye was for skateboarding’s aesthetic as a whole.

As the first portable professional grade video camera, the Sony DCR VX1000 instantly empowered amateurs to produce television quality filmmaking at a relatively affordable price. Originally used by the US military in Desert Storm and later adapted by the adult entertainment industry and reality tv, the VX1000’s durability, grip handle, ability to pick up a full spectrum of colors and sounds sent an entire generation of skate videographers to war in the streets. The art of skate videography was now booming and contributing to skate media in a way that skateboarders now greatly reminisce. With a new camera as the tip of the spear of skateboarding’s arsenal, it was the MK1 Fisheye by Century Optics that separated skating’s aesthetic as an industry and an artform, as full-length skate videos became the priority of every skate company. The irony is skate videos never really made a company any money but the intangible effect and what their contribution meant for skate history as a whole, were pure forces of culture that forever resonate with skateboarding. Many skaters look to this VX1000 and MK1 era as the birth of this golden era and some have even attempted to pinpoint its exact start.

In a story that has now become legend, skate videographer Dan Wolfe first acquired the fisheye from a catalog in 1999. Later that year at a session at the Santa Monica triple set, photographer Atiba Jefferson and Wolfe were capturing Jeremy Way’s frontside 360 down the triple, when Atiba marvelled at the fisheye’s unique capturing of the trick. Atiba called up Ty Evans, another revered skate videographer right there on the spot, praising the fish eye. Needless to say, Ty loved the look and by the end of 1999 every legit skate filmmaker had the VX1000 and the MK1. It is largely understood, the fisheye aesthetic provided a composition of landscape that revealed obstacles and tricks at the last second, speeding up the skating and making its revealing a reactionary blend of poetry in motion and raw physical action. With the VX1000's incredible ability to pick up sounds, the cacophony of raw street skating and obstacles erupting in your face, crowned the fisheye king for filming lines and gaps. All of these factors and more contributed to the VX1 and MK1 being adapted into every film maker's arsenal, as the quintessential camera in skateboarding’s golden era.

While the VX1000s technical aspects and professional grade standing combined its unique ability to capture sounds and colors with the MK1’s fisheye aesthetic; and thus, created a standard for the outpour of skate content, it was the editing capabilities awarded by mini DV tapes that began this era. Being far easier to edit than the complex systems and fragile nature of VHS and Hi8, a firewire cable was all that was needed to plug into a computer and begin editing. During the golden era of the VX1000, skateboarding saw some of the most influential videos ever created. Monumental videos like “Sorry, Yeah Right!,” “Photosynthesis,” “This Is Skateboarding,” “The DC Video,” “Baker 3,” and “Fully Flared” were all shot exclusively on the VX1000 and have since defined skateboarding history as a whole.

With the quality and accessibility of the VX1000 being ramped up and the MK1 lens defining the skate aesthetic for an entire generation, the VX1 will always be a catalyst to the evolution of skate video cameras. Still used in use today by crews like Love Park’s Brian Panebianco’s Sabotage videos and Ryan Garshell’s GX1000 series, the VX1000, over 25 years since its production remains a staple in the aesthetic and culture of skateboarding. Even with all the contributions of the minDV being undeniable, this original hero of the digital age would ultimately prove to be a trojan horse. As the miniDV proved to be problematic with its constant threat of glitching and rising costs per tape. Ultimately as we saw with VHS being eclipsed by a more favorable miniDV, HD cameras with fixed memory cards and DSLR cameras with SD cards proved a favorable replacement for tapes and DVs. 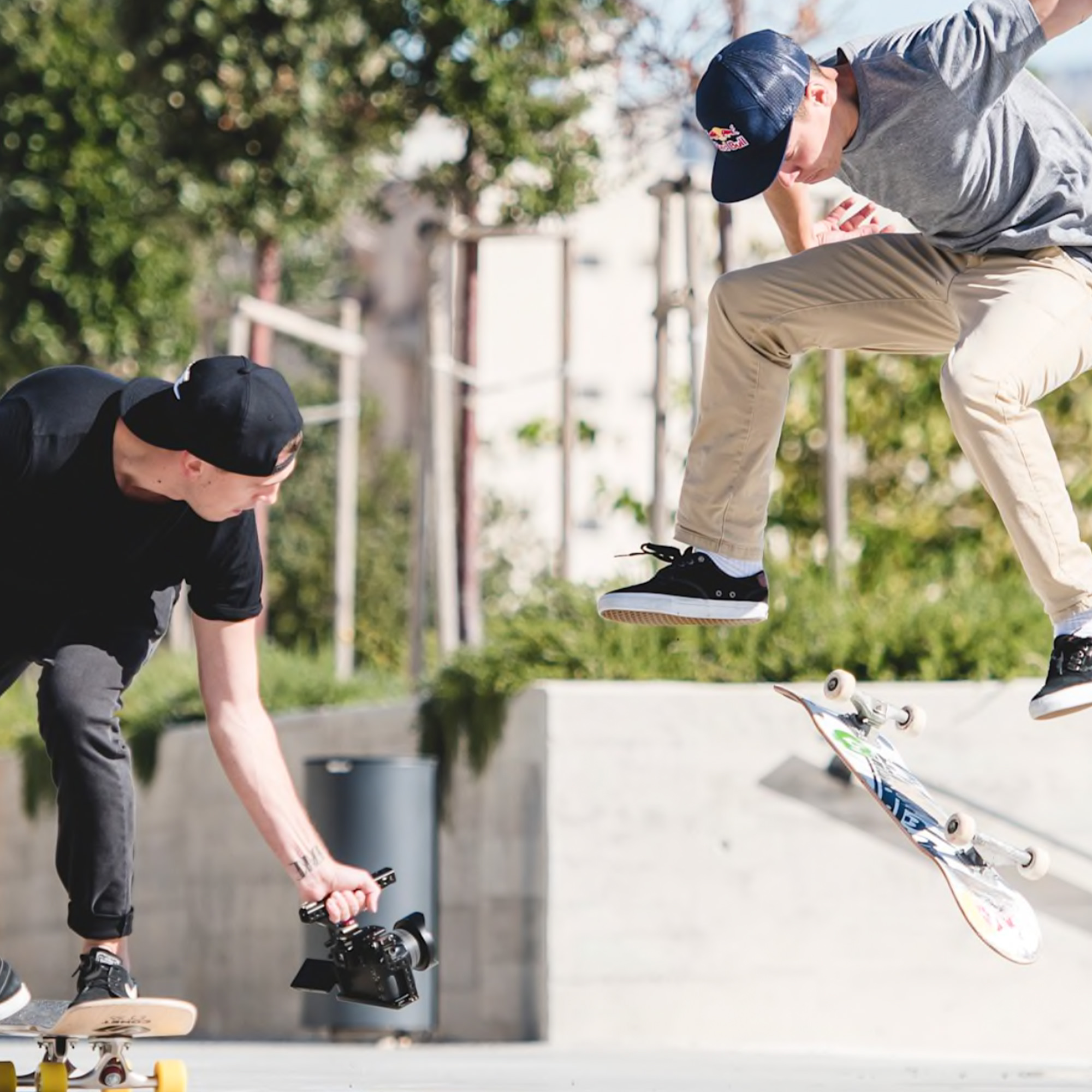