When Eunice Chang decided to quit her job to pursue skating full-time in September 2021, her coworkers were stoked. “I was at the same job for three or four years, and the whole time they were so supportive of me skating. When I did finally quit, they were like, ‘It’s about time. Go. You’re bigger than this,’” she recalls over Zoom from her apartment in Los Angeles.

Now, instead of balancing a near-constant cycle of all-day work and then spending the rest of the night at the skate park, Chang can dedicate her time to her passion and a growing social media following. Better known as @notcheetos on Instagram, Chang has garnered fans for her skate clips (the good, the bad, and the funny) and “Skate Dates” with fellow skaters like Lizzie Armanto, Victoria Taylor or “Skate Moss,” and Hilary Shanks.

“I feel super lucky that I've found something that I love and am passionate about and I feel fulfilled by and can have a career off of that. It's something that I've put a lot of time and work into,” says Chang. “I get to wake up and just do whatever I want. I still have that perspective every day of how I would still be at work right now but I'm outside at the skate park with my friends. I feel like I should have quit a long time ago.”

Growing up in SoCal, Chang first learned to skate during the summer between middle school and high school. She went to the mall with her mom to get her first skateboard, watched trick tutorials on YouTube, started reading Thrasher, and saw the movie Lords of Dogtown for the first time. But in high school, Chang stopped skating, until she decided to pick it back up again in college. It was around the same time that Instagram started gaining popularity, too, giving users a whole new portal of communities and interests to consume across the globe.

“When I first started, there were some girls posting skate clips on YouTube but not many. A few years later, Instagram was going off, and then all these girls started posting and it was way inspiring. Since other girls were doing it, I wanted to pick it back up again,” says Chang.

A few years later in 2018, she joined the L.A. skate crew Worble; today, at the age of 28, she’s climbed the ranks to what is considered pro (being paid to skate), but Chang sees herself differently. “I love where I'm at now. I just say I'm a sponsored skateboarder. I would never call myself ‘pro,’” she says. “Having your name on the board would be cool, but not something I feel like has to happen for me. Regardless of whatever status I am, I'm still going to skate.”

Ahead, Chang shares with NYLON how her personal style has evolved, finding a skate community, navigating social media, and more.

ON FINDING A SKATE COMMUNITY

“There just weren't as many girls skating six or seven years ago, and so I would just go to the skate park every day, by myself. I had one other homegirl that was like, ‘Oh, I want to get into skating, too.’ We would go together to the skate park and it was so intimidating and there's just all these people that are so good, who are flying around you. But every day we would just show up and skate. There's still skate park etiquette and rules you have to follow, like, ‘Don't snake people. Don't be in the way or sit on obstacles.’ Just being respectful to the other skaters.

When you're out there trying, people see that and they will respect your space, too. Then you land something sick and everyone's cheering because they see you or you see someone else trying something for so long. You just want them to land it, too. That's all the energy that gets shared and the vibe and the hype is so important for skateboarding.

That's how communities and different crews are formed. Social media also helped with making friends because just messaging other girls like, ‘Oh, that was sick. Where's that spot at?’ Or like, ‘Let's go skate together.’ Or like, ‘Hey, I'm going to be in your town. It'd be cool to link up.’ And going into different skate parks and different skate spots are definitely cool ways to meet new people.”

ON SKATEBOARDING AND SOCIAL MEDIA

“Social media definitely changed the industry and how people get discovered. I know a lot of frustration from other pro skaters because, traditionally, you spend a year or two years making a video, and then there's all this hype that's built up and then the video gets dropped. That happens once a year — all this footage that you've been saving and working so hard for that's being celebrated at that moment. But now with Instagram, every day there’s someone doing something crazy, an NBD, or inventing new tricks. There's just so much mind-blowing footage happening every day.

It's inspiring, but also can be overwhelming. Sometimes it's easy to get caught up in comparison, like, ‘Oh, they're doing this, I'm not as good.’ But I think that's when you need to take a break totally from social media. It’s good and bad.”

ON HER PERSONAL SKATE STYLE

“I’m definitely a little shirt, big pants girl. Wearing big flowy clothes always looks cool to me. I try not to wear clothes with a huge logo on them; I just like simple more. I'm flow for Nike, so I only wear Nike shoes, which I totally love. I love skating in Dunks and Blazers.

I started caring way more about how I dress only recently. Before I didn't, I was just like, ‘Eh, style, whatever, who cares what you're wearing.’ But now filming for a video part it's like, you're going to see these outfits for the rest of your life so make them cool. Style is actually important. Not superficial. Because I always thought it was superficial and you shouldn't care what you look like, but you should. Style is totally an expression of you and it's unique to you. It's very special.”

“I always thought it was cool. One of my teammates on Worble, Poppy Starr, was in the Olympics, so seeing a Worble board on TV was cool because those are your friends that you're seeing and to have them be showcased and highlighted in the biggest way possible is so sick. And from there, there's just more opportunities for them.

Skateboarders are athletes, and should be respected as such, but I definitely see why some people wouldn't want it to be in the Olympics to keep the spirit of it being an underground thing, something core and counterculture, punk rock. And if it's in the Olympics, then it's mainstream. But I feel like there's something for everyone in skateboarding. There’s going to be a group of people who want to film video parts and just skate streets, and then there’s people that want to skate contests and aspire to be in the Olympics, and they can do that — and that's cool.”

ON SKATING FOR THE FIRST TIME

“It's different for everybody on what advice you need to start. I'm always going to say support your local skate shop and be friends with people at the skate shop. They can recommend the most fun parks or cool skate spots, the best kind of equipment, and the best parts for your board that you need.

It's also fun to start with a friend or someone else that wants to learn. And if you don't have someone that wants to go with you, then it definitely takes extra courage to go. Especially with girls or women wanting to start out, I know it's very intimidating and it's easy to overthink a bunch of stuff; self-doubt and feeling like everybody's staring at me, which they probably are, if you're brand new or someone that they've never seen before.

But the most important thing is to have fun, personal progression, and personal growth. Try not to compare or feel like you're not at a certain level. It's not a race.” 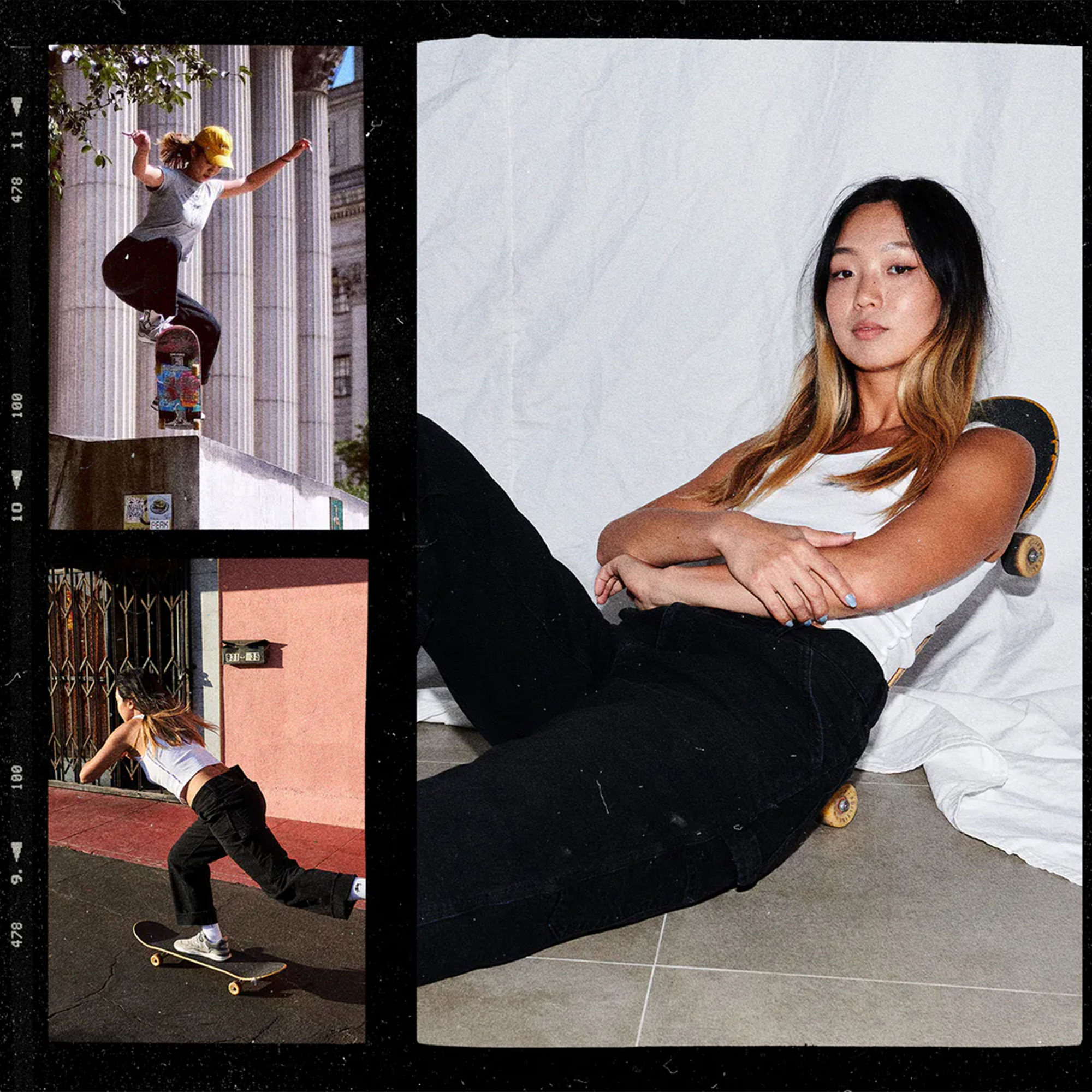