On a sunny Friday afternoon, about 20 competitors flew off the steps of the Iowa State Capitol in an attempt to land difficult flips and jumps for cash prizes.

The event was part of a larger competition taking place this weekend, called the Des Moines Streetstyle Open. Although it's in its inaugural year, there's hope it will become an annual event that will bring skaters from all over the country to compete in Des Moines' streets.

The event is modeled after the Copenhagen Open, which is often coined as the best competition in the world, according to Norm Sterzenbach, the president of Skate DSM.

"You got the Dew Tour and a lot of other events that are going to come to town, over the next several years, but we wanted something that is just ours — that we build — and turn it into something big that becomes a stop on the national circuit," Sterzenbach said.

The multi-day competition featured different skate contests throughout the metro at various local skating hotspots — each challenging different sets of skills — with men's and women's competitions at the world-class Lauridsen Skatepark on Saturday concluding the event.

Sterzenbach said that, although the Lauridsen Skatepark is the best and largest in the world, he wanted skaters to experience other parts of the city that make Des Moines a hub for talent.

"We have this amazing skatepark and of course we want to showcase it, but we also have this amazing city," Sterzenbach said. "We don't want people to come to town, stay at the hotel across the street, go back to their hotel order Grub Hub and then leave. We want them to see the rest of the community ... come skate where we skate."

So far, the event has attracted skaters from all over the country, including some high-profile professionals like Benny Milam and Ryan Decenzo, an Olympic qualifier — and the pair say they're glad to be back in Des Moines to watch and participate in the festivities.

Milam, who's from Minnesota, said Friday it's his third time back to Des Moines in a month and he couldn't be more excited.

"It's a dreamland, really. Seriously, like, it's something you'd see in, like, 'Skate 3.' It's just so big — like, there's almost too much to skate. Really. It's overwhelming. It's amazing," he said. "When I tell people I'm coming down here, they're, like, 'What are you doing in Des Moines?' ... Never thought I'd be down here skating, but here we are."

"I think it's, like, one of the best skateparks in the world — in my opinion," Decenzo said. "I mean, different people might like more street-style plazas and stuff, but for a skatepark, that's got it all."

And that's what Sterzenbach is excited to hear as he says the increased traffic to the Lauridsen Skatepark is evident from the different state license plates visible around the park.

The skatepark and the streetstyle open also give local skaters the opportunity to compete side by side with professional skaters — and sometimes win. Like 18-year-old Des Moines native Jacob Kelley, who beat out about 30 other competitors — including Olympic skater Jake Ilardi — to win a streetstyle skate competition on Thursday night.

"It's pretty surreal ... It still hasn't really set in yet," Kelley said. "We got a lot of up-and-coming skaters coming out of Des Moines ... I mean, when you surround yourself with pros, it only pushes you harder, so it's awesome."

Local talent will only get better and better as they continue to utilize the Lauridsen Skatepark, which will be exciting to watch as time goes on, Sterzenbach said.

"There's gonna be a lot of good skaters coming out of Des Moines because of that place in the next four to five years," Decenzo said. 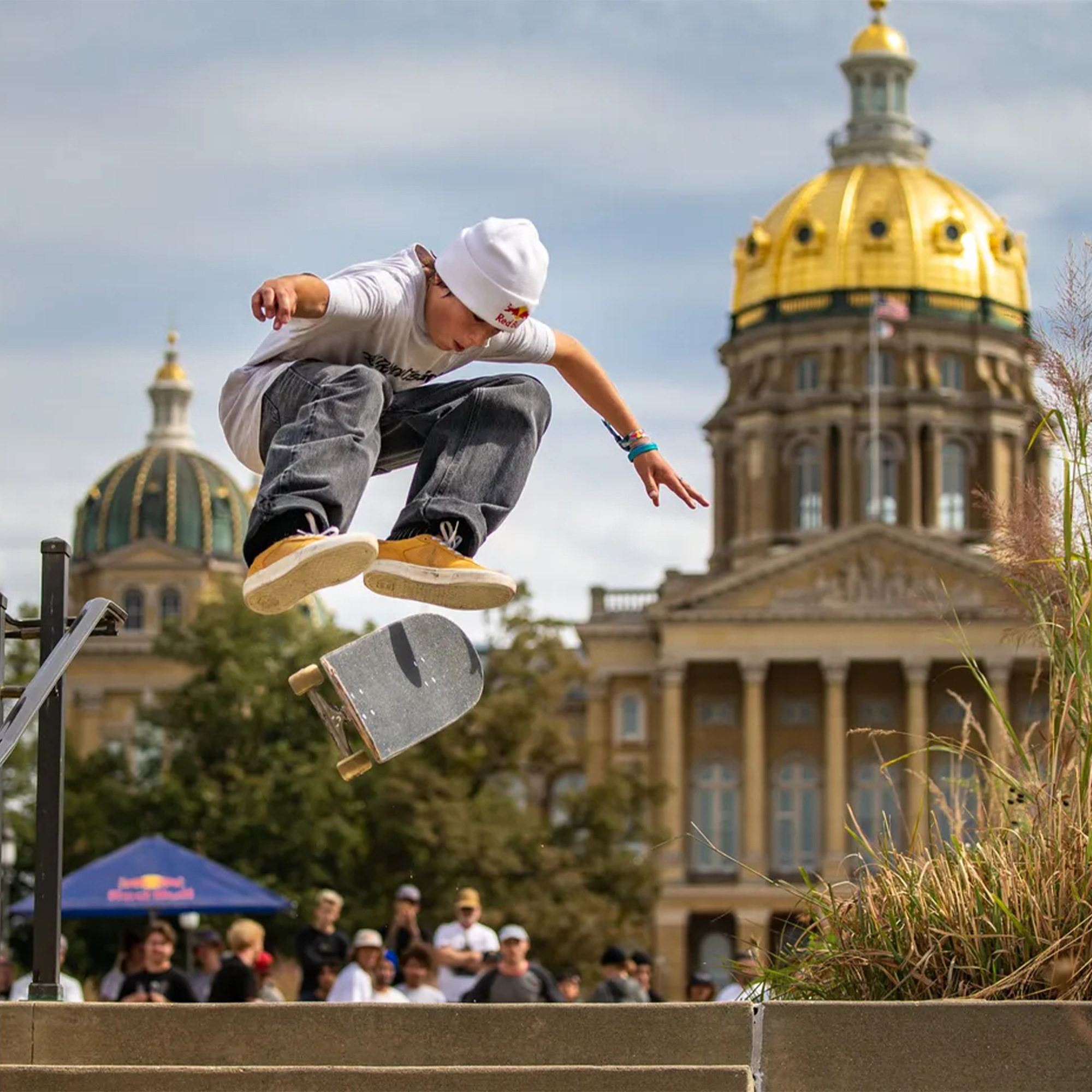