Daewon Song's skateboarding has been inspiring young skaters for three solid decades. From his technical skating on benches and over roof gaps in the 1990s for World Industries, to his early-2000s section in DVS' Skate More – where he skates rocks, rivers and street ramps – he's always done things slightly different. Which is perhaps why veteran skate photographer Reda still sees him as the "best skateboarder on Instagram".

In 2016, after nearly 20 years as a team rider on DVS, Daewon left for a new start in Adidas. Two years later, after 30 years at Dwindle Distribution as both a skater and the founder of Almost Skateboards, he upped sticks again, going on to launch the board company Thank You Skate Co with fellow pro Torey Pudwill.

I recently had a chat with Daewon about his 30-year career, why he left DVS and Almost, and some of his favourite things on and off his board.

VICE: First off, where did the name Almost Skateboards come from?

Daewon Song: Remember the film Almost Famous? It was one of my favourites at the time – I was like, 'Why don't we just name the company Almost?' Also, I'd tried so many tricks and other skate projects in the past where I was like, 'Ah, this almost worked,' or, 'That almost went down.' So that's how the name Almost came about in 2003.

What was it like both riding for and running Almost?

Yeah, we were getting a percentage of the brand as founders – it made it easier for us to focus on skating, filming and just getting back to the things we wanted to do. Everybody was skating and filming independently, going as hard as much as they could. You always felt like you were doing the least, so it put more pressure on you – and I was like, 'Wow, I better get to it for Round 3!'

When did you leave Almost to start Thank You Skate Co?

I left Almost around the end of October in 2018. It feels longer, like I've been out of Almost for a long time.

Why did you leave?

There were no hard feelings when I left Almost – they've always had my back at Dwindle [Distribution, which also distributes Enjoi and Blind, among others]. They always took care of me, but just for myself, just how I've always wanted to change... I wanted to change and leave a place that I saw as my safe place since the beginning. It's evolved and changed, but it's the place I started; I put 29 years into Dwindle.

That's a long time to be a part of a skate company.

Yeah, 29 years, and I finally just sat down and asked myself, 'Could I do it? Could I stay longer than 29 years?' I just thought: it's time to move on and check out what's out there, to see what could be. It might be stressful. It could be hard. It may possibly not even work out – I'm leaving my safe haven, and these guys know what they're doing – but Torey and I had talked about starting our own company before I left Almost, so we finally just thought, 'Let's do it!'

Torey was a big part of me wanting to do Thank You, because he's the one who really wanted to try a brand – he wanted me to be involved with him. Torey's had my back ever since I put him on Almost, and I thought, 'He wants to do it, this is the time.' It was crazy, leaving 29 years at Dwindle to do my own thing – and 19 years at DVS to go to Adidas.

What went down with DVS?

Thing with DVS was they ended up firing everyone who was a part of DVS – there was nobody left who were the original owners or who I really got along with, so I was surrounded by a lot people I didn’t even know. People may think, 'Yeah, Daewon's a sell-out, going to Adidas from DVS.' I was like: I did not sell out! I got paid more at DVS then I do at Adidas. People don't know that.

Yeah – I didn't leave DVS to get a bigger paycheque at Adidas. I was getting paid way more at DVS for a long time, and then they went through a hard time and I guess I had to take a few pay cuts from DVS – but when I got on Adidas they weren't paying me any more than DVS ever had.

Look, I'm not trying to put all that business stuff out there, I'm just saying that when I was riding for DVS I left because, when I was talking to Jascha Muller and Paul Shier at Adidas, I had a positive feeling about it. They were working with Matt Milligan and Kyle Foster – people who I know from the skate industry who were shoe designers there. I was like, 'They're family – people I've known for over 20 years of my life – and Adidas is the place I want to be.'

Crazy, a lot of people would assume otherwise.

Yeah, they don't know. It wasn't "an offer I can't refuse" – it sounded good and organically it felt right. The day I signed with Adidas, I was thinking, 'Actually, I don't know, I might just re-sign with DVS.' But I just didn't. At that moment, I didn't want change in my life. Skating-wise, I can change things up and skate things different, but who you back – sponsors, image and who you help build – it's hard. But I just did it!

Sometimes you've got to take that plunge.

Yeah. When I got on Adidas I started travelling again – we did six to seven trips in a year, and it really motivated me to skate again. I needed that push and I put that pressure on myself, and it ended up being for the better. I don't regret any of the choices I've made in the last three to four years – they're all choices I've thought about, had to make sure I'm 100 percent down with and am super happy to be involved with.

Nice. So now you're at Thank You, how does the graphics process work?

For Thank You, Torey and I just hope we can keep making stuff people are stoked on, and keep the fun in it. We're not so serious, and we do a lot of graphics that aren't original. They're original art, but based on recognised pieces of art. For example, we did the 7/11 thing. I used to be so into 7/11 – it was the place I'd go to get my honey sweet buns and coffee. I'd sit there at night on the curb. When I was a kid, the first gap I ever ollied was at a 7/11. So there are internal things between Torey and I in a lot of our graphics that mean a lot to us.

What about the Cheech & Chong board?

That's an homage to Tom Penny, and to show the unity Cheech & Chong have as homies is the same as me and Torey. Torey's going to South Africa soon and is taking boards with him to sign for people, and we're going to do more things like that. Thank You is another chapter of my life – I've now been professional for 30 years.

Thirty years and you're at the top of your game, that's impressive. Over all that time, who's been your favourite skater to watch?

My favourite skaters are Rodney Mullen, because of everything he's given to skateboarding and everything he's ever done. Christian Hosoi has always been a big influence. Mark Suciu, I like the tricks he does, his footing and the way he skates. Also Dennis Busenitz – I like his rapid fire aggression on a board.

And your favourite photographer to shoot with?

For me, it's always been Seu Trinh, Anthony Acosta and [Giovanni] Reda. Those three I went out with all the time.

Anthony shoots for Vans now – he's rad on a board, too.

Hell yeah, Acosta has been killing it.

My favourite album is Mobb Deep's Infamous. I used to listen to it religiously. I'd have my headphones on all day long, listening to every song. God!

Growing up, there was a painter called Boris Vallejo. He did paintings of dragons with hot warrior women riding on them, monsters and all kinds of creatures. I really loved his art. I don't know what kind of art he's making now.

I just want everyone to know they don't need so much. Everyone wants so much out of this world, but you have to look around yourself and have an appreciation for what you do have. I just wanted more and more, and I wanted to film and I didn't want anything else. Looking around at my life right now, I'm enjoying people, enjoying time with my kids and getting more out of life. It's not all about satisfaction and achievement. Enjoy your life, because there's so much in it. 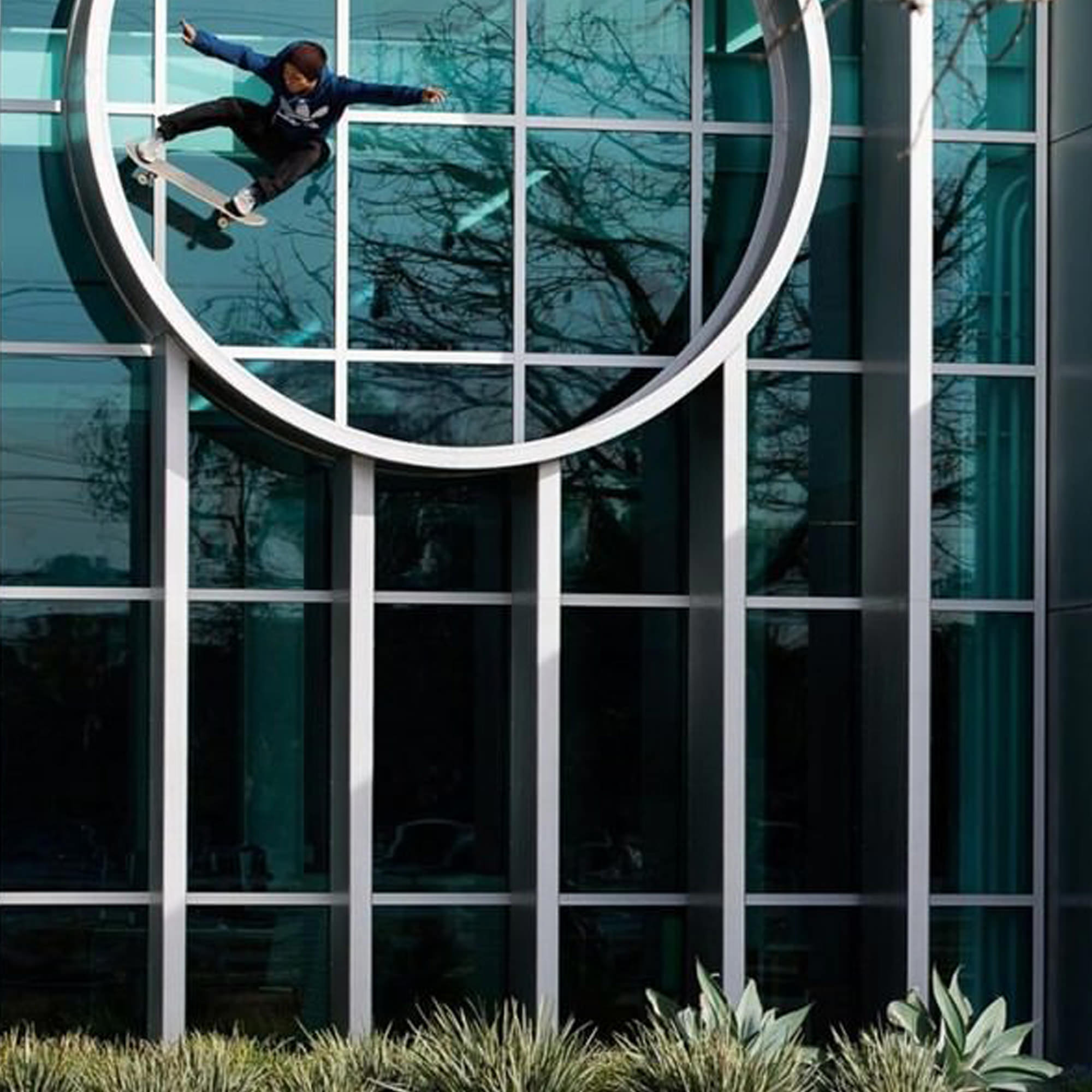