Police in Canada have called for an external investigation after disturbing video of a violent arrest went viral.

Footage posted on Facebook on Thursday which quickly spread throughout social media showed a 20-year-old being pummeled and having his head smashed into the ground — after he allegedly ran a red light on a skateboard.

The harrowing video shows the man screaming for help, as he's pinned to the street with a Barrie police officer on top of him.

The cop continuously orders him to stop resisting and put his hands behind his back — which the contorted man clearly cannot do with the full weight of the officer on top of him.

"Put your hands behind your f------ back!" the officer orders, before reaching back to unholster his taser and pressing it into his shoulder. "You want this?"

"Put your hands behind your back or I'm lighting you up," he warns.

When he orders the skateboarder to roll on his stomach, he can be heard replying "I can't!"; at this point the officer pistol whips the skateboarder in the face with the grip of the taser, while his arms are helplessly pinned.

Witnesses filming scream in dismay and beg the officer to stop hurting him; but when a second officer arrives as backup, the first only gets more violent: grabbing the skateboarder's hair, he flips him over before smashing his face into asphalt, prompting further screams from shocked bystanders.

"Get back!" the officer roars at the witnesses, "Get back, or you're going in!"

Blood pouring from his head with two officers now on top of him, the skateboarder attempts to lift his face off the ground, and the cop smashes him in the back of the head one more time.

As he is cuffed and dragged to his feet, the 20-year-old begs witnesses to collect his belongings scattered all over the street, before he is roughly thrown into the back of the squad car.

While the videos do not show what led to the confrontation, witnesses claimed the skateboarder had been given a ticket for failing to stop at a red light; he put the ticket in his pocket and skated on, prompting the enraged officer to zoom into oncoming traffic and in front of the boarder again, causing him to crash into the police cruiser. The officer got out and ordered him to stop skating on the road, but the skateboarder argued he wasn't allowed to skate on the pavement — which is allegedly when the officer lost it, according to witnesses.

She said the department was aware of the videos of the arrest, in which a 20-year-old Barrie male was charged with Cause Disturbance and Assault with Attempt to Resist Arrest and released on a Promise to Appear and an Undertaking.

"The images captured in the video are concerning to both the public and myself," she said, adding the officer had been "reassigned to alternate duties" pending the investigation.

Barrie Mayor Jeff Lehman vowed on Twitter: "I've seen the videos of the violent arrest on Dunlop Street. This will be fully investigated. I won't be ignoring this, and once we have all the details, there will be full accountability." 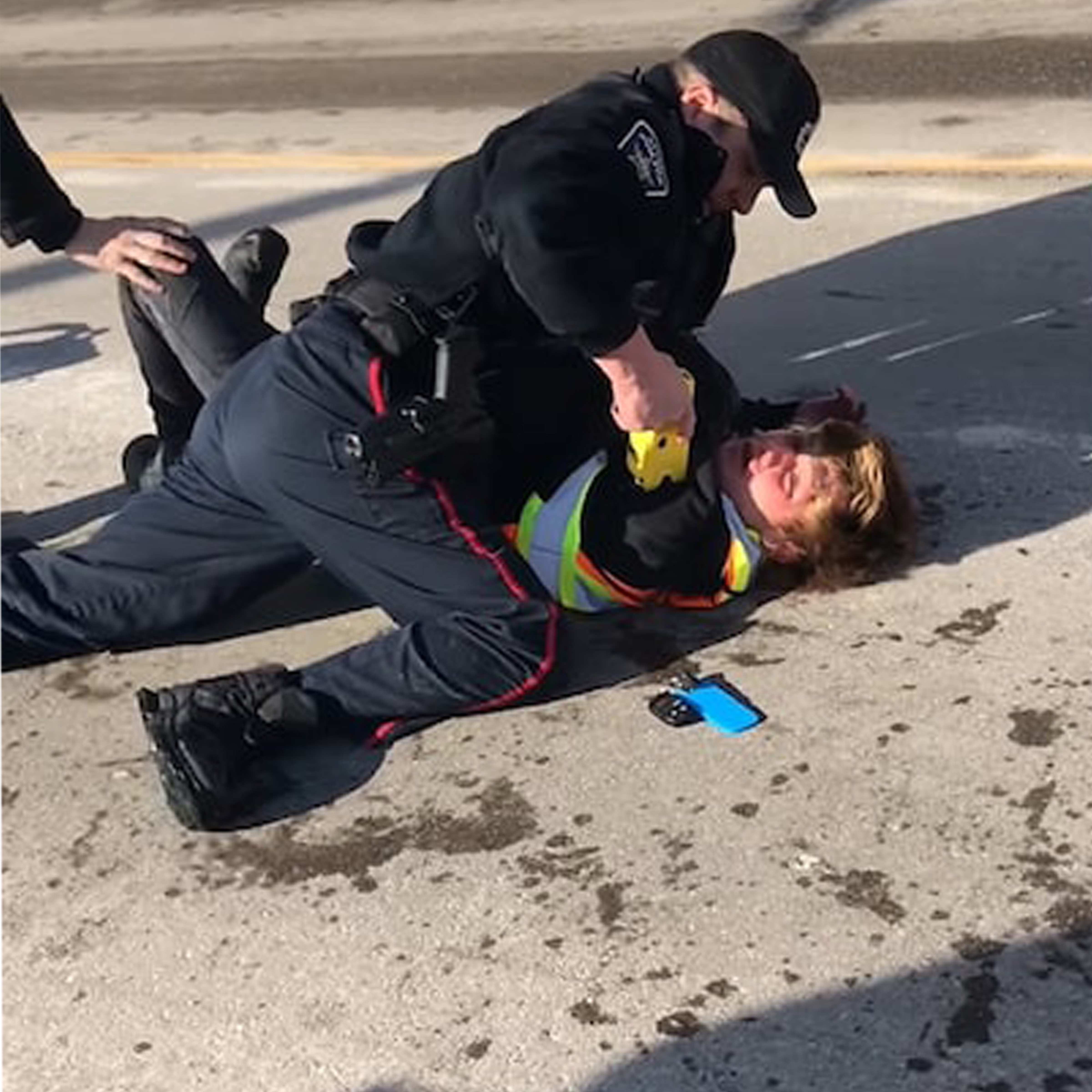