NEWPORT BEACH, CALIF. ó Sixteen-year-old Brighton Zeuner would prefer not to compare herself with other athletes. When the urge hits, ìI stop myself,î she says. ìIt's not healthy at all. I just focus on myself.î But the candles on her birthday cake this summer were so few that outsiders can be forgiven for engaging in a little side-by-side appraisal of Zeunerís accomplishments at age 16 against those of the most dominant sportswomen of our time.

Zeuner was just eight when Simone Biles turned 16, the year that the future Olympian claimed her first world all-around gymnastics title. Sixteen-year-old Megan Rapinoe was just a skilled club player in the backwoods of Northern California. In Serena Williamsís 16th year, she made her first appearance in the main draw of a Grand Slam, falling in the second round.

By the time Zeuner turned 16, this July, she had won two world skateboarding championships and two X Games gold medals and had made the U.S. Olympic team. And skateboarding might not even be her calling. More likely it is a means to something else, even if she hasnít decided yet what that might be.

On a recent weekday, the 5' 2" board-riding savant lay on her bed clicking on various municipal websites to see which local skate parks were open. Itís the COVID-19 lockdown version of a surfer who checks beach webcams seeking the best waves. Restrictions brought on by the coronavirus are loosening, allowing some of the parks near her Newport Beach, Calif., home to welcome skaters again, but many are still padlocked or ìare filled with sand or with dirt,î says Zeuner, now strolling into the kitchen, still thumbing her iPhone. ìOr water, which is weird.î

With the Tokyo Olympics and other skate competitions postponed, Zeuner is mostly homebound these days, with her parents, Brandon and Bridget; and her older brother, Jack; who is also one of her best friends. An accomplished musician, Jack helps out with Brightonís daily guitar lessons. She fills her time writing songs and designing clothes, including a successful collaboration with Vans. ìWhen [the pandemic] happened,î she says, ìcontest season was about to kick in. It just made me sit back and relax. Now I can just skate without any pressure. Ö I think everyone's kind of thankful for it in a way, because it can get so crazy with all the contests back to back.î

ìIt can be a job at times,î says Brandon Zeuner, 46. ìWe want her to be a child, a normal kid, but before COVID she was in China two or three times a year, in Europe, Brazil for two weeks at a time. She didnít have a proper birthday until this year.î

Most of her prior birthdays were spent pursuing championships or, before that, preparing for her all-out assault on the sport. It all began rather innocently, with Brighton following Jack to the skate park and playing nearby while he swooped around the bowl. ìShe was a girly girl,î he dad says. ìShe did all the things a normal six-year-old would do. Softball, socceróthey didnít really stick. She would play in the dirt while Jack skated. Finally I said to Bridget, ëLetís get her a skateboard.í î

When Bridget began capturing videos of their first-grader ìdropping into 10 foot bowls and doing things that werenít normal, we said, Maybe this is her thing,î Brandon says.

As Brighton remembers it: ìWhen I would do Girl Scouts or softballóor I tried ballet dancing, figure skating, all thatówhen my mom would take me to practice I didnít really want to go. But when I first started skating, it was a totally different feeling, like it was just different. There were no rules you had to follow.

ìI thought it was cool that you could invent your own tricks and then other people could do them. And when youíd go to a skate park, it was like daycare almost. ... I would feel like an adult, like, I can just get dropped off at the skate park! And then I just started realizing I couldn't live without it.î

Mimi Knoop, USA womenís skateboarding coach and a onetime pioneer in the sport, distinctly remembers her first encounters with Brighton at the Vans Combi pool in Orange County, about a decade ago. ìShe was very funnyósheíd just say the funniest things,î Knoop says. ìAnd then sheíd drop into this 12-to-13-foot-[deep] bowl and she would just rip. Ö We were all like, ëWho is this kid?í î

The ìparkî events in which Brighton has become a worldwide draw require athletes to spend 45 seconds swooshing around a smooth, pool-like structure, intermittently leaping over obstacles, executing airborne spins and building enough speed to eject themselves skyward at the bowlís edges. ìThink of it like a dance routine,î Zeuner explains. ìThatís what I always compare it to because I used to dance. And you just create your ownówhat is it called? Choreography.î

Behind this self-proclaimed ìnormal teenage girlî who giggles when her mom refers to her as an athlete is a competitor with a warriorís focus. ìThere are basically two kinds of skaters,î says Knoop, ìthe more artsy ones who like to film [make videos] and then those who can show up under pressure. The latter is Brighton.î It takes a rare breed to nail trick after trick during a 40-second run in a packed arena on the other side of the world, Knopp adds.

Zeunerís arrival on the scene has coincided with, or sparked, the heightened popularity of the women's side of the sport. ìFor me the timing was perfect,î Brighton says, ìbecause I got to watch it unfold and [reach] a bigger audience.î

She did more than observe. In 2016, she became the youngest-ever X Games athlete, at age 11. The day after her 13th birthday, she became its youngest champion. (She still holds both distinctions.) Four years ago she won the first-ever Vans Park Series World Championship. A few months ago, she learned sheíd be representing the U.S. when her sport makes its Olympic debut.

Her many other talents include choosing role models.

ìMy mom and I are in love with Serena Williams. She's such aócan I say bada--? She's such a bada--. It is so empowering watching how freakiní cool she is.î

ìWhether it's your mom or some girl you saw on Instagram,î Zeuner adds, ì[role models] are the people you pick up inspiration from, like you're kind of shopping for your personality and shopping for who you want to be. For me, when I was super young, it was BeyoncÈ. And my Mom.î

Zeuner finds it ìsuper cool that in skateboarding the women get equal pay with the guys.î But she becomes decidedly un-stoked when she hears someone say, Sheís good for a girl, or, So-and-so is the best womenís skater.

ìIt doesn't bother me like, Oh, I'm so angry at that. I just think, we're skateboarders, you know. You wouldn't say, ëHe's the best male skateboarder.í I never see that in articles.

ìI also saw this other thing that irked me,î she adds, her mouth twisted with consternation. ìThis one person posted something about ëdifferent types of skaters.í It was like, ëtrendy skaterí and then ëgirl skaters,í like that was a different type. That didn't sit right with me. We're skaters.î

Equality of all kinds has been a recurring theme during family discussions at the Zeuner householdótalks that have increased in quantity and depth during the pandemic. ìThese kids today, in general, are colorblind,î Brandon Zeuner says. ìWhen I was growing up there were sides to be taken. I donít see that in them. They donít meet kids in school. They meet kids on Instagram. [But] they are all authentic. Ö I donít remember it being this easy.î

ìSkateboardingóthat's the world I grew up in, and the people are just so accepting,î Brighton says. ìWhen all this stuff started coming out with Ö the whole George Floyd stuff, that broke my heart. It was like, What? This stuff actually happens? Ö So I educated myself. Unfortunately it still happens and obviously needs to stop. And people like that are super small-minded, and it's super ugly and super gross. It's 2020. It's a different time. Ö I'm just so thankful that I'm around people who don't think like that and don't have that mindset.î

She isnít around many people at all these days, and thatís fine with her. ìMy friends, they're kind of all over the place and, Alright, we're gonna do this! But I kind of like the downtime. I like being alone.î

When the house is quietest, the youngest member of Team USA 2021 can be found writing stories or songs, or with her nose in a book or her eyes glued to a documentary. ìOh, and going on walks with my family. It's like therapy. We just get to be quiet and walk around. It helps me collect my thoughts. It's like meditating.î

If and when the Olympic lights come on in 2021, says Knoop, her goals for the most audacious, helmeted 16-year-old girl since Joan of Arc are simple. ìI want Brighton to achieve whatever will fulfill her,î she says. ìWhether itís an Olympic medal or starting her own business with her clothes, it doesnít matter as long as itís what she wants.î

ìEveryone wants to be the best,î Brighton says with a shrug. ìBut I want to use [skateboarding] to dive off into other things. I want to have a fashion brand when I'm older. I want to go to FIT [Fashion Institute of Technology] in New York. I want to have an online shop, to make people confident with the clothes I design. I want to make music and be a good musician. I have so many movie ideas that are, like, Quentin Tarantino vibes. I'm just as passionate about all those things as skateboarding.î 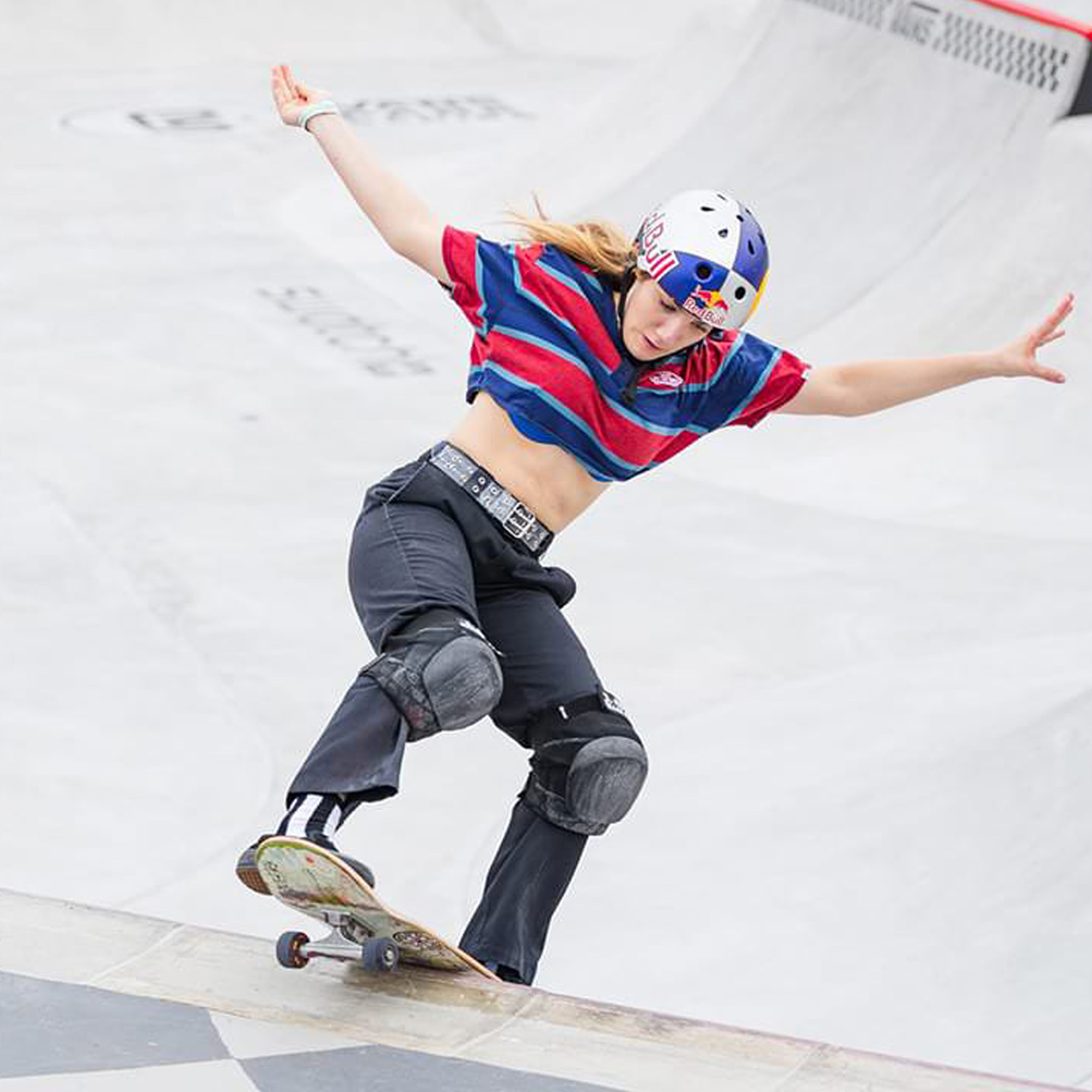