Following a surge in demand for the adidas Samba — a football shoe that is also widely beloved by the skate community — we asked skate expert Anthony Pappalardo to draw up a shortlist of his favorite non-skate shoes that also happen to be board-appropriate.

Skate footwear is a relatively young market sector. While some brands produced skate shoes prior to skateboarding’s boom in the ’80s, it wasn’t until the early ’90s when the market opened up; first with core brands, followed by athletics companies.

Skateboarding is a unicorn where the majority of dedicated footwear is based on existing models from other sports. Think the Converse Chuck Taylor; Nike Air Jordan I; adidas Stan Smith and Gazelle; Reebok Workout; and in the late ’90s and early ’00s, a lot of hiking and running hybrids that resulted in the bloated “Baked Potato” era (e.g. the infamous Osiris D3). Even the Vans Era was based on more simple shoes of the time. Skateboarding has always borrowed or been inspired by basketball, tennis, and football culture rather than trying to break entirely new models.

Skateboarding is a foot-driven sport, so shoes engineered for football (the Samba) or tennis (Stan Smith) — slim models that allow foot control — are a good fit. Less is more, and the shoes that could be found on the sale rack at department stores came with the right price point. When Etines, Airwalk, Vision Street Wear, and Vans began to produce new models specifically for skating in the ’80s and ’90s, the designers and riders were often pulling from those models rather than trying to innovate from the ground up.

By the late ’90s, the core skate brands looked to integrate more technology, sometimes using blatant design gimmicks in their designs — think random bits of plastic, fake air bubbles, and stash pockets — to stand out. This resulted in bulky shoes that rarely resonated with the wider public. Aside from the aforementioned D3, the Supra Muska Skytop, the occasional DC, and a few other outliers, puffy shoes failed to break new markets and many sponsored skaters lamented the push away from slimmed-down vulcs.

In the current landscape, bigger brands have begun adapting non-skate models already popular in skating for skateboarding, but that doesn’t mean there aren’t plenty of non-skate shoes out there that work just as well. When constructing this list of the best shoes for skating in, I looked to models that aren’t currently evolved for shredding. One caveat is that some of these silhouettes have been used for exclusive collaborations; I chose the garden variety versions.

The adidas Rod Laver is one of the earliest signature tennis shoes. With a mesh and suede toe cap construction, the model wasn’t as popular with skateboarders in the ’90s as the Stan Smith, but it’s still a clean, functional cup sole that’s readily available. Unlike the Stan Smith, which has been adapted for skating several times by the Three Stripes Brand, the Rod Laver remains a core non-skate shoe. Savier released a very similar version in the early '00s with professional skater Tim O’Connor, but many felt it lacked functionality due to its sole that lacked grip due to its flat construction and sublimated “poem” inscribed in it.

While they’re described as skateboarding-inspired, the adidas Court Rallye Slip Shoes are not technically skate shoes. The shoe boasts sustainable Better Cotton materials, making them a environmentally-minded choice for under $60.00. The Court Rallye Slip’s benefits are its simplicity. It’s a canvas vulc with ankle padding that offers rip and no-frills — a perfect option without any unneeded noise.

The newest model on the list and a bit more elusive, the Jordan Series .02 is a wild one as it looks more like a skate shoe than a basketball shoe — or a Jordan at all. That’s mostly because Jordan Brand has extended into the lifestyle space for years, but the vulc construction, extended suede toe cap, and overall slim construction make it perfectly adaptable, and even on the secondary market you can grip a pair for less than $100.

There’s no denying that Nike SB Dunks are the most sought-after skate shoe, and while we can argue whether the demand is driven by actual skateboarders, the Dunk’s an undisputed classic, whose synergy with skateboarding predates puffy tongues and release day riots. So, if you like the feel and look of the Dunk but want to avoid the mark-ups, the general release Air Jordan I Low and High is a viable alternative that still offers the quality, fit, and feel of the Dunk, minus the slight tweaks for skating.

The Nike Retro GTS was both a sleeper hit and an anomaly in 1996. Known for forward-thinking tech design, the Retro GTS was a simple canvas vulc with a mini Swoosh that several skaters adopted due to its cheap price tag and board-feel. In 2005, Supreme released five colorways of the GTS, including a bold yellow iteration, but it’s back in general release with an updated insole and durable canvas construction.

There’s no cultural moment that can be tied to the Onitsuka Tiger GSM, but its construction and simplicity is undeniable. The GSM has been a deep-cut choice for years, based on its availability, classic colorways, and grippy cupsole. Sure, the complex flair branding overlaps the flick-friendly suede side and toe area, but honestly, it just adds another layer of durability and with a slim, minimalist construction, it’s a solid option with out-of-the-box feel.

Sans shoe sponsor for most of the ‘90s until joining Axion, Guy Mariano had a single Converse ad circa 1995 before leaving. Along with several of his teammates, he was often seen skating the Pro Leather, most notably in Girl Skateboards Mouse (1996). Converse CONS has released the Pro Leather several times, including a furry suede version with Hopps Skateboards bolstered by a video piece with Jahmal Williams and Steve Brandi and filmed by Josh Stewart, but for now, the standard version is out there and eager to be skated.

Due to a cultural nexus sparked by the Beastie Boys and Plan B skateboards, the Puma Suede was undeniably ubiquitous in the early ’90s. Before the term “deadstock” became common nomenclature, skaters were combing “budget ass stores,” looking for any pair of Suedes or Clydes they could find, often grabbing a seam ripper to remove the flair. Puma failed to capitalize on the trend and launched a skate program with Robbie Gangemi, Kien Lieu, and others in the mid-’90s but the classic suede is available now en masse and just as skateable as it ever was.

In 1985, Reebok put cross-training on the map with the Workout. Every brand, including Fila (whose Fitness shoe aped the dual gum cupsole design) wanted a piece of the market, but Reebok already had a foothold, and along with the Club, the Workout’s footwork-friendly design and wraparound toe cap engendered itself to skateboarding. Kareem Campbell’s iconic Duffs KCK design was highly influenced by the Workout and became an instant classic, and the current Workout Plus offers all the lines and feel of the original with one warning: that buttery soft leather is prone to rips, so have Shoe Goo on hand.

When you think of Vans, you think of skateboarding, but the BMX Slip-On is a bit of a lifehack situation in that it offers the Wafflecup construction, Popcush insole, and a rubber toecap that their skate line doesn’t offer. If you’re looking for the streamlined fit and look of a slip-on but want the impact protection and feel of a cupsole plus added ollie resistance, slide into the BMX zone on Vans.com and grab this heater.

In the ’90s, before shoe programs were a pro skater’s most lucrative sponsor, many sponsored skaters sold what was in their box and wore whatever they wanted. The Fila Original may have been a niche East Coast-centric shoe, but its dual cupsole construction, simple colorways, and cushy midsole made it a cult classic. Beloved by Stevie Williams, DGK released a collaboration with Fila in 2005, using premium materials and the classic gum sole, but the Original Fitness is still widely available and priced to move. 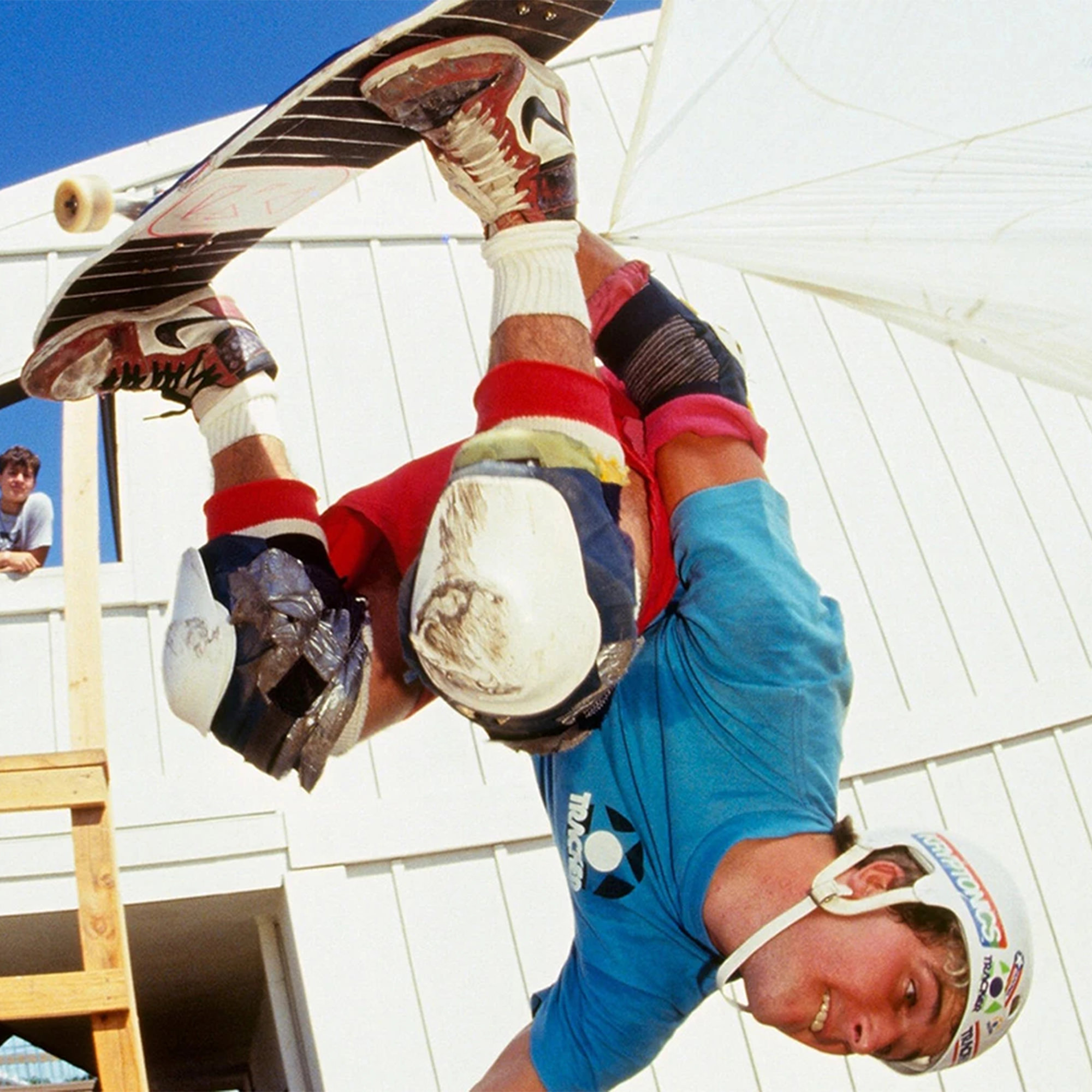