The best $141 I ever spent: A skateboard

The best $141 I ever spent: A skateboard

It took me 15 minutes to decide that what I needed to do during the pandemic was learn how to skateboard.

It wasn’t an impulse decision. I had been thinking about getting into skating for a few years now — like you would a tattoo or a piercing — but could never justify the “risk” it posed to my main hobby: amateur bike racing. How stupid would I feel if I broke a wrist just trying to push down the street, completely negating hundreds of hours spent training on the bike?

When the pandemic wiped out any chance for bike racing in the foreseeable future, now seemed about as good a time as any to finally jump into something I had been admiring from afar. After months and months of watching skateboard videos — developing this theoretical understanding of why I enjoyed one person’s skating over another — I wanted to know how it felt.

In short: It looked fun, and I wanted to do it. It was also nice that it was the total opposite of cycling in that I wouldn’t need to get a bunch of fancy, expensive equipment to participate. All I would need to skateboard was to simply buy a skateboard.

On a Thursday afternoon in early April, after quickly pulling together some recommendations from friends — what size board do I get, how big should my wheels be? — I bought a complete skateboard off the internet for $141.60. It was the easiest decision I’ve ever made in my entire life, despite the fact that I am a 31-year-old man with no health insurance.

There’s a lot of shame in skateboarding as an adult. Nothing reminds you of your own mortality more than being bad at something you maybe used to be good at, while also being judged by teenagers, as Dan Ozzi recently wrote for MEL. “I wouldn’t dare become one of those old guys I hated as a kid,” writes Ozzi about getting back into skateboarding during the pandemic. “The kind of grown man who thinks he’s impressing teens by telling them he used to skate ‘back in the day’ and asks to use their board so he can show them the world’s shittiest kickflip.”

Picking up skating in your 30s and beyond, the trend stories tell us, signals some sort of desperation. You’re either going through a midlife crisis or trying to hide one. No one just picks up skateboarding, it would seem. You must be going through something if you think that awkwardly rolling around on your useless wooden toy, risking a hospital visit the entire time, is a good idea.

I considered this, and then decided not to worry about it. It was the easiest, most logical choice: What good would it do me to compare myself, an adult teaching himself to skate, to those who’ve been skating for decades, or the teens who have nothing to do but throw themselves off stair sets? I was special in my own incompetence, and therefore beyond comparison. All I had to do, then, was go skate.

The sheer simplicity of it all was a revelation. I had spent the past decade devoting an incredible amount of time, money, and energy into being a perfectly mediocre amateur bike racer. I spent dozens of hours a week riding my bike, driving hundreds of miles every weekend for races, and planning my vacations as if they were training camps. And up until a few months ago, this is exactly how I wanted to spend my free time. I loved the feeling of the slow gradual building of fitness and skills that bike racing demands — to know that as long as I keep training and racing, I’ll eventually be lining up with the pros. But because bike racing is, well, racing, every time I got on the bike, it wasn’t really for me, it was to beat the person next to me. Bike racing forces us to find worth in relation to others.

In the same week that I set a new all-time 20-minute power record on the bike — a sort of benchmark for cycling fitness — I also landed my first 180 on the skateboard. The former felt unceremonious; an inevitable result of years of hard work. The latter felt sublime, like I had unlocked this new and unknown ability within myself. Every day, I would get on my skateboard, roll over to a nearby schoolyard, and over the course of an hour, have these little moments of, “Holy moly, I can’t believe I just did that!” I wasn’t just teaching myself how to skate, I was teaching myself how to be not good at something.

There is a pressure, I think, to be good at everything we do. That everything in our lives must somehow perfectly match our talents and passions, and if we can just find those, then everything will be fine.

But when we’re bad at a specific thing, even if it’s a silly little hobby, we turn it into an indictment of ourselves. We don’t feel bad because we’re bad at something, we feel bad because others are better than us. They’re more productive and successful because they’ve “found” their thing, we tell ourselves, and the fact that you haven’t means that you’re in the wrong place. We dress it up with language like “talent” and “passion,” but it’s only capitalism trying to maximize productivity.

This sort of pressure has inevitably bled into our leisure time. It’s not enough to clock in and earn a paycheck; we need to have side-hustles and passion projects. A sentiment that is now so commonplace that the VC industry is champing at the bit to usher in this “hustle economy” — a grim future in which everyone is passing the same $20 around to watch yoga classes and makeup tutorials. When we think about getting into a hobby, we’re inundated with guides to The Best Ways to get into them, or cautioned against making Beginner Mistakes. When it comes to learning something, there’s a push to fast-forward through the awkward learning bits, or better yet skip them entirely. How can you possibly make any money off of your passions if you aren’t any good at them?

Skateboarding, because it is so indescribably difficult, diffuses this pressure to be “good.” Among skateboarders, it’s commonly known, accepted, and celebrated that the pros bail all the time. You might not be able to do a backside 360 over a wall and into a 10-foot drop onto the street, but you can watch one of the best skaters on the planet, Mason Silva, struggle for hours to land it and relate it to your own experience of struggling to land a stationary kickflip on an empty tennis court.

It goes both ways. Recently, I was struggling to land a frontside boardslide on a shin-high bench at the nearby skatepark. For over an hour, I would try and try and try this basic trick on this simple feature while much better skaters effortlessly skated the much gnarlier stuff around me. After dozens and dozens of failed attempts — sometimes I’d barely get onto the bench, sometimes the board would get hung up on the bench and refuse to slide, sometimes I’d get onto the bench but my weight was distributed wrong so the board would slide out from under me — I managed to almost land one. My rear truck barely got off the ground, I slid on the bench for a fraction of a second, and I landed with half of my foot dragging on the ground. Immediately, a nearby skater, who up until then hadn’t even acknowledged my existence, shouted, “DUDE, you’ve got it the next one for sure!” He knew, and he understood.

Skateboarding has taught me that I can acknowledge that I’m bad but still celebrate when I manage to do something good. I know that my skating is, objectively, not very impressive, but I still can’t help but feel jacked up after I ollie over a traffic cone. (Luckily, I haven’t seriously hurt myself — knock on wood — enough to really question if doing something where I mess up a lot is worth my time.)

It’s been a revelatory experience, given that the pandemic and economic recession has absolutely destroyed any lofty career goals I might have had. In the Before Times, I might have blamed my misfortune on a lack of effort or talent — but now that things are truly in the shitter for very obvious reasons outside of my control, I can finally accept my station in life.

My entire professional career has been marked by trying to replicate the success of my peers — of setting these arbitrary benchmarks based on the accomplishments of others. Trying to learn how to skate in my 30s has led me to question that. Why should I feel like I need to match the output and ambition of others? I know it sounds a little New Age-y, but being thrown so violently off the careerist treadmill, I feel like the best, and maybe only, thing I can do right now is to just see where my path takes me. Merely existing is so difficult right now that I owe it to myself to celebrate all the small successes, even if they don’t exactly line up with this imagined ideal trajectory I’d like my life to take. 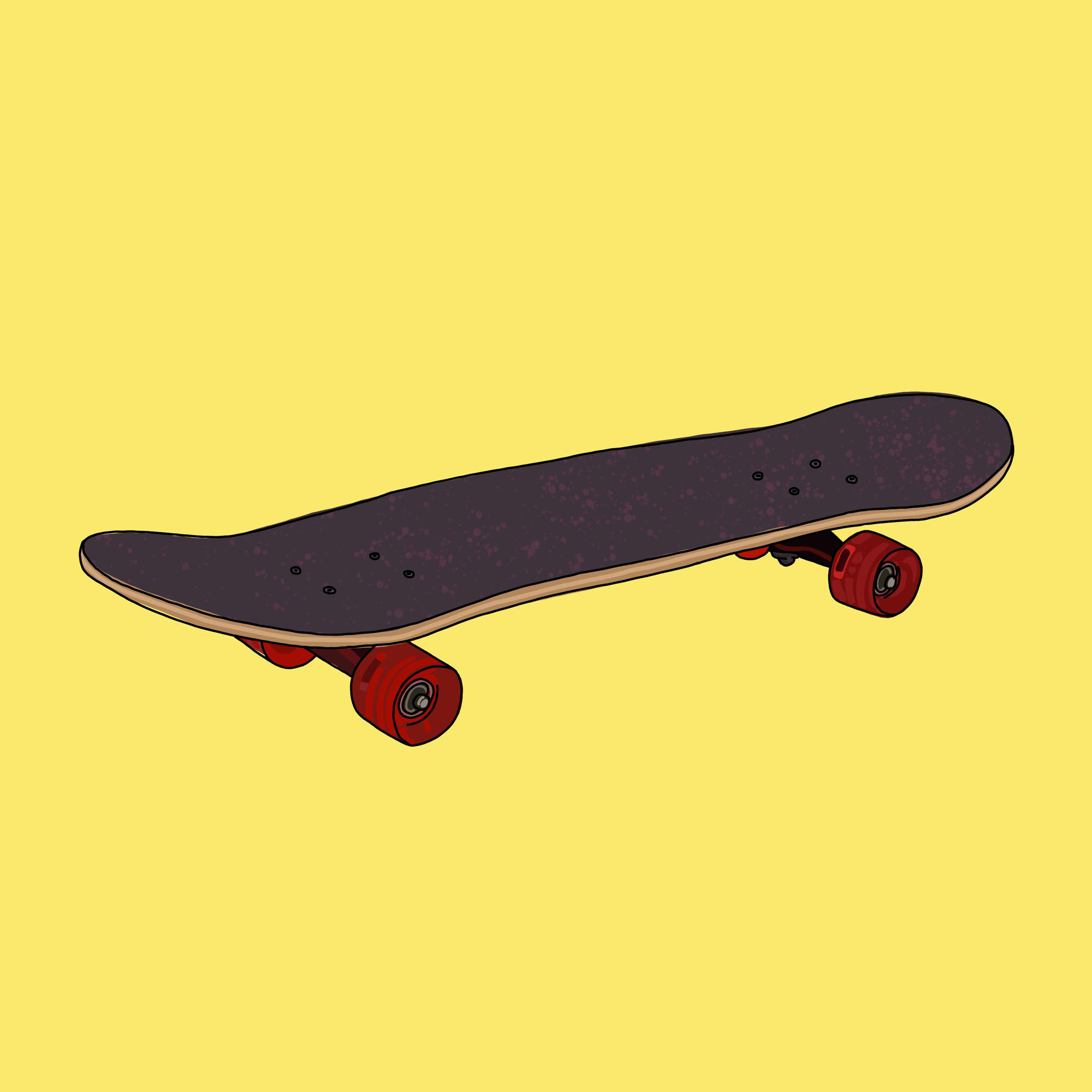