Best 8 female skateboarders in the world

Best 8 female skateboarders in the world

Skateboarding has predominantly been male dominated. However, one of the raddest aspects about skateboarding is how women have been there from the very beginning. We don’t mean sitting on the top of the ramp or lounging out by the empty pool–we mean as pros.

Now in 2020, women are the new face of skateboarding both in the streets and in the skateparks, as the last five to ten years women in skateboarding went from a peppered few to a full-fledged movement. As a testament to this movement, we see more women throughout the world represented all across major media outlets for their accomplishments on a skateboard and we see skateboarding as the largest female sport in Afghanistan.

While some women believe they owe skateboarding a debt, it is in fact the other way around. Women in skating have made skateboarding more free, more untouchable, more bold and more unique; and they have done so since it's conception.

Patti McGee was the first female professional skateboarder and the first Women’s National Skateboard Champion in 1964. By 1965, McGee was pro for Hobie Skateboards, where she traveled from town to town on a national level demonstrating the new sport sweeping America. Patti even appeared on the popular Johnny Carson Show and would go on to land two covers in 1965: Life Magazine (May) and Skateboarder (October). In 2010, Patti McGee was the first female skateboarder inducted into the IASCs (International Association of Skateboard Companies) Skateboarding Hall of Fame, and holds the world record for fastest women on a skateboard, at an impressive 47mph.

Thanks to pioneers like Pattie McGee, women in 2020 had a 60-year launching point for future generations. Although skateboarding popularity crashed after McGee’s prominence, there has always been female representation in skateboarding. Definitely not enough, but there always has historically.

Throughout the 90s we saw Elissa Steamer and Jaime Reyes ripping the streets to shreds and by the turn of the century we had girl skaters like Vanessa Torres and Maria Del Santos flipping into handrails and dominating the X-Games podiums. Now in 2020 we have some of the best female skateboarders in the world going head to head in the Olympics, as more women see other women killing it, the best female skateboarders in the world keep pushing the limits of what’s possible. It’s more than just, what’s possible for women but what's possible for skateboarding.

Here are some of the best female skateboarders we’ve had our eye on all 2020.

While women in 2020 are generally substantiated in their careers by the contest aspect of skating, Alexis Sablone belongs to the streets. Don’t get us wrong, Alexis has supreme success in contests–seven X-Games medals to prove it––but she certainly has made it known she prefers street skating. Made from the mold of street skaters like Elissa Steamer and Jamie Reyes, Alexis has filmed video parts for her sponsors WKND and Converse with switch flip fifty-fifties in the cutty streets of NYC. Even so, Alexis secured a roster spot on the first Women’s USA Olympic Skateboarding Team and perpetually breaks the mold as an MIT graduate with her degree in Architecture. No wonder she prefers the streets! Alexis has combined her two worlds with skateable architectural sculptors in West Palm Beach, Florida and Stockholm, Sweden. All of this while assisting in the designs of her pro model boards and trucks. Alexis can literally do anything.

Margielyn ‘Margie’ Didal is one of the rare skateboarders who has every aspect of skating in their repertoire. Flatground, ledges, stairs, rails and the ability to comb through them all with consistency and style; Margie is one of the most exciting girls in the skate scene. Every once in a while, a skateboarder comes along just as capable of making us laugh as melting our face (al la Eric Koston). Her infectious personality makes her a crowd favorite in any contest she enters, and being one of the first female skaters from the Philippines she endures as a testament to the growing global tidal wave that is ‘women in skating.’ Already a champion of the 2018 Asian Games, it is only a matter of time before Margie lands her first X-Games or SLS gold medal, as she has already appeared on the podium of several contest circuits both in the US and abroad.

Some skateboarders were born to be on a skateboard. Samarria Brevard is that skateboarder. Quickly making a name for herself with her 2017 X-Games silver medal, the Riverside native has drawn comparisons as the “Serena Williams of skating.” While being reluctant to the comparison initially as she believed it was based on her skin-color, it has been made increasingly clear that it is rather due to her powerful presence on a skateboard and her ability to inspire people off of one. In a world riddled with female underrepresentation, skateboarding sees Samarria for her skills but also as the first black woman to win an X-Games medal. With goals to one day make the Olympic team, Samarria is currently in the streets filming for her sponsors Enjoi and Etnies, with music projects underway and future plans to own a vegan restaurant. Samarria reminds us that as skateboarders, we can accomplish anything we set our minds to. Even 360 flips down ten stairs.

There may be no better example of the empowerment of women in skating than Rayssa Leal from Brazil. With the rise of social media and more women who’ve started skating thanks to female representation in the sport, prodigies like Rayssa are quickly rising in the ranks of female skating. Rayssa viral video sent shockwaves throughout the skate scene, with her heel flipping a stair set in a fairy costume (tutu included) in 2015, and since has gone on to secure sponsors like Nike SB and place second in the 2019 SLS World Championship Finals. In a very short time, Rayssa has transcended the landscape of professional skateboarding, navigating an industry that wasn’t always kind to women and often looked for ways to exploit them.Thanks to rippers like Rayssa and the women skaters who came before her, the future of skateboarding is in good hands.

At the young age of 19, Alana Smith has already made history as the youngest medalists in X Games history (age 12) and the first woman to land a 540 McTwist in competition. While she made her start on the vert ramp, Alana is easily one of the best street skaters in 2020. There is one word that best encapsulates Alana Smith: Fearless. As Alana grew up swapping out her dirt bike for a skateboard, she now embodies the very inspiration that got her started. Alana first saw women skating watching the X-Games as a little girl. And now, young girls in her shoes get to be inspired by one of the most dynamic skaters in 2020, watching her backflip mini-mega ramps in big-air contests and enjoying the professional ranks with Hoopla Skateboards.

While Patti McGee was the first female pro skateboarder Elissa Steamer is the embedded symbol of women in professional skateboarding. Elissa Steamer became a household name as the only female skater to appear in the first five-installments of the Tony Hawk Pro Skater video game franchise. Girls had a character to log on and play and while this contribution was less designed by her own powers, its significance is paramount to how women would be represented in the years to come. Now, skateboarding video games, skate team videos, television shows, etc., are not complete without a cast of female skaters. It was skateboarders like Elissa who continue to represent women in skating for their abilities regardless of their gender. Now as one of the sultans of skating and the pillars of skateboardings past, every skateboarder (regardless of gender) owes their respect to the legend that is Elissa Steamer. Who is still very much ripping in 2020. Check out Baker 4 or the countless social media posts to see for yourself.

The name Leticia is synonymous with the best female skateboarders in the world. More than a skateboarder, Leticia Bufoni has become an icon, providing once again that women can not only do what any man can do but do it better and on their own terms. Hailing from Săo Paulo Brazil, Leticia began skating contests at a young age. She quickly prevailed as one of the best female skaters, landing sponsors such as Nike SB, Plan B and Red Bull. As a regular on the X-Games podium, Leticia has won five gold medals with three bronze and three silver. She has her fair share of Street League trophies to go along with her impressive video parts as well. With over 3.4 million followers on her social media channels, Leticia is arguably the most visible woman in skating. Inspiring countless others to step on a skateboard for the first time and remains a guiding force for skateboarders everywhere. 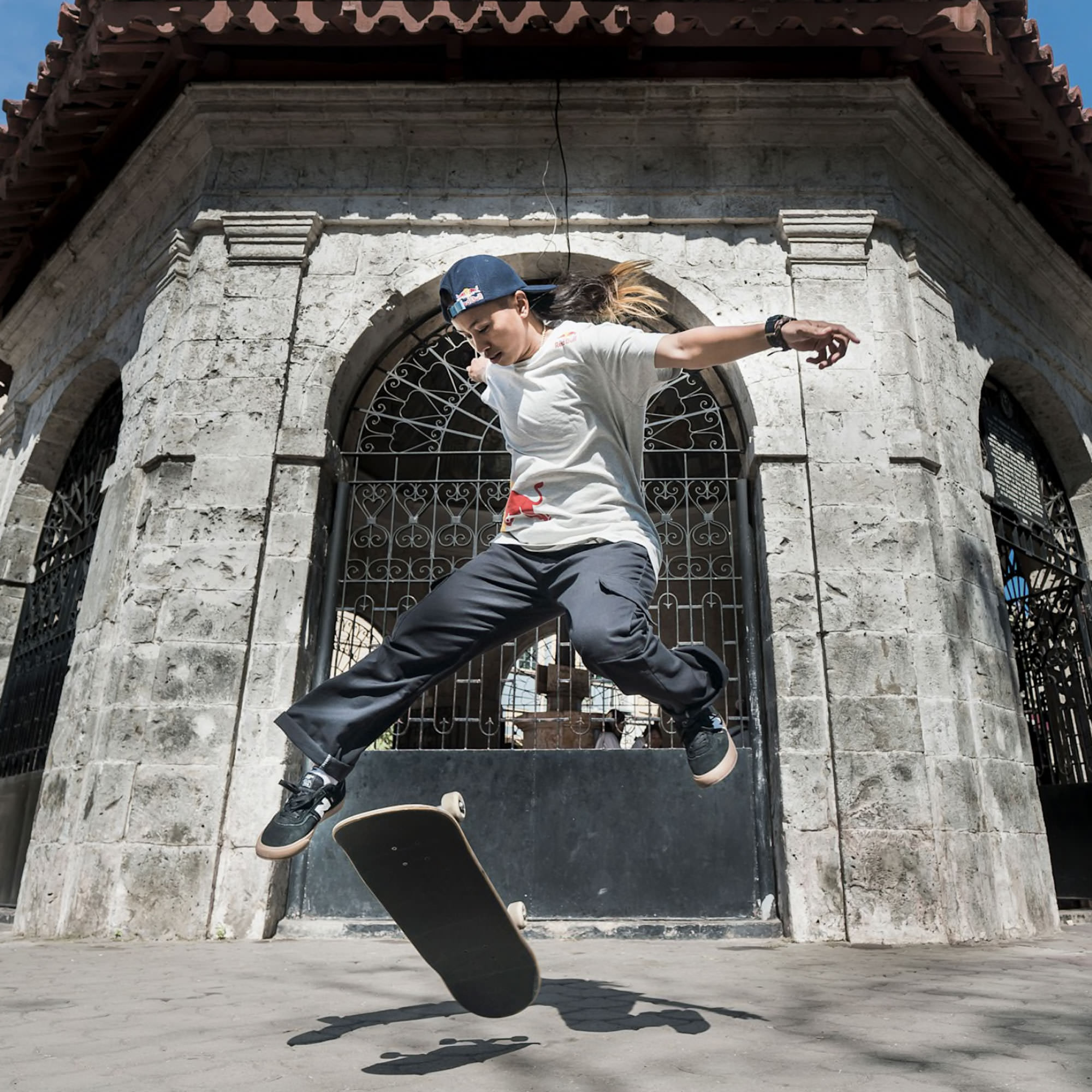