Aunty Skates Aims to Defy Stereotypes While Skateboarding In a Sari

Aunty Skates Aims to Defy Stereotypes While Skateboarding In a Sari

Oorbee Roy is a 46-year-old mother of two from Toronto, but once she's on a skateboard in traditional Indian dress, she becomes the social media sensation known as Aunty Skates.

Roy started skateboarding only three years ago, but it has quickly become a passion that she says has made her a better parent in addition to a TikTok star known for her uplifting presence.

"As a 46-year-old woman who gets into a bowl and skates in a sari, I want people to know that you can do anything you want," she told Craig Melvin on TODAY Tuesday. "Be kind to yourself and follow those dreams. Do that thing you thought it was too late to do. Do the thing that makes you happy. Aunty believes in you."

It's not every day you see a 40-something mom in traditional South Asian dress dropping in at your local skatepark, but it has been therapeutic for Roy.

"When I get on a skateboard, it is the most liberating feeling I've ever experienced, and whatever problems that I'm having in my life, they just go away," Roy said.

"And when I get in a sari and I start flying in the bowl, it's just really fun. I feel very lucky that I found skateboarding. I could have lived my whole life and never found it."

Roy first created an Instagram account to document her family skating sessions with her husband, Sanjeev Shah, and her children, Avnee and Rohan. She followed by creating her TikTok account in January as an outlet during the pandemic and has since amassed more than 112,000 followers.

"It was a particularly dark period for I think a lot of people, with Covid, and everybody just seemed depressed," she said. "People weren't even hiding it anymore, and myself included. Everybody's mental health was suffering. So I created Aunty Skates as a way to spread joy and positivity."

Roy had created the aunty character, who speaks in a South Asian accent, years ago while doing improv comedy. She wanted to use it to flip the script on the traditional scolding and imitate a judgmental but loving aunt to make her a more inspirational presence.

"I was getting on Instagram more, and I started following young South Asian women," she said. "And I started to notice that they were complaining often about aunty. Every culture has that toxic person in their lives, the person that tries to bring them down, the person that's always judging them, the person that says, 'Why aren't you married yet?'

"And every culture has that, my culture included, so why not be the person that builds people up? And that's why Aunty Skates was created specifically."

The joy Roy emanates while skating in her colorful sari has touched people of all backgrounds.

"From the 40-year-old man who used to skate as a kid and bought a board because of me, to the young girl in a village in India who said, 'If you can do it, I can do it,' it resonated with so many people in so many different ways," Roy said.

Roy embraced the sport despite her strict upbringing after her parents immigrated to the States in the 1960s.

"They didn't really feel comfortable raising a daughter in a new, more liberal country, and I think what happened was they kind of doubled down on their old school values," she said. "They were doing what they thought was best for me and they were setting some standards based on their own fears.

"And the great thing about my parents is that they learned from their mistakes," she continued. "Yes, I got a computer science degree. Yes, I worked on Wall Street. But that day that I called my father and told him I was walking away from this job, and he supported me and my mom supported me, I knew that I would always have my parents' support, no matter what crazy thing I did."

Her beloved father, Sumit, died this year, but he was a fan of Aunty Skates.

The man who got her into skateboarding in the first place was her husband.

"When I first started talking to Sanjeev, skateboarding came up right away," Roy said. "He told me he sprained his ankle skateboarding and he couldn't come and meet me, and that I should come and meet him. And I immediately asked him, 'Are you a pro skater?'

"I had no concept of adult skateboarding."

"She just fell in love with it," Shah said. "Next thing you know I get a text message of her dropping in on a quarter pipe, and like falling on her butt and laughing. I think that was it. That hooked you."

Roy has also used skateboarding to impart life lessons to her children.

"I've watched my kids' confidence grow so much as they skateboard, and they also learn a little bit about perseverance," she said. "You're not going to get something right away. It's not going to be handed to you.

"They see all the emotions I go through and they see me get through it, and they're mimicking that behavior now," she continued. "Sometimes (I see) people are at the skate park and they're a little bit nervous. And I always go to those people and say 'How are you doing? Do you need some help?' And now (my children) do the same thing too, and just the fact that they have compassion and empathy and that they've learned that, it makes me so proud. That's parenting 101, I guess."

Considering the anti-authority roots of skateboarding, some kids might not think it's that cool having their mom come skateboarding with them. Roy's children are just fine with people knowing their mother is Aunty Skates.

"People ask stuff, they're always like, 'Are your kids embarrassed of you starting the thing?'" Shah said. "And we're not. We're really proud of her. There's no reason to be embarrassed. If you have a super cool parent or a super cool mom, be proud of it." 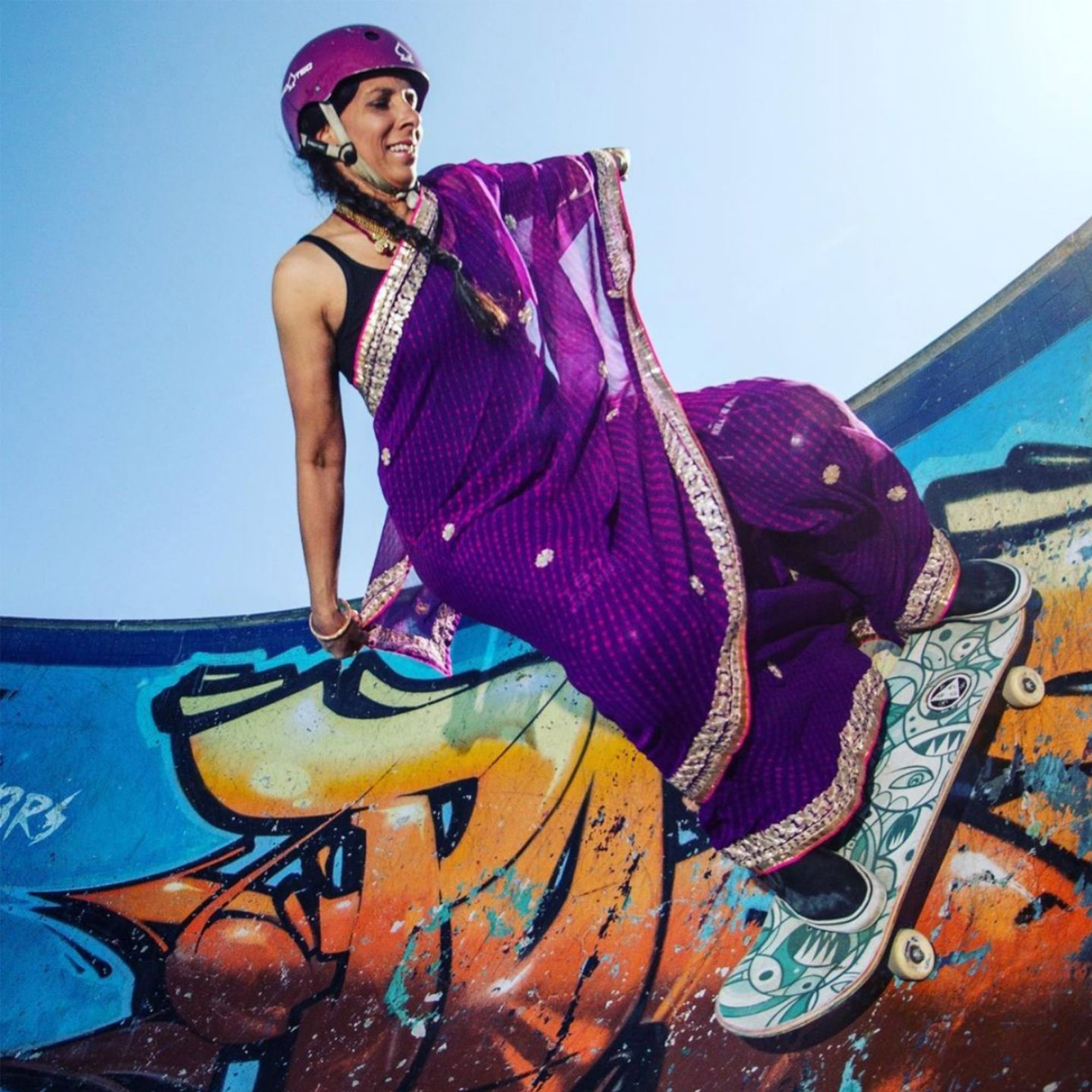