“Unity at the Initiative,” a sprawling exhibition of art and skateboarding, a seemingly incongruous pairing, was initially planned by the Asian Arts Initiative for spring of 2020.

“The show was originally supposed to go up last spring, as a big skate event,” said Anne Ishii, the imaginative leader of Asian Arts. “It was going to be public art and public events, it was just like a very fun outdoor event for the LGBT queer community.”

Jeffrey Cheung, a prolific Chinese American queer artist and skateboarder and founder of Unity Press and Unity Skateboard in Oakland, Calif., was the focus of the show. But, as with so much else, COVID-19 changed almost everything.

“Because of the shutdown and the multiple conflicts of racism against Asians and racism against Black folks … the option was: Let’s postpone the whole show until we can put it on exactly the way we wanted,” said Ishii.

Now, a year later, “Unity at the Initiative” is at last up and rolling until sometime in May (the closing date hasn’t been determined), and has taken over almost all of the Asian Arts complex on the north side of the 1200 block of Vine Street. Cheung is still an important element, but now “Unity at the Initiative” showcases new media, performance, and visual art by about two dozen of Philadelphia’s queer and trans artists of color.

There is even an indoor skatepark, complete with ramps and wheatpaste prints and street stickers.

That art and skateboarding are tied together is not all that unusual. Cheung has melded the two from a queer and trans perspective, making art another means of recognizing and communicating the body’s messages.

Ishii says that Cheung is fascinated by the how the body reveals itself through the jangle of riding a board.

“Skateboarding isn’t really about mastering these really technical tricks,” she said. “It’s just that when you’re riding on a skateboard you can feel your entire body, your skin vibrating and your body moving around. The actual beauty of skateboarding is when you fall and somebody picks you up. That’s why the representation of the body is so important, because I think, especially with younger queer people, your first introduction to your gender or to your sexual orientation is through your very own body. When the queer folks coming into their identities can meet in public in a place like a park and hold each other, and feel each other’s bodies in a very safe, platonic, beautiful way, you know that that is a manifestation of the kinetic energy and art.”

By celebrating skating, the exhibition becomes “another way we can honor the queer body during this time while we’re all separated,” she said.

More art is included in 250 “care packages,” which have been compiled by FORTUNE, a group focused on printmaking, service, and related activities for the Asian American community, that are being distributed to queer and trans artists and skaters, and others who sign up for one. Each package contains a several pieces of art contributed by exhibition participants — everything from stickers to seeds to soundscape tracks.

Cheung is still very much an exhibition focus, although the artist remains in California for the moment.

Not to worry. The Unity studio in Oakland has been reproduced in Philadelphia at the back of the Asian Arts complex facing tiny Pearl Street. The studio can be viewed at a social distance from outdoors through two enormous glass windows, giving the studio the aura of what Ishii calls “a diorama” of artwork and art making.

Toward the back, a mock-up of a risograph, a machine for making digital prints, is nestled in a corner.

Hanging from the ceiling are a number of works by Cheung, some depicting bright swirling bodies and others brief messages, a kind of DIY branding: Unity Queer Skateboarding!!!

Much of the work in this show is transitory; it is meant for the moment and then the moment moves on. Cheung and Asian Arts have invited queer and trans skateboarders to offer their own art for inclusion on the studio walls, with the caveat that all is ephemeral and nothing will be returned. It is a gift for a particular place and a particular time, perhaps to be remembered, perhaps not.

Next door to the Asian Arts headquarters is a studio space recently vacated by the Mural Arts Program. “Unity at the Initiative” has repurposed the space as an indoor skate park featuring skate furniture provided by the city, and walls covered by wheatpaste prints.

Collier, a writer of zines, a printmaker, and operator of Diasporan Savant Press, does not skate, but believes in the importance of the exhibition’s focus on trans, queer, and nonbinary skaters of color.

“I don’t skate but I know that the queer skate gatherings Unity puts on, which are free, all levels, and community-centered, are really crucial to making skater spaces more accessible to assigned female at birth people of all genders and QTBIPOC [Queer, Trans, Black, Indigenous People of Color] people, the same community this show is meant to uplift,” he said.

Artist Jeremiah Jordon, a self-taught chef and self-taught artist, is a former skater who is still a fan of the sport.

Jordon contributed four paintings to the show, each offering a brief window on what it has been like getting through the past year of national crisis.

“I know how important it is to be supportive of different communities,” he said. “I come from this community where it’s important to recognize that and just respect each other.” 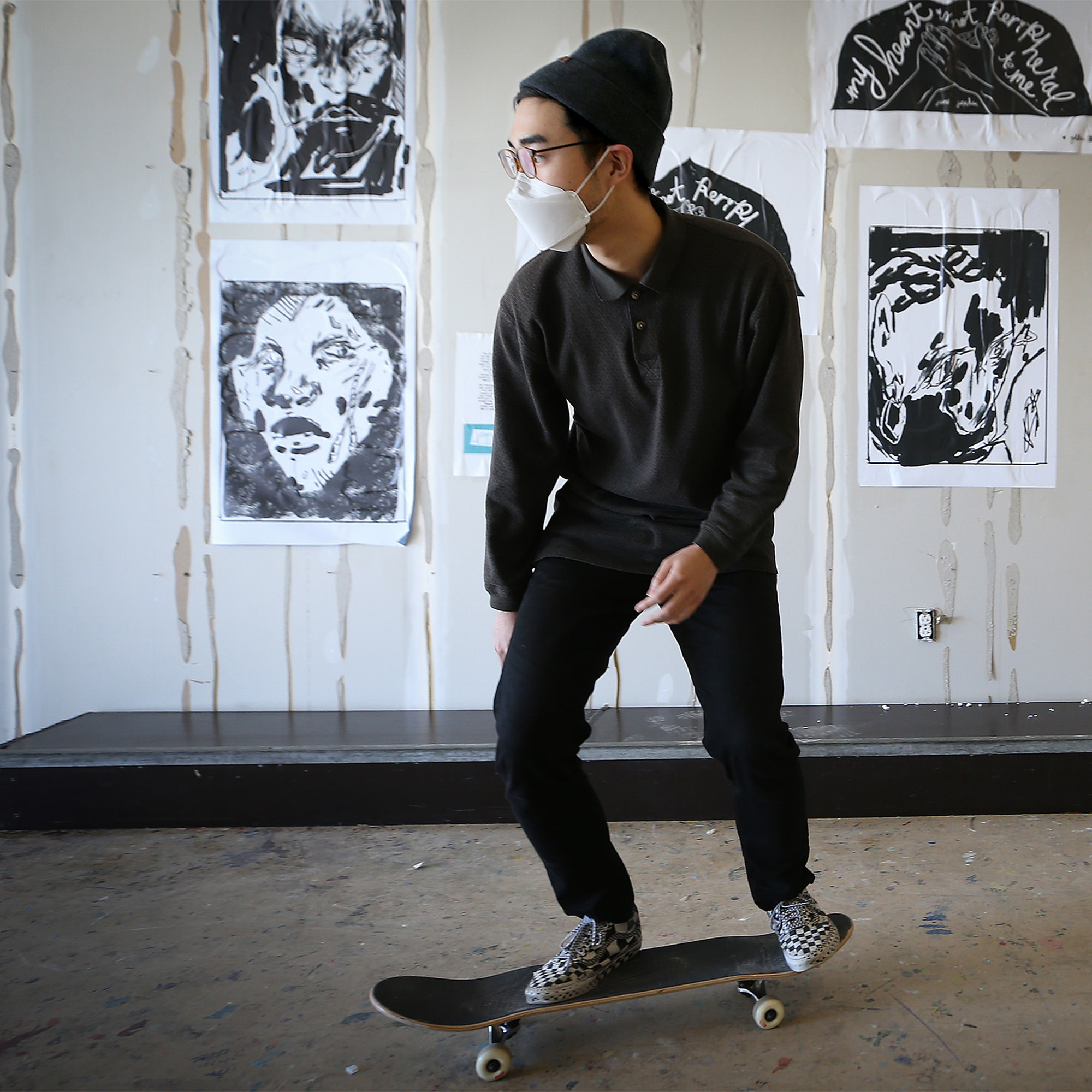