How AriZona Iced Tea Became a Cult Classic Among Skateboarders

How AriZona Iced Tea Became a Cult Classic Among Skateboarders

“AriZona Iced Tea has this ‘it’ factor that makes no sense,” says Crystal Moselle, writer and director of HBO’s new comedy series Betty, a show about young women navigating the predominantly male-oriented world of skateboarding in New York City. “It’s a strange phenomenon. Nina Moran, who plays Kirt, is obsessed with AriZona Iced Tea. She’ll wear an entire outfit with the green tea pattern. It’s this strange thing that their culture has hooked on that that I only know about through Nina.”

The pilot, which debuted in May 2020, opens with Kirt, played by real-life skateboarder Nina Moran, offering to bring a gallon of AriZona Iced Tea to the newly formed female meet-up at the skatepark. Kirt carries the plastic container during the first ten minutes of the episode, using it as a tool to make friends and diffuse awkward situations. Moselle wrote in the free product placement because she believes that it is a reflection of the real-life affinity Moran and other skateboarders have for the brand.

AriZona Iced Tea has been the catalyst for moments like these for the past 28 years. Its consumer still skews young, unbothered by the amount of sugar (21 grams per 8 ounces) in a 23 ounce, .99 cent big can. Its large size and cheap price point have made it easy to share among friends (life before adulthood and Coronavirus meant lax rules on hygiene). It is still the go-to choice on hot days for young adults on tight budgets. It rides along on bike rides, sits on the stoop, and continues to be passed around at the skatepark after hours of practicing tricks. The evolution of the drink has become synonymous with a good time.

Google AriZona Beverage’s founder, Don Vultaggio, and prepare yourself for an entertaining American Dream story. The 68-year-old Brooklyn native comes from a working class family, but made his $3.9 billion fortune selling the beverage without a cent spent on advertising or marketing for the first 25 years of operation. He nearly lost it all due to a decade-long battle with his former business partner. Vultaggio’s start-up story is easy to find, but the more elusive tale of how the brand became a cult classic among rebellious, anti-corporate skateboarders is harder to uncover.

Vultaggio had never been to Arizona when he decided to name his company after the Southwest state, says Spencer Vultaggio, Don’s youngest son and chief marketing officer for AriZona Beverages, on a recent phone call. His father played a word association game, connecting the desert state’s arid climate to thirsty throats, inspiring the name for his iced tea brand. The moniker was meant to conjure up images of a problem that Vultaggio’s product provided an easy solution. Ilene Vultaggio, Don’s wife, designed the logo.

At the time, the couple lived in an aquamarine pastel colored home and dabbled in arts and crafts. They kept their water cooler in a wooden box that had a zigzag, checkerboard pattern -- an exterior that inspired Ilene to create the yellow and teal design that the brand still uses today. Two years later, she created the teal and cherry blossom design for AriZona’s green iced tea. The iconic motif was inspired by a bottle of Ilene’s perfume and Spencer’s coloring books. The funky design became an emblem for skateboarders who didn’t take themselves too seriously.

I called professional skateboarder and Natural Koncept skateboard company owner, Josh Zickert, for some perspective. “AriZona has always been the beverage of choice [for skateboarders]. You looked and felt cool at the parks drinking it. And as a youngster, you got an AriZona, went to the spot, skateboarded, and had fun with your friends.”

This notion is largely because of the cheap price tag printed on the label. “As a little kid, I only had $2 or $3 bucks in my pocket,” says Cody Madsen, skateboarder and cinematographer. “Being able to load up on a tall ass drink with money left over to buy snacks, which lasted me all day at the skatepark, had me feeling rich.”

This sentiment is repeated multiple times by various users during an “Ask Me Anything” session Vultaggio did on Reddit in May 2020. Commentators praise the low sticker price and high value of the product, which led to it becoming a favorite staple during their childhood. The price was added to the packaging in 1998 after the company switched from glass bottles to aluminum cans as a way to stimulate sales. A spokesperson for the company says the price was also printed on the can as an accountability tactic geared at transparency for retailers to avoid marking up the price of the product. Keeping AriZona Iced Tea affordable was such a critical part of the company’s ethos that you can see it across its overall business strategy.

For its first 25 years, AriZona Beverages did not spend on marketing or advertising. Instead, Vultaggio funneled that money back into the business in order to improve operation costs and pass savings on to its customers. He purchased his own fleet of trucks to save on transportation, modernized production facilities to go from producing 150 cans per minute to 1,500 per minute, and thinned down the aluminum in the cans to increase profit margins. This focus on reinvestment has even kept AriZona Beverages from avoiding cuts to its workforce of 1,000 people during COVID-19.

Not oversaturating the market with gimmicky slogans, ads, or tv commercials gave AriZona credibility among skateboarders who Spencer Vultaggio says are quick to sense when corporate brands want to commodify and exploit their culture. AriZona and skateboarders developed an organic and symbiotic relationship in the 1990’s, but the relationship was formalized through Josh Zickert and Spencer Vultaggio’s friendship in the 2000’s.

The two met in 2007 and that summer, AriZona sponsored a 12-day East Coast tour for Zickert and his skate team. For the seven years that followed, AriZona bankrolled more skate tours, summer camps, and events for kids across the United States. Zickert and Spencer Vultaggio formalized their business relationship in 2014 after Zickert joined AriZona as skate team director. In addition to managing a skate team of eight, which is almost evenly split between women and men, Zickert works with AriZona’s designer’s to create skateboards, cruisers, wheels, and grip tape. It’s a unique subculture for a consumer packaged goods brand to dip their toes in, but perhaps it’s not as strange as it seems.

“Being relevant in skate culture is why we’re relevant in other ways,” says Spencer Vultaggio. “People associate us with good times, hanging out with friends and smiles. We’ve been .99 cents on the can for 28 years. If you have a dollar, you can always get an AriZona. We’ve been consistent for a long time. That’s what people come back for.”

Brand nostalgia might be what brings people back to AriZona Iced Tea, but the company is running proactive campaigns to stay relevant among skateboarders and the hypebeast crowd. In 2018, the company made its first foray into marketing ad spends. True to its roots, the money didn’t go towards a tv ad or fancy photo shoot. Instead, a pop-up store with tracksuits, bathing suits, windbreakers, dog accessories, and more appeared. All of the products came in the ubiquitous checkerboard or aqua/magenta design, and all of the products were priced at .99 cents. Its second pop-up, which included a .99 cent shoe collaboration with Adidas, had people lining up 12 hours before opening.

The brand doesn’t take itself too seriously, and in doing so, it has found an audience that is still serious about having a good time, regardless of the season. 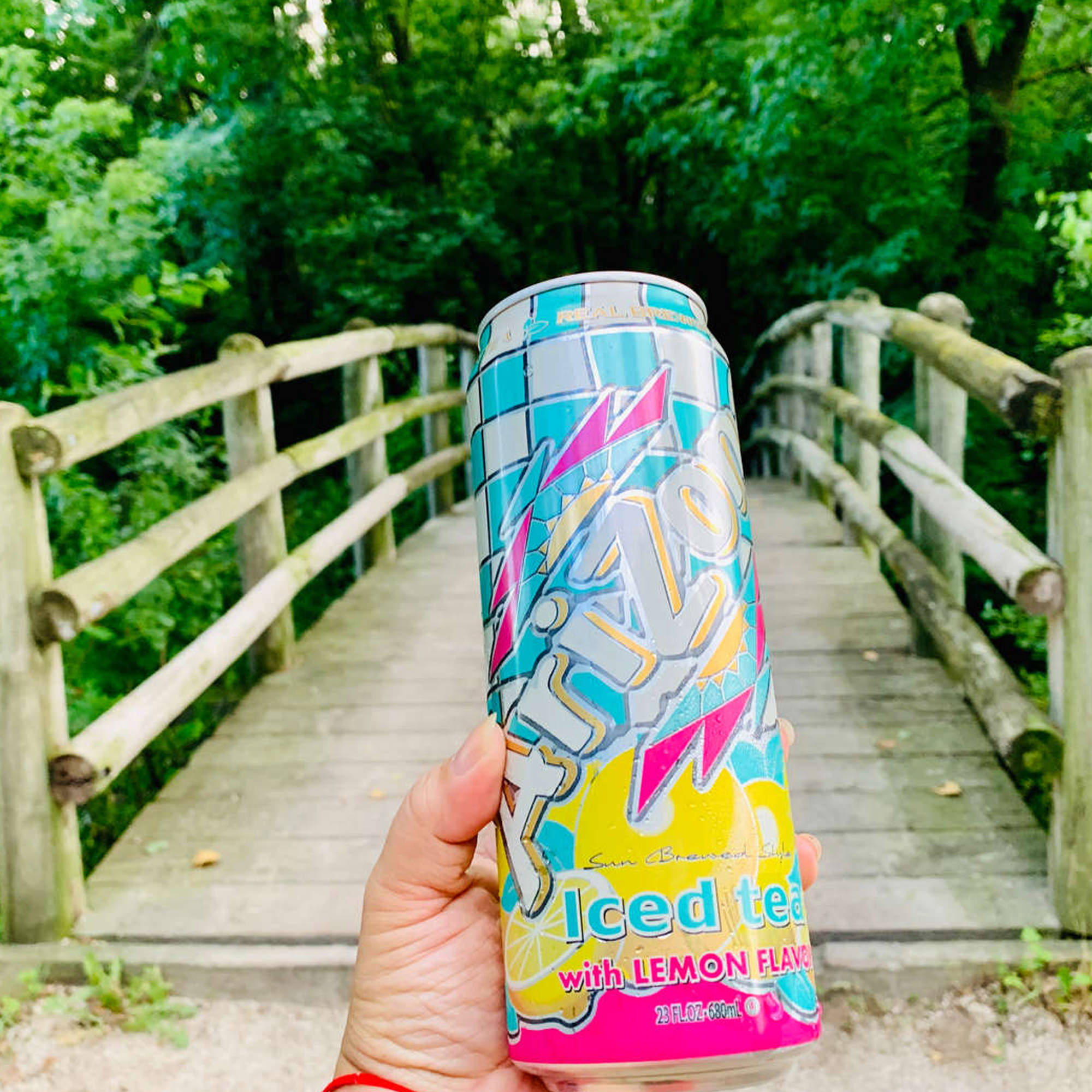