Against All Odds, Baghdad Now Has a Flourishing Skate Scene

Against All Odds, Baghdad Now Has a Flourishing Skate Scene

“When we cross a checkpoint in Baghdad,” said 16-year-old Muhammad Al Kaabi, “soldiers stop you and say, ‘What the hell are you doing? Where do you think you’re going? Get lost.’”

Muhammad is a high-schooler from the Adhamiyah neighbourhood in the Iraqi capital’s northwest. He skates the hilly area between his home and the Save Iraqi Culture monument in the city centre, meeting weekly with a group of about 60 young skaters.

The group was set up by skaters Hussein and Abbas, 22 and 19, about a year ago (skateboarding isn’t viewed positively by conservative members of Iraqi society, and they asked to keep their surnames anonymous). The pair created an Instagram account and WhatsApp group to organise weekly skates in Al Thaqafa square, next to the Save Iraqi Culture monument, and other meet-ups throughout the city. They skate on the dilapidated roads of Baghdad, which haven’t been fixed since the US invasion in 2003, amid monstrous traffic jams and the innumerable checkpoints set up to protect the city from terrorist attacks.

“Not long ago, we were struggling to stay upright and couldn’t do tricks,” Muhammad said, his board clutched tight against his chest. “But this year, we managed to get the whole skating community together here [in Al Thaqafa square], where we can skate in peace without people staring.”

Young Iraqis have grown up in a country disfigured by the US invasion, religious wars and ISIS violence. At barely 20 years old, many have already encountered death more than once, losing family members or friends. They’ve been exposed to the human rights violations perpetrated by US soldiers during the occupation, and experienced the subsequent anti-American sentiment. Despite this, they’ve gravitated to a sport synonymous with the US.

Abbas, a student at the Baghdad College of Fine Arts, began skating at the age of nine. “When I started skating, I had no idea people were going to make fun of me – in the street and at school,” he said. “People told me skateboarding was a Western thing, but I kept learning, despite the insults.”

He wishes Baghdad had a spot where skaters could practice without danger. “Passersby come and destroy our skates,” he said. “There are aggressive drivers who floor their cars to scare us or hurt us on purpose. Not to mention you get hurt a lot, because the roads are a mess.”

In Al Thaqafa square, the group cheered as skaters did tricks, yelling, “Yalla shabab!” or “Go youth!” in Arabic, while others chatted and chain-smoked.

Haider Ramadan, 18, is originally from the Shiite suburb of Husseiniya, bordering Baghdad’s poorest district of Sadr City. He came a long way from his traditional and religious neighbourhood to spend a few hours skating with friends. “I’ve had a lot of problems skating on the streets of my neighbourhood,” he said. “Society just doesn’t tolerate skaters.”

Haider said skating helps with his mental health. “This year, hundreds of people our age were killed in the protests. Some were our friends,” he said.

On the 1st of October, 2019, thousands of Iraqis, most under the age of 30, came out to protest against the corrupt oligarchic regime installed after the US military killed Saddam Hussein. They were met with violent repression by the authorities, who shot at them, killing over 420 people and injuring 17,000. The protests started with demands for better services and jobs, but were later complicated by the assassination of Iranian general Qasem Soleimani – a powerful yet divisive figure in Iraq – in a US drone strike.

Haider said skating helped him cope with the stress and “the violence of a government that represses young people with blood”. Sitting in a grassy corner, his friend Muhammad agreed. “I fell in love with skating because it’s my only escape,” he said. “I found my family.”

Hussein got his first board in 2016, but said it’s hard to make progress without the right equipment and a dedicated space. “There’s no place where you can practice more complex tricks,” he said. “That keeps us from getting any better. It keeps us from making ourselves known in the global skateboarding community.”

He recently had the opportunity to ask the Iraqi Ministry of Youth and Sports for a skatepark in Baghdad. A representative promised one would be built in the coming months. “We’re not necessarily hopeful,” Hussein said.

Iraq also has restrictions on imported goods, which make skateboards expensive and hard to come by. A US or European-produced skateboard costs about Ł230, making it totally unaffordable for the average person. Instead, skaters usually buy counterfeit copies of the real deal made in Iraq.

“A lot of skaters have accidents and get hurt because of their boards,” Muhammad said. “But we don’t have much choice.”

In Baghdad, there’s also a shop selling second-hand skateboards used by Europeans. “The prices range between $10 and $50 [Ł7.50 to Ł38] – that’s the best price-quality ratio you’re going to find,” Muhammad said. Others, like Ramadan – who dropped out of school and is currently unemployed – share their board with a friend.

Tabarek, 16, is still in high school. She started skating three months ago and now regularly comes to the weekly group meet-ups.

“My family supports me, but that’s not the case for all girls,” she said. “Society doesn’t approve of women doing outdoor sports.”

At first, she was nervous about being surrounded by guys, but she said was welcomed and embraced by the community. “Now I feel at home here,” she said. Muhammad and the others hope more skater girls will join. “We want more diversity in our community, but sadly, social customs really hold them back.”

During the October revolution, street artists painted graffiti on the central Tahrir square, which became the centre of the revolution. The Baghdad skaters joined the protests, too.

“We skated during the revolution to demand political and social change,” Muhammad said. “We wanted to change people’s mentality, make society more open to the world.” 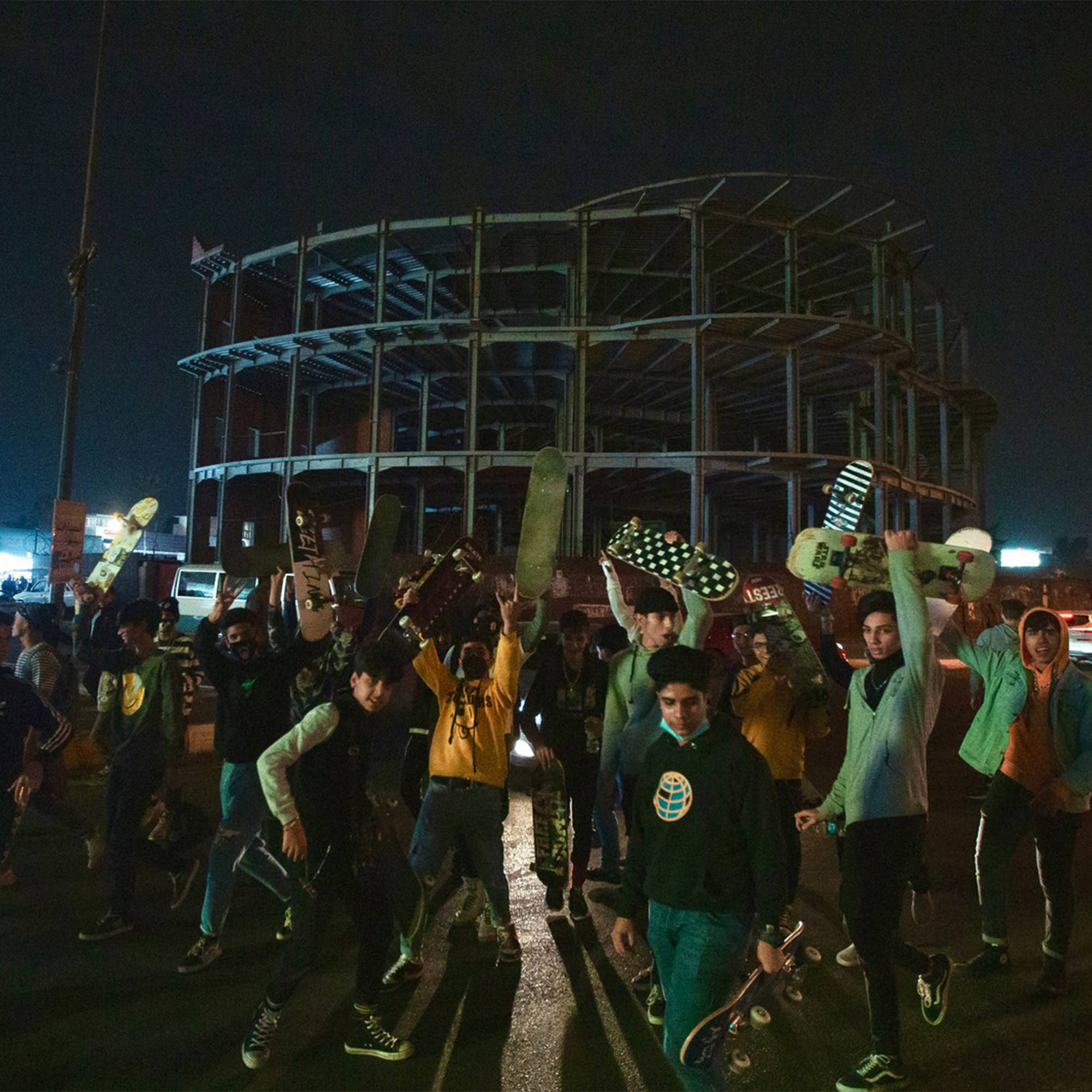