16 Things I Learned From Writing About Skateboarding

16 Things I Learned From Writing About Skateboarding

In my experience, writing about skateboarding and digesting skate culture daily falls under a similar dynamic. I can’t pretend to be interested in you and your stories of riding a skateboard if I am no longer addicted to riding one myself. No matter what your skill level or physical limitations—don’t stop skating. It’s the one sure thing you will have in common with every person, place, and thing you will be writing about.

Why are you writing? For myself, in the beginning, I was heavily influenced by Big Brother and the deadpan sarcasm of “The Simpsons,” specifically Phil Hartman’s Troy McClure.

I got my first writing jobs through Pat Canale, who worked for Big Brother, and I adopted the Big Brother M.O. wholesale. The only real motivation was to write something that made people laugh. The more shocking the funnier, and the more sarcastic the better. There is nothing wrong with this approach. I still love it. But after a few years it inherently plays itself out. You can only one-up shock value so many times. Deadpan can only get so dead.

Somewhere along the way, I was forced to examine what other motivations there might be. You can certainly write about all the things that you hate. You can also straight whore it up and let the (very small amount of) money you earn be your motivation. But in the end, the best motivation—the only way to do it for the long haul—is to write about the things you love. Even if it’s still a good idea to make people laugh along the way.

3. “GIVE THEM WHAT THEY NEED, NOT WHAT THEY WANT.”

Mofo said it best. Live by this code. They need to know what they need before they can know what they want. Your job is to educate the masses and, hopefully, turn them on to the good stuff.

4. SOMEBODY ELSE ALREADY WROTE IT.

Iconic tricks done in the rain? Genius. Best acting performances in skate videos? Hilarious! 10 Best 360 flips of all time? Groundbreaking! What about switch!? You deserve a Pulitzer! Make sure to title all your interviews, “The so-and-so Interview”—because clearly yours will be the definitive conversational offering from said so-and-so.

If I’ve learned anything over the past 20 years it is that virtually everything has already been done. Walk humbly and know that you are treading where others have trodden.

5. THERE IS NO SUCH THING AS WRITER’S BLOCK.

I’ve come to believe the theory that it’s just your ego messing with you. You’re not really blocked, you’re just afraid it’s going to be bad. Battle through your fears, real or imagined, and accept whatever comes.

Back in the before times, magazines would either pay writers per word (anywhere from $.25 to $1), a flat rate per story (around $100 to $2K), or if you were lucky enough, a salary or stipend per month ($500 to $6K with or without benefits) with a loose agreement on month-to-month duties.

I have worked under all three arrangements through the years. Each has its advantages/drawbacks but obviously a steady monthly check with benefits is generally the best option to shoot for (but also the most difficult to land).

7. SKATEBOARDING IS STILL THE MOST INTERESTING SUBCULTURE ON THE PLANET (TO ME).

As strange as it is, the older I get, the more I learn about skate history and the “real” life at large, the more I realize the value and uniqueness of what we have. All the corny stuff is true. Skateboarding is still the best. I love it more now than when I started.

Yes, your job is to be semi-cognizant of the happenings in our world. However, over the past two decades, those happenings have multiplied in frequency one hundredfold with the arrival of broadband internet, YouTube, smart phones, etc. Simply put, the daily amount of skate content disseminated on any given day in 2019 would probably surpass the entire year’s worth of skate content released in 1999.

Be aware of the broader strokes and certainly seek out anything and everything that interests you. But I’ve learned that it’s best not to force-feed yourself every last bit of content under the sun. You might end up extremely well informed, but you’ll now hate skateboarding, your job, and your life.

In my early days on a masthead, I felt the need to hoard as much free product as possible. Brands sent out catalogs, mag editors circled everything they wanted, resulting in a fat package landing in your cubicle come Monday.

I made it my mission to strategically request every possible piece of product released. This strategy first hit a snag in ’04 when I had to move and realized my entire apartment was packed with deadstock skate product. To this day, there are still unopened boxes of Clae Shoes and Wet Willy bearing dispensers sitting in storage.

A second problem arose when those same generous manufacturers and advertisers wanted some sort of return. It slowly dawned on me that the old adage, “Nothing in life is free,” also applies to boxes full of Oakley promo.

Finally, at some point I also realized I could support the industry that has so graciously supported me all these years. Sure, if you really need products to skate, it only makes sense to ask for a set of wheels, pair of Vans®, or bearings here and there (I love you, Vern). But if I can afford it myself, today I buy product, supporting the brands I love, at a local skate shop that I don’t want to ever see close.

There is a simple metric I have come to use when brainstorming article ideas. Does it make skateboarding culture better overall? Is it a net positive? Does it add value? If so—all good. If not—skip it.

11. TRANSCRIBE YOUR OWN INTERVIEWS.

During the initial conversation, you are usually trying to keep on track with questions, keep the skater comfortable, and formulate follow-ups. Many times, I don’t hear what a person is truly trying to get across until that second listen. It might not change the interview itself, but it’s the best way I have found for writing the intro text—the part where you really try to get across your subject’s personality.

Transcribing forces you to focus on every syllable. And writing it out also allocates their words to a more long-term storage area in your brain. Dialogue amongst skateboarders usually revolves around the same basic vocabulary. However, it is in the emphasis on certain words that the true communication occurs. Without hearing them, the text itself might have a completely different meaning.

While a plethora of automated options (and interns) now exist to skip the traditionally loathed drudgery of transcription, I still recommend DIYing.

Over the years, I have learned to love them. They give my life structure and help me gauge when to wrap up a piece and stop editing. At this point, writing without a deadline is far more terrifying than having a due date on my calendar.

Some of them are the most amazing people on the planet. Some of them—not so much.

Skate culture is a shared story we tell, made up of myths and heroes (Cardiel, Penny, Jake J, Gall, Gino, AVE, TA, Gonz, etc), mostly true but certainly embellished at times. We all need to buy into it on some level to make the whole thing work. Our ideals are written into those myths and heroes. They are the examples we hold up for others to follow.

Yet, whatever hero worship and myth-making you bought into as a consumer of skate culture, your job is now to work behind the curtain, where you will be privy to a healthy dose of reality.

Should be a no-brainer really, but there were at least three TWS Pro Spotlight interviews I didn’t remember conducting the morning after they were conducted. But you can be sure that those I interviewed remembered. As did my editors and the advertisers.

Alcohol affects us all in slightly different ways. To each their own. But for myself, I’ve learned I do a lot better writing about skateboarding whilst on the wagon.

Honestly, the hardest thing I’ve grappled with the longer I’ve done this is maintaining that it’s important to be spending so much time and energy dissecting skateboarding.

Is it trivial? Are we wasting precious time and resources writing about the 2005 iPath summer promo that could have been devoted to solving climate change or curing cancer? Perhaps.

But I look at it this way. If it makes us happy, it has value. If we love it, it is as real as that love. And with some love and happiness in our hearts, we might just solve climate change and cure cancer too.

This was supposed to be a nod to Skateboarder’s classic “15 Things You Didn’t Know About ____.” After consulting my former colleagues, I realized using the exact same name might be misleading. So welcome to Jenkem’s “16 Things,” the 7-Minute Abs of “15 Things” columns.

I’d like to give a big thanks to every magazine, editor, and publisher that ever supported my writing. 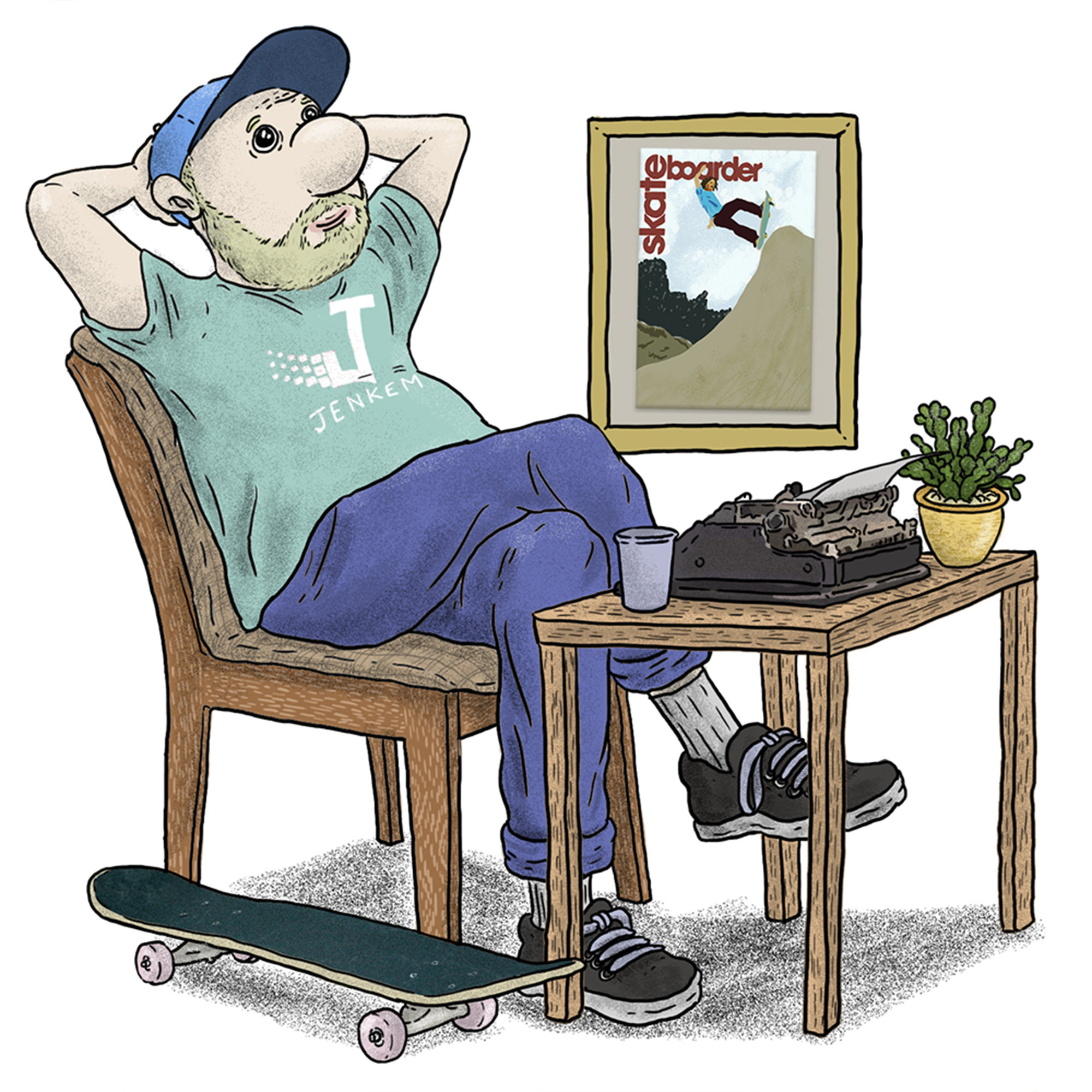