But he went to physical education class one day and there was the opportunity. He was confused at first. How to turn and shimmy on board as it's moving.

“Then it just clicked,” said the third grader. “It’s kind of like riding in a car but you’re doing it yourself, like you’re the actual car.”

The confidence he has gained has made him want to be better at riding his bike. When kids become more adept at sports, their self-esteem rises.

“It makes me feel more athletic,” he said.

That’s exactly the kind of experience his P.E. teacher Jason Goldsberry wants his third-, fourth- and fifth-grade students at Eagle Crest Elementary in the St. Vrain Valley School District to have. He partners with Square State Skate to bring experienced instructors into three of his P.E. classes.

The instructors teach more than the physical skills of how to skateboard. They talk a lot about awareness of your body and the space around you, respect, responsibility, determination and empathy.

Instructor Gray Tattershall stands in the middle of a circle of wiggly kids in the gym.

“So, when I am standing on my skateboard in this stance it is called?”

“And I’m going like this (makes motion), it is called?”

In this four-lesson P.E. program, which aligns with Colorado’s physical education standards, kids start right at the beginning. Proper stance on a board on the ground with no wheels. Then gradually moving onto the board. Pushing off. Rolling. Turning. Stopping. Balancing. Stopping. They learn how to fall.

“We almost show off our falls more than our successes,” said instructor Finn Murphy. “There’s no other sport that really does that.”

Outside on the school blacktop, safety is the top priority. Instructors pay close attention to kids who need extra support. Some of the kids will still hold onto an instructor’s hands as they tentatively learn to roll faster.

“If you still need help, I’m here to help you,” calls out an instructor.

Ruby Bran Caldwell, 8, was one of the kids who’d never tried skateboarding before. At first it seemed scary.

“’Cause like you’re on two wheels and you don’t really have things to support you and like when you first go on pavement, you feel like you’re going to fall really quickly.”

“It feels like maybe you're kind of on a surfboard but like with wheels and you’re not really on water.”

‘Those are the kids that I don't want to remain out on the periphery.’

Each class divides into two loose groups. Some are working on going up and down a ramp and a second group of kids with a little more experience are ollying — jumping into air — over a broom on the ground.

“The most challenging thing about skateboarding is to not take a spill,” said fifth-grader Adrian Brown. “It’s just really hard to keep your body on the board.”

But eventually, kids get it and the next thing you know, Adrian is working on his “ollie.”

“Everything just changed,” he said of his progression in just four days of classes. “It’s really fun. It’s made me more confident. It helps me with my fears.”

Veteran P.E. teacher Goldsberry noticed over the years that kids who don’t excel in traditional sports like baseball, football or basketball, want to showcase their athleticism and their love of movement in a creative, artistic way.

“Those are the kids that I don't want to remain out on the periphery,” he said. “I want them to be involved.”

Ropes courses, Ninja Warrior obstacle courses, and skateboarding are the types of gym activities that allow all kids to reach goals at their own pace.

“It’s a very personal progression. You’re not comparing yourself to other people who are taller and bigger than you. It’s about ‘what did I learn today and what did I learn as a skateboarder?'”

‘The fire was burning inside me’

Each time 9-year-old Distefano Chirinos learns a new trick, he gets so happy. Very happy. Like how happy?

The hardest thing about skateboarding is after weeks of trying a trick, “and you just can’t do it,” he said, pounding his hand on the table.

But a lot of skateboarding, he’s learned, is in the mind.

“You have to commit,” he said emphatically. He tells me about one of those times. It was his first time at a skatepark.

“I was so excited, I felt that feeling. The fire was burning inside me. I was like, ‘let’s go!’”

Another thing skateboarding has taught him.

“It’s changed me to be a little patient-er. I’m still not patient. But I’m a little better.”

The four-day program goes beyond physical skills. It also teaches values like empathy.

Square State Skate instructor Blake Wagner said inherent in skateboarding is this sense that everyone started in the same place, so when someone tumbles, people in the skate park are more apt to offer you tips than teasing. For him, the sport gives kids lessons about life, that if you don’t try and fail, you’ll never grow and learn.

Rene Garcia, 10, appreciates the way the sport lets him learn and grow on his own.

“It feels like I’m free and I’m able to do something on my own and have some space.”

Nine-year-old Kate Pickels watches a classmate almost tumble and talks about how she's learned about empathy.

“When someone falls, like, you know how it feels and you try to help them feel better.”

And she’s learned that falling is really not that bad.

“When you do fall, it kind of feels good in a way. It’s kind of like ‘relieve-ing’ ‘cause you know if you fall again, it’ll feel just like that and didn’t hurt that bad.”

“I think it’s made me not afraid to try new things.” 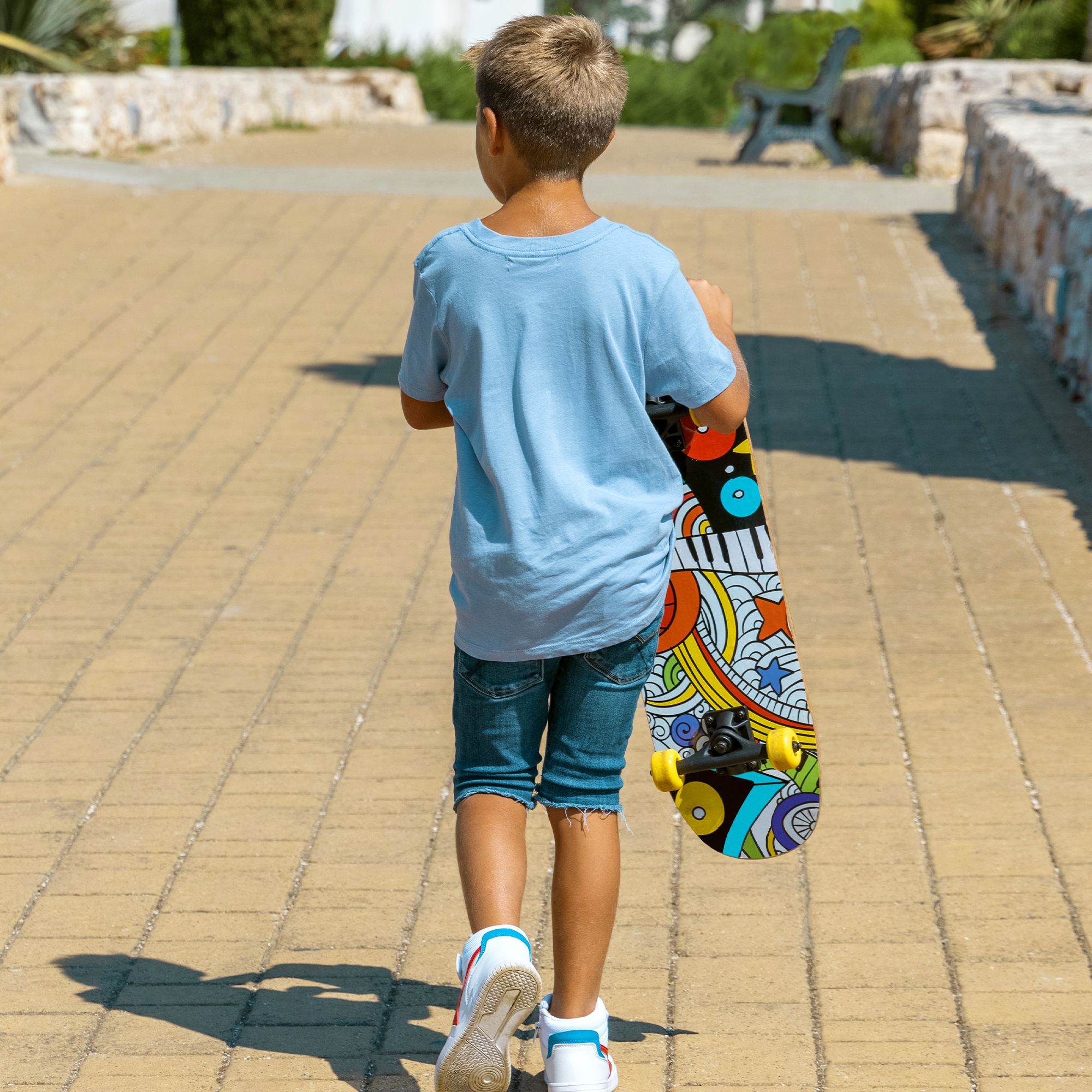